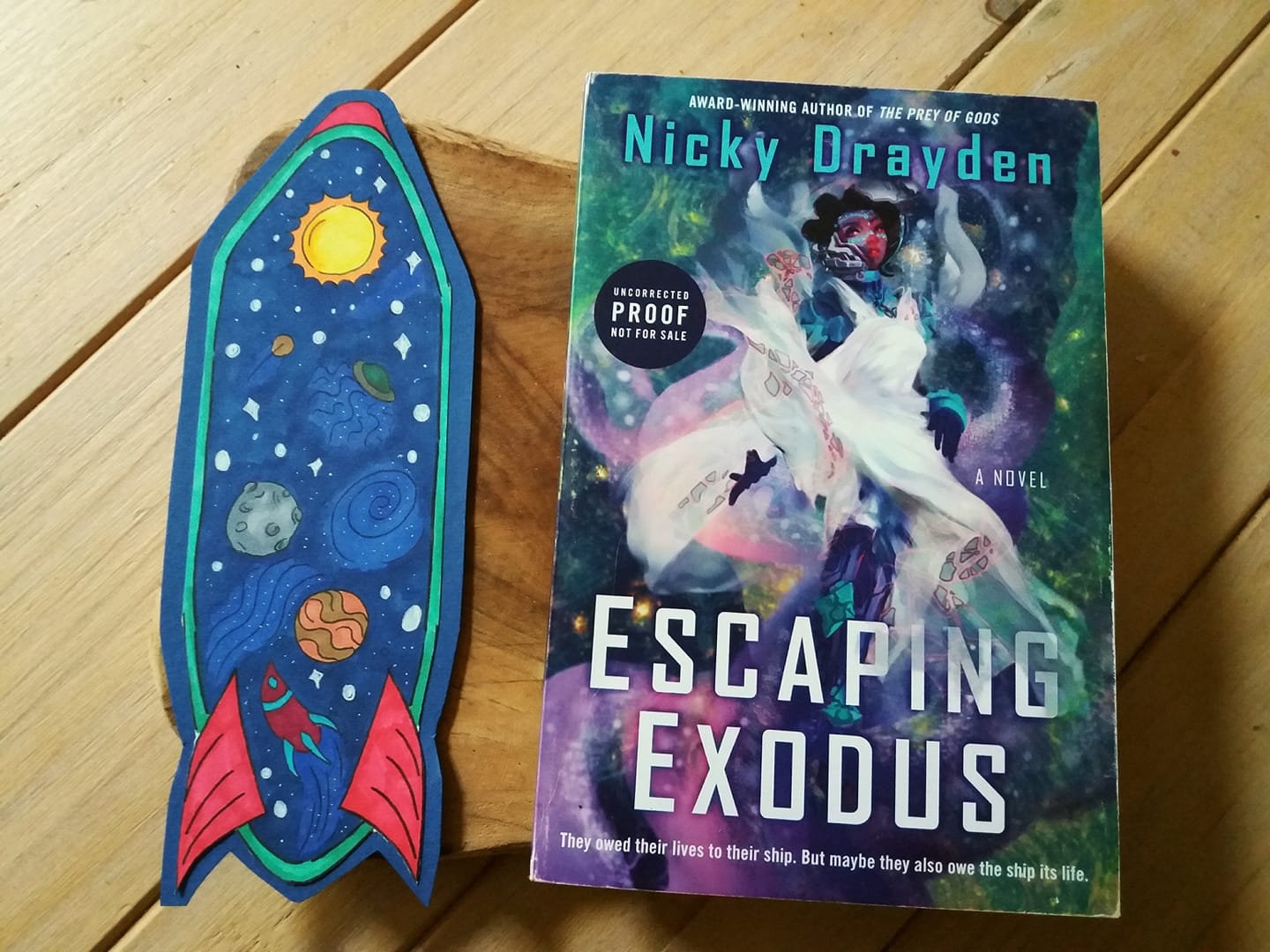 I received this arc through a giveway from The Captain’s Quarters during Sci-Fi Month 2019. Thanks again, captain!

The bookmark is one I created and you can buy it here.

Escaping Exodus is a story of a young woman named Seske Kaleigh, heir to the command of a biological, city-size starship carved up from the insides of a spacefaring beast. Her clan has just now culled their latest ship and the workers are busy stripping down the bonework for building materials, rerouting the circulatory system for mass transit, and preparing the cavernous creature for the onslaught of the general populous still in stasis. It’s all a part of the cycle her clan had instituted centuries ago—excavate the new beast, expand into its barely-living carcass, extinguish its resources over the course of a decade, then escape in a highly coordinated exodus back into stasis until they cull the next beast from the diminishing herd.
.
And of course there wouldn’t be much of a story if things didn’t go terribly, terribly wrong.

Gosh I don’t even know where to start with this one. It is a bit of a wild ride. Sometimes good. Sometimes not so good. When the synopsis says things go terribly terribly wrong, they weren’t kididng.

This story follows two young ladies from different stations of life within their community. Seske is the daughter of the leader, titled matris. Adalla is a beast worker. For surivival their community lives inside big space beasts to survive. They use up the beasts, put the important people in stasis and then go on to the next beast, and wake everyone up once the beast is ready to live in. But this beast isn’t cooperating. And it will take all they have to preserve their way of life. Or do they need to?

I thought this was just a really interesting take on a space opera and living out in space. Living in space beasts as a community. Living in a living thing and how that works is mighty interesting. But it was also partially the downside as I never felt I got enough background, enough explanation and I was just grasping at straws here to feel like I even knew what was going on. We got a small explanation at the end but that was too late and not enough.

Another great aspect in this book are how the community and families work. The society is matriarchal which means that the females are all in charge. The men basically nice arm candy, and not always even that. That is a gross exageration, they do have their roles to play. But here the men are looked down on and are sometimes seen as not capable the way the men in our society can view women. I think that is a nice eye opener for some men as they read this.

The families are intricate. There is the head female and their partner (either male or female). And then there are various spirit and heart mothers and fathers that fill up the family. The children don’t grow up with just the two parents which is quite interesting. There don’t seem to be any romantical or sexual relationships allowed between most of these, but I am not a 100% sure. There was simply not enough room within the 300 pages to explain. I wish there had been.

Next to the world building leaving me stranded in places, there was something to be desired with how the second half of the book went. There was such a strong set up going on for various story lines. The beast not holding up, two rebellions and one stab in the back and so on. But a lot of it got forgotten to be wrapped up in the end. None of it was properly dealt with. And then there was the whole tenticle sex thing that I could have honestly have done without. It was used to ‘fix’ something but there were so many other ways.

The ending just didn’t work I am sad to say. However I do see that there is now a second book coming out in 2021 as a continuation I suspect. Part of me wonders how this will be continued and then another part of me has yet to decide if I am even at all interested in reading on.