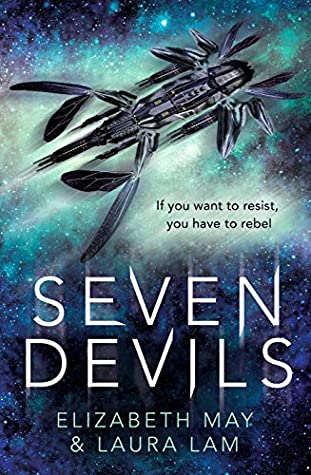 Thank you to Gollancz and Orion Publishing Group for the review copy in exchange for an honest review. This does not change my opinion in anyway.

When Eris faked her death, she thought she had left her old life as the heir to the galaxy’s most ruthless empire behind. But her recruitment by the Novantaen Resistance, an organization opposed to the empire’s voracious expansion, throws her right back into the fray.
.
Eris has been assigned a new mission: to infiltrate a spaceship ferrying deadly cargo and return the intelligence gathered to the Resistance. But her partner for the mission, mechanic and hotshot pilot Cloelia, bears an old grudge against Eris, making an already difficult infiltration even more complicated.
.
When they find the ship, they discover more than they bargained for: three fugitives with firsthand knowledge of the corrupt empire’s inner workings.
.
Together, these women possess the knowledge and capabilities to bring the empire to its knees. But the clock is ticking: the new heir to the empire plans to disrupt a peace summit with the only remaining alien empire, ensuring the empire’s continued expansion. If they can find a way to stop him, they will save the galaxy. If they can’t, millions may die.

Seven Devils is that one Sci-Fi book that I really looked forward to this year yet when I got an e-arc it took me forever to pick this up. I was so scared I wasn’t going to love this. And I wanted too so much. I hadn’t read anything by either author before and I have such high hopes for them as far as authors I’m going to like. So those are high expectations to fill already. But I am pleased to say that I really enjoyed this book.

Seven Devils starts us off with the focus on two characters, Eris and Clo. Both are a part of the resistance and there is some animosity between the two of them. Yet they are forced to go on a mission together. And from there it just goes from bad to worse.

The whole casts is five but it isn’t until Eri and Clo meet them do we get their point of view. That worked incredibly well because it allowed us time to get into the world and two other characters first before we had to get to know three others. Too many point of views from the start can unnecessarily slow down the progress of a plot because so many things have to get told first.

There are some flashback throughout the book and a first that didn’t work for me but as we got deeper into the plot and we got to know the characters, the more invested I became in their history. In understanding where they came from. And quite frankly they call kicked ass. I think though that Ari grabbed me the most. I think that is just my feeling as a mom.

I’m really looking forward to reading the rest of this series and more by these authors.