A bit ago I saw this feature Alphabeticals over on Nicole’s Book-Wyrm-Knits. I thought that looked like a lot of fun, and since I haven’t had the time nor the energy to do a book shelf tour this year I figured I’d go through some books on my shelves this way.

Alphabeticals is originally created by Alex from The Paperback Piano. With Alphabeticals you can showcase your favorite Authors, Books, Characters and (book) Series that start with a certain letter of the alphabet. You can do this all at your own pace and you can do as many or as few letters as you want.

Since I’ll be doing this to replace my bookshelf tour I am going to stick to the books I actually own. I will do a mixture of read and unread books (depending on how easy the letters makes it) and drop the favorites part of it. I think this will be a fun look at my book shelves. I might end up making more or less photos depending on the time and letter. I only have so much time. And it will take a while to go through everything as this is more likely to be a monthly thing.

Starting us of with Authors whose first name or last names start with an A. I decided to just go for both. 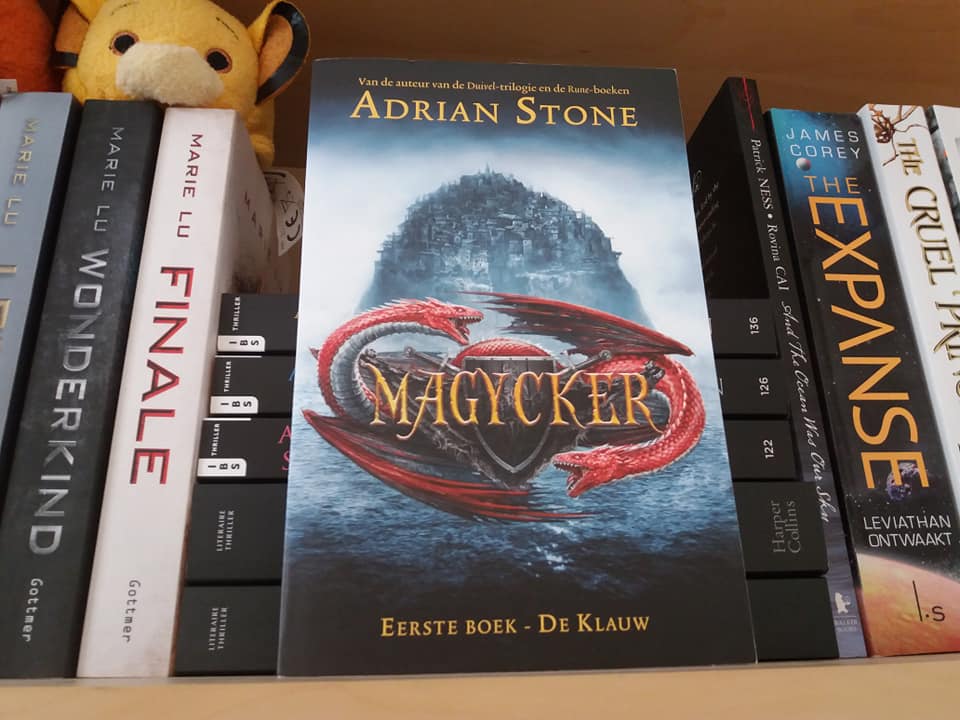 Adrian Stone is a dutch author and the name is his pen name. His actual name is Ad van Tiggelen so still an A! Magycker is the one book of him I’ve read but I have more of them on my shelves. I actually met him last Summer during Castlefest 2019 and got this copy signed. 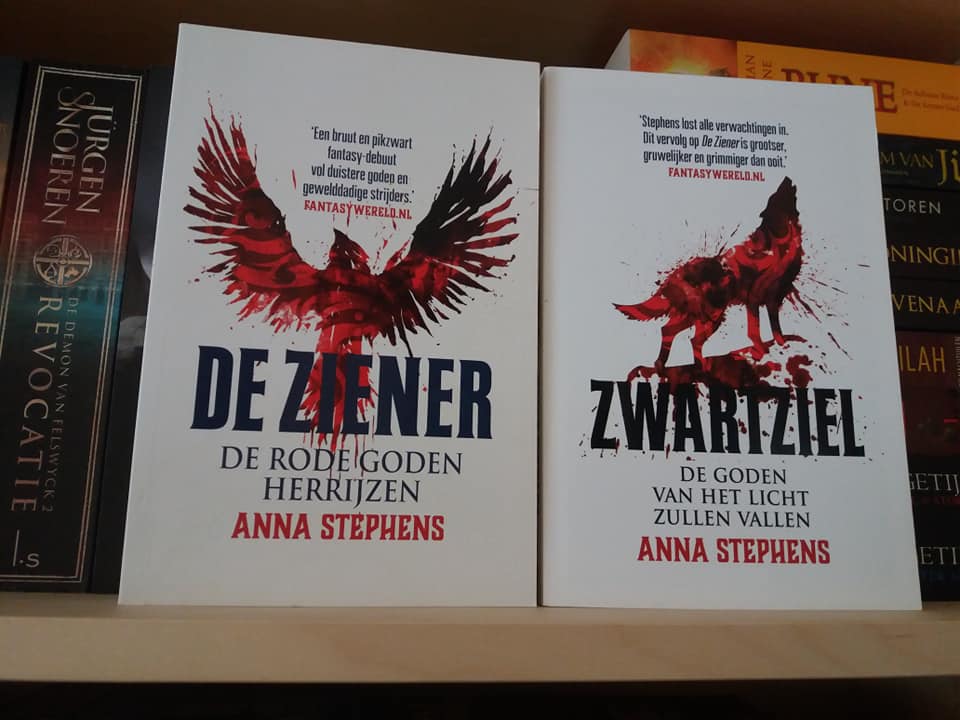 Anna Stephens is the author of the Godblind trilogy. These are the Dutch editions of books 1 and 2. I hope book 3 will also be translated but so far I haven’t heard anything. I’ve been holding out on starting these until I have it complete. 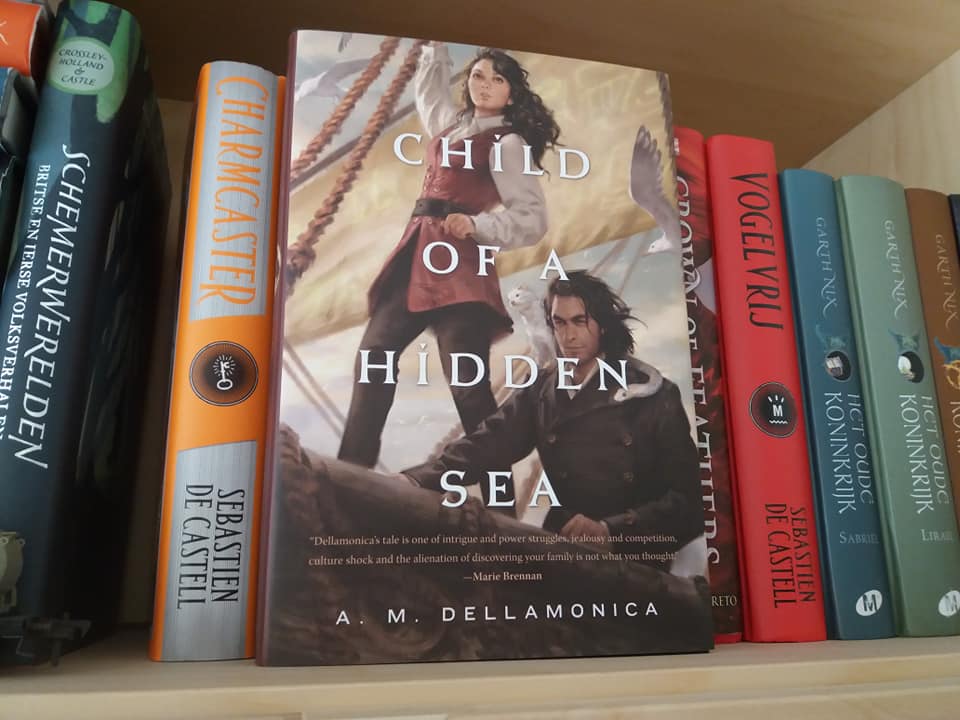 A.M. Dellamonica is not a super well known author which I think is a shame. This isn’t their only book I have on my shelf of them but it is the only one unread. Another book is also featured in this post on A’s. 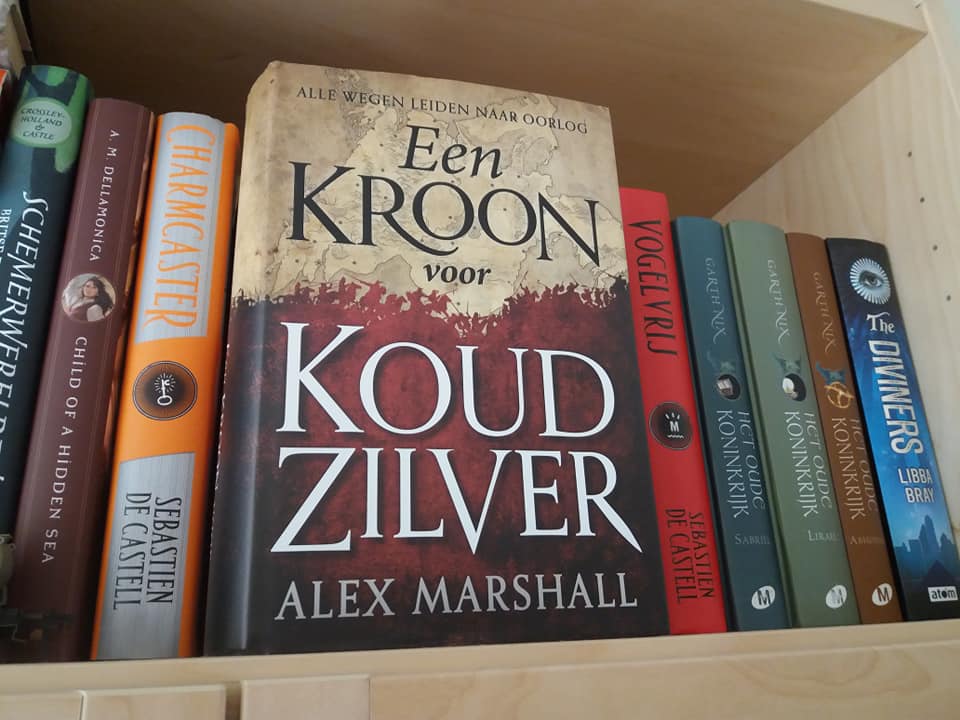 Gosh Alex Marshall knows how to write mammots of books. And I know how to buy and avoid reading them. 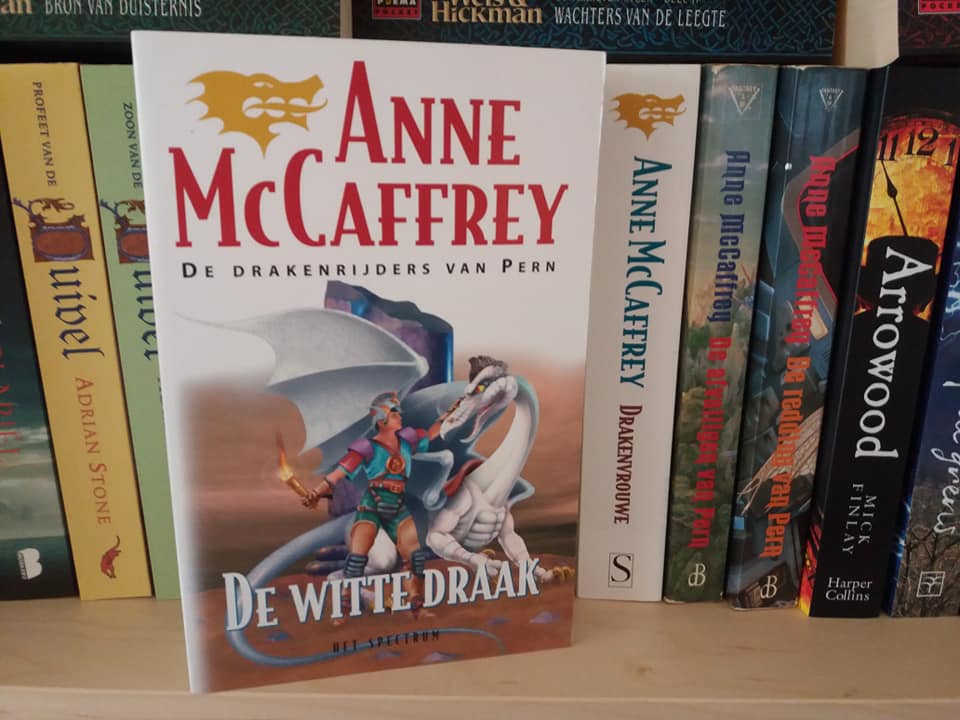 Anne McCaffrey will be a familiar name for many of you. Het Pern books are very well known. 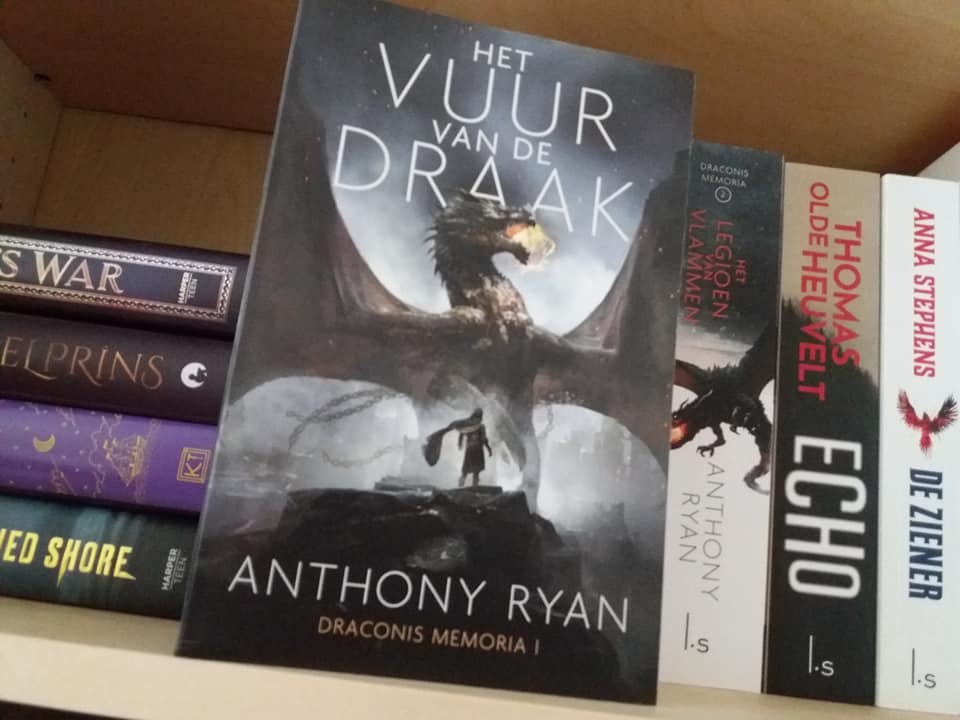 Anthony Ryan is another familiar name and yet another chunker I haven’t actually read yet. I know I should be ashamed of myself. It even has dragons on the cover. 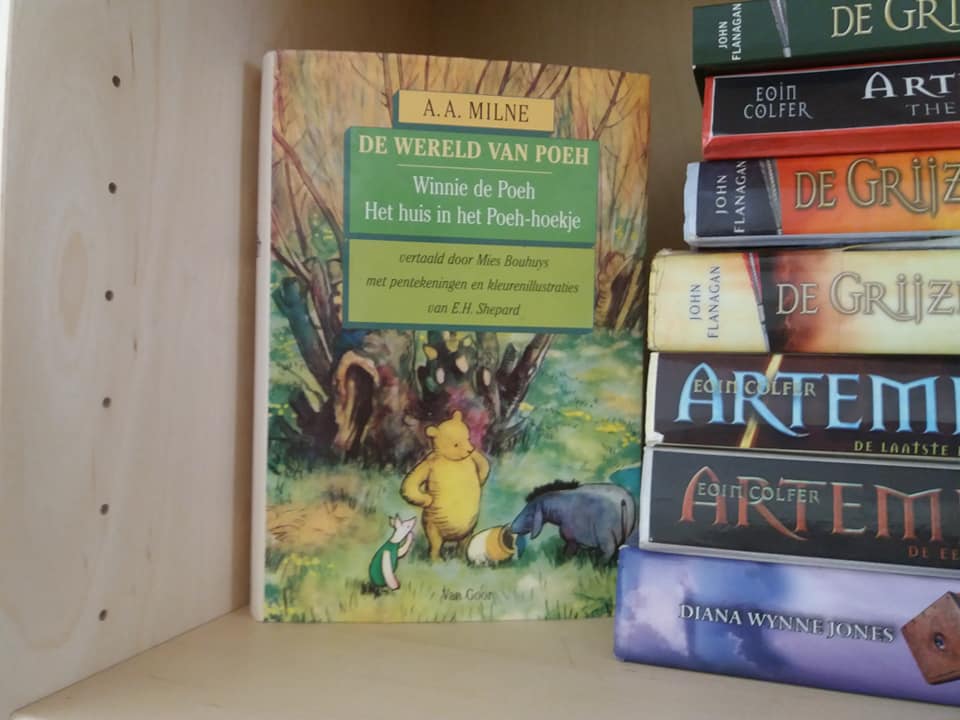 The World of Pooh was written by A.A. Milne so here is my second-hand copy that I love. I still have to read it though. 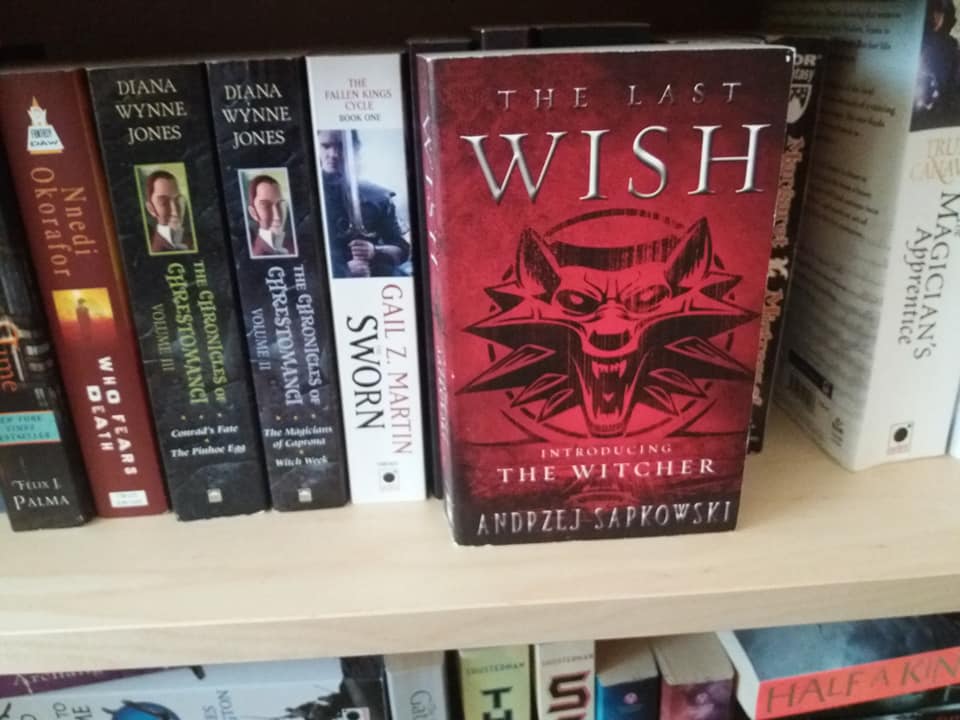 Since the tv show The Witcher is even more well known. I bought this second-hand copy to start to read the series. I think most are translated to Dutch (I don’t actually know but I suspect) and will probably pick up the rest at the library along the way. 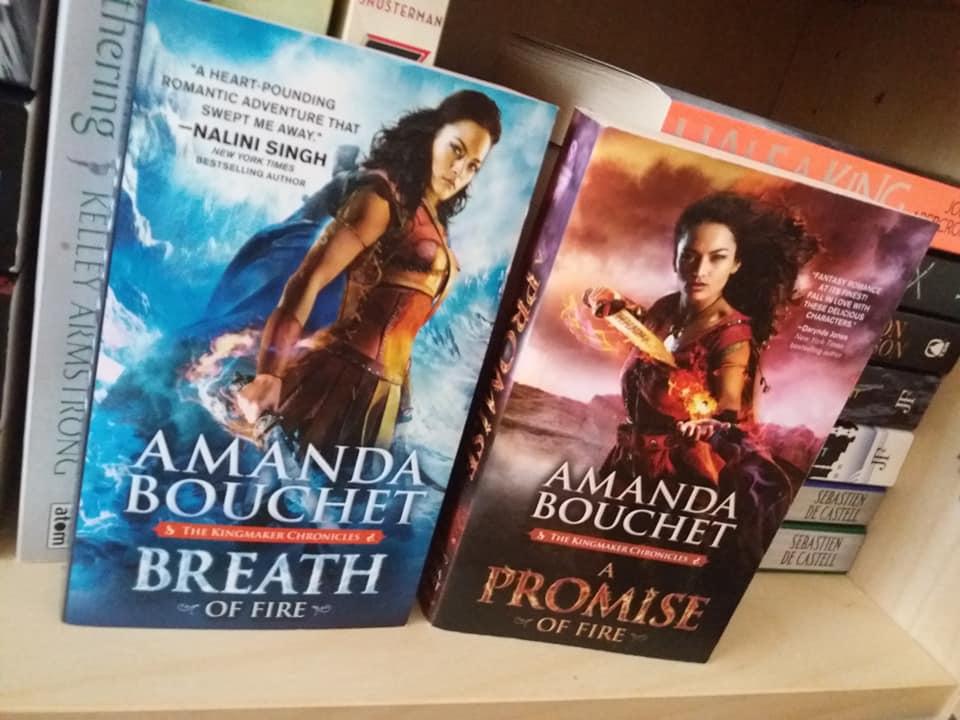 I traded these with Liesbet from Zwartraafje last year and I a certainly curious about them. I’ve seen Amanda Bouchet mentioned here and there but don’t see a lot of people recommending them or talking about her books in general. 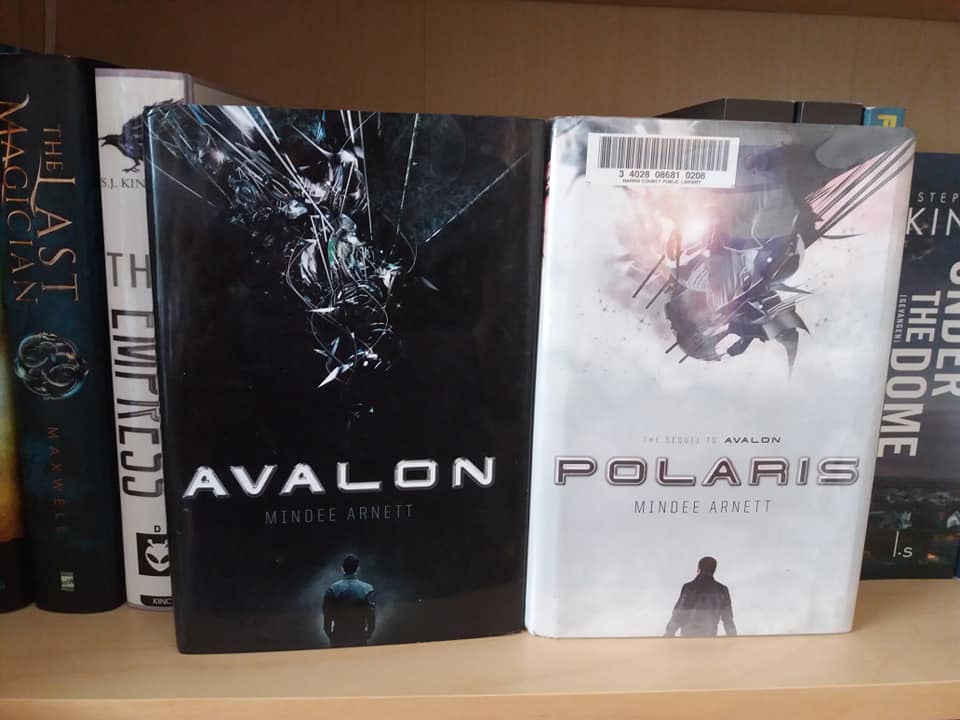 Some sci-fi on this list. Mindee Arnett is I think more known for her recent series but this one always stuck out to me more. I was able to get these second-hand thanks to La La in the Library. I’m saving them for sci-fi month. 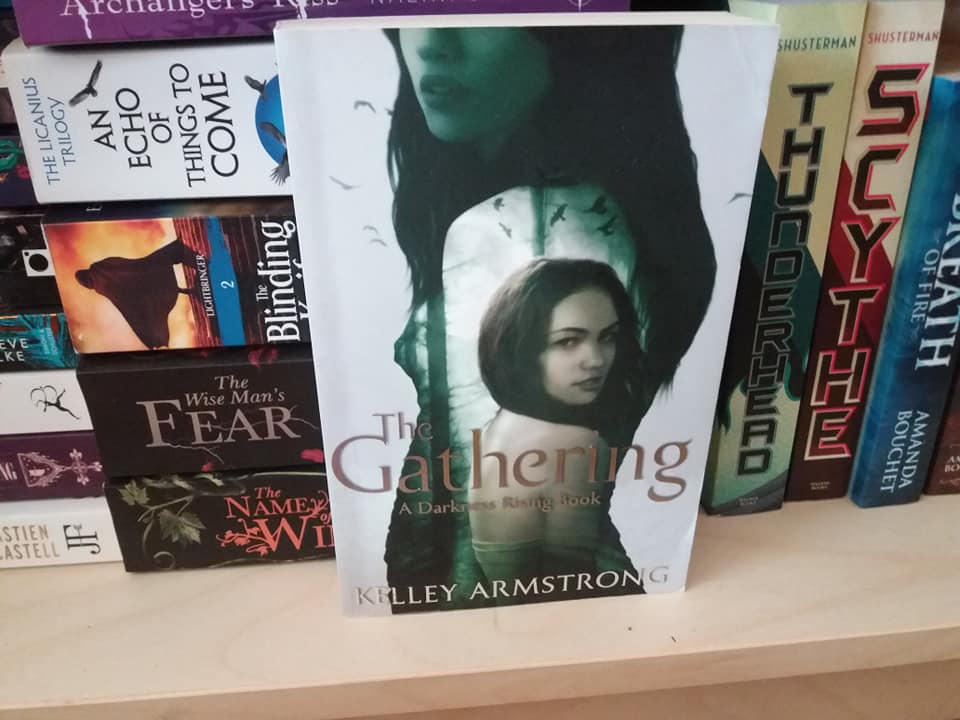 I read The Darkest Powers by Kelley Armstrong a few years ago and always meant to read on with the sequel trilogy. I haven’t yet but I still want to. 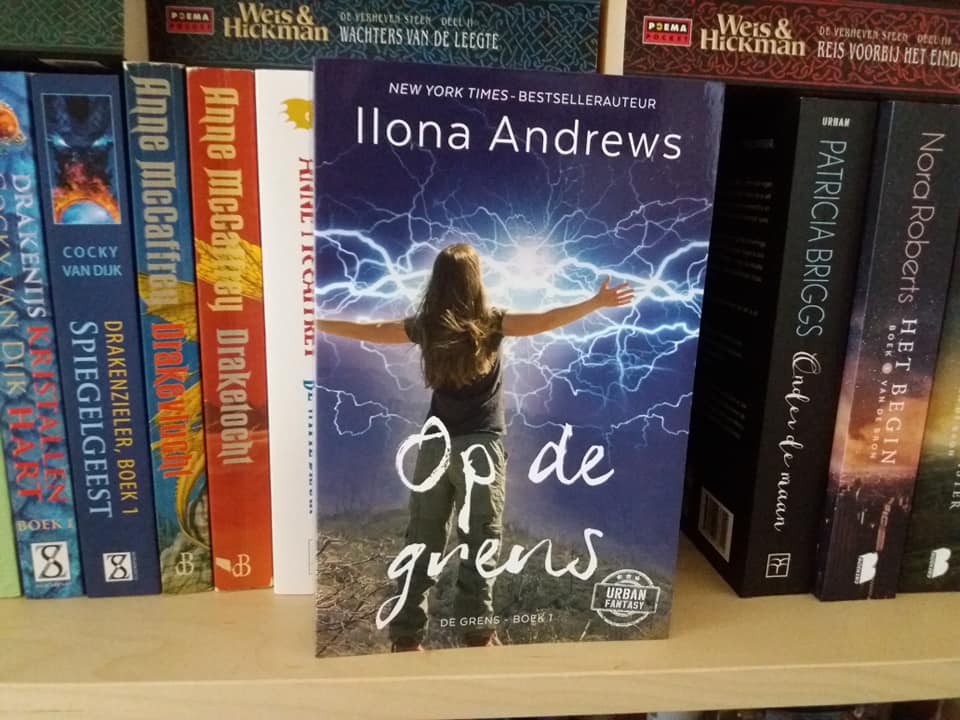 Lastly for the authors portion is this book by Ilona Andrews (a married couple). Recently I read the first books of their Kate Daniels series but I also have this first translated book on my shelves. It is On the Edge. 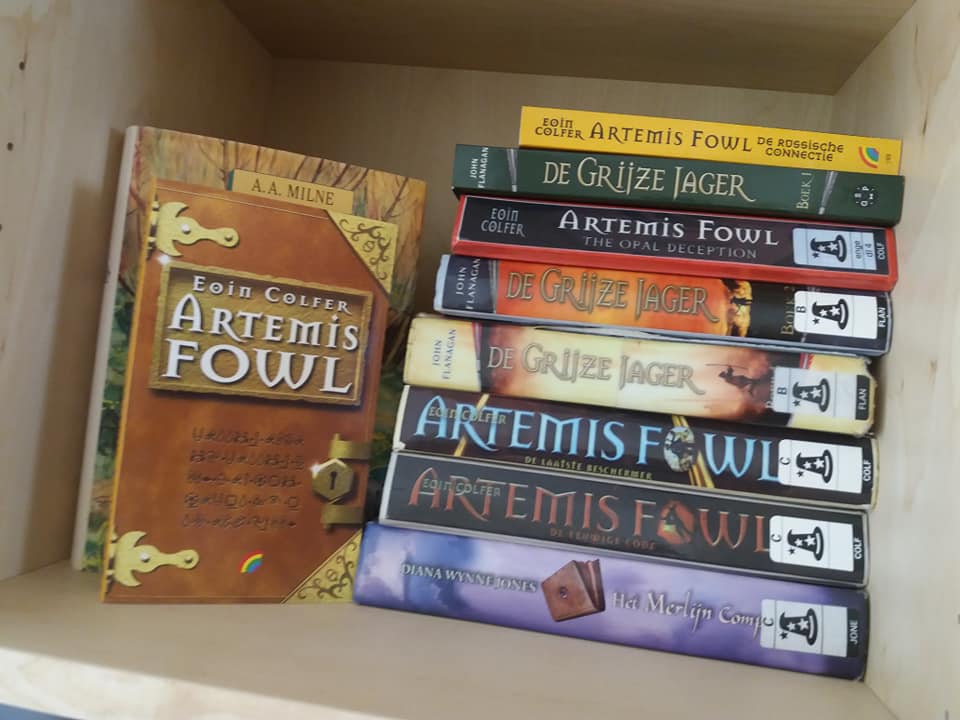 Artemis Fowl sounds like a great first pick for this. The first book is Artemis Fowl and the whole series is called Artemis Fowl. I have a few of these still unread but I did read the first two. Just haven’t gotten around to the rest. Story of my life. I also kind of bought them with Merijn in mind. 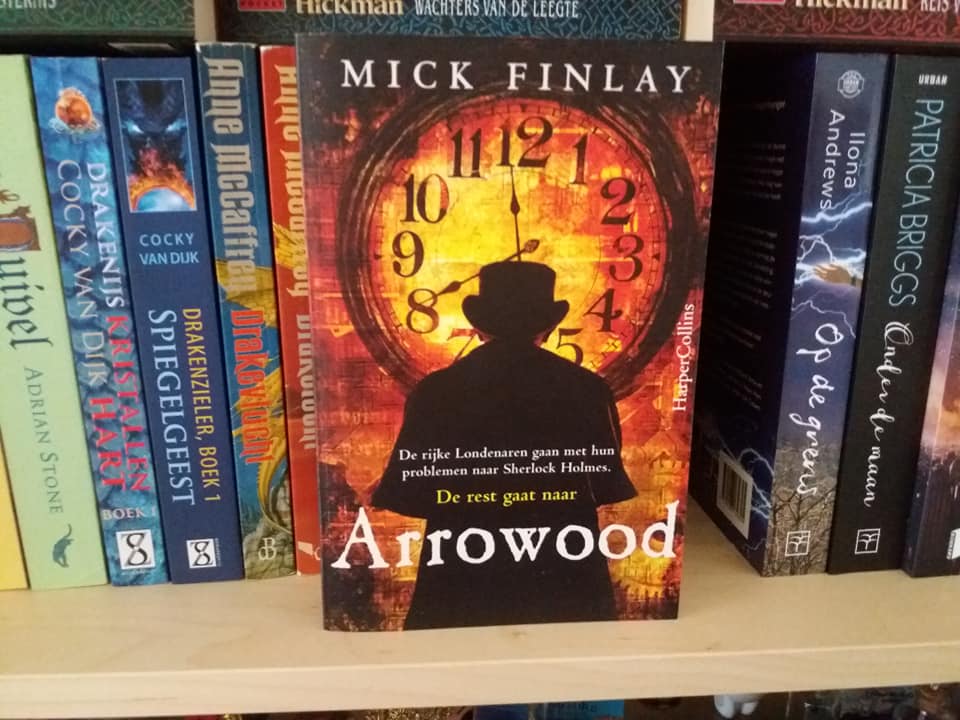 Arrowood got my attention in the store because of the clock on the cover and the line above it mentioning sherlock holmes. This takes place in the same time setting I gather so I’m interested. But I haven’t been much in the mood for detectives this year so far . 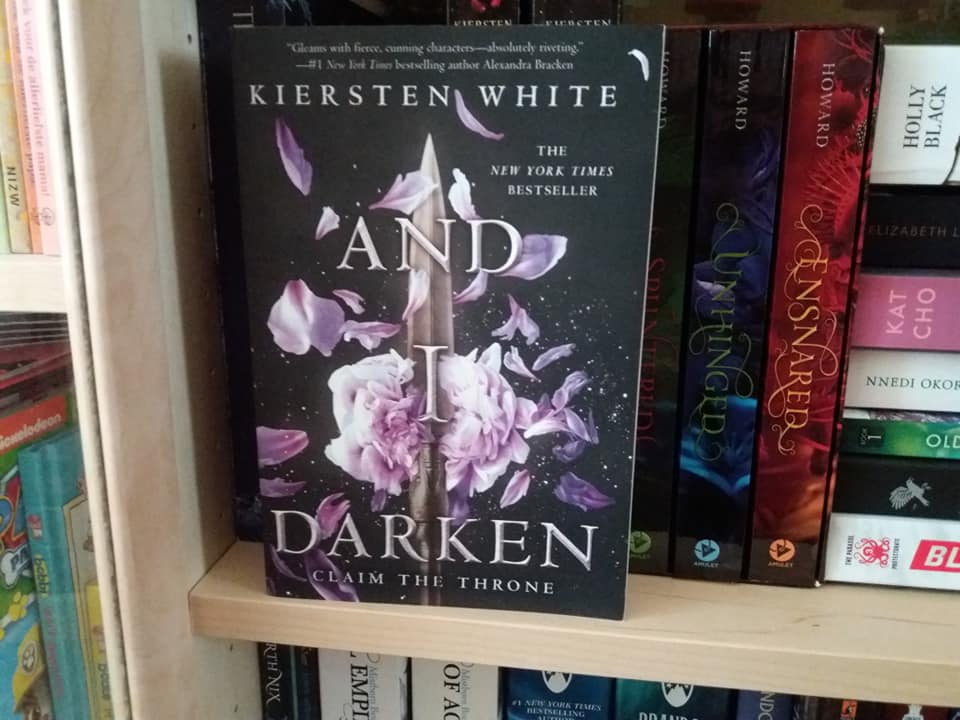 I have the whole series of And I Darken but I haven’t much felt like reading a genderbend. 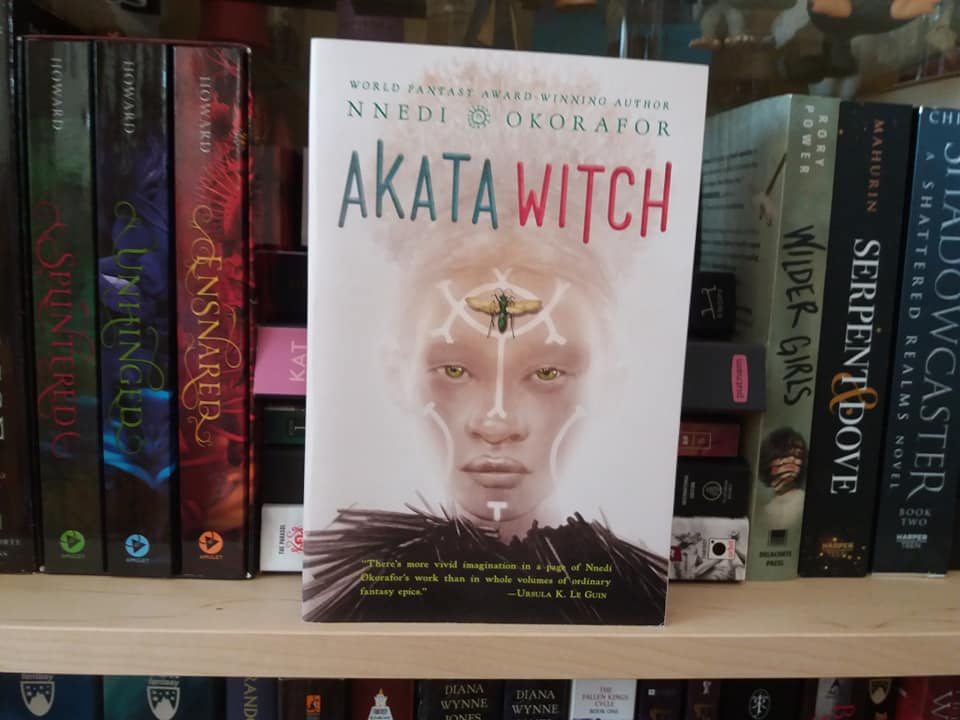 Yes hello. Look at this pretty. I really want to read Akata Witch, but I didn’t quite enjoy Binti by this author and so I am pretty nervous. 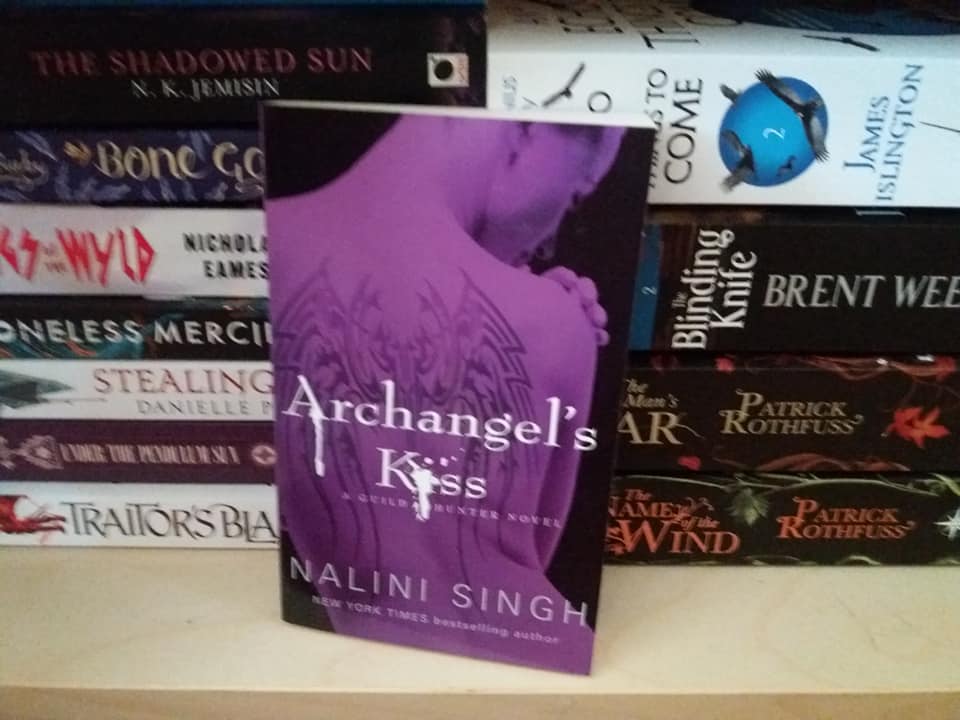 This is the second book in The Guildhunter series by Nalini Singh. I haven’t yet acquired the first book so this has gone unread still. 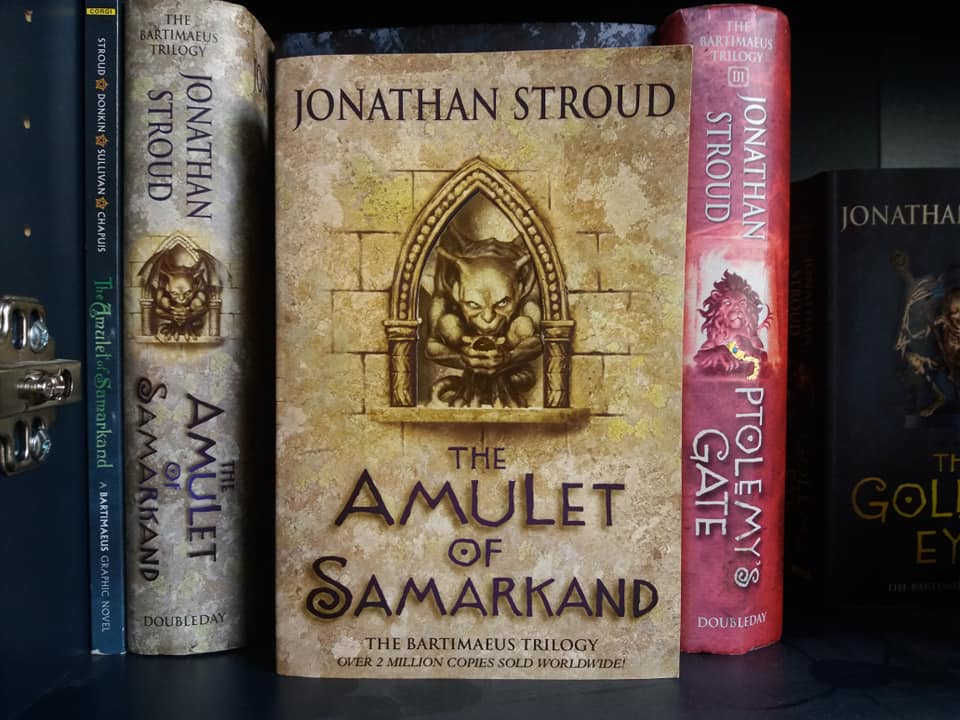 The first book of one of my favorite series. And yes I do have two copies of The Amulet of Samarkand. Hardcover and paperback. It was much needed okay. 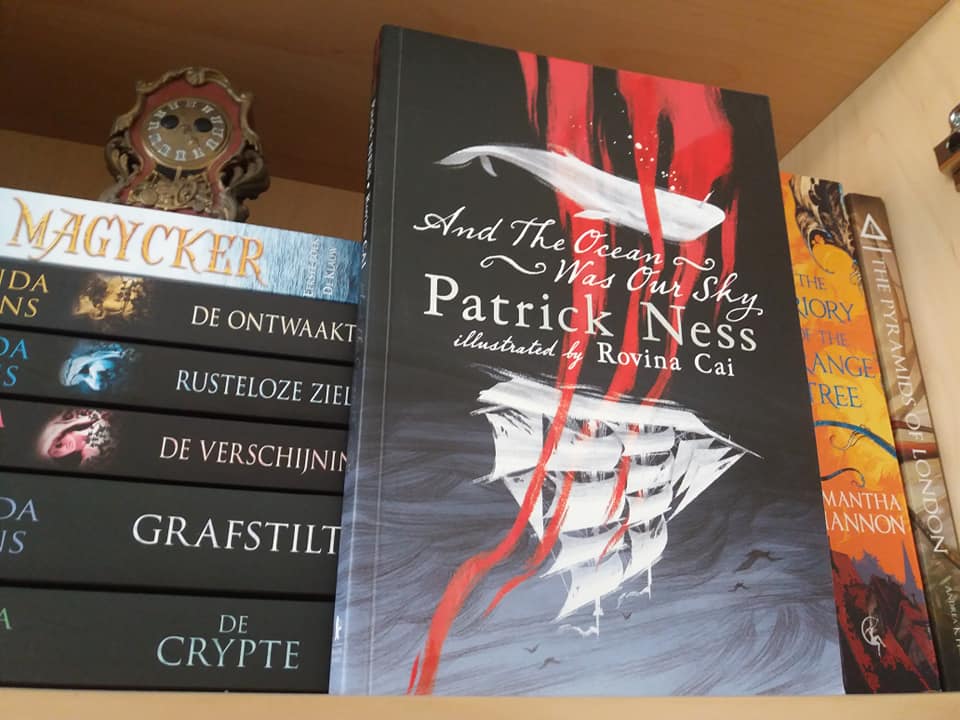 And the Ocean Was Our Sky is an illustrated book I bought and picked up to read on a whim. It was interesting as a Moby Dick retelling but also a little weird.

And then we have Angelfall, the first book of Penryn and the End of Days. But most people call this series Angelfall anyway.

No photos here but I am going to briefly talk about some characters that have names that start with an A here.

Let me start with one of my favorites, Annabeth from Percy Jackson and the Olympians and The Heroes of Olympus by Rick Riordan. It took me a little bit to warm up to Annabeth in the first book but she quickly proved what a great character she was. Not afraid to tell seaweed brain as it is but still manage a friendship with him. Ahum and more.

Amelia Grey from The Graveyard Queen by Amanda Stevens is a different kind of character. Reserved and full of secrets. She can see ghosts.

Anden from Jade City by Jade Lee is a cinnamon role. He grew up in a position that taught him things a certain way. But as he comes across things he learns that maybe he doesn’t value those things. And he is just the sweetest.