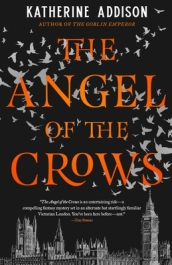 Thank you to Tor Books and Netgalley for the review copy in exchange for an honest review. This does not change my opinion in anyway.

A fantasy novel of alternate 1880s London, where killers stalk the night and the ultimate power is naming.
.
This is not the story you think it is. These are not the characters you think they are. This is not the book you are expecting.
.
In an alternate 1880s London, angels inhabit every public building, and vampires and werewolves walk the streets with human beings under a well-regulated truce. A fantastic utopia, except for a few things: Angels can Fall, and that Fall is like a nuclear bomb in both the physical and metaphysical worlds. And human beings remain human, with all their kindness and greed and passions and murderous intent.
.
Jack the Ripper stalks the streets of this London too. But this London has an Angel. The Angel of the Crows.

The Angel of the Crows really is not the book you think it is. It really isn’t. Normally that is not a bad thing but I am not sure it is in this case. You see, this is basically a Sherlock Holmes retelling.

It’s not even just an inspired retelling but it takes heavily from the original books, up to certain scenes at the start of them meeting. While the characters aren’t called Sherlock and Watson, it’s Crow and Doyle, most of the other characters keep their original names. Within 400 pages Addison drives us through quite a bit of cases our original Sherlock dealt with.  The author’s note mentions this started as a Sherlock fanfic. It kind of shows.

I am certainly not adverse to a sherlock retelling at all but as a whole I felt this book got stale very quickly when it comes to the plot. We go through the cases while the bigger plot is meant to be that of Jack the Ripper. But it never feels like we are moving towards something.

The most appealing things about the whole book is the world in itself. Inhabited by angels, werewolves, hellhounds, vampires and more. It is an interesting setting as a whole. And I wish, I so wish that more had been done with it in the cases, in the overall portion of the world.

As for the characters. Crow was meant as Sherlock but a much kinder and more approachable version. Where as Doyle, meant as Watson, was quite frankly a bit of a grump at times. Not necessarily a bad thing. Crow is asexual as an angel and apparently angels are initially female though Crow is mostly seen as male now. Doyle is actually a woman, dressed as a man. I would almost say Doyle is trans but at the same time they mention that they don’t quite feel male or female.

Addison’s writing is solid and when it comes to the character interactions there are certainly a few gems in there. But I couldn’t quite get past the whole of the setting and how little was done with it in the end.

11 thoughts on “The Angel of the crows | Book Review”