We’re at the point of going into the season of Summer. Initially I was going to move over the books I hadn’t read to this TBR (as per topic of Top Ten Tuesday, as always hosted by That Artsy Reader Girl) but current results made me realize that I tend to keep books by black and sometimes other poc authors on the edge of my TBR.

That is entirely on me. I think sometimes I am scared of the emotions that they are able to pour into their books. They always tend to hit so hard, and that isn’t just for books that deal with their pain but also fantasy. But that still doesn’t make it right that I don’t read them more. So below you will find a mixture of black and NB authors.

Looking Back to Spring

The Books I Read:  Holy Sister | When the Moon Was Ours | Exit Strategy

The Books I Didn’t Read: Foundryside | Wyrd Sisters | The Candle and the Flame | The Bone Witch | The Library of Fates | The Black Prism | Frogs & Kisses 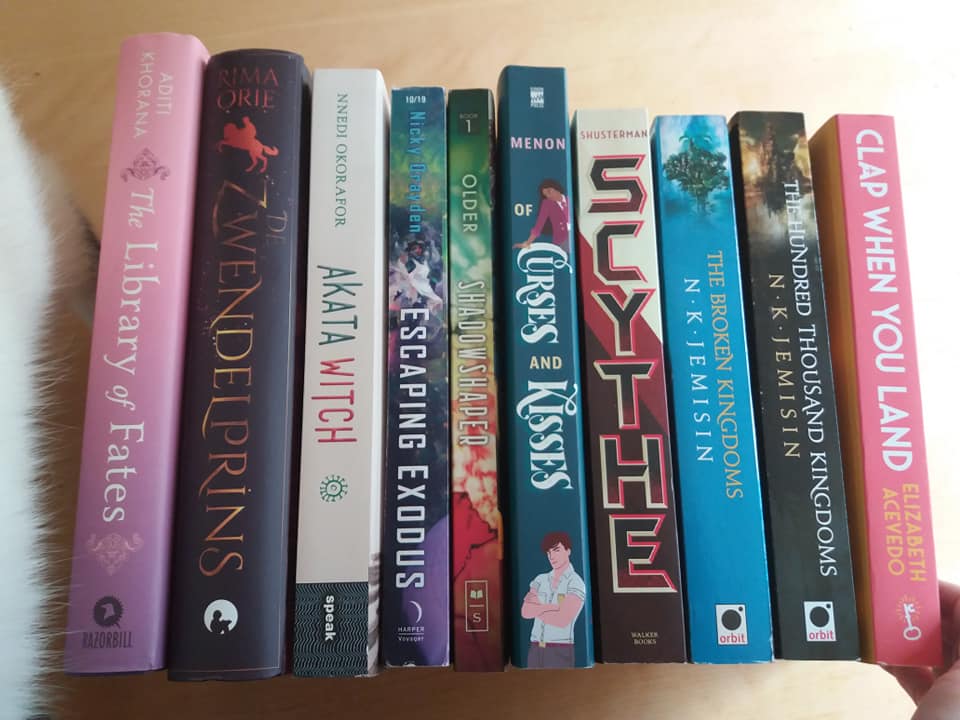 The Library of Fates by Aditi Khorana

No one is entirely certain what brings the Emperor Sikander to Shalingar. Until now, the idyllic kingdom has been immune to his many violent conquests. To keep the visit friendly, Princess Amrita has offered herself as his bride, sacrificing everything—family, her childhood love, and her freedom—to save her people. But her offer isn’t enough.
.
The unthinkable happens, and Amrita finds herself a fugitive, utterly alone but for an oracle named Thala, who was kept by Sikander as a slave and managed to escape amid the chaos of a palace under siege. With nothing and no one else to turn to, Amrita and Thala are forced to rely on each other. But while Amrita feels responsible for her kingdom and sets out to warn her people, the newly free Thala has no such ties. She encourages Amrita to go on a quest to find the fabled Library of All Things, where it is possible for each of them to reverse their fates. To go back to before Sikander took everything from them.
.
Stripped of all that she loves, caught between her rosy past and an unknown future, will Amrita be able to restore what was lost, or does another life—and another love—await?

Dutch author. I translated the synopsis for you guys.
.
As a curious kitchen help the 17 year old Simran knows the most colorful stories to the dirtiest gossips that make the rounds in the Maharadja’s palace. But there is one story that has always kept her and the rest of the people captivated: the mysterious disappearance of the Crown Prince.
.
Twenty years after the disappearance of the Suryaanse Crown Prince, a prince from the cold and far Fengart comes to the palace with claims that he can find the Crown Prince. To Simran’s surprise the prince asks her for a favor, one that could change her own life. She desires to discover life outside of the palace, but can she trust this prince? Or are his plans not as noble as he makes them out to be?

Sunny Nwazue lives in Nigeria, but she was born in New York City. Her features are West African, but she’s albino. She’s a terrific athlete, but can’t go out into the sun to play soccer. There seems to be no place where she fits in. And then she discovers something amazing—she is a “free agent” with latent magical power. And she has a lot of catching up to do.
.
Soon she’s part of a quartet of magic students, studying the visible and invisible, learning to change reality. But just as she’s finding her footing, Sunny and her friends are asked by the magical authorities to help track down a career criminal who knows magic, too. Will their training be enough to help them against a threat whose powers greatly outnumber theirs?

Escaping Exodus is a story of a young woman named Seske Kaleigh, heir to the command of a biological, city-size starship carved up from the insides of a spacefaring beast. Her clan has just now culled their latest ship and the workers are busy stripping down the bonework for building materials, rerouting the circulatory system for mass transit, and preparing the cavernous creature for the onslaught of the general populous still in stasis. It’s all a part of the cycle her clan had instituted centuries ago—excavate the new beast, expand into its barely-living carcass, extinguish its resources over the course of a decade, then escape in a highly coordinated exodus back into stasis until they cull the next beast from the diminishing herd.
.
And of course there wouldn’t be much of a story if things didn’t go terribly, terribly wrong.

Sierra Santiago was looking forward to a fun summer of making art, hanging out with her friends, and skating around Brooklyn. But then a weird zombie guy crashes the first party of the season. Sierra’s near-comatose abuelo begins to say “Lo siento” over and over. And when the graffiti murals in Bed-Stuy start to weep…. Well, something stranger than the usual New York mayhem is going on.
.
Sierra soon discovers a supernatural order called the Shadowshapers, who connect with spirits via paintings, music, and stories. Her grandfather once shared the order’s secrets with an anthropologist, Dr. Jonathan Wick, who turned the Caribbean magic to his own foul ends. Now Wick wants to become the ultimate Shadowshaper by killing all the others, one by one. With the help of her friends and the hot graffiti artist Robbie, Sierra must dodge Wick’s supernatural creations, harness her own Shadowshaping abilities, and save her family’s past, present, and future.

Will the princess save the beast?
.
For Princess Jaya Rao, nothing is more important than family. When the loathsome Emerson clan steps up their centuries-old feud to target Jaya’s little sister, nothing will keep Jaya from exacting her revenge. Then Jaya finds out she’ll be attending the same elite boarding school as Grey Emerson, and it feels like the opportunity of a lifetime. She knows what she must do: Make Grey fall in love with her and break his heart. But much to Jaya’s annoyance, Grey’s brooding demeanor and lupine blue eyes have drawn her in. There’s simply no way she and her sworn enemy could find their fairy-tale ending…right?
.
His Lordship Grey Emerson is a misanthrope. Thanks to an ancient curse by a Rao matriarch, Grey knows he’s doomed once he turns eighteen. Sequestered away in the mountains at St. Rosetta’s International Academy, he’s lived an isolated existence—until Jaya Rao bursts into his life, but he can’t shake the feeling that she’s hiding something. Something that might just have to do with the rose-shaped ruby pendant around her neck…
.
As the stars conspire to keep them apart, Jaya and Grey grapple with questions of love, loyalty, and whether it’s possible to write your own happy ending.

Scythe (Arc of a Scythe 1) by Neal Shusterman

A world with no hunger, no disease, no war, no misery. Humanity has conquered all those things, and has even conquered death. Now scythes are the only ones who can end life—and they are commanded to do so, in order to keep the size of the population under control.
.
Citra and Rowan are chosen to apprentice to a scythe—a role that neither wants. These teens must master the “art” of taking life, knowing that the consequence of failure could mean losing their own.

The Hundred Thousand Kingdoms and The Broken Kingdoms (Inheritance 1 and 2) by N.K. Jemisin

Yeine Darr is an outcast from the barbarian north. But when her mother dies under mysterious circumstances, she is summoned to the majestic city of Sky. There, to her shock, Yeine is named an heiress to the king. But the throne of the Hundred Thousand Kingdoms is not easily won, and Yeine is thrust into a vicious power struggle.

Clap When You Land by Elizabeth Acevedo

Camino Rios lives for the summers when her father visits her in the Dominican Republic. But this time, on the day when his plane is supposed to land, Camino arrives at the airport to see crowds of crying people…

In New York City, Yahaira Rios is called to the principal’s office, where her mother is waiting to tell her that her father, her hero, has died in a plane crash.

Separated by distance—and Papi’s secrets—the two girls are forced to face a new reality in which their father is dead and their lives are forever altered.

And then, when it seems like they’ve lost everything of their father, they learn of each other.

I Call This Cat Being Obnoxious Photos

You have no idea how many shaky photos I had because she kept pushing against my hand as I took the photo. But here as a treat are some of the outtakes with the kitty in the frame since I know you guys love that. 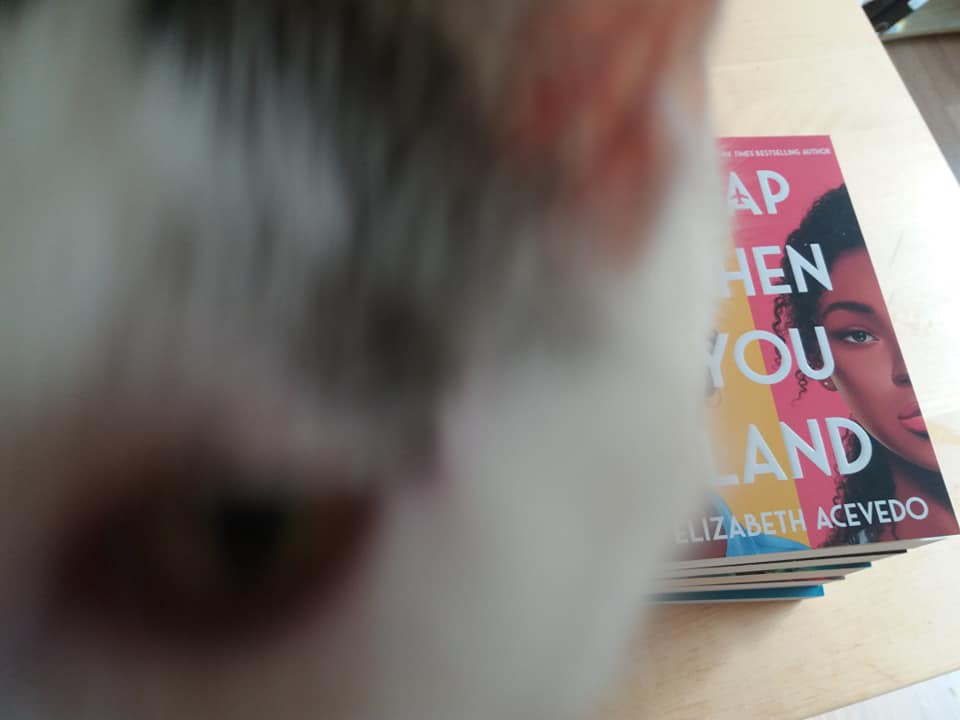 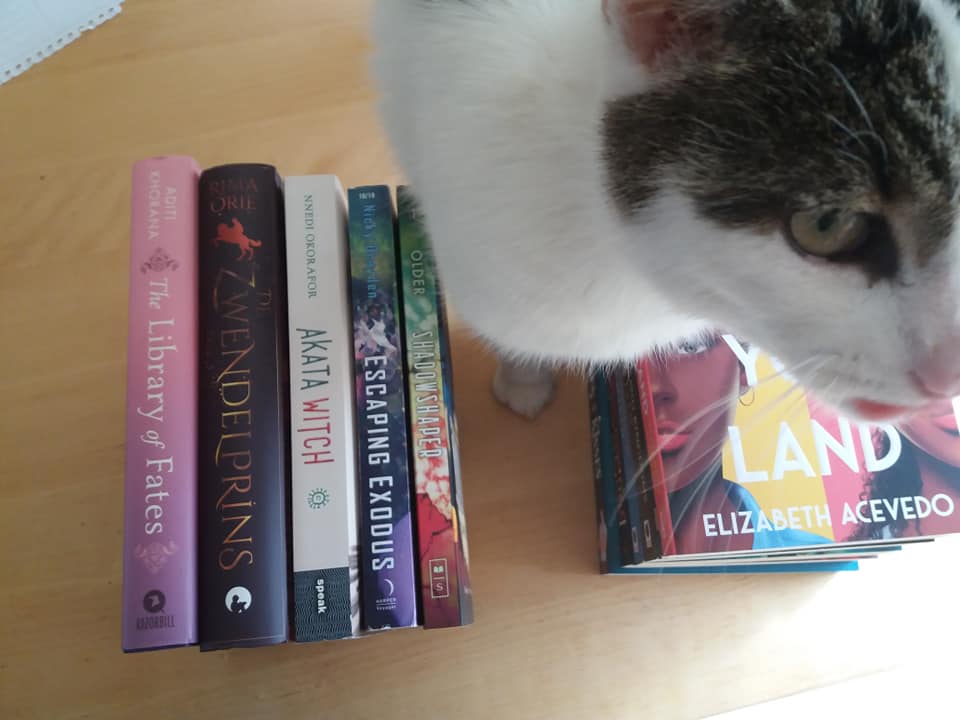 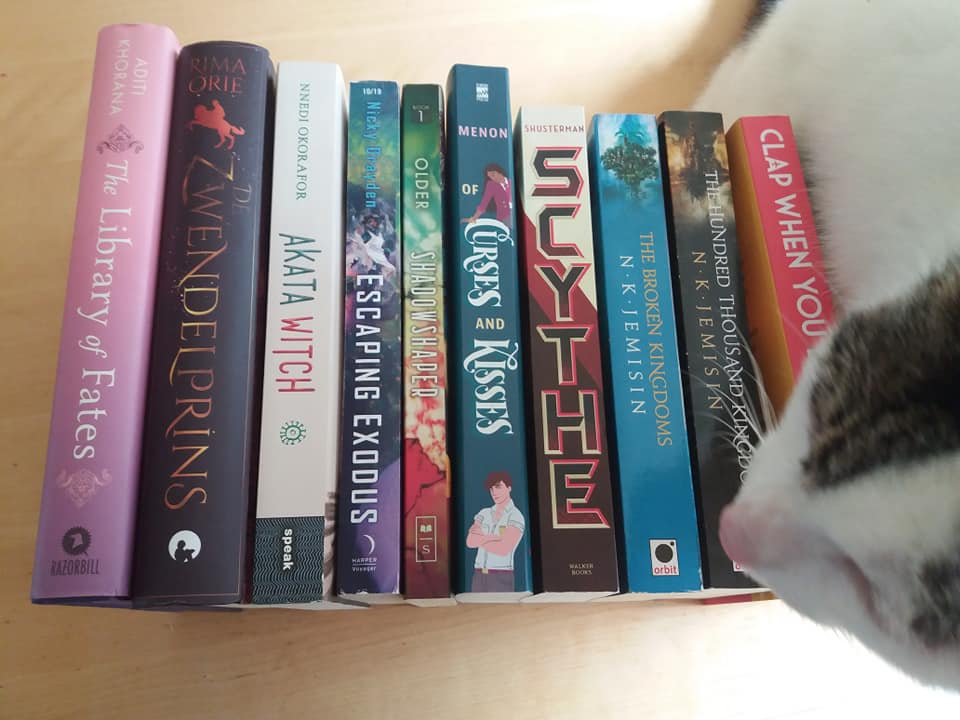