One of the things that I always wanted to hold to with kids is that I didn’t want to jump on board the whole blue is boy and pink is girl focus that there was for baby’s already. Let alone the pressure that is on them for the rest of their lives in that regard. It is why I didn’t want to ‘announce’ the baby’s gender before birth. I didn’t want to have a color coded collection of clothes for him already thank you very much.

Our society is so fixed on things to be a certain way. Make-up is for girls, cars are for boys. And let’s just completely disregard non-binary or trans people in this fixation to divide. It is why I leave things open for Merijn. You want that pink hat, go for it. Especially in the Spring and Summer he loves to get his toenails painted. It makes him so happy. So I do it. I am letting him step out of that norm so he can be who he wants to be. I hope that is a message that comes across to him and that society won’t squash out of him.

So what am I trying to say? I am getting at that.

High Fantasy and Epic Fantasy don’t take place in our world so it would stand to reason they wouldn’t have to uphold the norm of our society’s gender constructs. Yet one thing we often see is the same gender roles and the same approach to gender as our society has.  And sure, sometimes the gender roles get ‘twisted’ but that is all in response to things that happen in society.

That America has yet to have a female president (the country of ‘freedom and opportunity’), that women still get underpaid and are seen as the housewives and caretakers of the children, is still something that highly resonates throughout a lot of fantasy. We rarely question this. We sit in this norm that society has created for us.

Fantasy is the fantastical. Where anything is possible. Yet we are still so incredibly stuck in our own ways that not everything is possible in fantasy. Isn’t that funny? I don’t think it is at all. And you know I’ve fallen down that trap as well. It is ‘safer’ to write about what you know. But does that make it better?

It doesn’t . Through fiction we can see learn how things could be different. We can learn how our strict society feels to those around us who don’t fit into that as neatly.  And when we learn we can create more room for them. Books are a great way to opening up these kind of topics without having to be too judgy or confronting. In real life many will walk away from these things because they are uncomfortable or haven’t yet learned to widen their perspective. But books can do this more gentle, even if change like this might make someone close a book. It will have still have gotten in their head.

Eefa has been a good husband, she knows, but now she is running.

The story that jolted this bit of musing was Do Not Look Back, My Lion by Alix E. Harrow. (Read the story for free here.) In this story the roles of wife and husband aren’t gender related. Both the wife and husband in the story are female. It is about what the person does that makes them a husband or a wife. It is a bit more complicated than that of course but it certainly gets you thinking. Even the term Emperor was used for the female.  It is an interesting look at these terms and gives more room for non-binary characters as well (though they are not in this story). 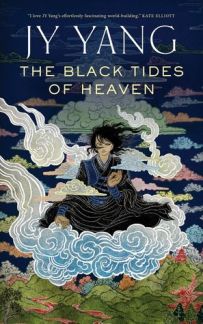 It also made me remember the Tensorate novella series by J.Y. Yang. While I have only read The Black Tides of Heaven it is also a fantasy that questions the gender constructs we have. Children aren’t born with a gender and at the age of 18 (If I remember correctly) they get to choose what they want.  But some know at 3 and others not until a much later time. Some undergo a surgery and others keep their breasts when choosing the male gender.

This kept going through my head for a long time.  It is such a different way to approach gender. Where we let it be determined by genitals, here it is the choice of the person itself. Surgery or not, are not any kind of discussion points. They get to choose what they want and have the body they want along with it.

Have you read any fantasy that changed the way you looked at the gender construct in our society?