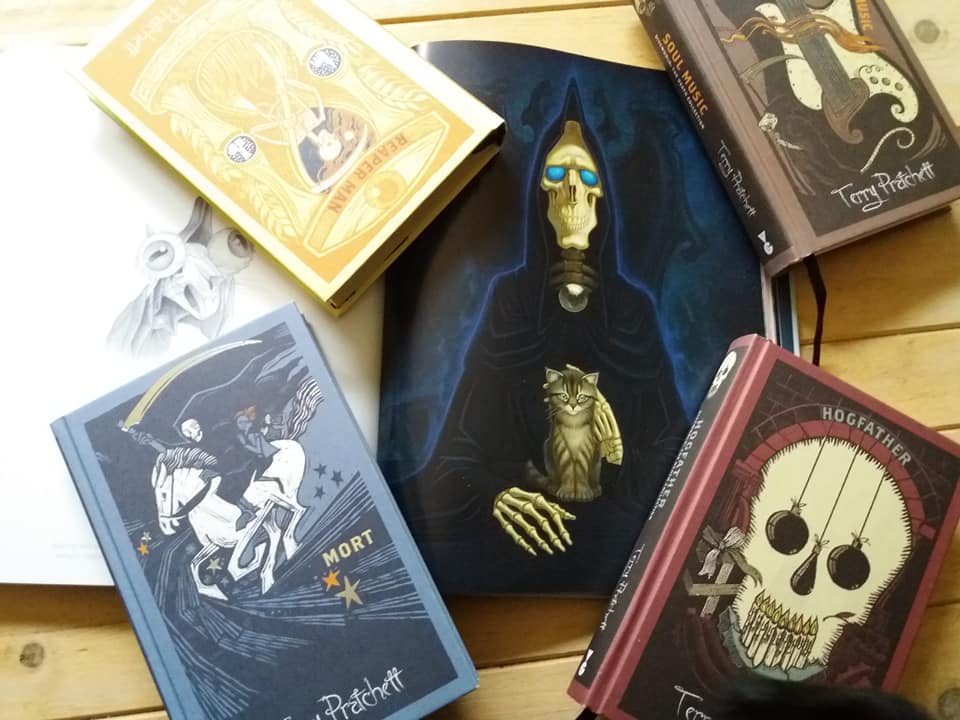 As you all know by now I am a fan of Terry Pratchett and Discworld. I had my eye on Paul Kidby’s Imaginarium book for a while now but holy bananas that thing is expensive. Luckily I found a second-hand copy for half the price for my birthday and made sure I got it.

In case you are unfamiliar, Discworld is a series of companion standalone books set in a high fantasy world. There are 41 main books with some other companion books alongside it. Terry Pratchett, the author, passed away in 2015. 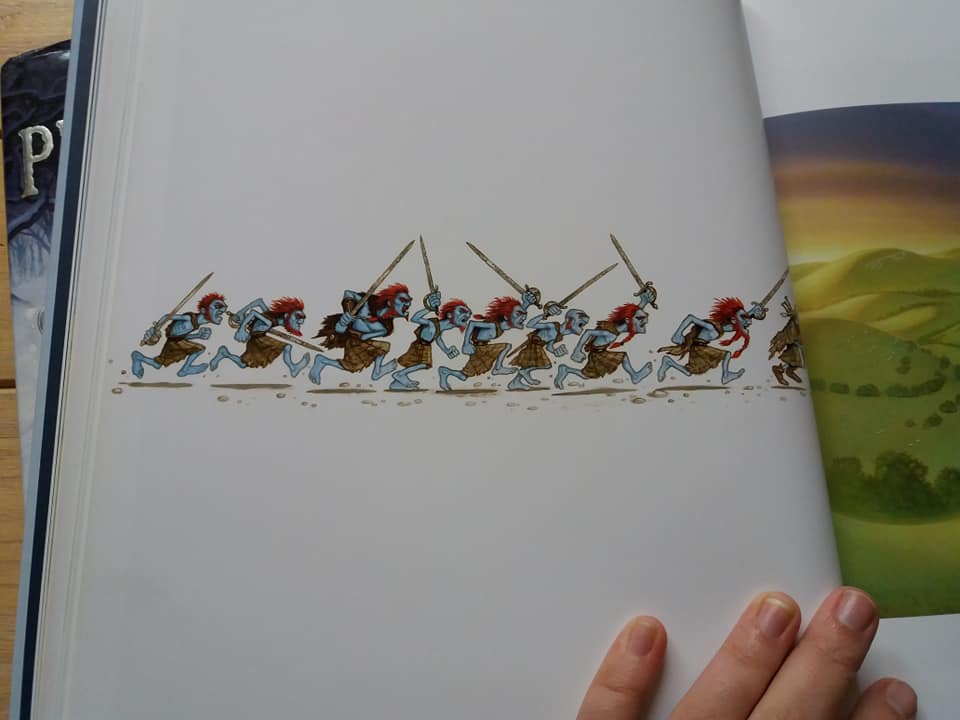 I have always liked seeing all the art that was going around on the internet of Discworld, and in general I am fond of illustrations that go with books. Discworld is quite big and while Pratchett was a very talented writer in visualisation, sometimes it just nice to see how he entirely envisioned it.

Pratchett always had a good say in how things turned out looking for Discworld, including these illustrations. I remember reading once that if he didn’t like it or it wasn’t like he envisioned it, he would say so. At the same time he was also always open to someone else’s interpretation if that ended up fitting better. I always got the impression that it was a lot of joined effort in that regard. Not two people on an island. 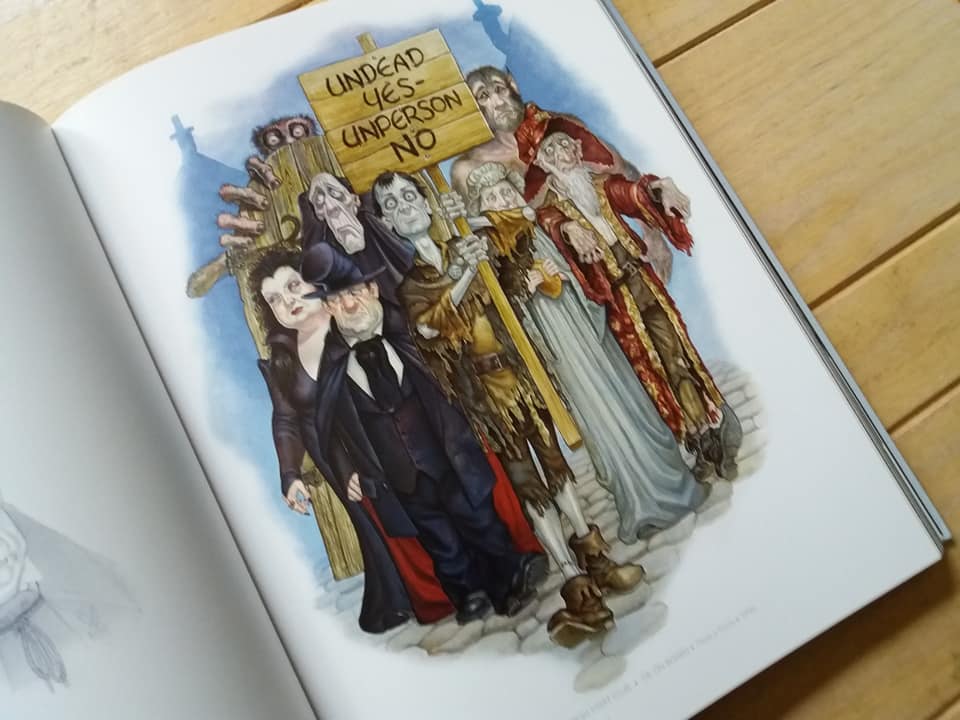 The illustrations are divided mostly by settings/countries in Discworld, and the characters that originate from those setting. We get landscapes, character design, sketches, groups and so on. While I haven’t read all of the books and arcs I feel like this is still a great book to grab if you have only read a few and not all or most. For me it made me want to reread books but I also became more enthused about picking up the other books.

While I love owning this book I do have one complaint. For a book that costs 40 euro new price and that consist of only illustrations, they really should have thought better about the spreads. As you can see from the picture below. Some images are spread over two pages. A lot of the detail of the middle gets completely lost and I think there certainly was a better way to deal with that. Just thinking of having a flap you can fold out for instance. It is really such a shame with such beautiful art. It made me dock a star on my goodreads rating for this book. 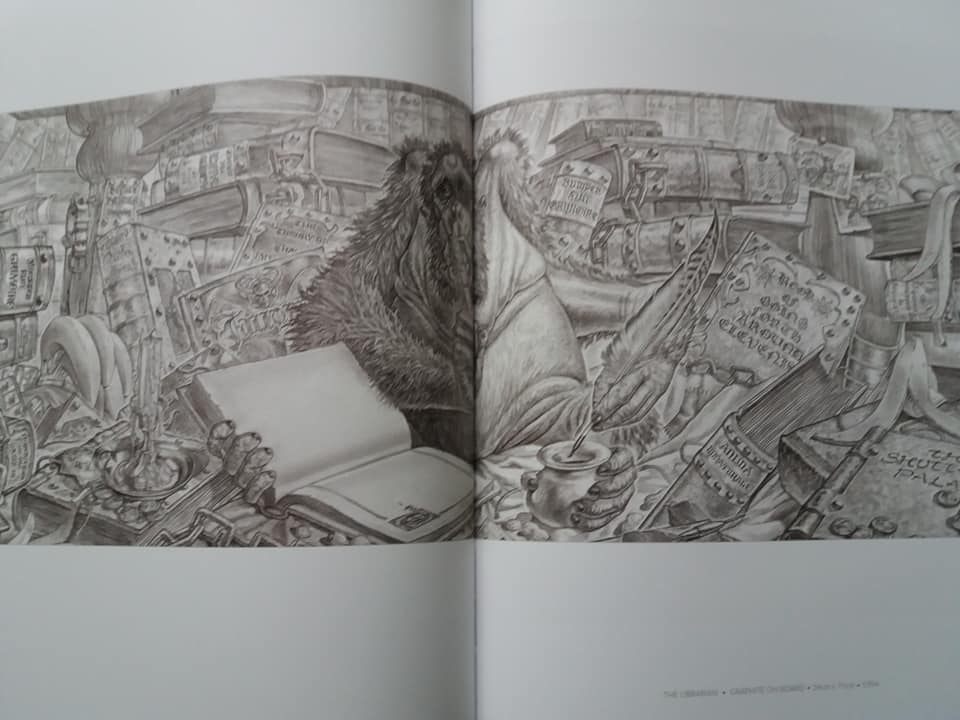 And of course I do have some favorite illustrations. 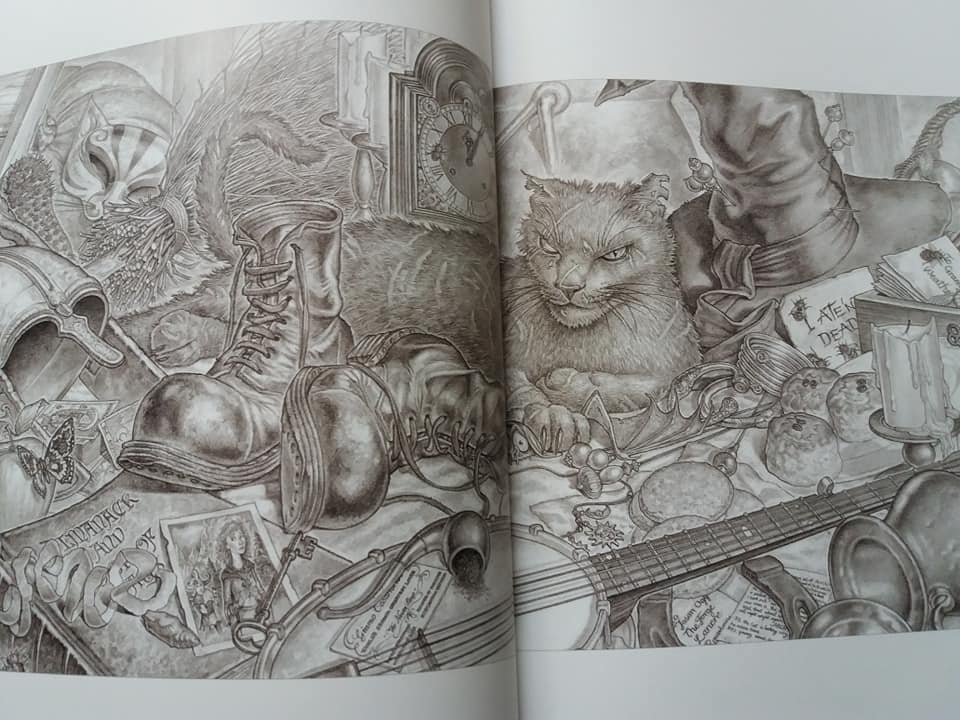 This is Greebo, a cat from the witches arc. Look at that face, ha. And I love seeing all the tidbits laying around him. It will be fun to look at this again after having read more books in the witches arc. 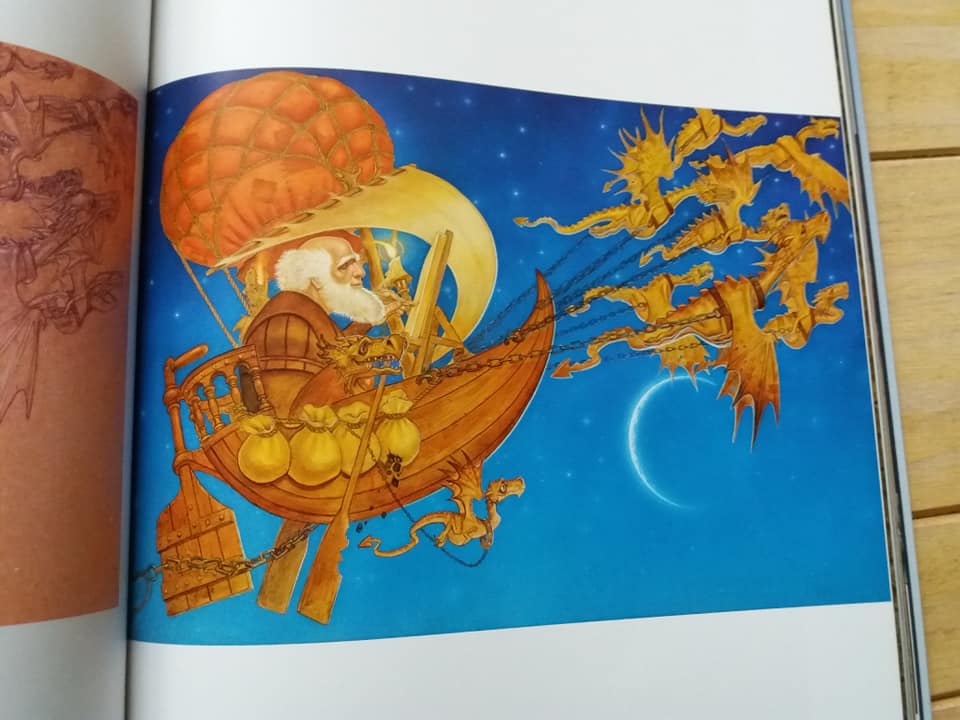 This one always draws my attention. An airship being pulled by (swamp) dragons is of course going to get me excited about things and the men is a hint towards one we had in our own world too. 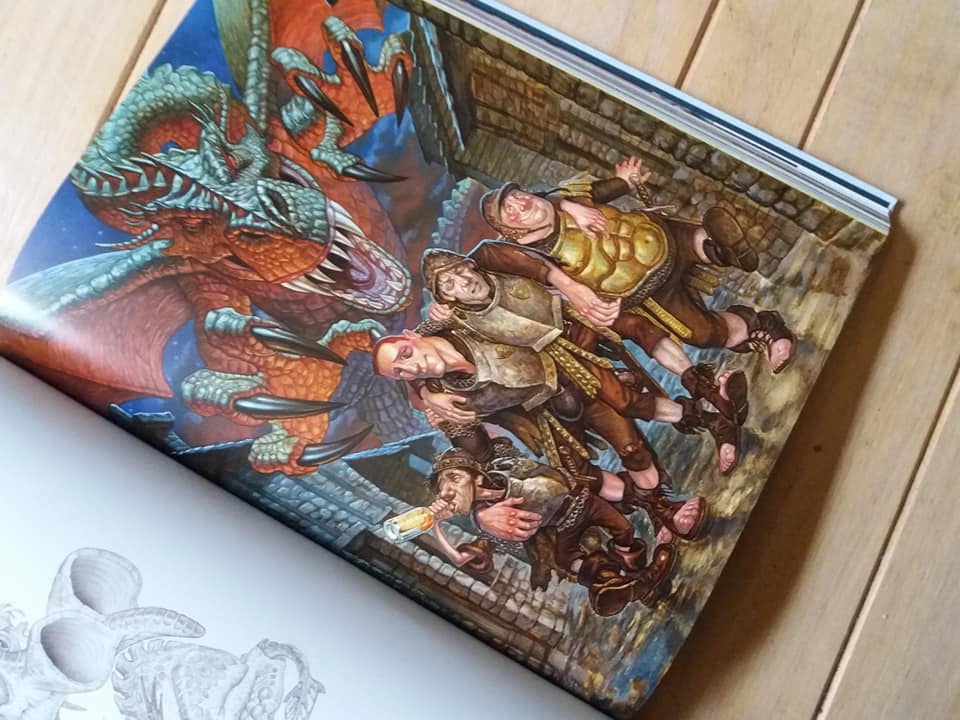 I have not yet read the City Watch books yet but this picture amuses me to no end because I get the idea this shows the City Watch completely for who they are haha. And yes, ferocious dragon. My cup of tea. 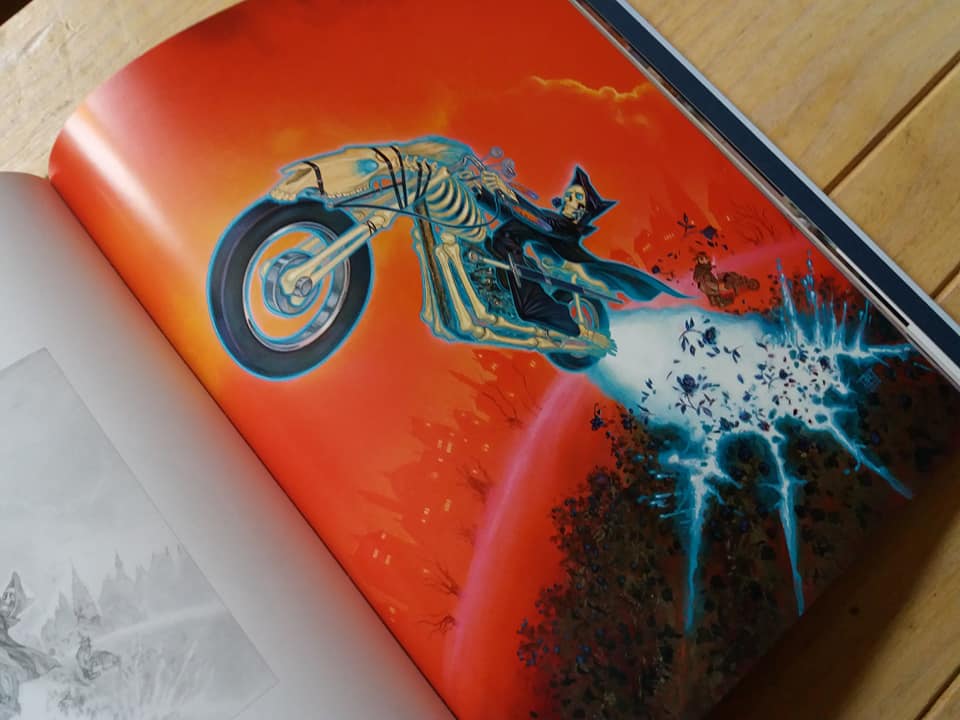 This, and the one at the top of this blog post with the cat, is probably my favorite illustration of death. It is so eye catching and asskicking. 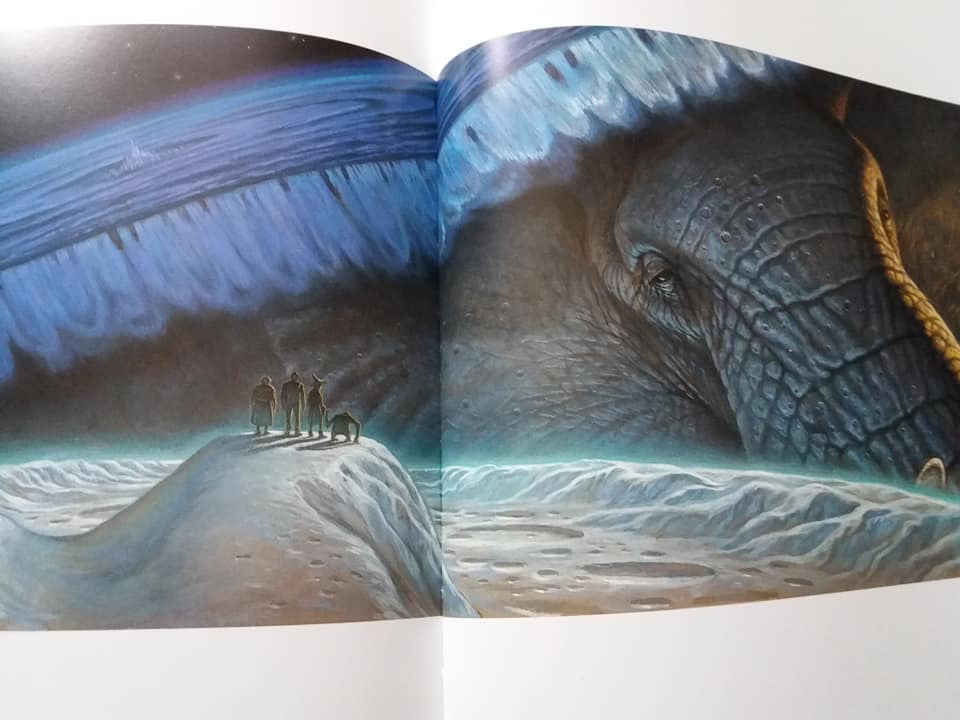 I also found this illustration more to the back and I don’t think I’ve seen it before but it is absolutely gorgeous. 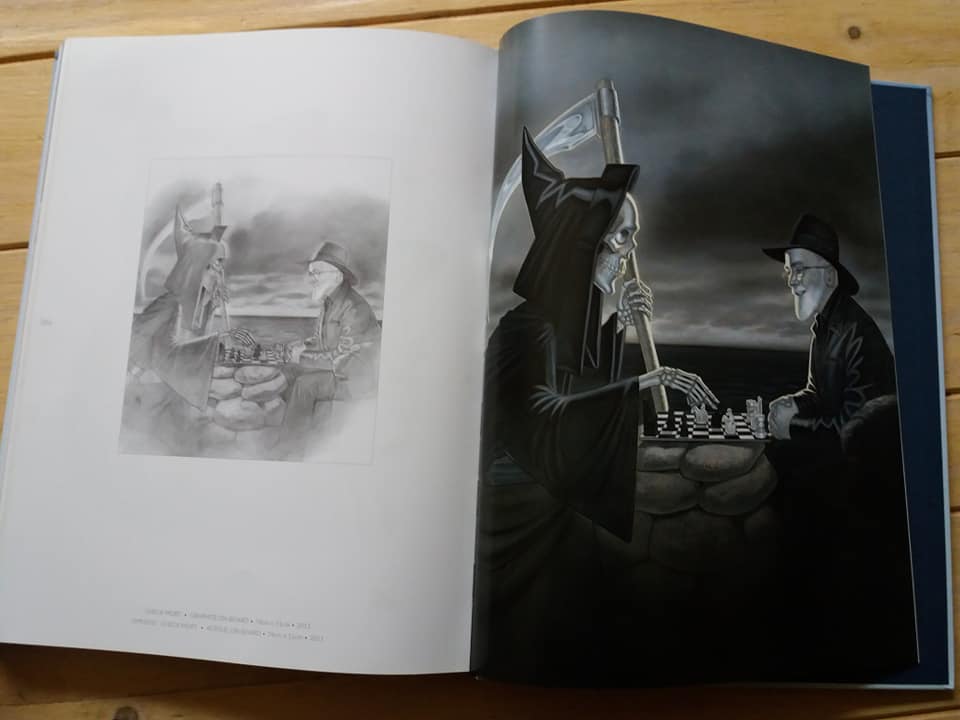 And of course I have to end it with this illustration of Death and Pratchett. It was drawn before Pratchett’s death but when it was already known he had alzheimer’s. It was the most shared picture when it came out that he had passed away and it still hurts to look at it.