April was a struggle. I think that is a good summary of my fourth month of 2020. The slump of 2020 just keeps on giving and I jumped right off the deep end. If that sounds depressing it was because that was how I felt. 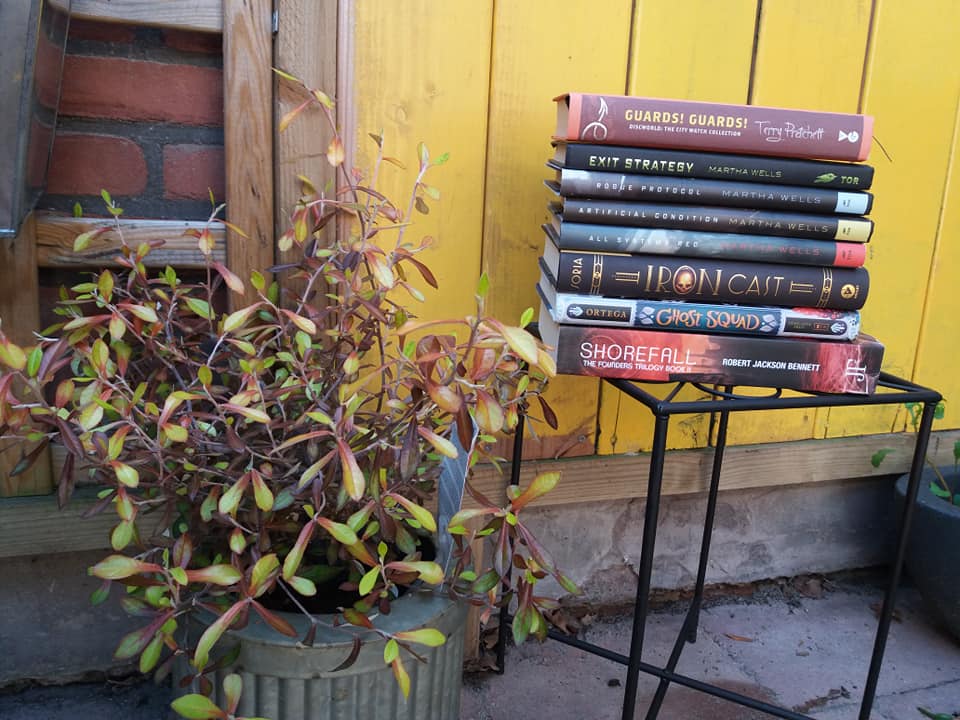 May Plan: I have a few big tomes on my tbr for Wyrd and Wonder so we will see if I can get to them.

May TBR: The Bone Witch | The Shadow of What Was Lost | Black Prism

*I’m just going to pretend that that weirdo old man was a shapeshifter because he had certainly changed his body lol. If you’ve read it you will know what I mean

⌘   I swear, my 3yo is going to give me early gray hairs. One night in April I was sitting with him on the couch, he turns to me in tears and says: I can’t get it out. I thought he meant a booger at first until I saw he stuck something up his nose!

It was still at the edge so I tried getting it out, but as I was alone with him I could not get him to be still enough and also pluck it out of his nose. He sniffed a few times and up up it went. We ended up at the emergency room in the evening to get it out. Not where you want to go during covid-19. Meh.

And of course as talented as he is, as I was putting down the phone, with discussing the situation with a doctor’s assistant of the emergency room if we needed to come in, he fell down the couch on a table and had a big ass bruise on his jaw. I cannot with this kiddo sometimes.

⌘  And this really wasn’t the best month for me either. I struggled hard. Especially nearing the end. (TW for depression and all that entails: highlight to read) I had a lot of negative thoughts that included thinking of ways to hurt myself and in one case I automutilated. I guess everything just kind of came out? I did start a process for treatment and had my intake this month. Currently working on the diagnosis portion but it is heading towards generalized anxiety disorder. Because of the above I have been pushed forward and will start treatment in May instead of being put on the waiting list after the diagnosis portion.

⌘ So this is just the weirdest time with everything. I haven been having a hard time with juggling all things like household chores. But also i am struggling to replying to comments on this blog. I hope you all know that I truly appreciate every comment I get, but at this point it just isn’t in my abillity to go back and reply on all your comments. I’ve been liking a bunch of them because I generally save comment notifications in my mail so that I feel like I have at least shown you all that I have seen them. And I appreciate them, I really mean that!

⌘ The May school vacation ends on May 11th and it looks like part time schools will be reopening. Likely Merijn will be returning to pre-school as well but not everything is set in stone.

Announcements and the Like
⌘ Raise the Banners | Wyrd and Wonder 2020
⌘ 23 Interesting Books Released in March, April, May and June| #toptentuesday 235
⌘ Bring Me Latinx | #ConSaborReadingChallenge 2020

Top Ten Tuesday
⌘ Next Books I’d Like to Borrow From the Library
⌘ Five Books I Enjoyed But Rarely Talk About
⌘ 10 Titles That Would Make Good Band Names
⌘ 23 Interesting Books Released in March, April, May and June

Discussions, Topics and the Like
⌘  Discworld Side Books | Turtle Recall Guide
⌘ Book Haul # 52 | Where I Keep on Haulin’ Ebooks…
⌘ How to Procastinate | Procastination Book Tag

⌘ Ratatouille | Movie | Rewatch
With Merijn. I think he liked it.

⌘ The Rise of the Planet of the Apes | Movie
I’ve been wanting to watch this one since it was rebooted, again. Now to go watch the rest.

⌘ The hosts of Wyrd and Wonder were interviewed on Armed with a Book.
⌘ CW from The Quiet Pond shares books about the magic of food. Yum! She also shares books by Muslim authors for #RamadanReadathon.
⌘ Jenna from Falling Letters shares 6 books by Asian-American and Asian-Canadian Authors she’s enjoyed but rarely talks about.

⌘ Liesbet from Zwartraafje organized A Hug Per Post that I took part in and summarized it in this post.