Not only does Discworld have many, many books as the main story, there are also countless side books that go along with the books. Now I haven’t quite read many of those yet but I do know which exist so here I am, giving you a guide to see what you would find interesting.

I will be doing a different post on Discworld Companion books because there are 24 on that list alone.

What stands out to me with all of these side books is that he very often collaberated with other authors and artists on them. It shows how invested others were and how I guess he enjoyed sharing his craft. He co-wrote a sci-fi series with Stephen Baxter and Good Omens with Neil Gaiman.  He did a lot of the books with Stephen Briggs who also has voiced many of the main Discworld books.

The Science of Discworld is a collaberation with Ian Stewart and Jack Cohen. While the name alludes to this being books on the science of the discworld books explained, these books are actually 4 stories on their own. They do focus more on the science part of Discworld, especially on the Unseen University and the Roundworld (which is Earth).

These books can certainly be read at any time during reading the main Discworld books. They only alude to an event here and there much like the Discworld books do so there is generally no problem in reading them at whatever point you wish.

The Science of Discworld | The Globe|Darwin’s Watch| Judgement Day 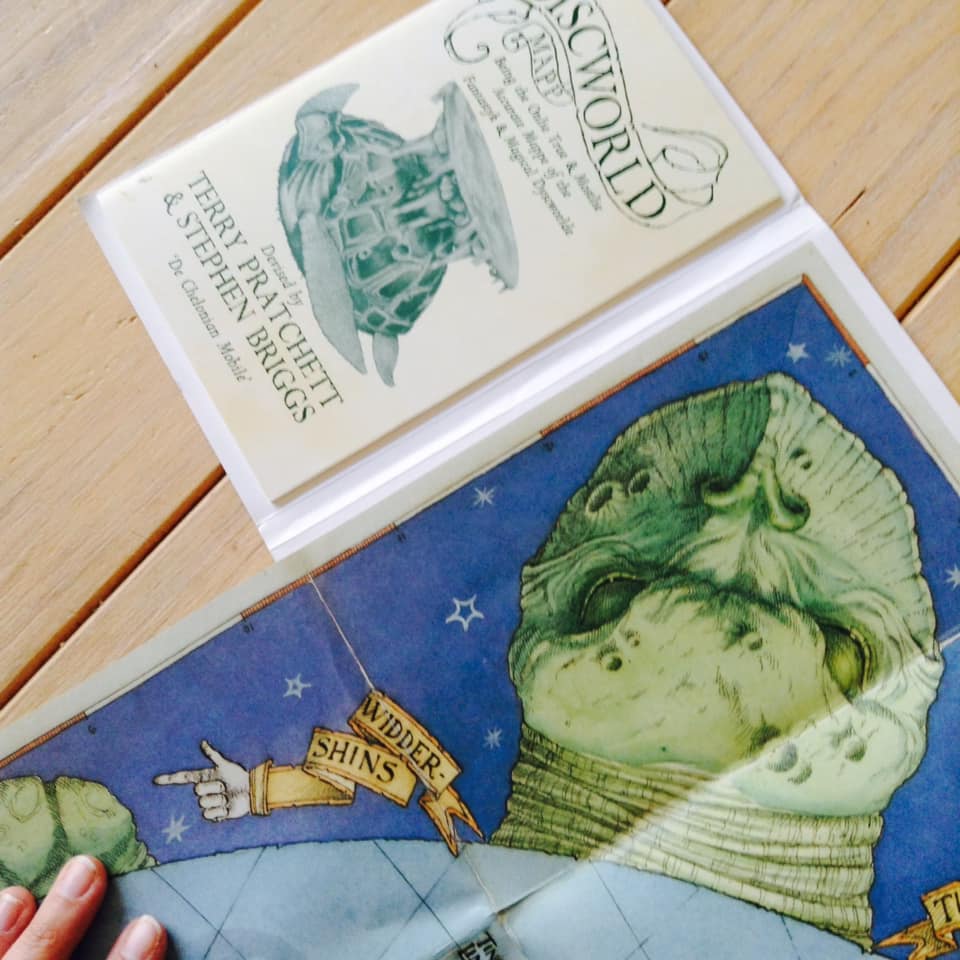 Over the years Terry Pratchett and Stephen Briggs have provided us with mapps of Discworld. First there was the Discworld Mapp that I own myself. A little booklet with a folding out map of Discworld. Very cool but this stemmed from 1995. Since then there have been maps for The Streets of  Ankh-Morpork, Deaths Domain andLancre which I think are all in the same vain as the first mentioned.

In 2012 The Compleat Ankh-Morpork released which is a book of more than 100 pages, that stands out from the above mentioned once. In 2015 the Compleat Discworld Atlaswas released and has also over a 100 pages.

I can’t tell you whether or not these are worth it because that is a very personal decision. If you are a very big fan I do think these are great to own and look through.

I think the biggest artbook to do with Discworld will be known to many. Terry Pratchett’s Discworld Imaginarium. Paul Kidby has been the Discworld artist since 2002 and many of his sketches and full colour illustrations are to be seen in this big art book.

He also created the Discworld Colouring book and the Artist Edition. He has also been creating the Discworld Calendars. You can see the 2020 one here.

The Plays and Comics

Over the years there have been stage adaptations of a variety of Discworld novels, and that have been published. Most have been adapted by Stephen Briggs and were produced by the Studio Theatre Club. Examples of adapted books are Mort, Guards! Guards!, Wyrd Sisters and Making Money.

There have also been adaptation in other formats. There is a Big Comic made of Mort. And The Colour of Magic, The Light Fantastic, Guards! Guards! and Small Gods were adapted to graphic novels.