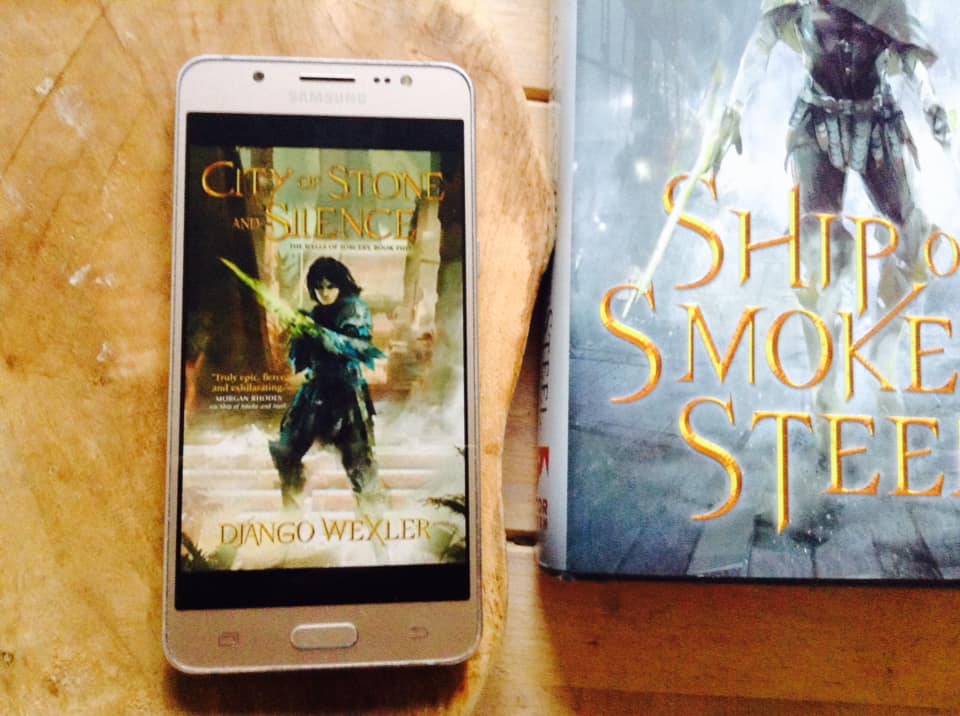 Thank you to Tor Teen and Netgalley for the review copy in exchange for an honest review. This does not change my opinion in anyway.

After surviving the Vile Rot, Isoka, Meroe, and the rest of Soliton’s crew finally arrive at Soliton‘s mysterious destination, the Harbor—a city of great stone ziggurats, enshrouded in a ghostly veil of Eddica magic. And they’re not alone.
.
Royalty, monks, and madmen live in a precarious balance, and by night take shelter from monstrous living corpses. None know how to leave the Harbor, but if Isoka can’t find a way to capture Soliton and return it to the Emperor’s spymaster before a year is up, her sister’s Tori’s life will be forfeit.
.
But there’s more to Tori’s life back in Kahnzoka than the comfortable luxury Isoka intended for her. By night, she visits the lower wards, risking danger to help run a sanctuary for mage-bloods fleeing the Emperor’s iron fist. When she discovers that Isoka is missing, her search takes her deep in the mires of intrigue and revolution. And she has her own secret—the power of Kindre, the Well of Mind, which can bend others to its will. Though she’s spent her life denying this brutal magic, Tori will use whatever means she has to with Isoka’s fate on the line…

I was so excited for Ship of Smoke and Steel last year but was disappointed when actually reading it. Don’t get me wrong, there were some great elements. The ghost ship, a bisexual mc, ff and mm relationships throughout the book.  But the story as a whole could not quite sell me over.

I am pleased to say that I enjoyed City of Stone and Silence a lot more. In this instance we get a dual perspective. Isoka of course, on the ship, and her sister Tori, in the city. Isoka is trying to find a way to get the ship turned which seems to become even more impossible when it docks somewhere on its own. Tori isn’t quite as sheltered as her sister believes and goes into the other wards to help in a hospital where she can. Unfortunately a big uprising is triggered, and she is right there, at the front.

These two story lines moving next to each other gave the book a bigger dynamic and deepened out the world considerably.  We get explanations about the ship and what was its purpose. We see much more of the city and the underlying problems.  There are many underlying themes here, but especially in Tori’s story where the unequalness of their world is zoomed in on with the wards.

I found hearing where the ship came from interesting and we got more interesting dynamics across the board between Isoka and the other characters in her story line. With just those that followed her (with the exception of her lover and friend) it was getting a little flat. But the addition of other characters created dynamics and reasons for them to question things.

Tori was a joy to follow. She is a little more subdued than Isoka but knows exactly what she wants. The one thing I found awkward is that Tori is 13 for most of the book, she turns 14 at some point, and this is written by a man who lets her mention masturbation (not that this is something that should not be mentioned) and lets her have a somewhat steamy kiss with a 16 year old. Don’t get me wrong, personality wise the couple works. But there is a difference developmentally wise between a 13-14 year old and a 16-17 year old. Adding on that it was written by a man made me feel very awkward. It wasn’t written badly but as a woman and a mom this didn’t quite feel right. Obviously this is a very personal thing however and other might not feel similar to me.

The book as a whole though felt like a step up from the first book and I can’t wait for the reunion between the sisters.