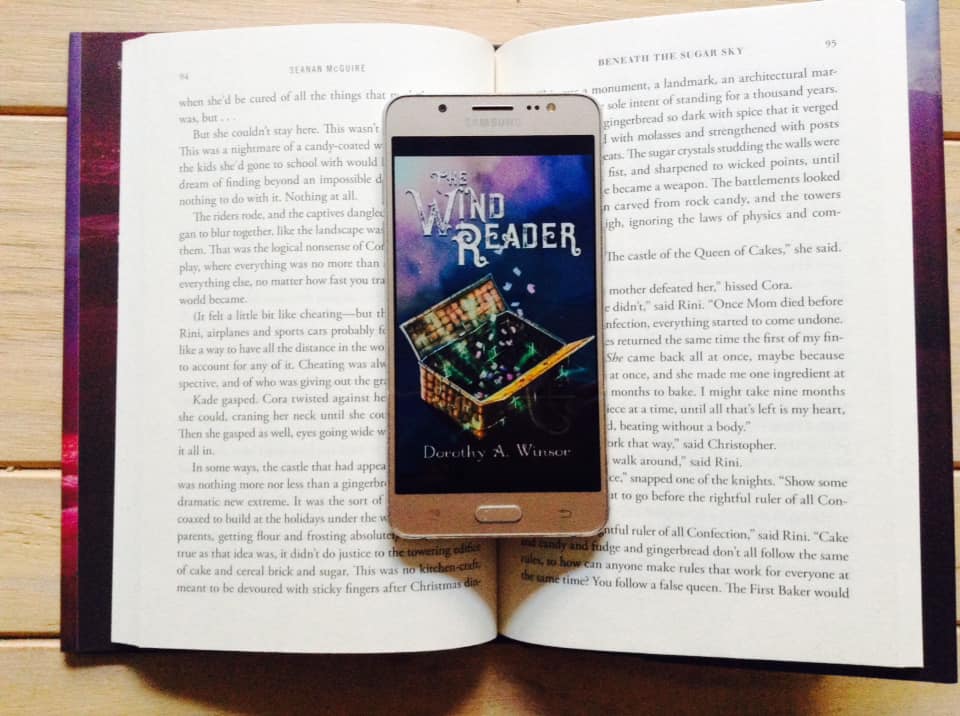 Thank you to Dorothy A. Winsor for the review copy in exchange for an honest review. This does not change my opinion in anyway.

Stuck in a city far from home, street kid Doniver fakes telling fortunes so he can earn a few coins to feed himself and his friends. Then the divine Powers smile on him when he accidentally delivers a true prediction for the prince.
.
Concerned about rumors of treason, the prince demands that Doniver use his “magic” to prevent harm from coming to the king, and so Doniver is taken–dragged?–into the castle to be the royal fortune teller.
.
Now Doniver must decide where the boundaries of honor lie, as he struggles to work convincing magic, fend off whoever is trying to shut him up, and stop an assassin, assuming he can even figure out who the would-be assassin is. All he wants is to survive long enough to go home to the Uplands, but it’s starting to look as if that might be too much to ask

Last year I was offered this book to read for review and just judging on that cover, I knew I had to read it. (I never claimed not to be shallow like that). Even if at the time I didn’t know what the image meant to the book.

The Wind Reader is a standalone fantasy that focuses on Donniver. Donniver loses his father during travel, and because of a quarantine he cannot go home to the rest of his family. Instead he has to resort to living on the street with two other teenagers. Of course that does not quite go without a hitch and when he accidentally ends up giving the prince a true prophecy he is drawn into the politics of the country and a big scheme.

This book is a very fine and solid fantasy that feels more towards the younger end of young adult. A great book to move from middle grade to young adult. It still has that true adventure feel that middle grade can have but doesn’t shy away from mentioning the harder topics of life as can be expected with young adult.

It is an easy book to get swept up into and one cannot help but feel for our 3 street kids. Donniver of course lost his father and has no way of getting to his family. Jarka has resorted to the streets as he cannot watch his cousin be abused by her husband. Dilly is an orphan who has lost her mother. There is a lot of hinting at (sexual) abuse in her past. Their friendship feels like the core of this book. Their loyalty, their vulnerability. Despite being thieves, as some would say, they do have morals. There is just no way out of their situation. And it is so easy to judge people for their decisions while you won’t even help them.

And there were more little things I liked in this book. Like Carl the personal guard to Prince Beran. Carl is fiercely protective and initially very suspicious of Donniver (and rightfully so). But his heart is in the right place. Beran wants what is best but as a prince in the court it is not easy to see what the outside world is like. And Carl’s father was a pure gem and I would have loved to have had more scenes with him.

However I do think that the world building lets this book down which is where my rating comes in. With just about 200 pages there was plenty of room to expand this story with world buidling. I don’t mean the plot, but to add things to help make this world come alive. I would have loved to have learned more about wind reading. How does it really work? And while it alludes to different kind of magic with prophecies (wysman) there just wasn’t much explanation.

The same goes for the world itself. The Outerlands seem to consist of 3 provinces/places. Rin the city, where the story takes place and the king resides. The Uplands where Donniver is from. Lac’s Holding, a place Rin has been in negotiation with for a while. It alludes to there having been one whole once at a time (which is why I say provinces) but that it fell apart. But there is not enough history in the book to have a good hold on what happened or why these negotiations are so important to Rin.

Overall though I do think this is a great book to pick up and dive into for an afternoon.