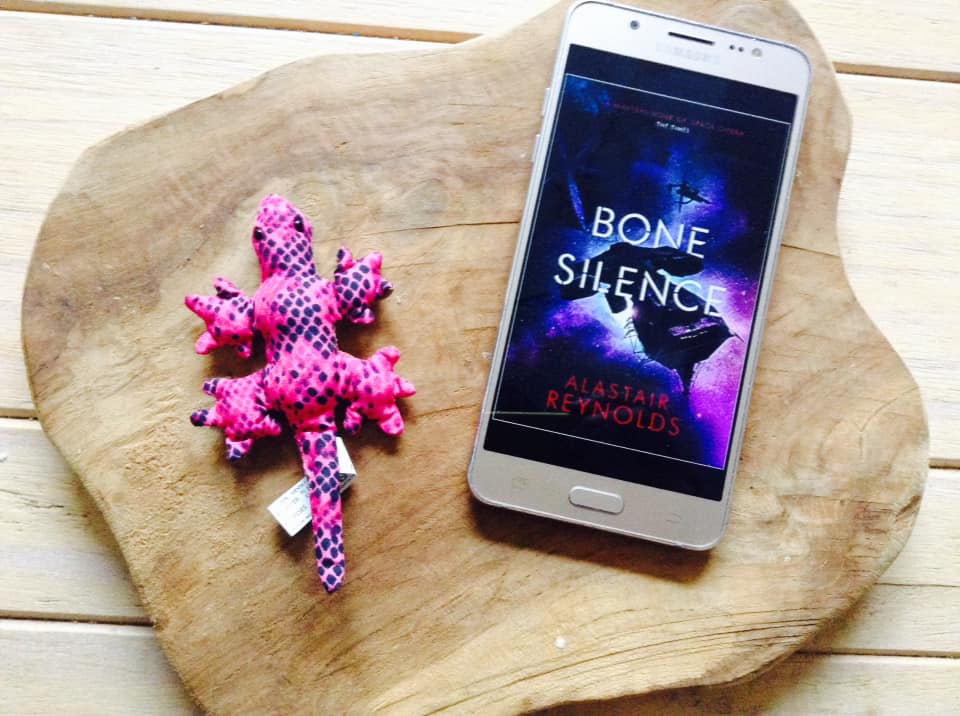 Thank you to Gollancz/Orion Publishing and Netgalley for the review copy in exchange for an honest review. This does not change my opinion in anyway.

Two sisters ran away from home to join the crew of a spaceship. They took on pirates, faced down monsters and survived massacres . . . and now they’re in charge. Captaining a fearsome ship of their own, adventures are theirs for the taking. But Captain Bosa’s fearsome reputation still dogs their heels, and they’re about to discover that, out in space, no one forgives, and no one forgets . . .

One of my most anticipated reads for the start of 2020 was Bone Silence. While not a lot of people talk about it, the Revenger trilogy has been a highlight to my sci-fi reading life. It kind of falls into the cracks because it got written as YA (It won the locus award for best young adult book in 2017) but a lot of people see it as Adult.  You all are missing out.

Bone Silence had a lot more pages than the first two installments for me. The others were around 300 if I remember correctly and the e arc edition I had was over 600 pages. That is a big increase. Even so it needed that to set up the playing field for the ending.  We also get the point of view of both sisters where in the previous installments it was from just one of their point of views (Revenger was Fura, Shadow Captain was Adrana).  Each of their story lines needed more space.

For a while I thought I was going to be rating this book 5 stars. However as we neared the ending and started wrapping up the story lines I did not get out of the ending what I think should have come out of the ending. It is the end of this trilogy and the author has said that for now he is done with our sisters. But there are still a lot of questions left to answer. There is nothing wrong with leaving some things open but in this case I feel that we got too little for the questions that were asked by the sisters in the previous book. Especially as it concerns the world building. I docked a whole star for this. It left me feeling unsatisfied.

Even so I did enjoy the whole of the book outside of that. It was a joy to see old favorites and having new people on board the mess that is the Ness train. Both sisters grew. Fura turned very differently because of what happened in Revenger. She became cold hearted but in this book I saw her slowly opening up again to those around her. Adrana on her end realized some of her own flaws.

All in all this is a trilogy that is well worth your time.