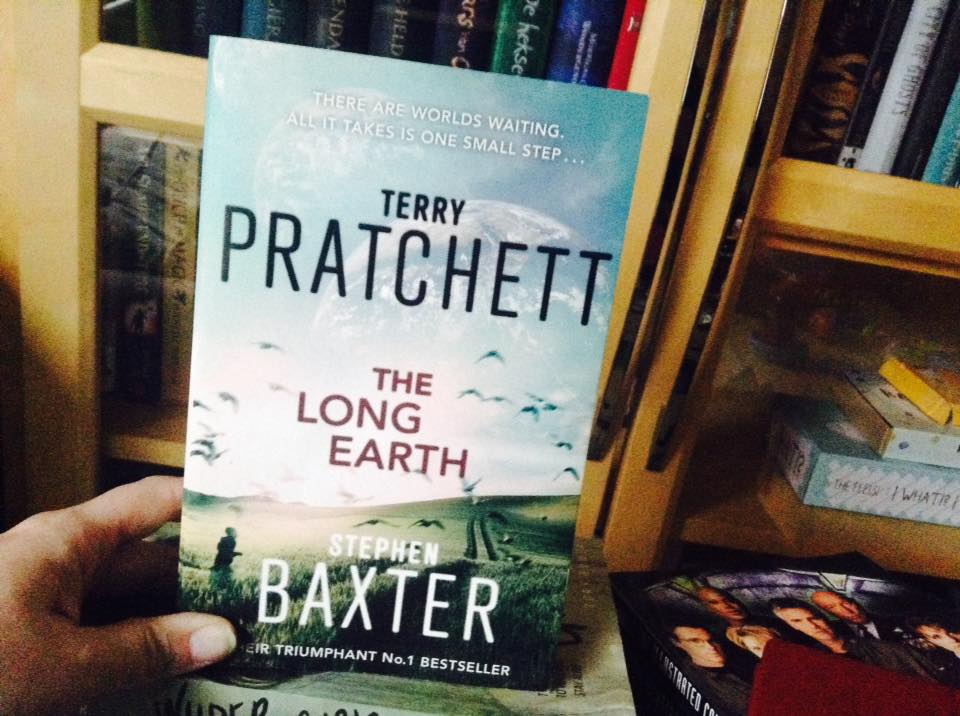 1916: the Western Front. Private Percy Blakeney wakes up. He is lying on fresh spring grass. He can hear birdsong, and the wind in the leaves in the trees. Where has the mud, blood and blasted landscape of No Man’s Land gone?
.
2015: Madison, Wisconsin. Cop Monica Jansson is exploring the burned-out home of a reclusive (some said mad, others dangerous) scientist when she finds a curious gadget – a box containing some wiring, a three-way switch and a…potato. It is the prototype of an invention that will change the way Mankind views his world for ever.
.
And that is an understatement if ever there was one..

The Long Earth is the combined effort of Terry Pratchett and Stephen Baxter. While I have been very familiar with Pratchett of course, this was my first time reading Stephen Baxter. And I quite enjoyed it. In the Long Earth people have learned the existence of stepping, where one can step into an alternate dimension of Earth. But these alternate dimensions don’t have humans like us. It is almost based on how the planets near us do not show signs of human life, in these dimensions, human did not develop either. But different animals and species did.

‘Boxing like a nineteenth-century steamboat captain with an artificial man, while multiple worlds flickered by beneath.’

We follow Joshua, a young man who is a natural stepper (where as others need a device).  He gets approached by Lobsang who is an artificial intelligence that claims to be a reincarnation of a monk. Lobsang wants to go further in to the Long Earth and research them. He wants Joshua to help him. In the end he does.

I enjoyed so many aspects of this story. The stepping, the viewing of different Earths, the interactions between Joshua and Lobsang (and later Sally). It wasn’t the plot that excited me or kept me going but it was the little humor and the characters. The plot itself wasn’t overly special. It was fine. But it gave way to the characters.

I will say that I got annoyed with how quickly Lobsang kept stepping through all the Earths and only analyzing from above. So much more could have been done with that part of the story. However this did get called out by both Joshua and Sally. So I feel that in the rest of the series we will be going onto the Earths they visit in more detail. I can’t wait for that.

‘That is the way to learn the world, Joshua. Whereas you two, rattling along in your great big penis in the sky, are learning nothing.’

I really enjoyed getting to know Joshua. He has been going back and forth through the Earths and our Earth for a long time, preferring to be alone. From some of his response I suspect he at least has a sensory processing disorder. But none of that is every confirmed. I liked how he grew up with nuns and that these nuns were peculiar and clearly very much loving of him. He even thinks about how he would love to talk some of the things through with one of the nuns in the story at some point and it made my heart warm that he had such caretakers.  So often nuns get depicted as frigid and hard asses on kids when in reality a lot of them do have good hearts.

All in all a very interesting story that I hope to continue next year.