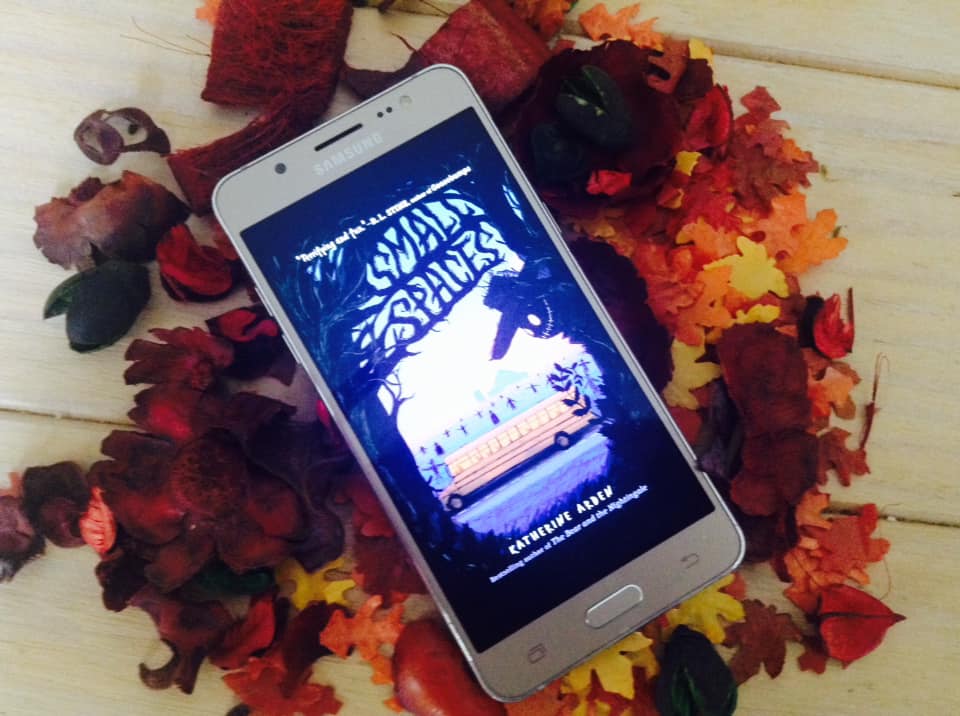 Thank you to Netgalley and G.P. Putnam’s Sons Books  for Young Readers for the review copy in exchange for an honest review. This does not change my opinion in anyway.

After suffering a tragic loss, eleven-year-old Ollie only finds solace in books. So when she happens upon a crazed woman at the river threatening to throw a book into the water, Ollie doesn’t think–she just acts, stealing the book and running away. As she begins to read the slender volume, Ollie discovers a chilling story about a girl named Beth, the two brothers who both loved her, and a peculiar deal made with “the smiling man,” a sinister specter who grants your most tightly held wish, but only for the ultimate price.
.
Ollie is captivated by the tale until her school trip the next day to Smoke Hollow, a local farm with a haunting history all its own. There she stumbles upon the graves of the very people she’s been reading about. Could it be the story about the smiling man is true? Ollie doesn’t have too long to think about the answer to that. On the way home, the school bus breaks down, sending their teacher back to the farm for help. But the strange bus driver has some advice for the kids left behind in his care: “Best get moving. At nightfall they’ll come for the rest of you.” Nightfall is, indeed, fast descending when Ollie’s previously broken digital wristwatch, a keepsake reminder of better times, begins a startling countdown and delivers a terrifying message: RUN.
.
Only Ollie and two of her classmates heed the bus driver’s warning. As the trio head out into the woods–bordered by a field of scarecrows that seem to be watching them–the bus driver has just one final piece of advice for Ollie and her friends: “Avoid large places. Keep to small.”

That I love the Winternight trilogy must come as no surprise to any of you. So when I got the chance to read and review her first middle grade book I had to take it. This is quite a different kind of ball game but still pretty good in different ways.

Ollie is eleven years old, living in a rural town where everyone knows everyone. She is still grieving the loss of her mom and does this through hiding away in books. When she sees a woman about to throw a book into a river she has to save it. When she dives into she uncovers a weird horror story that might turn out to become true.

For a middle grade this books it’s strength lies in its characters and the story itself. Ollie is easy to feel for, someone you want to protect despite her defensive nature. She does reflect on herself and her behavior and that makes her so likeable to me. She makes mistakes but she also sees them. I always find that important in characters and more so in middle grade.

The story is a basic horror story that takes place partially in the bus, surrounding forest and a farm. That alone should creep most of us out. I was also pleased that despite this being a horror middle grade there is barely any true violence in this story. There are so many ways you can creep someone out and you don’t need over the top violence for that.

However for me the downfall for this book was is that I was expecting more depth in the plot and a better reason as to why he wanted to take the children. Just because is so tiresome and I think Katherine Arden could have done better there that could have still appealed to middle grade readers as well.