So here I am again with yet more stats this month. But I am having fun with looking at all these numbers even though math isn’t exactly my strong suit.

Anyway someone *coughLaLaintheLibrarycough* asked for a comparison of 2018-2019 and I had to be extra and do all the years since I started doing these statistics of my shelves. I started back in 2016 though back then I didn’t do as many stats as I do now.

The Rise of All the Books 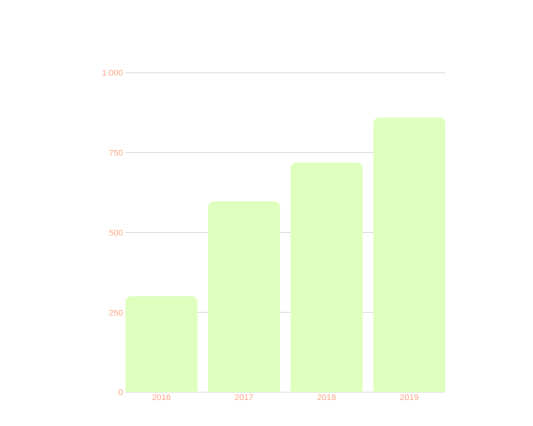 As you can see the amount of books has been growing every year. Especially between 2016 and 2017 there was a rise of 99% of books. It is a shame I don’t have any data for 2015 because that is the year I started blogging and I think there is a clear correlation there. However I can’t prove it now.

The increase of books has steadied now to about 20% a year compared to the year before. It will be interesting to see how that is next year. This is partly because I buy less books and I get more e arcs. But also I do unhaul some books. I think it is the balance of this that makes the increase not as big. I am also hoping that the increase of 20% will go down in the next few years.

I also think there is such an increase in 2017 because I had Merijn and a post partum depression and I think I dived into some retail therapy.

Interestingly my tbr stays reasonable around the same percentage when it comes to how many it is versus how many books I have. This is held up against the amount of books I own downstairs. Not upstairs.

Between the years is different. Between 2016 and 2017 there is a decrease of my tbr by 7%. Which is interesting considering the amount of books that were increased. I read 100 books in 2016 and 137 in 2017. So while that helped I don’t think that is the reason either. I think i might have bought more books I already had read at this point.

From 2017 to 2018 there is an increase of 45% on the tbr however so perhaps that is where all those unread books come from that I bough before haha. From 2018 to 2019 there is an increase of only 17% which is reasonably decent. However I hope that next year there won’t be an increase at all. I really hope to get the number back down somewhat. And no book hauls don’t work for me. 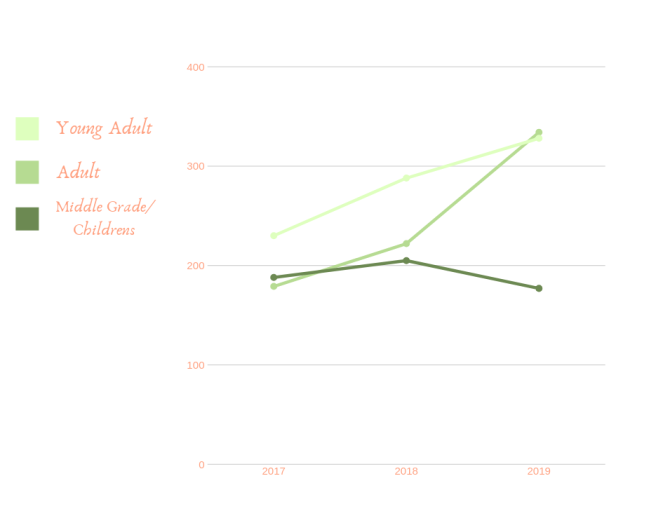 Something else that stuck out is the target groups and especially adult versus young adult. As you can see in the graphic Adult took quite a rise in the last year. Between 2018 and 2019 the amount of adult books rose with 50%! Young adult rose with 14% while middle grade an children’s fiction decreased with 13%. I think it shows clearly how my reading taste has been changing over the last year.

I have been more interested in adult fantasy in the recent bit. Some of those books I had been avoiding a little but no more! Its not that I don’t read young adult anymore because I do for sure. However I have also been more dissapointed by young adult because I just have more high standards for those books now. That is okay.

What else sticks out to you in these numbers? Do you keep track of your shelf statistics? Do you think it will show some of your habits well if you did?