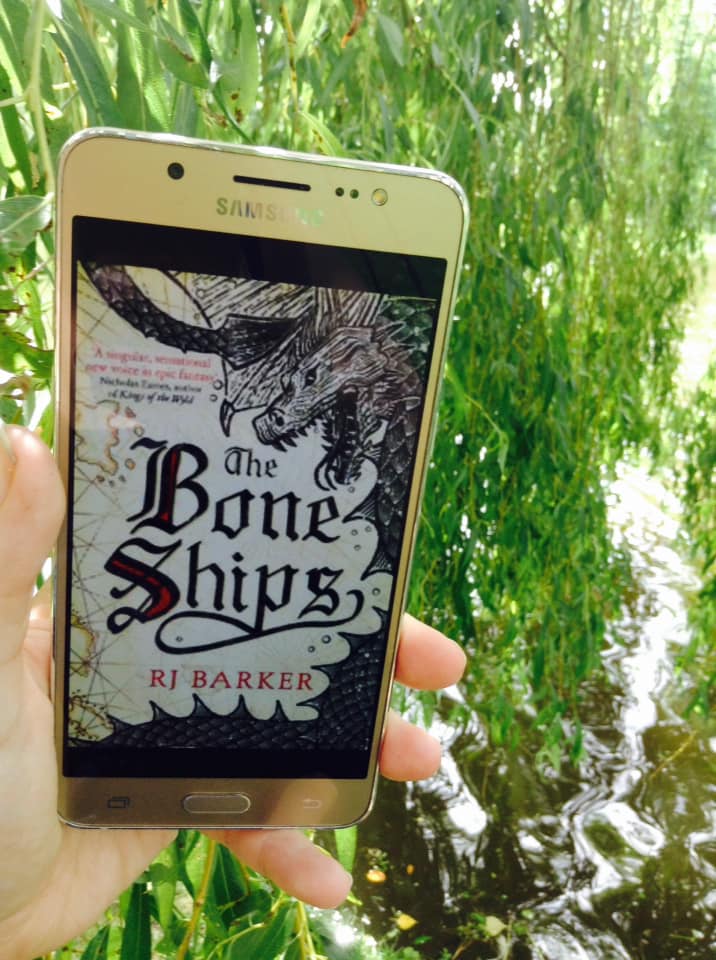 Thank you to Netgalley and Little Brown Book Group UK for the review copy in exchange for an honest review. This does not change my opinion in anyway

A crew of condemned criminals embark on a suicide mission to hunt the first sea dragon seen in centuries in the first book of this adventure fantasy trilogy.
Violent raids plague the divided isles of the Scattered Archipelago. Fleets constantly battle for dominance and glory, and no commander stands higher among them than “Lucky” Meas Gilbryn.
But betrayed and condemned to command a ship of criminals, Meas is forced on suicide mission to hunt the first living sea-dragon in generations. Everyone wants it, but Meas Gilbryn has her own ideas about the great beast. In the Scattered Archipelago, a dragon’s life, like all lives, is bound in blood, death and treachery.

With a starting line in the synopsis of ‘A crew of condemned criminals embark on a suicide mission to hunt the first sea dragon seen in centuries’ there was no way that I was not going to be excited about this. A group of misfits who are rightly not good are my favorite kinds of crews and dragons make everything better. The cover is also stunning. Unfortunately I am disappointed by this book.

Our book focuses on one main character, Joron in third person point of view, who feels like he is mainly there to show us how things started. He is the man looking on someone great. The one who will become a legend. That can be a very interesting dynamic but I don’t think it entirely worked out the way the author wanted too. Especially in the first half of the book I was left increasingly bored as we get a lot of Joron’s thoughts and endless feeling sorry for himself.  It was hard to get through that to see the story when up to 40% there was little direction to the story.

It doesn’t help that world building wise, this world is complicated with many different terms to learn and remember. Some of it was dumped on us at the start and it took a lot of time to get a good grasp on this world as a whole.

After that however the story did start to pick up and especially the last 20% of it was very good and captivated me. I wish the whole book had been like that.

I think the books downfall is that for the longest time I did not care about the characters and even by the end, I only cared a little. One could have died and I would have just said: ‘Oh, too bad.’ That is not what you want to achieve as a writer. Especially having Joron as a main character made this book less appealing to me because I could not get to liking him. He was an alcoholic when we met him and while there was some mention of his withdrawal I feel like there really wasn’t enough of it to make it feel realistic.  His development however beyond that was somewhat interesting to see. From being inadequate to being a good second to his captain.

There was however one section where he talked about suicide but that he was from an island where they were strong of character so he would never do that. It was infuriating. As someone who is depressed that hurt, as if I am not strong for how I feel, for having had those thoughts. And also not how it works. The implication that those who commit suicide or think it are weak is wrong.

Meas is the character who we are looking on who might become a legend, which in a way she already is as everyone knows her. She comes from a difficult position of power but seems to want peace. As we are looking upon her it is harder to get a good grasp on her. It makes her mysterious and there is still a lot left to discover with her.

I think I liked some of the side characters more, especially those that allied himself with Joron rather quickly. Their loyalty was inspiring to be honest.

And the dragon, well we didn’t get as much as I would have liked (but when don’t I complain about that?) but the depiction of this sea dragon was wonderfully epic and beautiful. I was pleased.

So all in all I wasn’t quite taken with this book. However the ending redeemed itself enough for me to be once again curious where this as a whole will be moving forward to. So I would like to read the sequel to this.