Now that Inge from Of Wonderland tagged me in a cat tag I thought I’d start it off with my kitties. Later I was also tagged by Tânia from My Lovely Secret. I promise, if you scroll you’ll get to the tag. At some point.

I might not talk a lot about her but I do have one lovely cat. Her name is Mika(do) and she is such a stubborn thing. We got her in November 2012 (but she is from June that year) which makes her the ripe old age of 7. I kid. At first she was an indoors cat, I think mostly because our older cat was also an indoor cat. But once he passed away she went for the outside life. She fights. I haven’t seen another cat near our backyard for moooooonths.

Recently we also adopted a kitten from the animal shelter. Aiko we have called her. She has been with us for 3 weeks now and has settled in nicely. From a shy little thing to a cuddle pusher who wants to play and eat all our food. It is funny to see that Merijn has figured out how to play with her from time to time by pulling a shoe lace behind him. They’ll be growing up together more and it will be interesting to see how their relationship progresses. 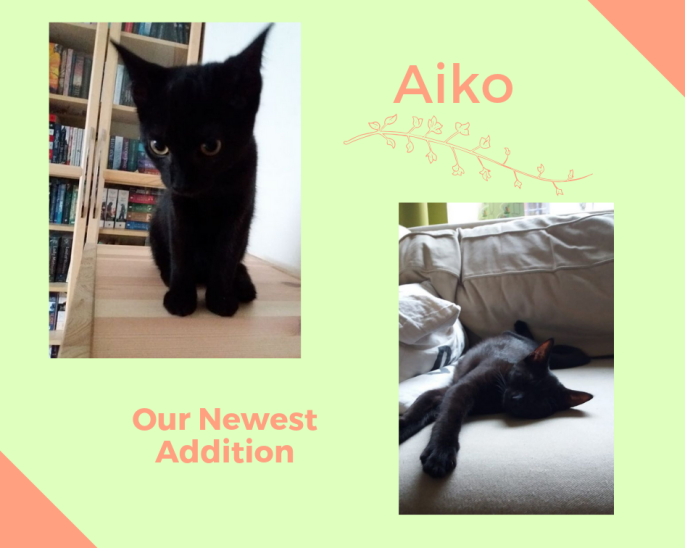 Even though Amigo isn’t with us anymore I always feel the need to talk about him when people ask about pets. I love Mika but I had a special bond with Amigo. He was there with me during the years I was stuck at home with my voice. Always. Even though when we got him he was this dominant, unpredictable cat that would strike out at you at any given moment, the longer he stayed with us he mellowed out. We think he was abused in his first home and got stability with us. Within a year you wouldn’t have recognized his personality.

He was old. He got sick. Especially during my pregnancy he grew sicker and needed medication. He only took them from me and when i was in the hospital for the c-section he didn’t get any meds. He never recovered from it and I still blame myself for that. My biggest regret is that he never got any true interaction with Merijn. He would have loved him (and disciplined him on how to touch a cat haha). Excuse me while I cry ugly tears now.

PURR: AS CATS DO THIS WHEN THEY’RE HAPPY OR RELAXED, WHAT IS THE BOOK THAT MAKES YOU HAPPIEST OR RELAXED?

I get relaxed from just reading in general, as long as its a good book and the characters don’t do too stupid things. But books where I don’t have to think too much and make me laugh do have that effect more so I would say Enchanted Inc. by Shanna Swendson. Could endlessly reread that one.

SLEEP: WHAT WAS A BOOK THAT PUT YOU TO SLEEP OR WAS JUST BORING?

Fire and Blood by George R.R. Martin. The Targaryen History book. It was massive. I wasn’t even at 25% and I thought it would never end. It wasn’t going to, so I dnfed.

TWITCH WHILE DREAMING: HAVE YOU EVER DREAMT OF A BOOK YOU READ?

Oh good question. I don’t know to be honest. I tend to forget my dreams really quickly.

SEEMS TO PLAY NICE… UNTIL THE CLAWS ARE OUT! WHICH BOOK HAD THE BIGGEST PLOT TWIST?

CUDDLES: WHICH BOOK CHARACTER WOULD YOU GIVE A HUG TO?

Eri and his warbeast from The Bitter Twins.

CATNIP: WHAT’S A BOOK THAT MADE YOU HAVE WARM AND FUZZY FEELS?

Unfortunately quite recently that was also the Jen Williams books, haha. She just has a way with writing characters that gives you that warm blanket feel. And then she comes to steel it away.

Oh how much time do you have? The Golem’s Eye by Jonathan Stroud, Magnus Chase by Rick Riordan, Wintersmith by Terry Pratchett, Tess of the Road by Rachel Hartman, Foundryside by Robert Jackson Bennett, Jade City by Fonda Lee, Sorcerer to the Crown by Zen Cho, The Long Way to a Small, Angry Planet by Becky Chambers, The Winnowing Flame trilogy by Jen Williams…

GETTING THE CAT: HOW DID YOU FIND YOUR FAVORITE BOOKS?

I found The Golem’s Eye when I was at a train station and found the book at random in the book store there. This was way back in 2008 I think. Magnus Chase, Wintersmith, Tess of the Road, The Winnowing Flame I all found because I already read previous books by these authors. Foundryside I found through doing a blog tour. Sorcerer to the Crown was another random pick up at a book store. Jade City and The Long Way were recs from the book community.

A Discovery of Witches. I am sorry. I rated it 2,5 stars at the time but the more I see people raving about how incredibly well written it is the more my eye brows twitch.

BEING IN PLACES THEY SHOULDN’T: LEAST FAVORITE CLICHÉ?

I’ll say insta love and love triangles. However if written well I can forgive them.