As always I’ll update these with the correct links as the posts publish.

And here we are with the last shelf and the smallest one at that. It is the blue limited Billy Ikea Shelf, before you know, they got the yellow which would have fitted with my aesthetic so much better. 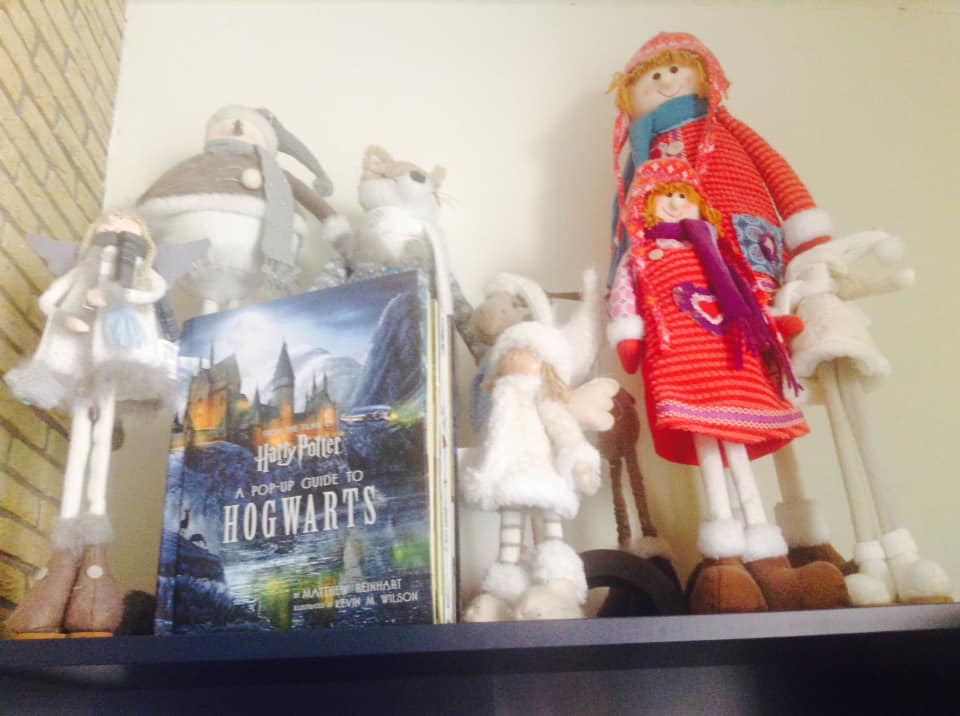 Look at all my pretty puppets. Still there because otherwise Merijn destroys them. And I have the Harry Potter: A pop up guide to Hogwarts there because I do love that cover. 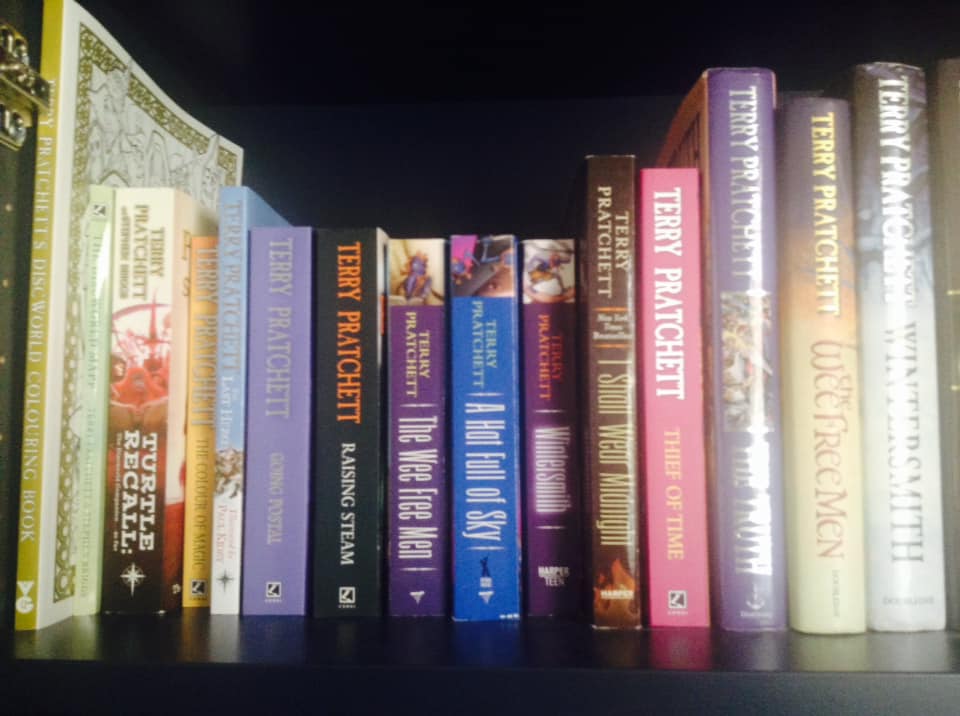 Of course we start with Terry Pratchett. First up is the colouring book that I am of course never going to colour, lol. I might copy a page here or there if I feel like it. Then i have The Discworld Mapp from 1995 and Turtle Recall: The Discworld Companion…So Far.

Then we start with the actual novels. I have seperated my gollancz editions from the other hardcovers and paperbacks as you can see. They are on the shelf below this. As for shelving, I decided to mostly shelf per arc. And Paperback and Hardcover.

Let’s start with The Colour of Magic and The Last Hero, both from the Rincewind arc. The Last Hero is illustrated by Paul Kidby. Then we have the Industrial Revolution/Moist von Lipwig arc with Going Postal and Raising Steam.

Tiffany Aching is one of my favorite arcs with The Wee Free Men, A Hat Full of Sky, Wintersmith and I Shall Wear Midnight. The last paperback is Thief of Time, the last one in the Death arc.

The first hardcover is The Truth, an industrial revolution book. And next to that are two hardcover copies of The Wee Free Men and Wintersmith. 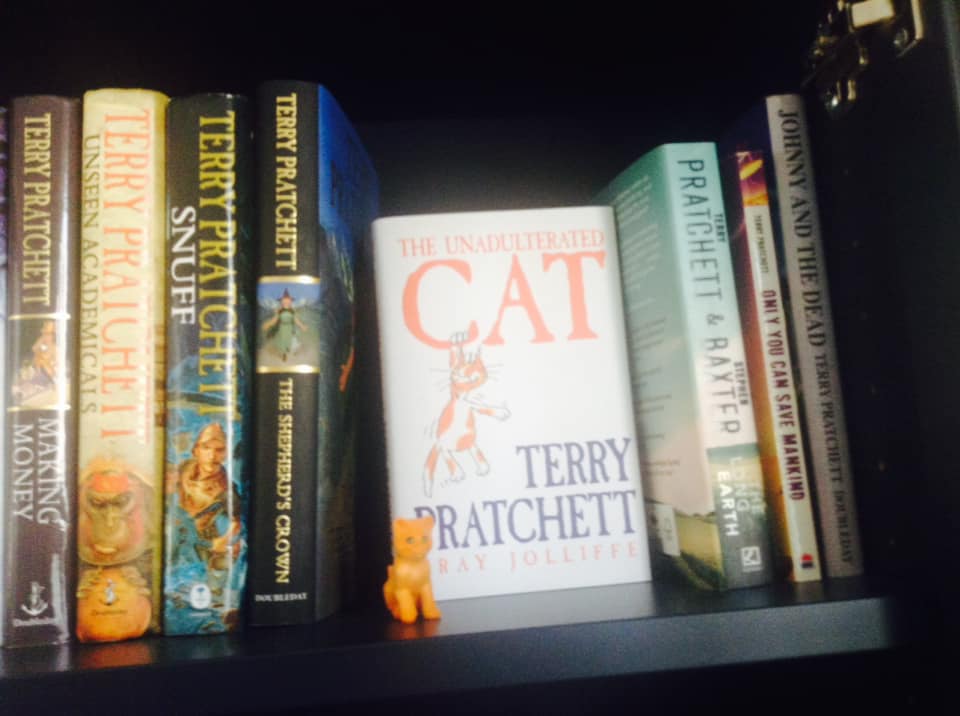 Moving on we have Making Money, an industrial revolution/moist von lipwig book. Unseen Academicals is another Rincewind novel. And Snuff is a City Watch novel. The Shepherd’s Crown is a Tiffany Aching novel and the last Discworld book to be published, after the death of Terry Pratchett.

The Unadulterated Cat is a cute novella about cats. The Long Earth is the start of a Sci-Fi series he wrote with Stephen Baxter. Only You Can Save Mankind and Johnny and the Dead are the first two books of the Johnny Maxwell books. 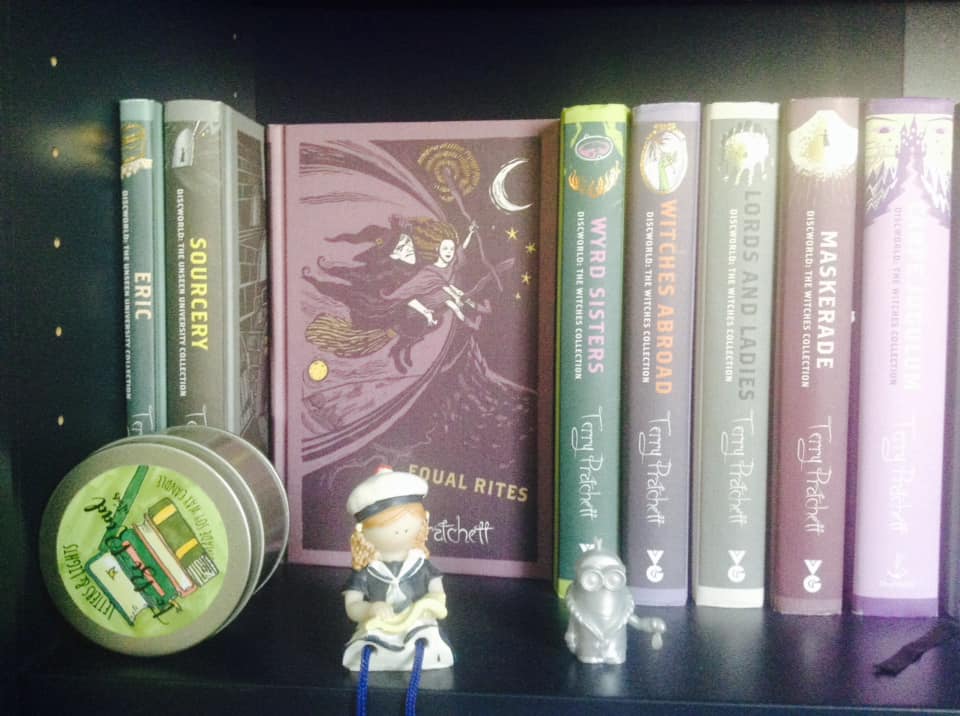 Now we get to the pretty Gollancz covers. These are set by arcs. And I started with Rincewind, who else. Eric is one I have read. Sourcery not yet.

Then we have The Witches arc, the arc I need to be reading on with. I have read Equal Rites. Then we have Wyrd Sisters, Witches Abroad, Lords and Ladies, Maskerade and Carpe Jugulum. Carpe Jugulum is by Doubleday and not Gollancz because Gollancz only had the publishing rights up to about half of Discworld. 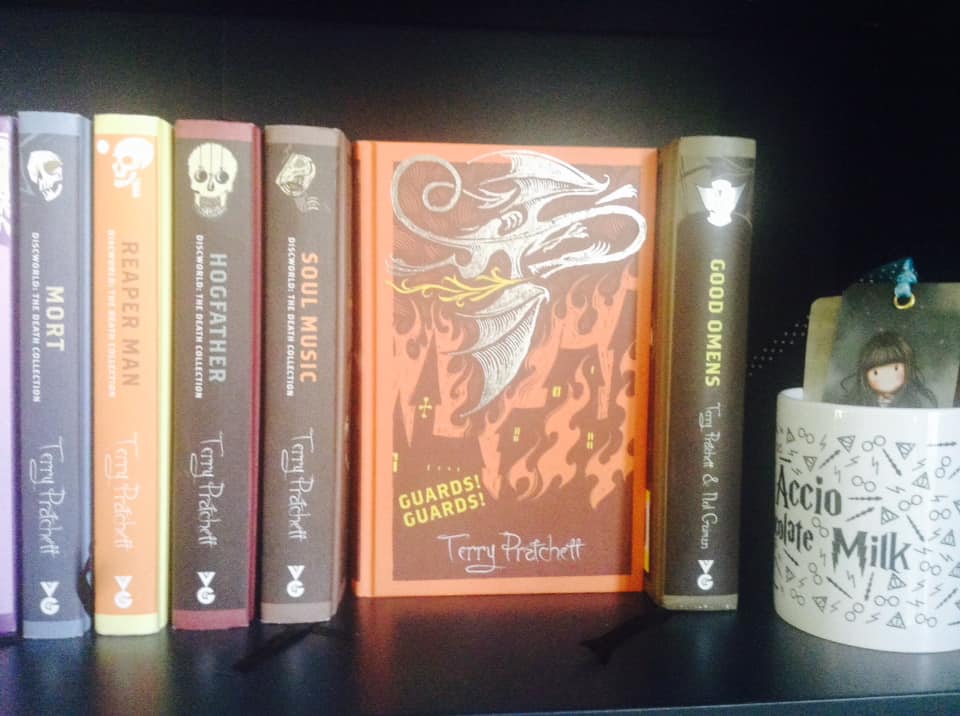 Moving on we have the Death arc which is Mort, Reaper Man, Hogfather and Soul Music. Thief of Time is next in line but I don’t have it in this edition yet. Guards! Guards! is the first City Watch book. Look at that stunning cover. I am in love.

And lastly you see Good Omens which he wrote with Neil Gaiman. Of course not Discworld but it was released in this similiar edition and it just had to be here. 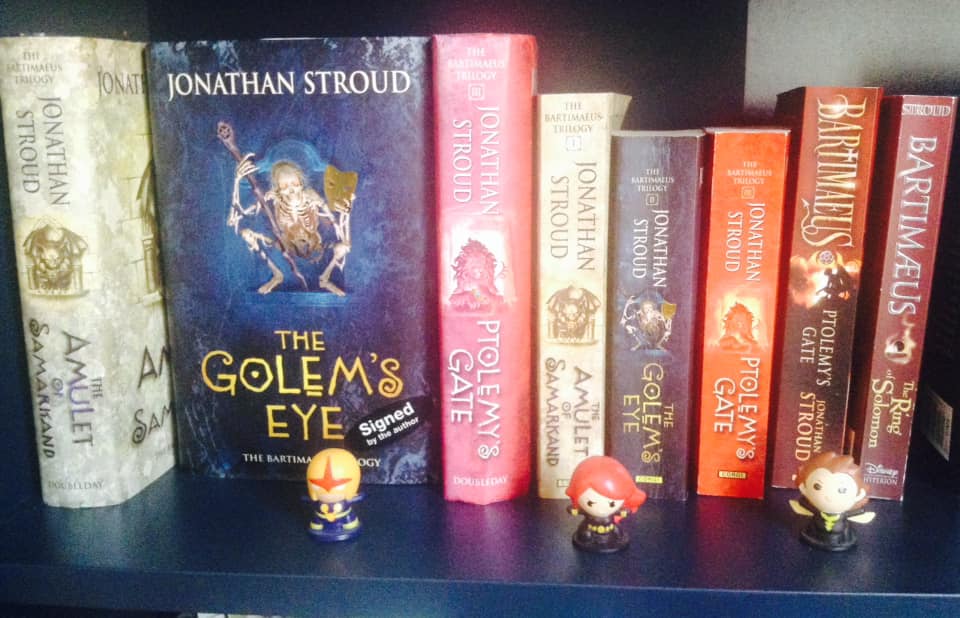 Here are my Bartimaeus books by Jonathan Stroud. I started with the 3 paperbacks (The Amulet of Samarkand, The Golem’s Eye and Ptolmemy’s Gate) , then my cat put holes in a copy of Ptolemy’s Gate and I got a matching one to The Golem’s Eye. The Ring of Solomon was the last paperback I got I think. But then I found signed The Golem’s Eye and thanks to La La in the Library I got the other two in matching hardcover as well. I am still very thankful for that. ❤ 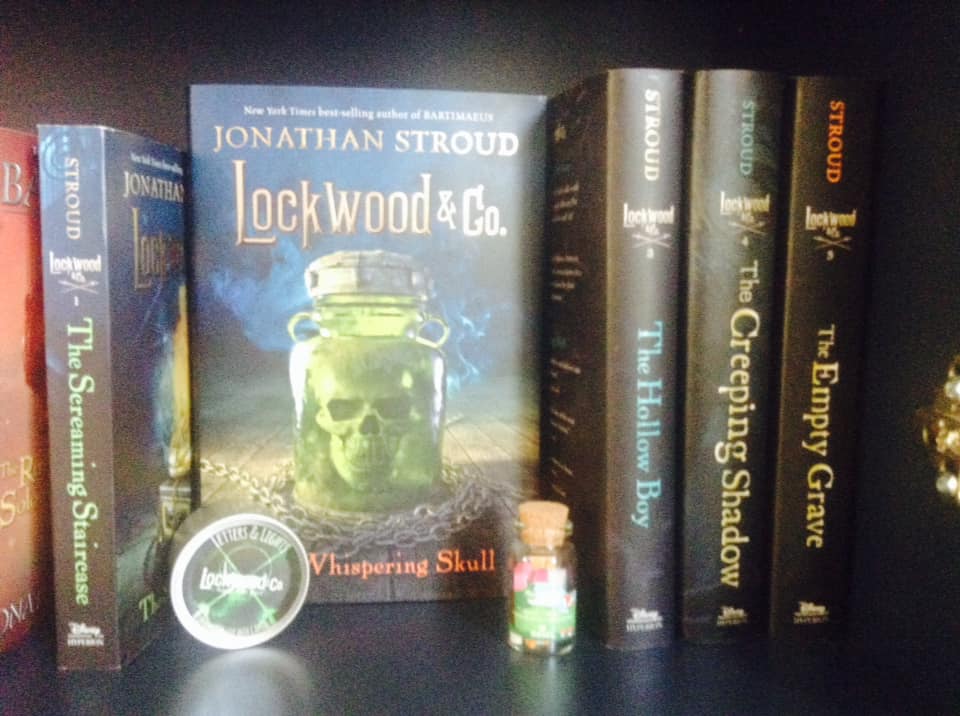 And onto his other series, Lockwood & Co. Which of course consists of The Screaming Staircase, The Whispering Skull, The Hollow Boy, The Creeping Shadow and The Empty Grave. I am looking forward to rereading these again in a few years. 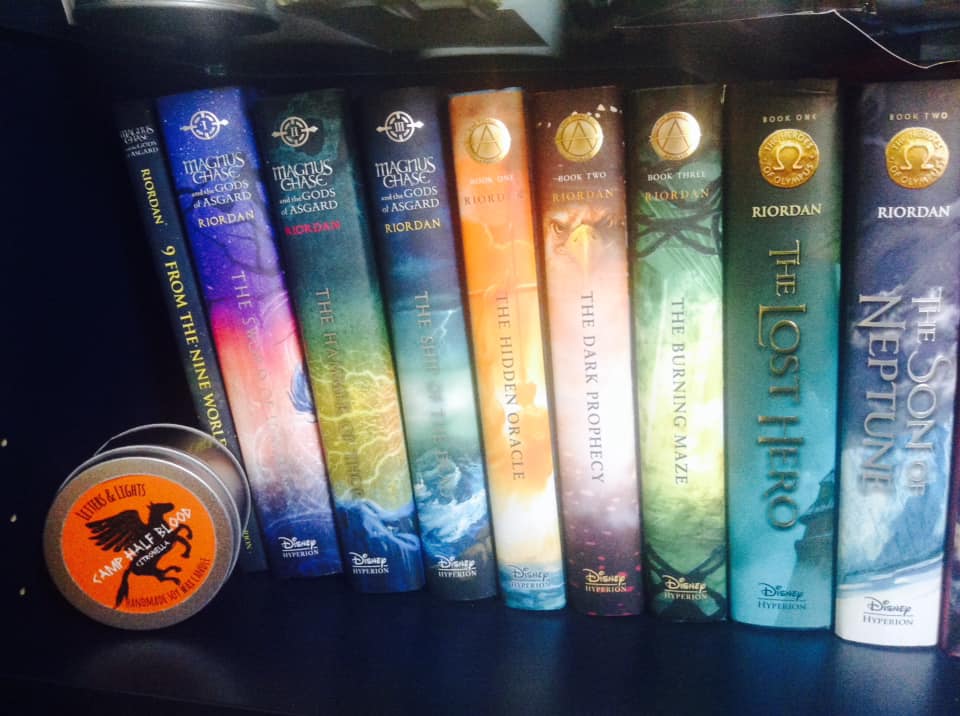 The next shelf is filled with Rick Riordan of course and is almost entirely full. We start with 9 From the Nine Worlds, a companion to Magnus Chase. Then we have the Magnus Chase trilogy with The Sword of Summer, The Hammer of Thor and The Ship of Destiny.

Then we have the first three books in the Trials of Apollo series. I am eagerly awaiting the fourth book. So far we have The Hidden Oracle, The Dark Prophecy and the Burning Maze.

Then starts The Heroes of Olympus with The Lost Hero and The Son of Neptune. 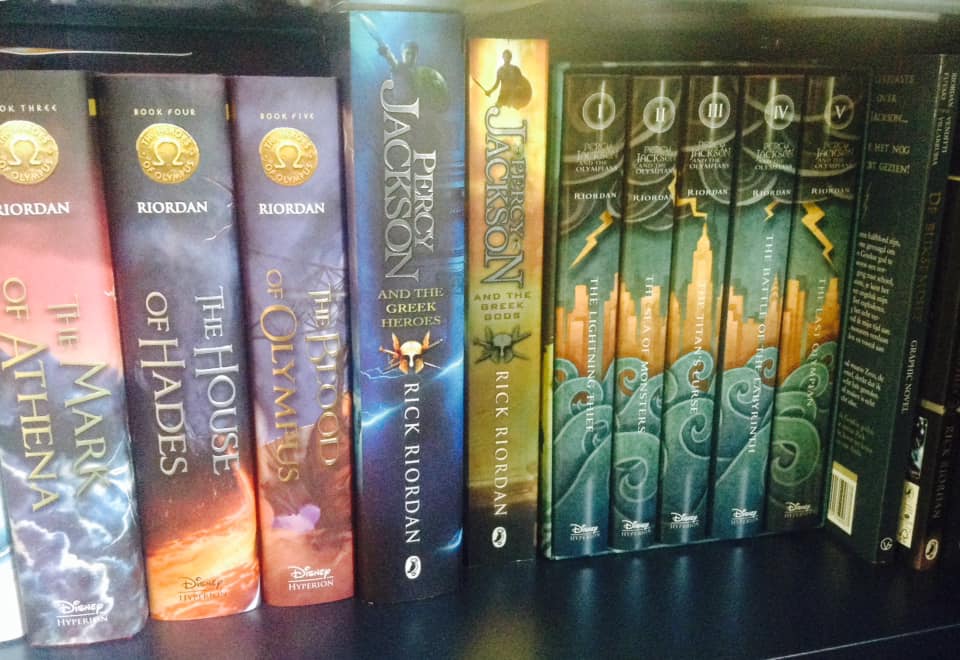 The Heroes of Olympus continues with The Mark of Athena, The House of Hades and The Blood of Olympus. Two companion books to Percy Jackson are The Greek Heroes and The Greek Gods. I have the Percy Jackson box which of course consists of The Lightning Thief, The Sea of Monsters, The Titan’s Curse, The Battle of the Labyrinth and The Last Olympian.

Lastly I have The Demigod Files and the graphic novel of The Lightning Thief. 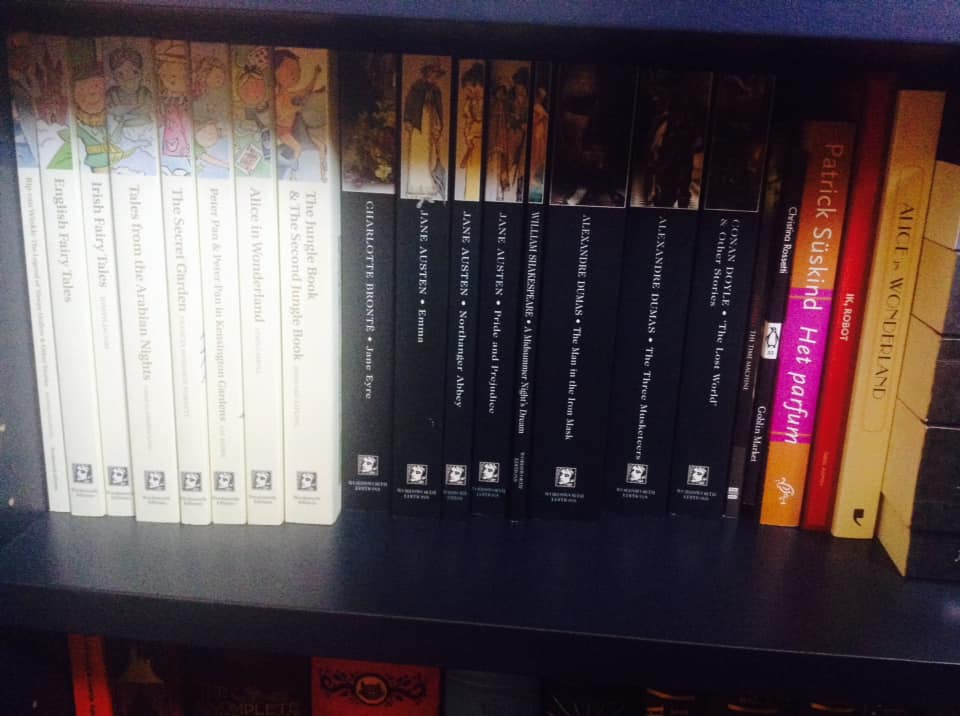 And finally the very last section of this book shelf tour. The classics. Please forgive the dark quality of the photos. The couch is before this bookshelf and these are on the two lowest shelves so they get little light in comparison to the others.

The white spined Woodsworth Classics. Lets start with one I’ve read already:Rip van Winkle, The Legend of Sleepy Hollow and Other Stories by Washinton Irving.

Then we have some fairy tales. English Fairy Tales, Tales from the Arabian Nights and Irish Fairy Tales. Unfortunately The Secret Garden by Frances Hodgson Burnett is stuck inbetween because I apparently suck at shelving things in proper order.

Peter Pan and Peter Pan in Kensington Gardens by J.M. Barrie is one classic I really disliked. But it fits with these editions so I am keeping it for now. Next we have another Alice in Wonderland edition. And finally I have The Jungle Book and the Second Jungle Book by Rupyard Kipling.

Then the black ones. First I have The Man in the Iron Mask and The Three Musketeers by Alexandre Dumas. Next to that is The Lost World and Other Stories by Arthur Conan Doyle. I’m mostly interested in this one for The Lost World because dinosaurs.

Jane Eyre by Charlotte Bronte is next. Then I have three books by Jane Austen which are Emma, Northanger Abbey and Pride and Prejudice. The last mentioned is one I have read as an ebook and enjoyed. Lastly of the black spines I have A Midsummer Night’s Dream by William Shakespeare. 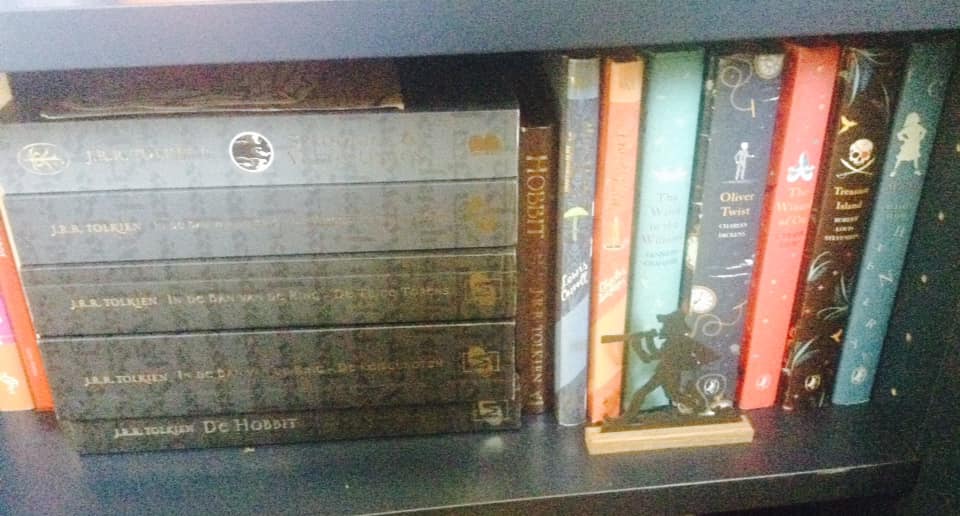 Next on the shelf are some of my Tolkien books in Dutch. At the bottom of the stack we of course have The Hobbit, The Fellowship of the Ring, The Two Towers and The Return of the King. The top one is I think a translation of The Book of Lost Tales but I am not a 100% sure. Then we have a leatherbound edition of The Hobbit.

Moving on we have some lovely children books in pretty editions. The first is yet again an edition of Alice in Wonderland. 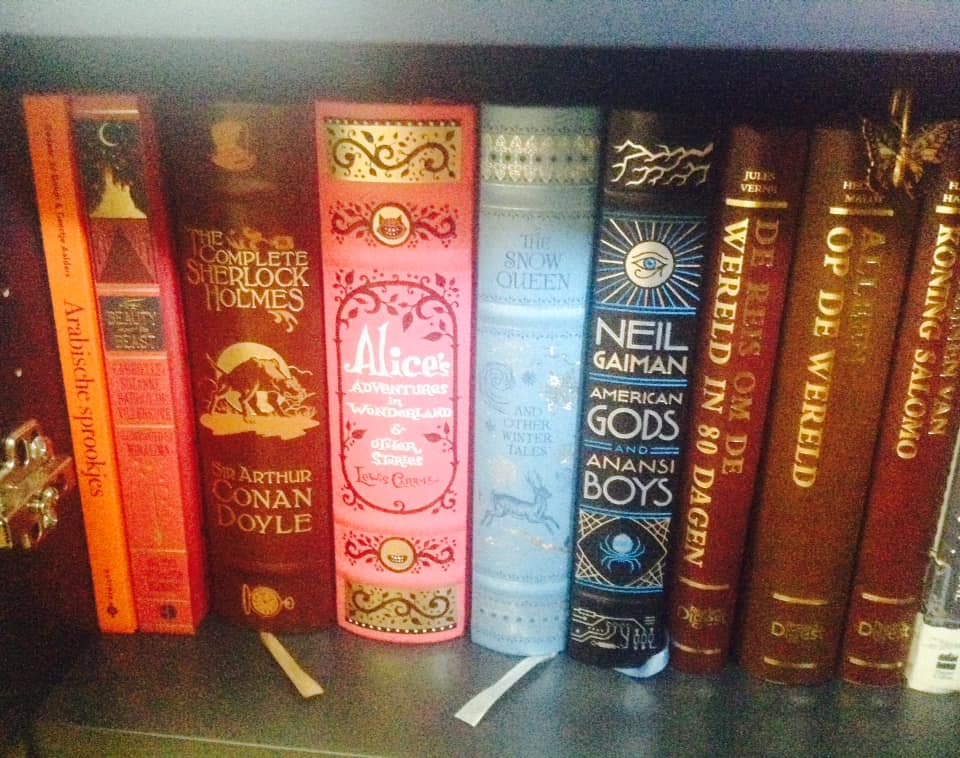 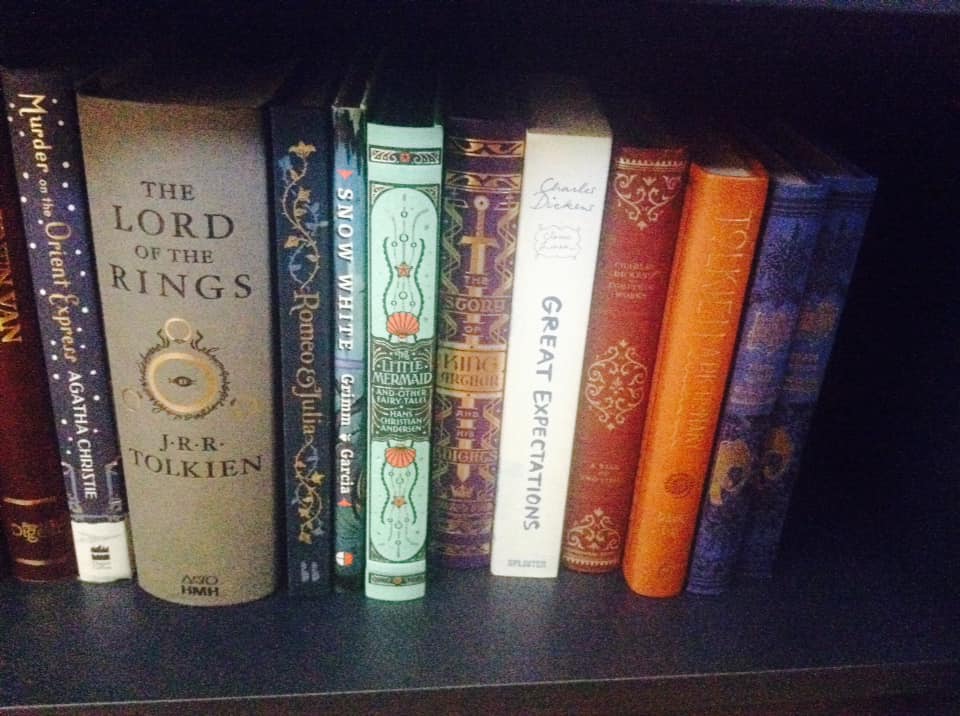