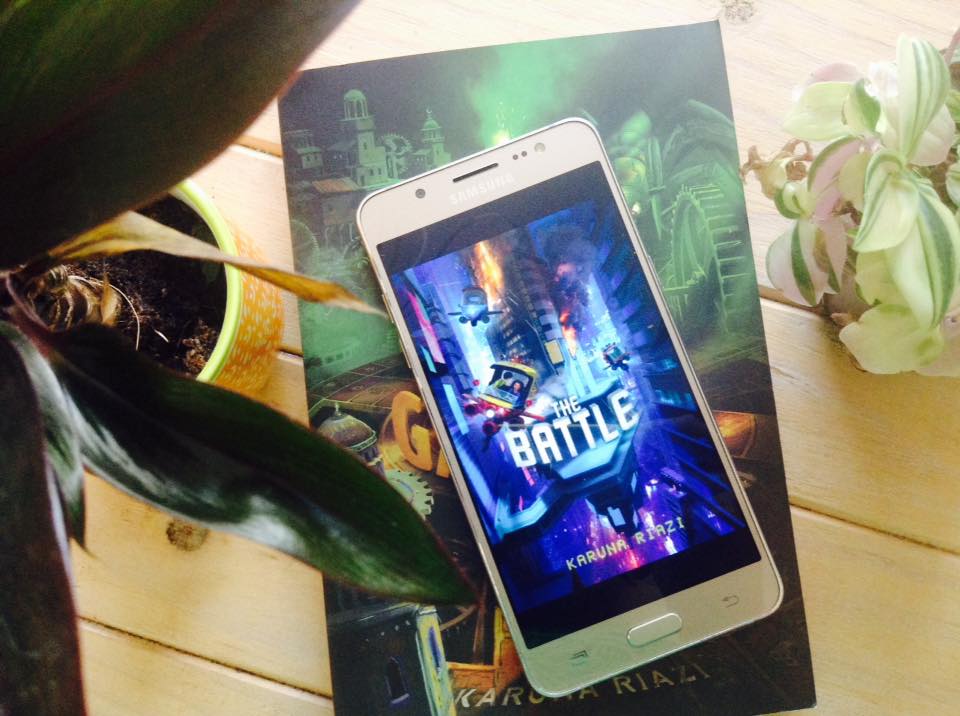 Thank you to Simon & Schuster for the review copy in exchange for an honest review. This does not change my opinion in anyway.

Four years after the events of The Gauntlet, the evil game Architect is back with a new partner-in-crime—The MasterMind—and the pair aim to get revenge on the Mirza clan. Together, they’ve rebuilt Paheli into a slick, mind-bending world with floating skyscrapers, flying rickshaws run by robots, and a digital funicular rail that doesn’t always take you exactly where you want to go.
.
Twelve-year-old Ahmad Mirza struggles to make friends at his new middle school, but when he’s paired with his classmate Winnie for a project, he is determined to impress her and make his very first friend. At home while they’re hard at work, a gift from big sister Farah—who is away at her first year in college—arrives. It’s a high-tech game called The Battle of Blood and Iron, a cross between a video game and board game, complete with virtual reality goggles. He thinks his sister has solved his friend problem—all kids love games. He convinces Winnie to play, but as soon as they unbox the game, time freezes all over New York City..

With time standing still and people frozen, all of humankind is at stake as Ahmad and Winnie face off with the MasterMind and the Architect, hoping to beat them at their own game before the evil plotters expand Paheli and take over the entire world.

The Battle is the sequel to The Gauntlet, and almost like a companion novel. Unfortunately it could not quite live up to the first book. The compelling things from the first book seemed to have fallen away.

The Battle focuses on Ahmad, the younger brother of Farah who she had to find back in the first book. The game was destroyed but managed to rebuild itself and took a more modern route, appearing to Ahmad as a console game. Inside the game everything was also videogame like.

Taking the setting from the middle eastern setting to a generic video game made it lose quite a lot for me. The clear descriptions the first book had felt like they were nowhere to be found in here.  It was generic. I had little idea what anything looked like. Adding on to that, the game lost its clear rules and there was just chaos with the challenges. I had no idea what exactly we were heading for in most challenges. It didn’t make it a fun read.

I was excited we got Ahmad as a main character now. From the first book we learned that he had ADHD and I was excited we were going to get that rep in here more front and center. Except I don’t think we did. I think it was mentioned way at the start of this book but the rest of the book just seemed to ignore it. Or that is how I felt in any case.

A theme of the book is friendship which is great. However I don’t understand this friendship. She never gave him attention, never stuck up to him, never smiled at him, nothing. Then this game appeals to her (as the game does) and whoop there she is. They trust each other and that is the end. Again, nothing is actually talked about. Also her personality gave me a whiplash, it was all over the place.

Also there was scene where the police was trying to catch the children and shooting flame bombs at them or something. This bothered me because it certainly didn’t need the violence and it has the potential to be quite triggering for this age group.

Overall I unfortunately didn’t quite enjoy this sequel like I did the first book.