If by any chance you do not have me on any social media you might not have seen me flail in general in the whole of August so far. An exhausted flail but flail nontheless. So at the middle of July I caught an announcement on Jonathan Stroud’s facebook page. He was coming to Castlefest. In the Netherlands. In August. I think I might have shrieked a little. I was also tagged by everyone. You all know me so well.

In case you don’t, Jonathan Stroud is my favorite author. My love started in 2008 with The Golem’s Eye and then never went way. So of course I had to go. Cue frantical search for babysitter for Merijn and a Castlefest companion.

In any case, I thought I’d share with you how my day was. The pictures that were taken that have me in them were taken by my friend Daphne. Thank you so much again for going with me. Beware there are a lot of photos, especially at the start, in this post

Castlefest is a fantasy festival in the Netherlands which is held in Lisse at the Keukenhof (which is mostly known for its tulips in the Spring internationally) every August. It has a variety of things for fantasy lovers to embrace. Young or old, there is no age restriction there. Little judgement. You can come dressed as any character or just come as yourself. There is a variety of music, from Pagan Folk to Indie. You can follow workshops, try archery. Browse many of the stands that sell games, cosplay items, books, food. You name it, it is there.

Every year there is a Wicker burning. It is a figure (this year shaped as a wolf) where people put in notes and items to burn along with it. It is a powerful way to find closure, balance or energy.

Of course my first stop was the stand where Jonathan Stroud was going to be. We had to search a little and found a big white tent that had various Dutch publishers (and sometimes their authors) with stands including Dutch Venture Publishing, Dark Horse Comics and Zilverspoor. But many more as well. So many fantasy books in one place. It was great to see. 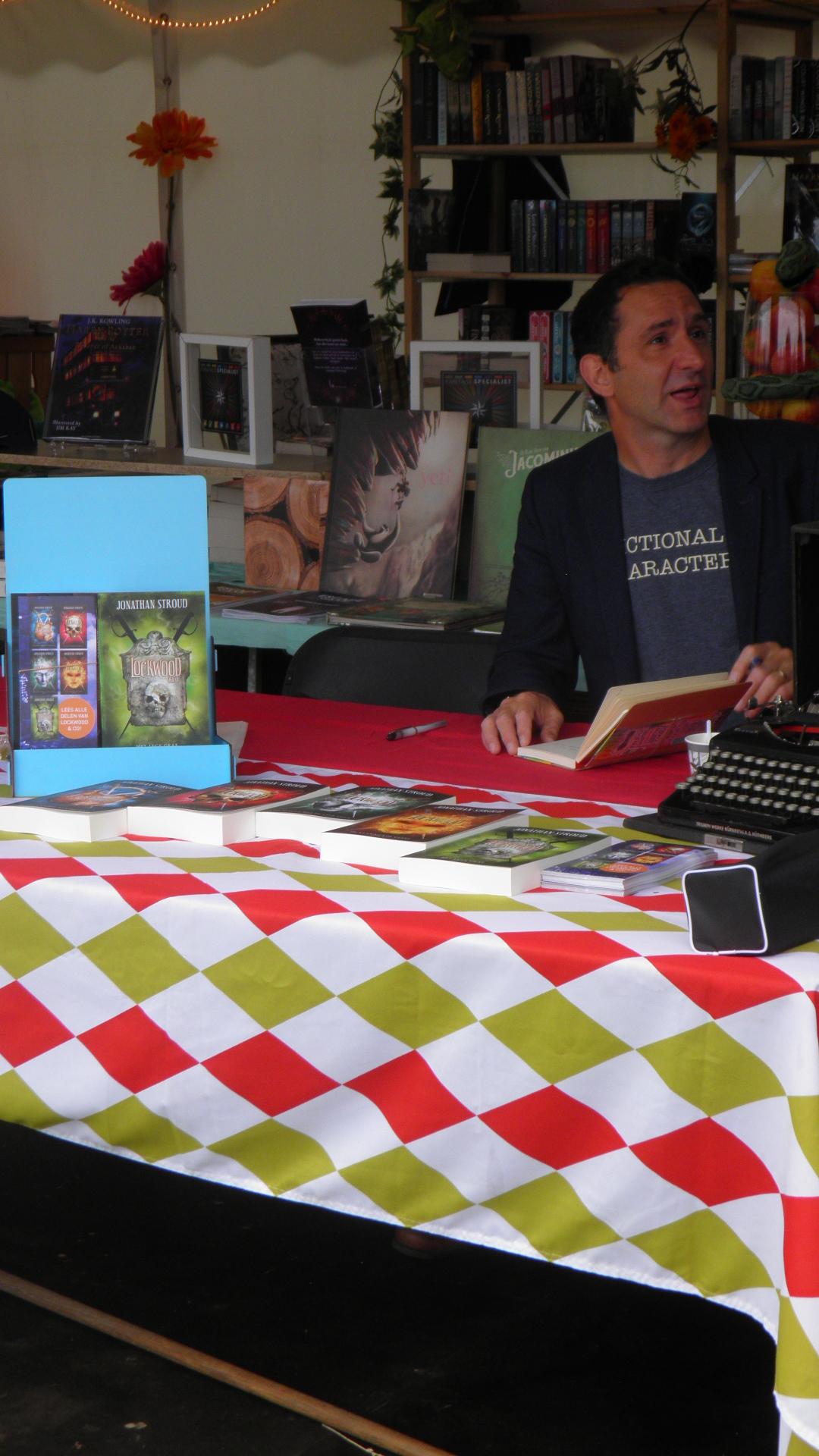 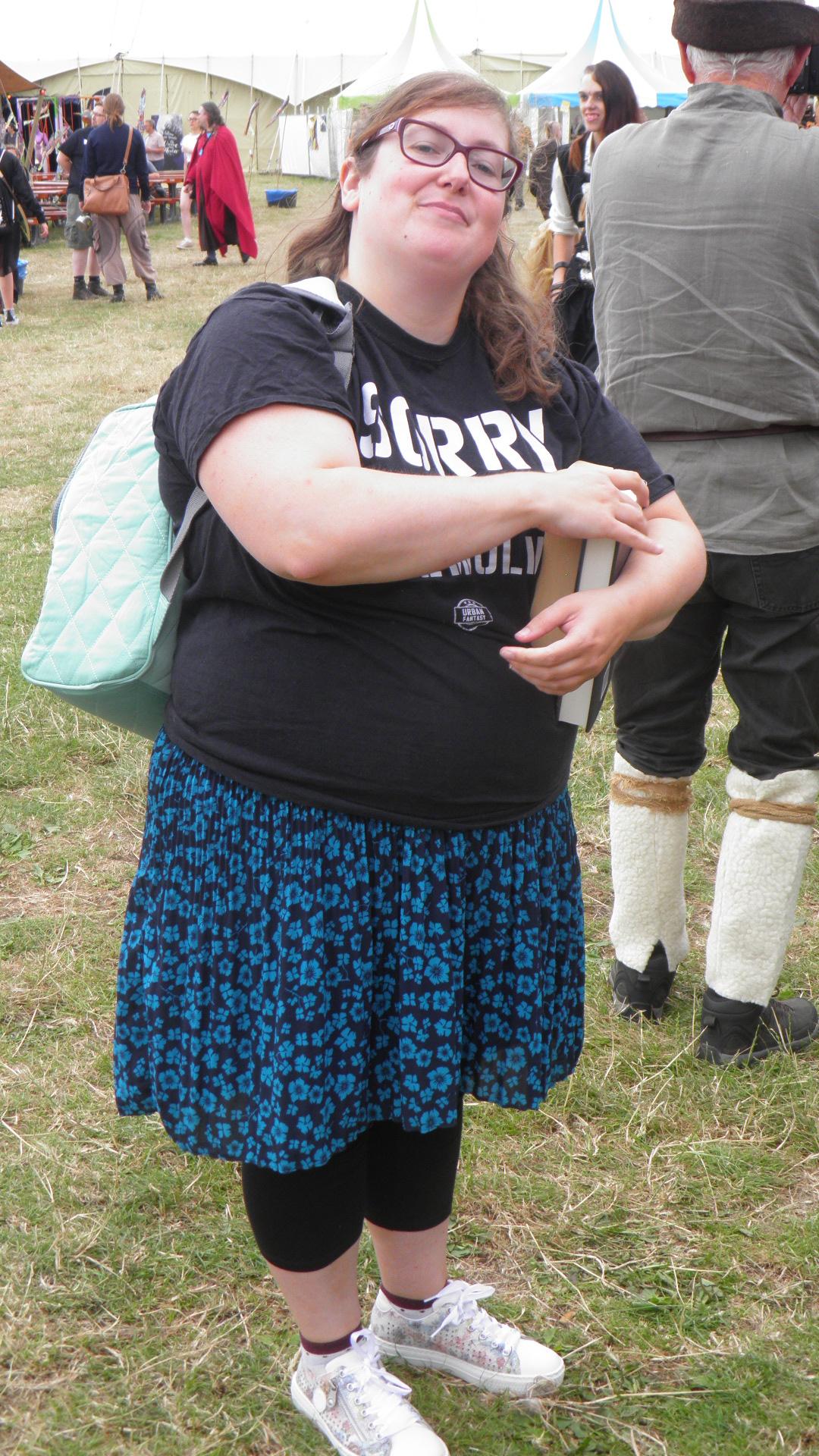 Jonathan at the stand and me being weird haha.

We finally found the stand on the outside, a little way down from the tent. He wasn’t there yet. Noooo. So then of course I bought The Dragon Republic. The stand was from a book store where the dutch publisher L.S. Amsterdam was seating themselves with their authors. 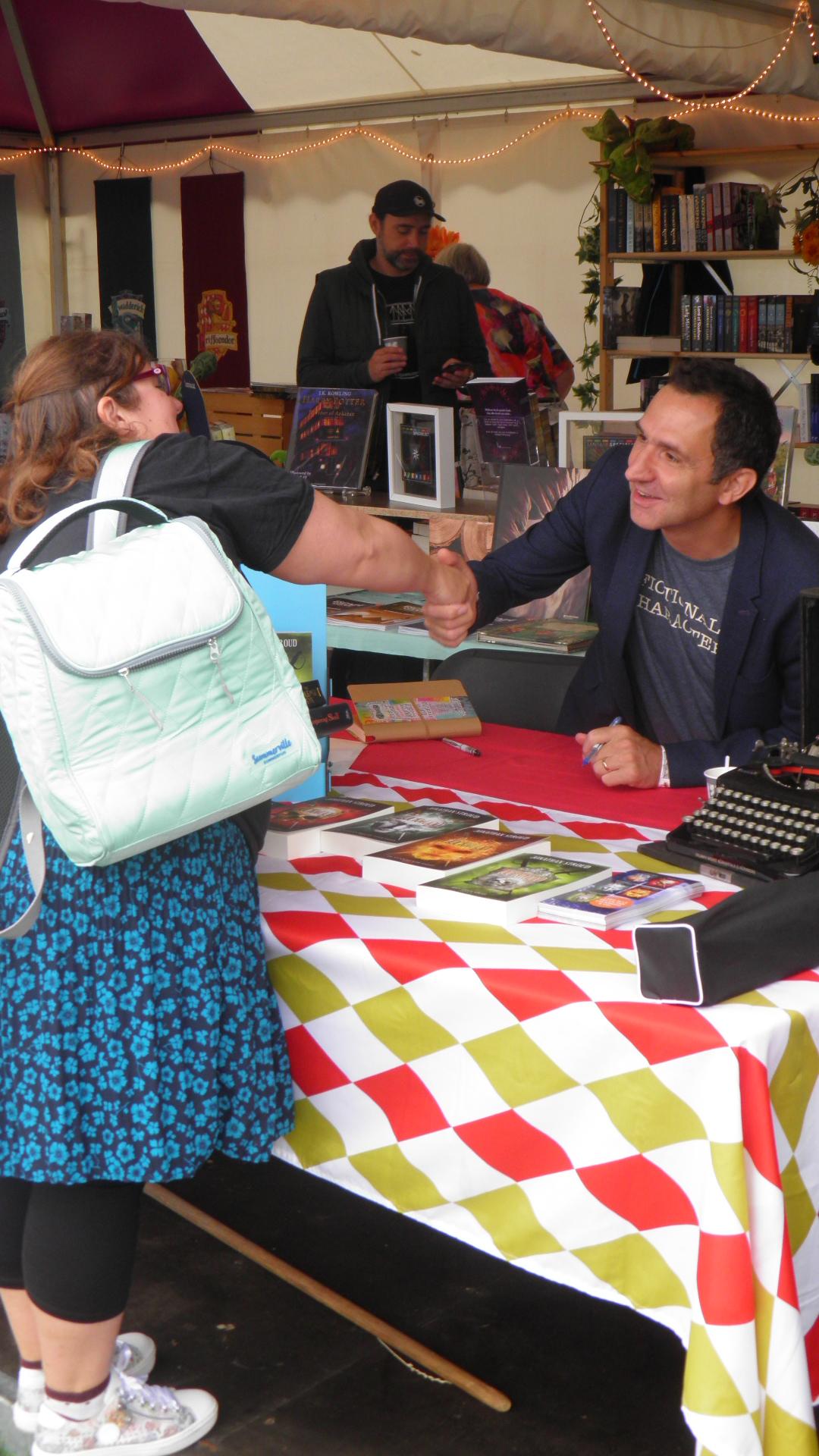 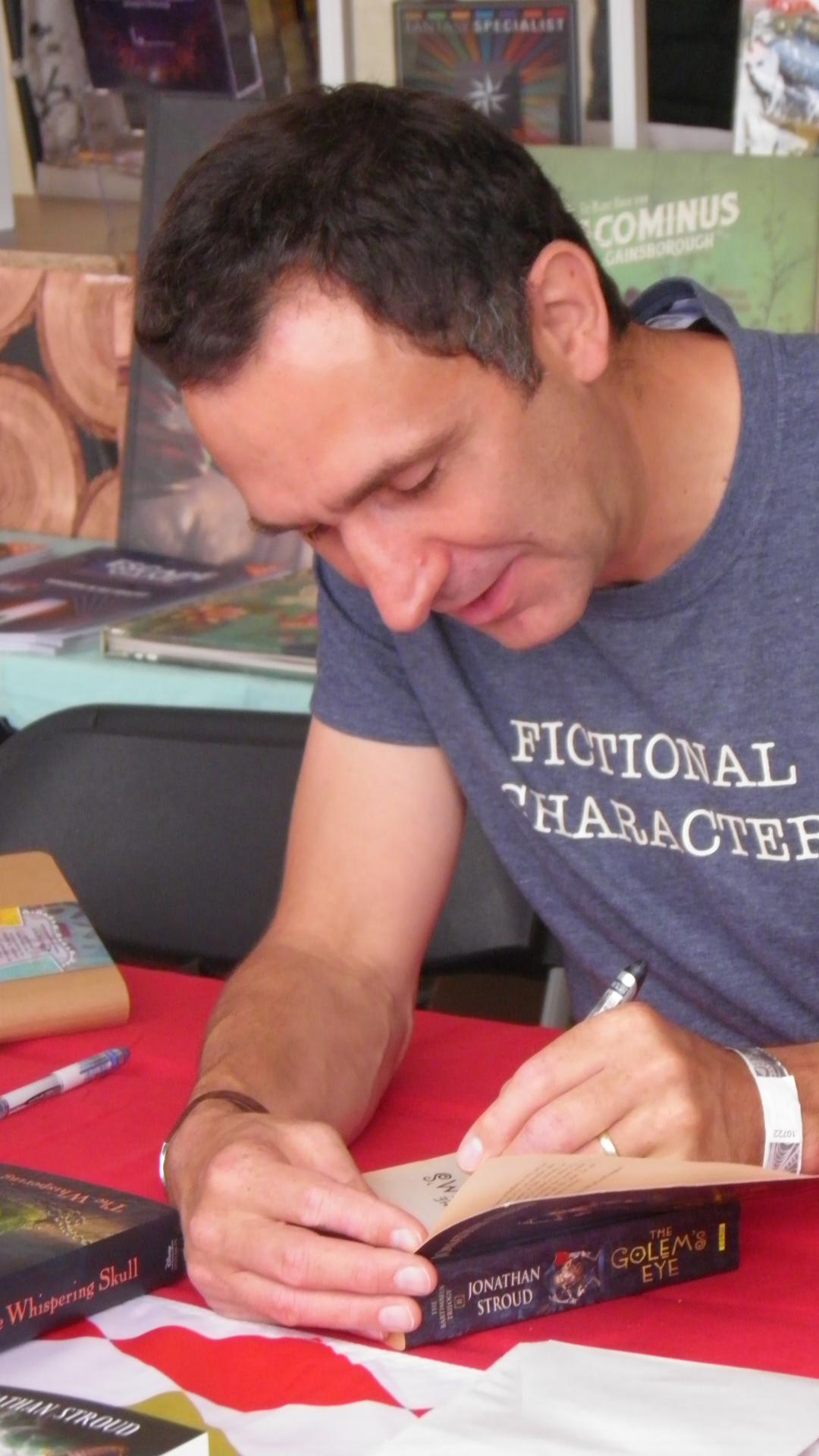 I think around 10.45 Jonathan Stroud was at the stand and of course I was right there and nicely awkward as I shoved my books to sign at him. He took it in stride. My friend told me I was totally fangirling. Can you blame me? 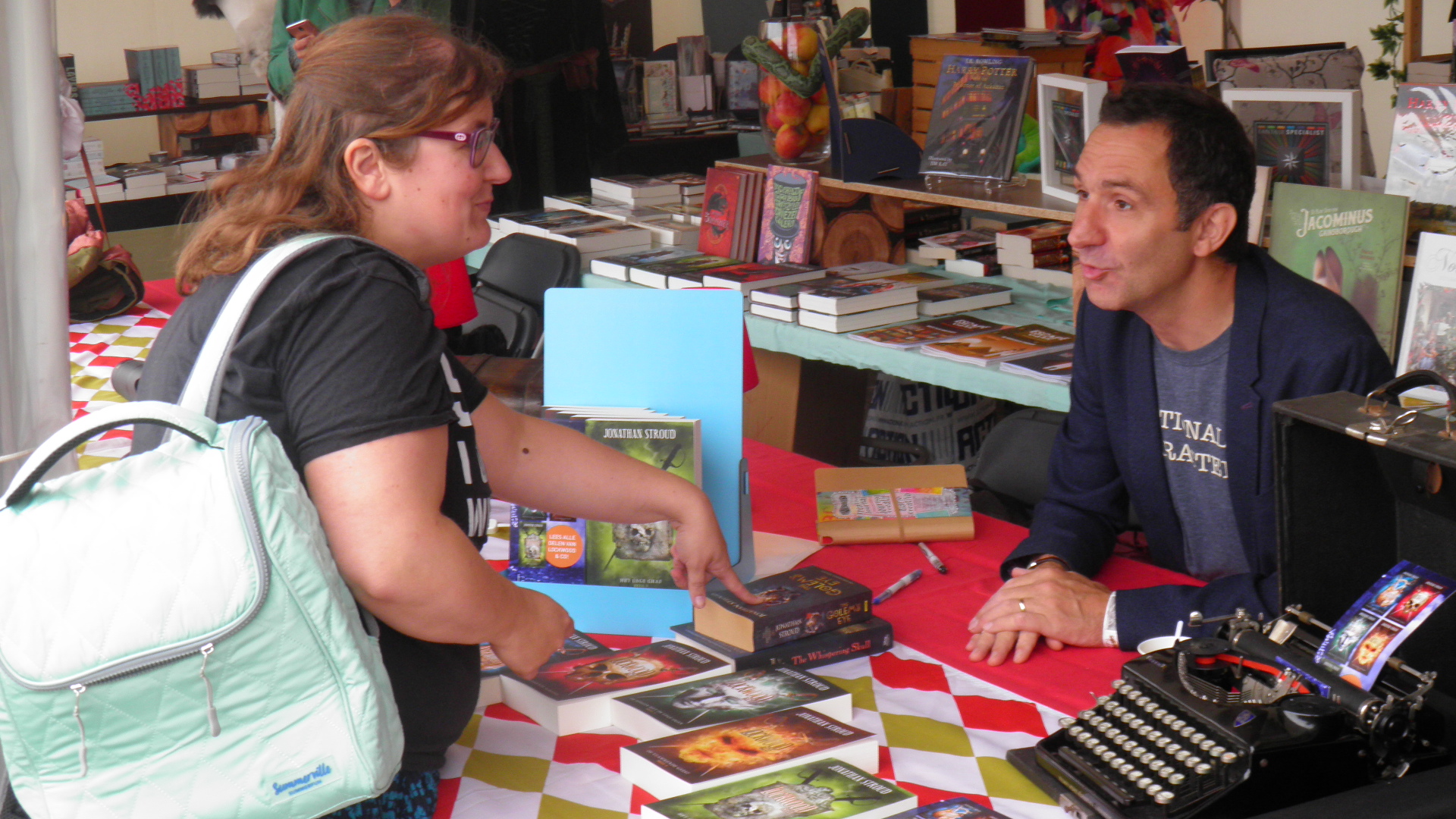 Anyway we talked about me being a long time fan and having done the bartimaeus readalong last year. He was really nice and seemed to remember me from Twitter (or he was just being nice haha). 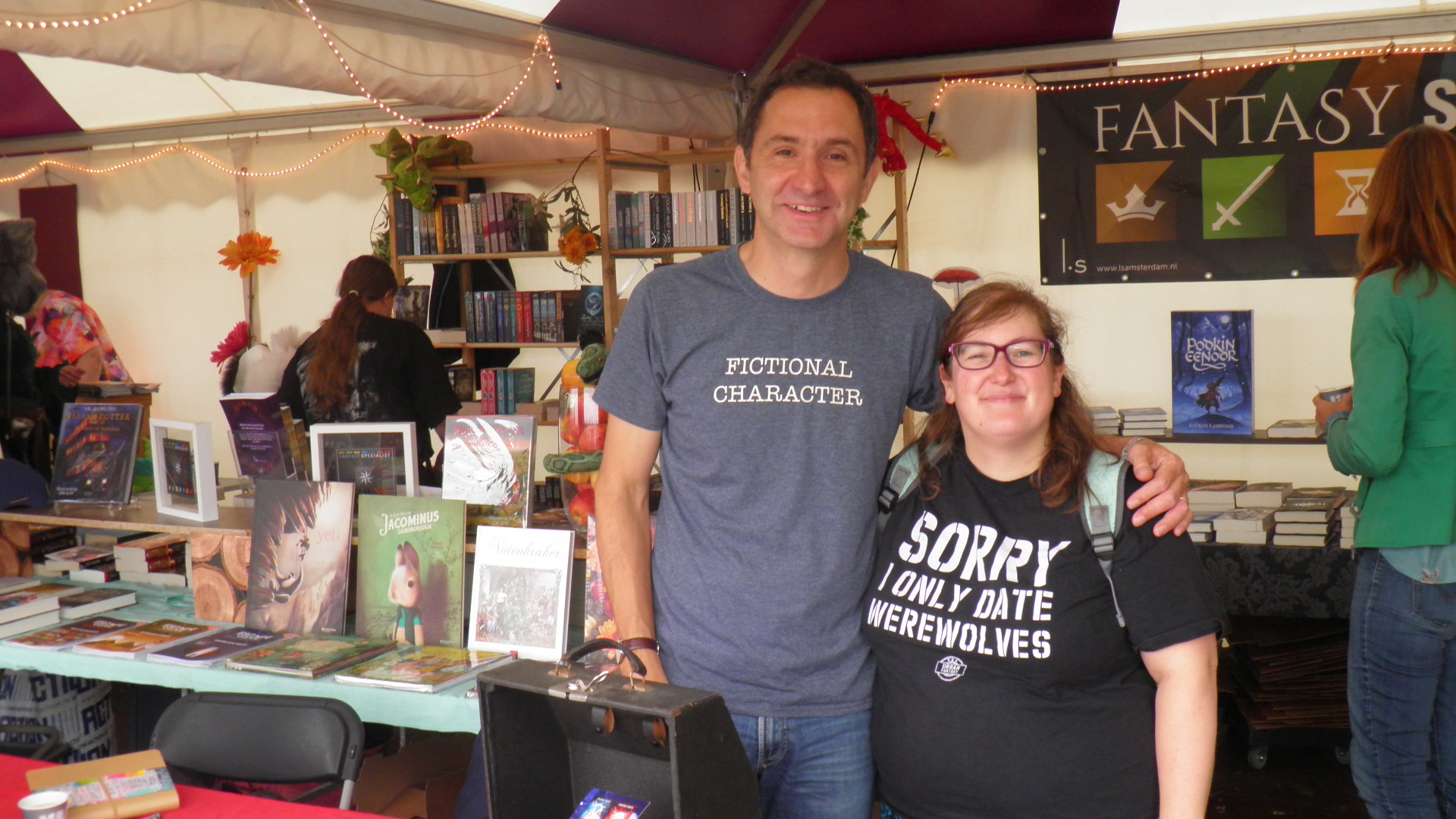 After that I jumped on over next to him where Adrian Stone was. Adrian Stone is his writer’s name, not his real name. He is a Dutch author of who I own a few books but so far have only read one. That book I took with me. 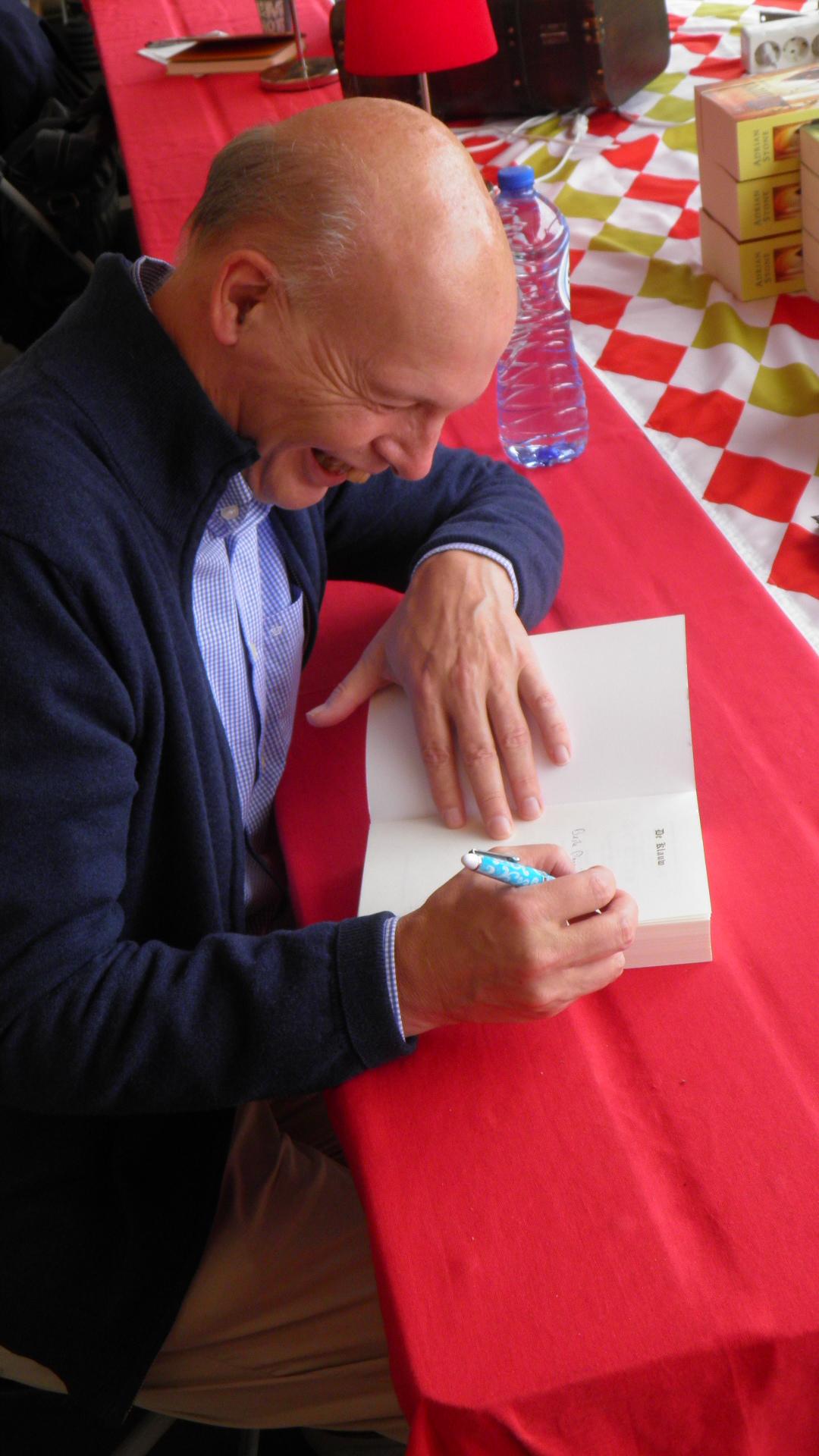 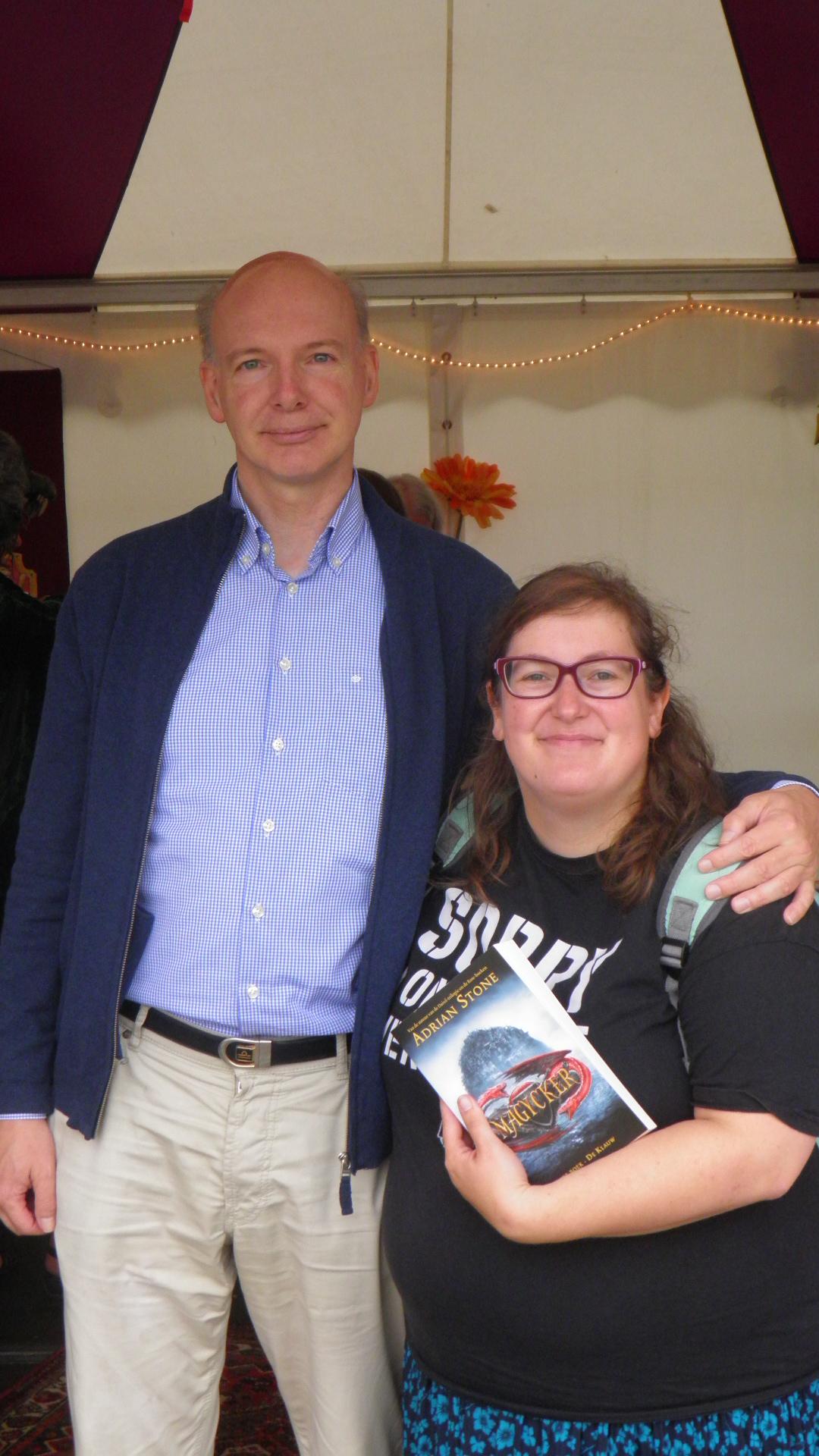 Signing my book and a picture together. 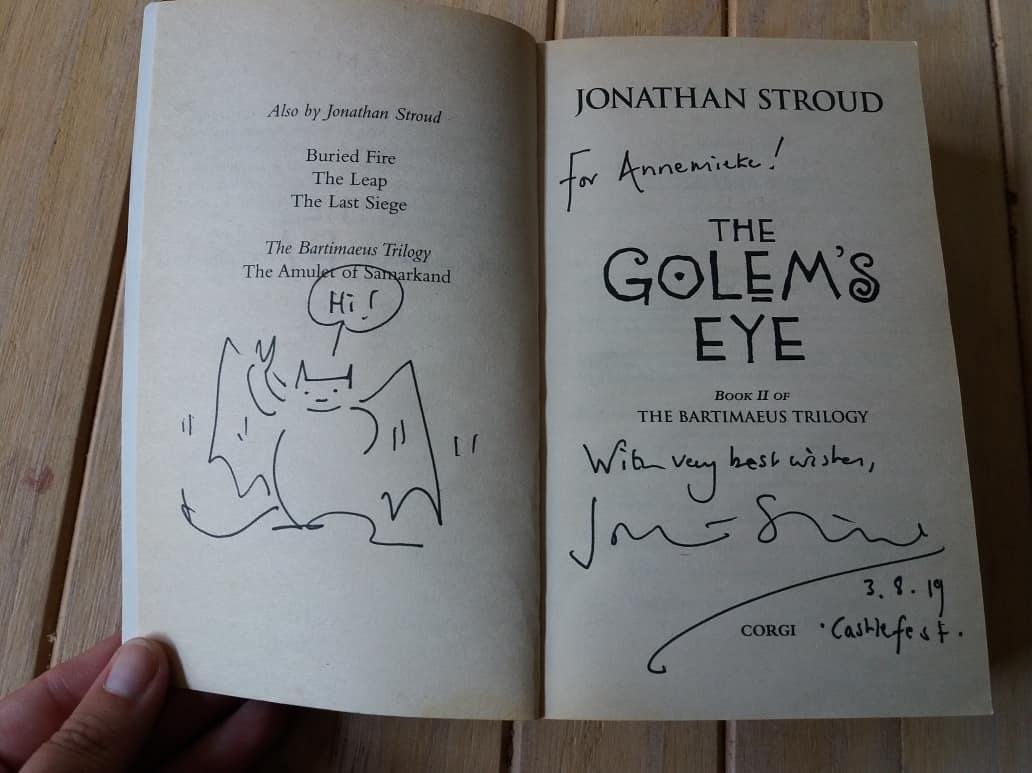 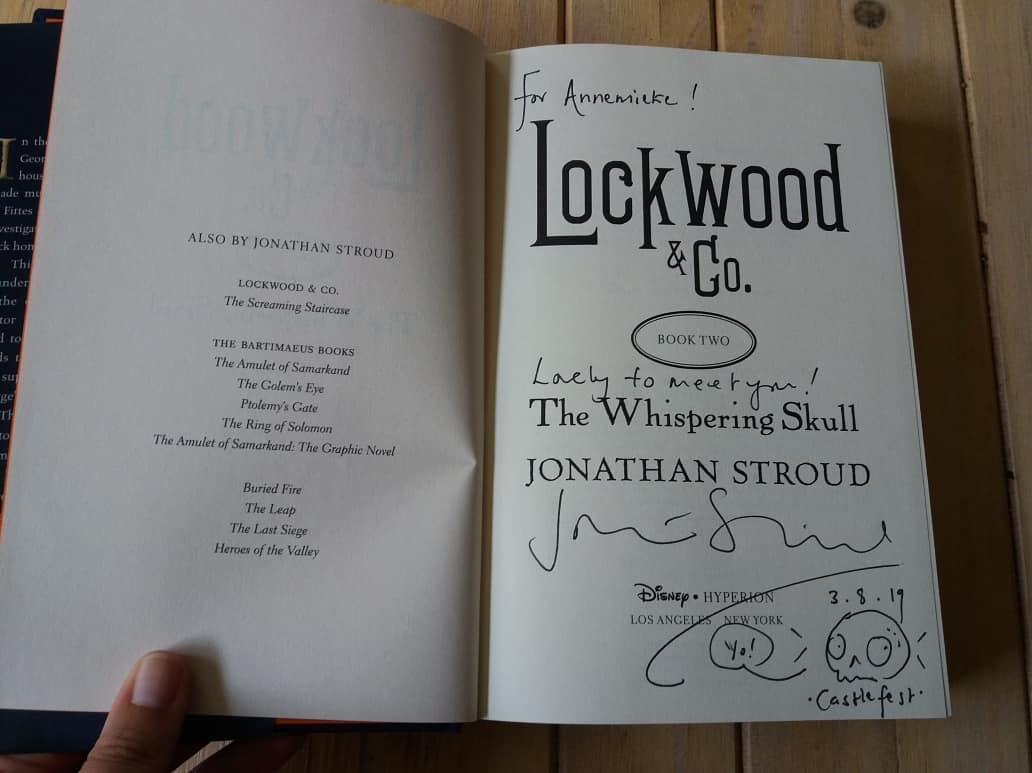 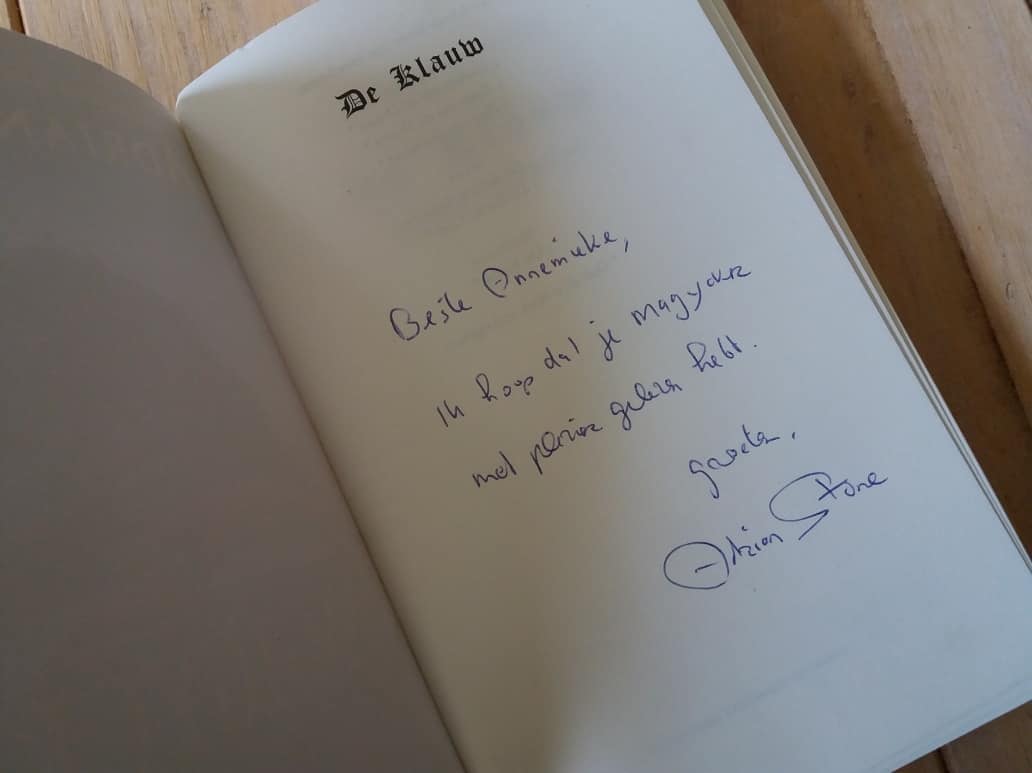 An Interview with Jonathan Stroud

Afterwards Jonathan was to have an interview at 11.30 in the big white tent. Unfortunately the area where the interview was could not be closed off and so we got a lot of the rowdy noise from the people looking at the other stands in the white tent.

It has been a good week since I was there as I am writing this so I don’t remember everything from the interview but I’ll share a few things that I do remember. 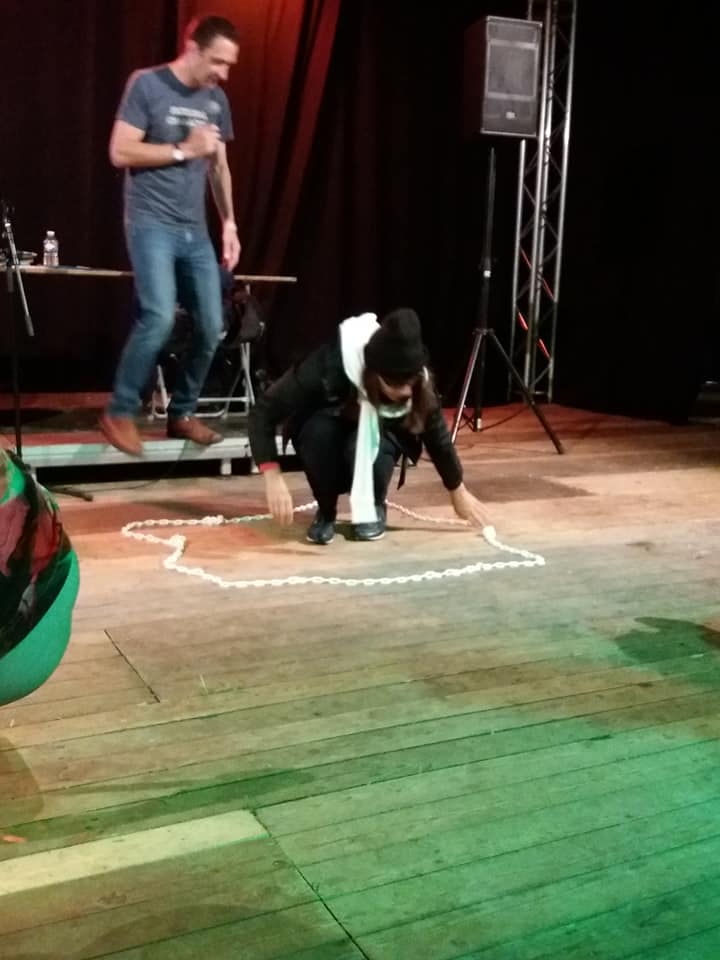 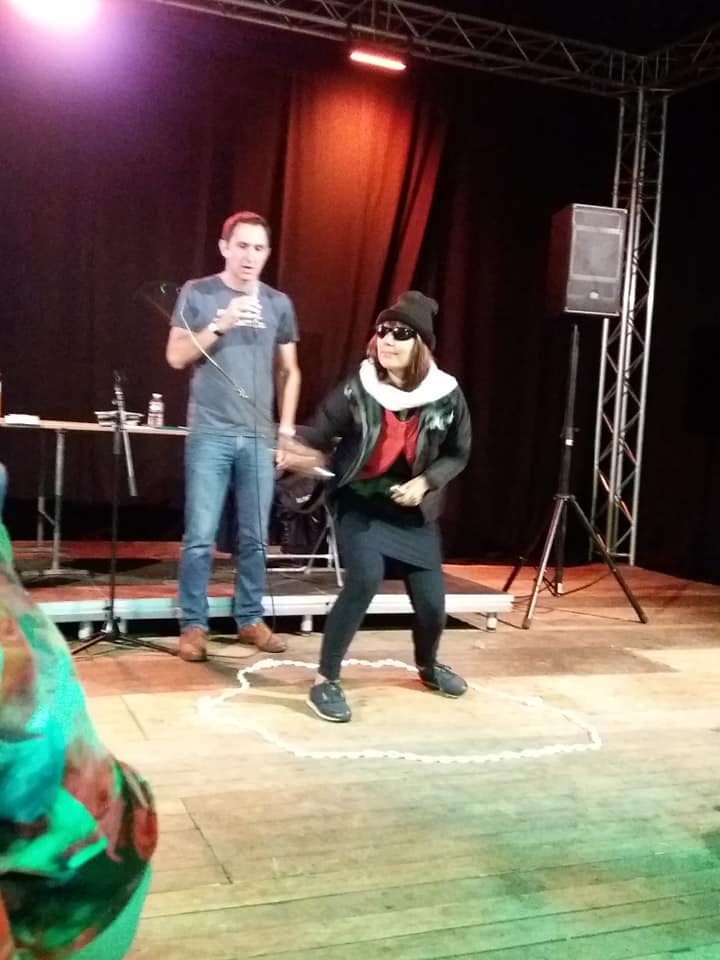 Using the chains and rapier

The first part of the interview had a lot to do with Lockwood & Co. He talked about that. He also had a bag filled with what the Lockwood gang needs to fight the ghosts. He had a volunteer from the audience to put on the belt and show all the items to us. I thought that was a creative way of sharing things about the book and in line with the target group his book is for. The younger end of Young Adult.

He also shared that the first book he wrote was when he was seven and it is a book that he still owns. He glued the pages together with his father. The book he had with us. He showed it to us and read a little piece of it. Great to see his first start. 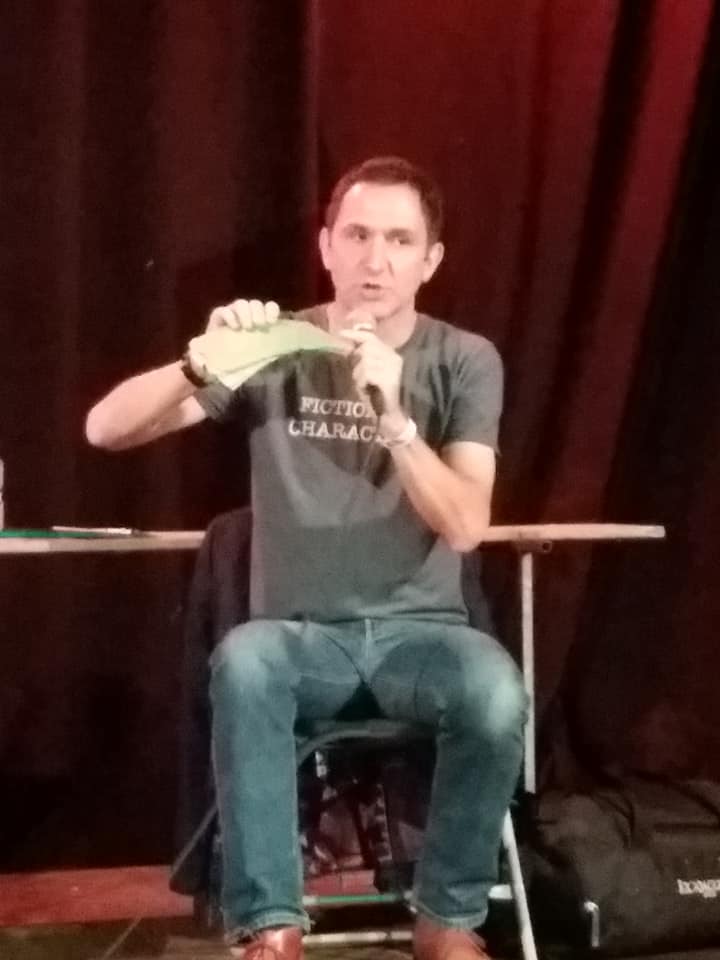 Talking about and holding his first book

He also mentioned that Buffy the Vampire Slayer was an inspiration to him when writing.

There were also some questions like if there were going to be more Lockwood books. Right now that is closed. However the right for the books has been sold and there is some behind the scenes work going on. Nevertheless he said, he doesn’t have his hopes up too high because Bartimaeus trilogy rights were sold too and there is still no tv show there. It is still a possibility though. 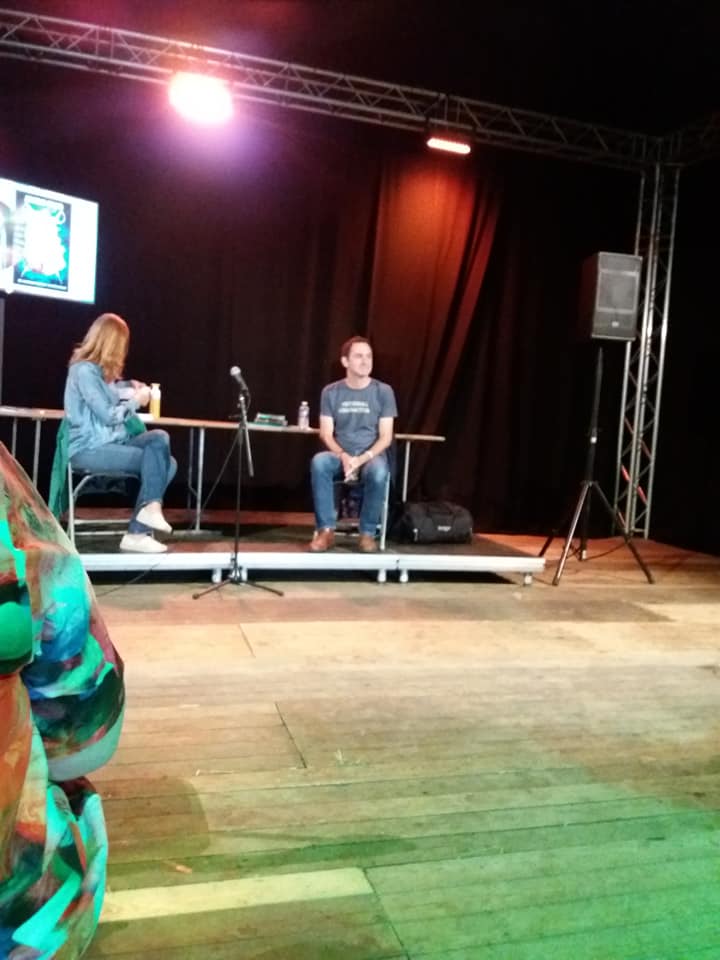 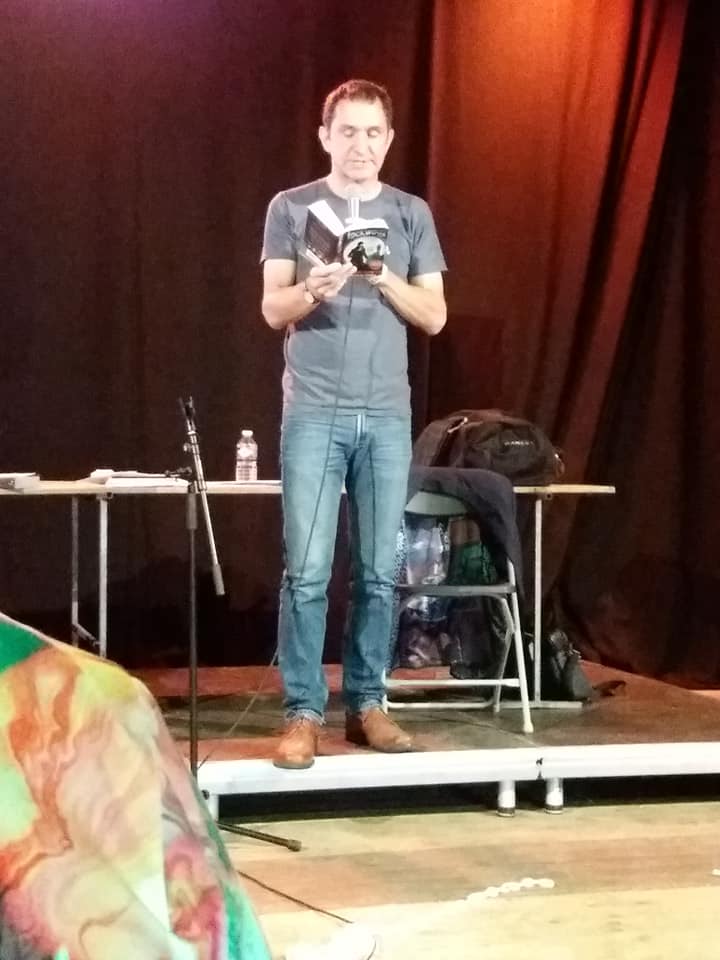 He shared that he likes to use character conversations to discover the characters personalities. That as he is writing he is getting to know the characters just the way that we are. All the little facts he keeps in a seperate document so that he doesn’t forget an allergy or something of the sorts.

Lastly he was also asked about his new book. Recently it was released that his newest book series will be The Outlaws Scarlett and Browne. We have to wait until Spring 2021 though for that. He said that in a way this book is his own more moderate response to Brexit. Which I find rather interesting to hear.

After having left the white tent we walked past different stands to go to a different area of Castlefest and we came across one that offered archery. You had to pay a coin for it. I had never done it before so my friend was like, and now you are going to do it. 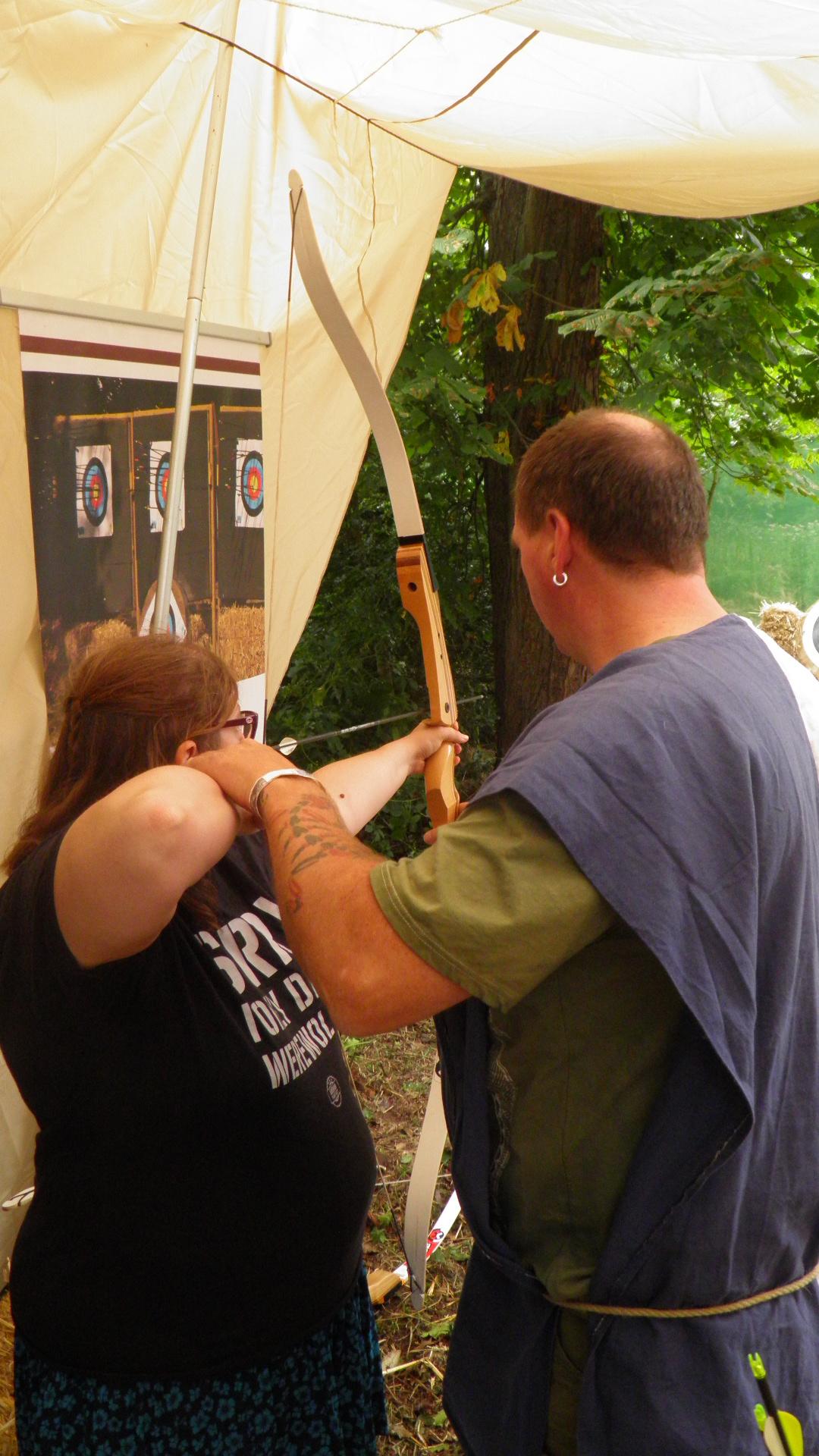 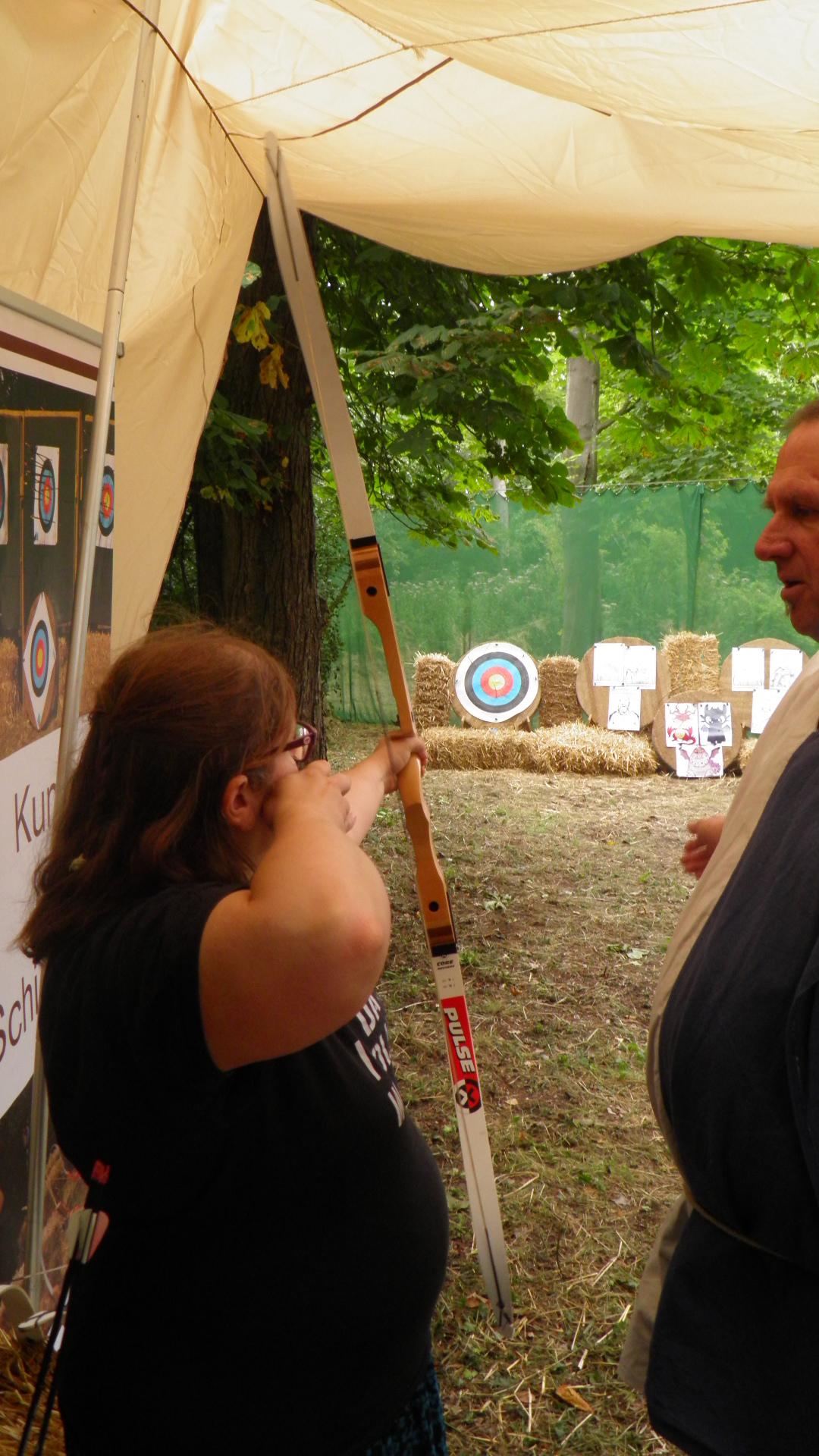 Learning how to hold

I actually really enjoyed doing it though it is a lot to remember at once. I’d like to do it again some time. 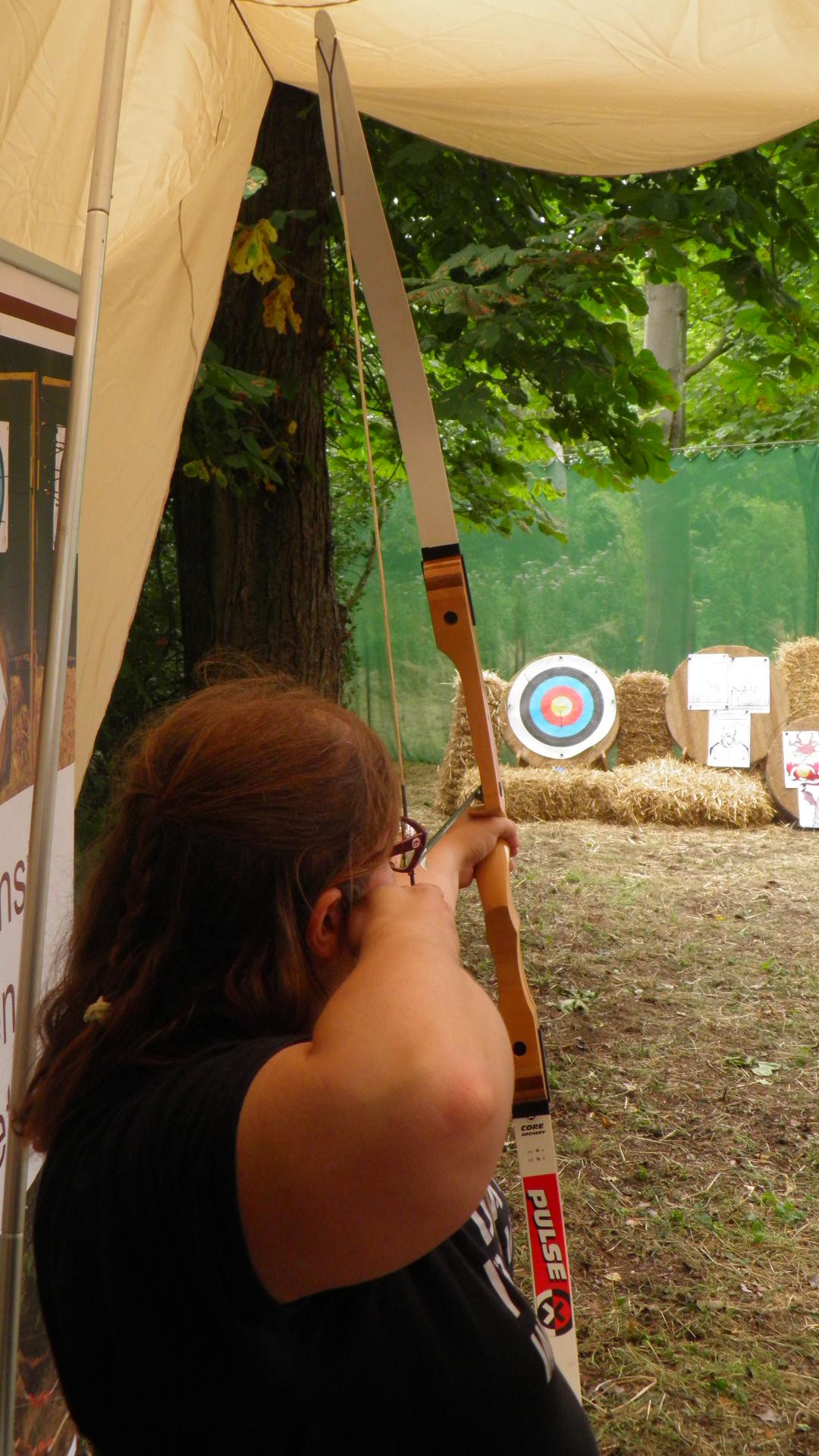 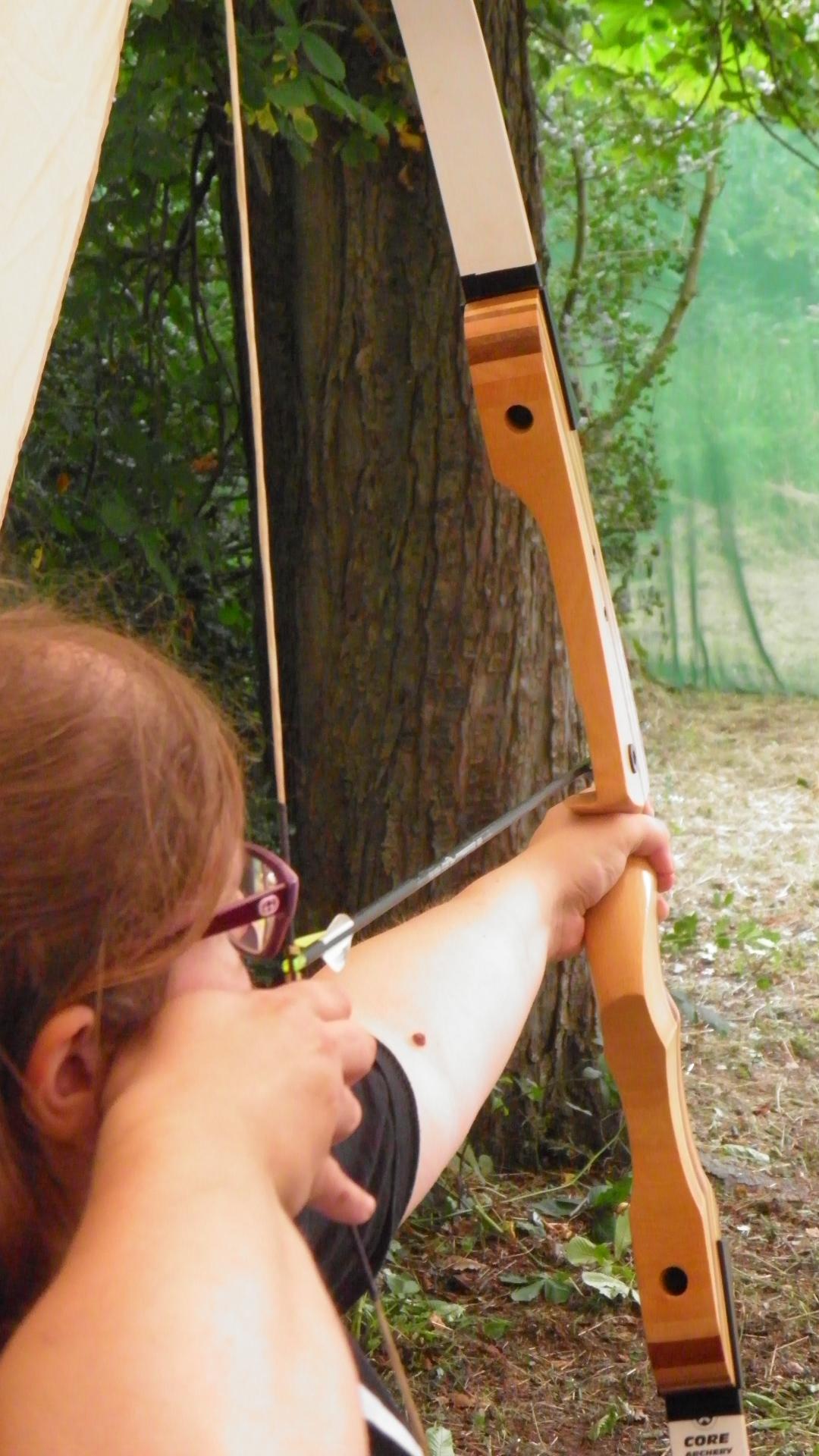 I always had the idea that Castlefest was so super busy and much too overstimulating for me. But it went fine. The Saturday I went the day was already sold out so it was full. But the whole terrain was big and there were so many places to go to that I never felt I was stuck in a large crowd except for once (when we went past some stands in a slighly more narrow way).

There were a few podiums placed throughout with grass fields in front of it where you could stand or even sit. There were places and tables where you could sit and you could always go and sit with someone if they had room at their table and all that. 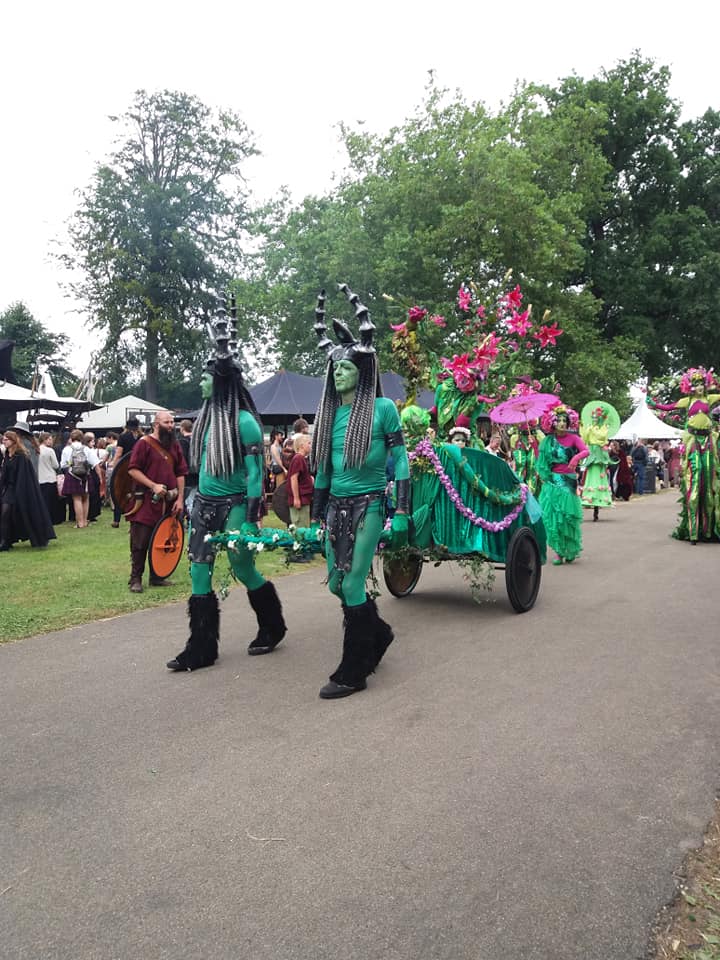 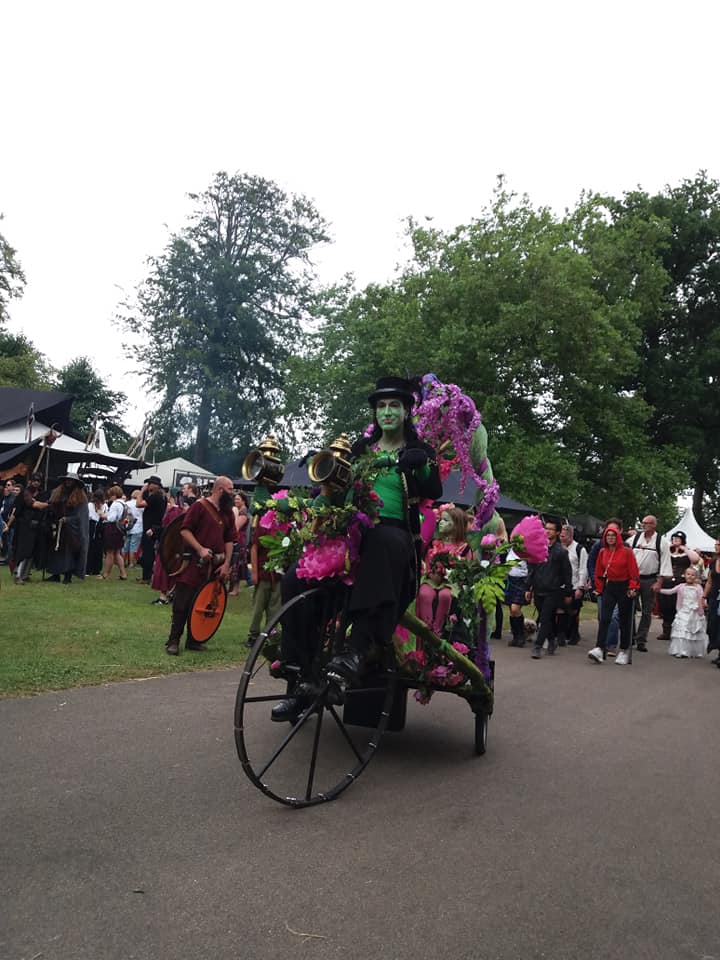 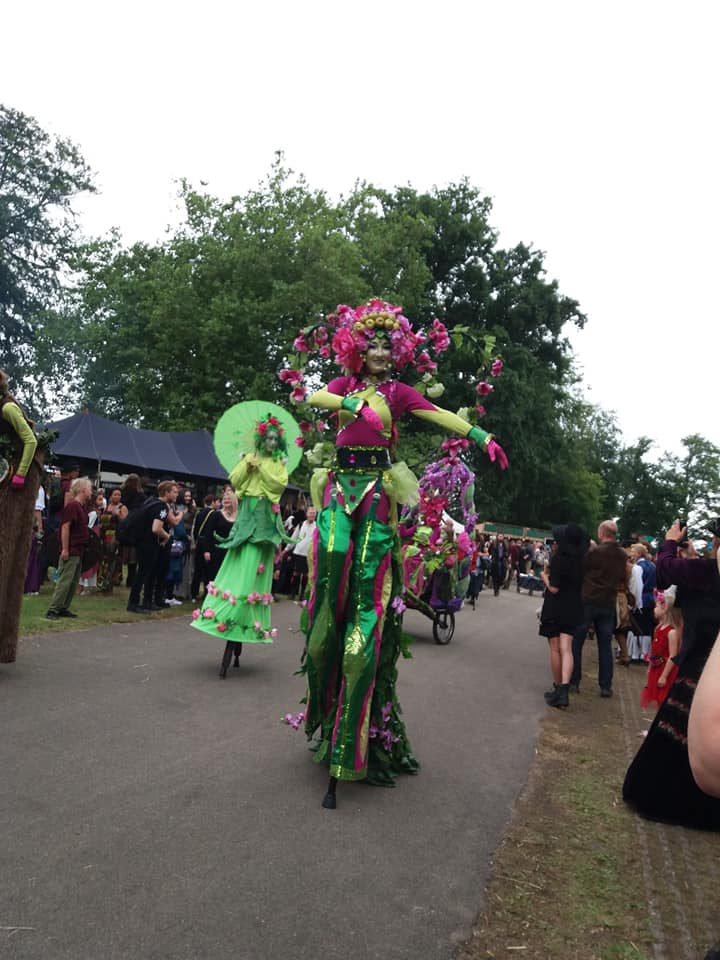 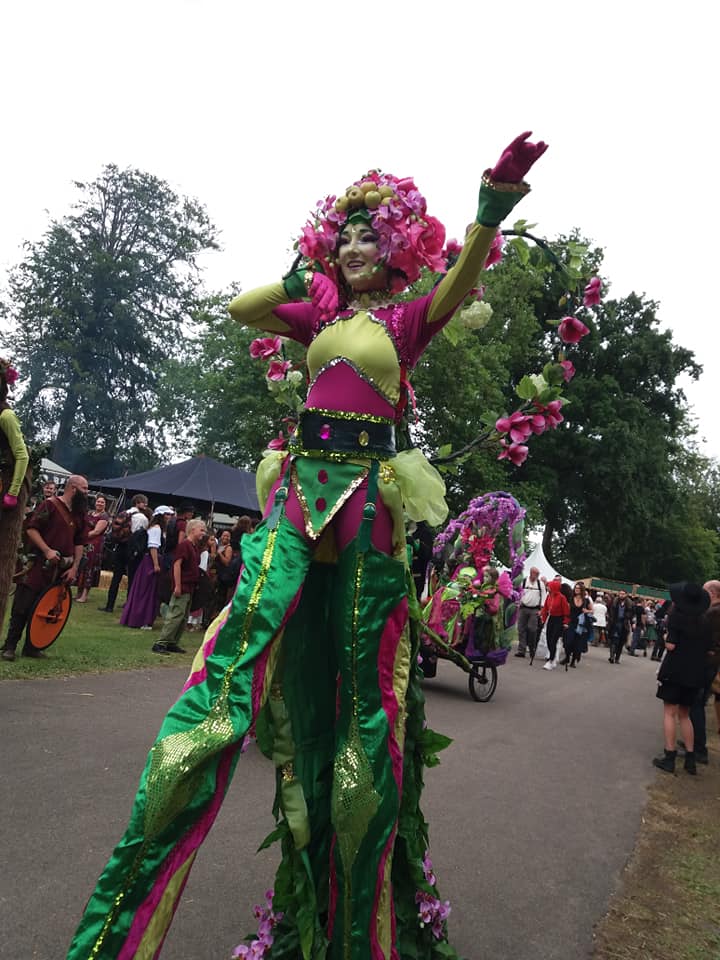 It was also great to see the creativity some people had with their costumes. We even saw a group of 4 who made their costumes from Ikea Bags. It was…an interesting sight. There was a lot to do. You could get a massage, body spray paint, henna tattoos. It is certainly an experience I can recommend to everyone who is curious.

Will I go next year? I don’t know. While I enjoyed it a lot I don’t know if I really need to go there every year. Maybe every few years would be more than fine for me. 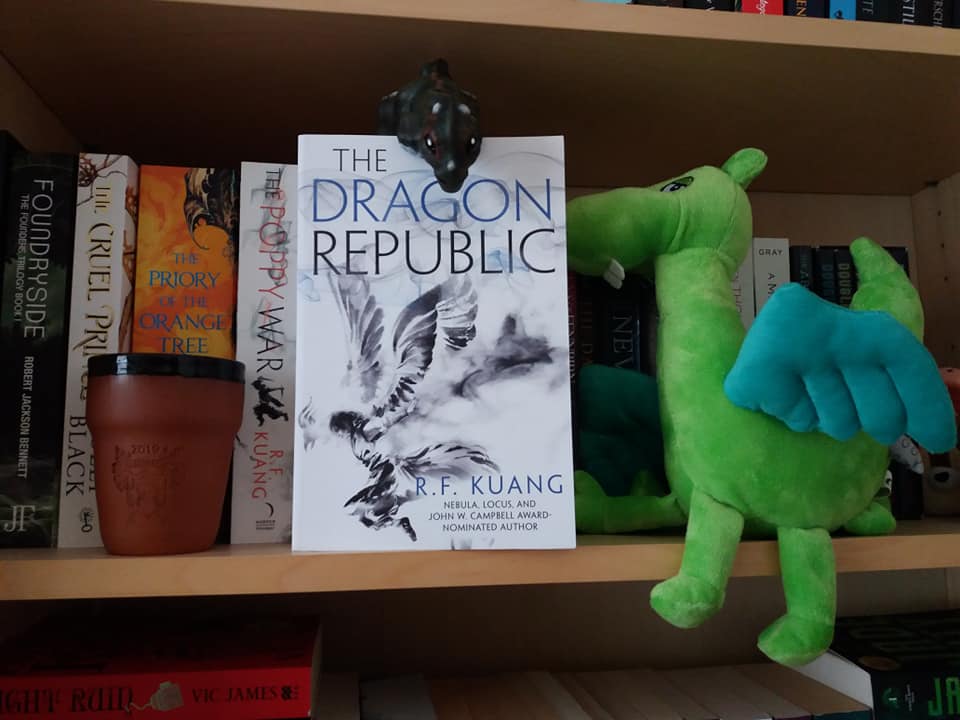 So of course I didn’t leave with just signed books. as I was waiting on Jonathan Stroud to come I bought The Dragon Republic and that cute dragon plushie at the stand. I could not resist the dragon okay. And I wasn’t planning on buying The Dragon Republic yet but when I saw it I couldn’t leave it. #oops 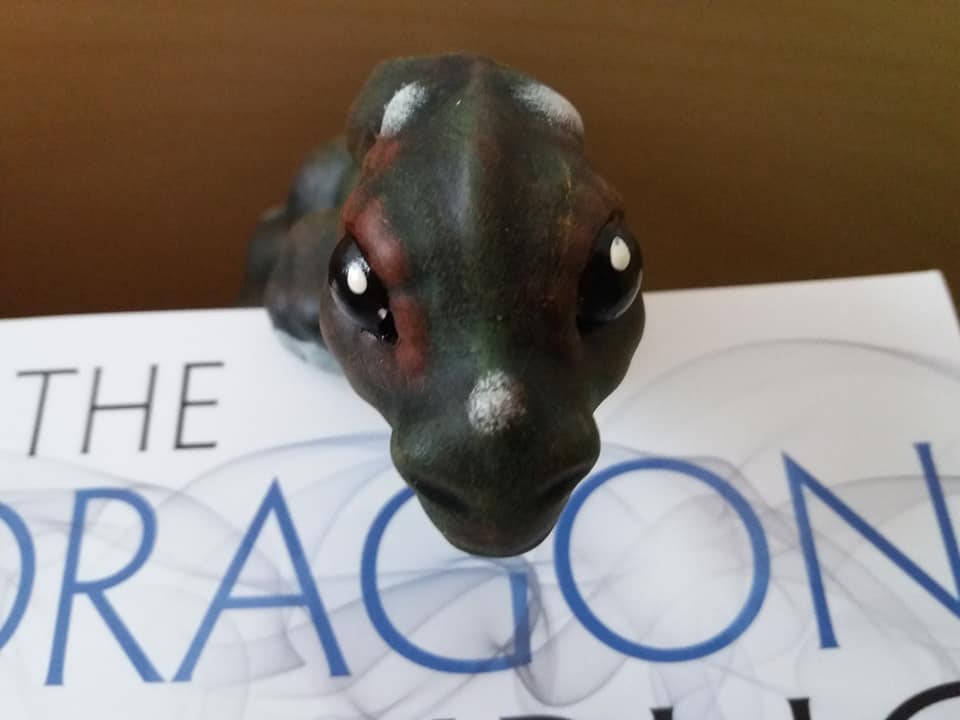 Then I found the cutest little dragon at a stand that sold various dragon statues. It is perfect for my collection of dragons. And yes at some point I will show you my entire collection. Just looking to see what the best way is to photograph them. 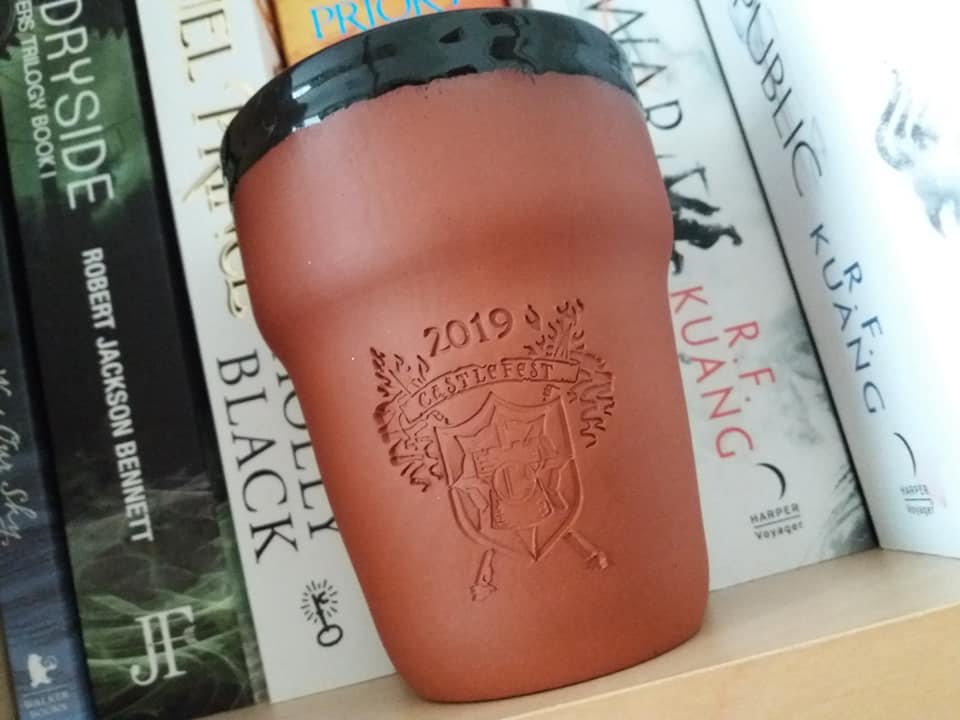 When you got a drink you could get it in one of these. You could return it for coins back or keep it. Of course I decided to keep it. I like it. It is pretty.