Now if you know me you know I don’t usually do cover reveals. However for Intisar Khanani I’ll make an exception. Thorn has been one of my most anticipated releases for a while. It is actually a rerelease as it was acquired by HarperTeen after Intisar released it herself. The book was then pulled in preperation. Intisar worked super hard on rewriting the story and seeing what the best cover would be. I am so excited that 2020 will be the year this is going to be rereleased!

A princess with two futures. A destiny all her own.
.
Between her cruel family and the contempt she faces at court, Princess Alyrra has always longed to escape the confines of her royal life. But when she’s betrothed to the powerful prince Kestrin, Alyrra embarks on a journey to his land with little hope for a better future.
.
When a mysterious and terrifying sorceress robs Alyrra of both her identity and her role as princess, Alyrra seizes the opportunity to start a new life for herself as a goose girl.
.
But Alyrra soon finds that Kestrin is not what she expected. The more Alyrra learns of this new kingdom, the pain and suffering its people endure, as well as the danger facing Kestrin from the sorceress herself, the more she knows she can’t remain the goose girl forever.
.
With the fate of the kingdom at stake, Alyrra is caught between two worlds and ultimately must decide who she is, and what she stands for.

Isn’t this great? And I can tell you that in real life it is great too! This great cover design was done by Jenny Zemanek. You can find out more about them on their website.

Intisar Khanani grew up a nomad and world traveler. She has lived in five different states as well as in Jeddah on the coast of the Red Sea. Until recently, Intisar wrote grants and developed projects to address community health with the Cincinnati Health Department, which was as close as she could get to saving the world. Now she focuses her time on her two passions: raising her family and writing fantasy. She is the author of The Sunbolt Chronicles and Thorn (HarperTeen 2020). 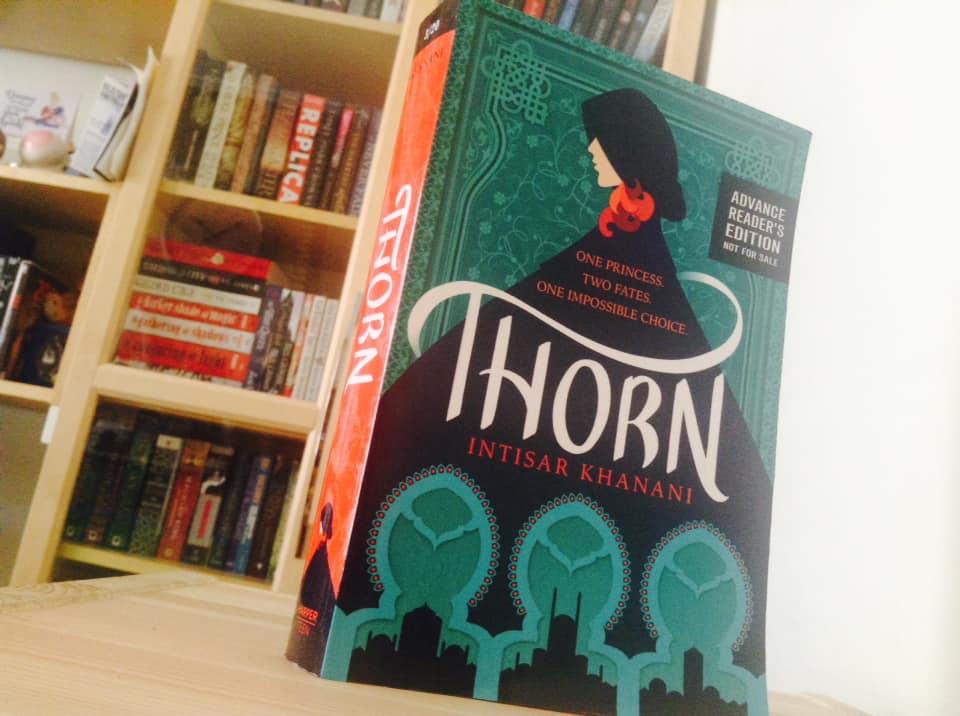 I lead the king down to the back entrance to the gardens, and we walk along between plots of dill, thyme, and chives. I wait, knowing he will speak when he is ready.

“How much does your mother confide in you?” he asks as we near the middle of the gardens.

I slide a look at him from the corner of my eye. “Enough. My lord.”

His lips quirk, the first true smile I have seen from him. “Is that honest?”

I pause beside a bed of borage. “How much do I need to know, my lord? You are here seeking a wife for your son.”

“I am,” he agrees. “How often do you participate in the discussions between your mother and the council?”

“I don’t, my lord. You should know I am not . . .” I hesitate, aware that I have no place telling this king what he should or should not know. Or jeopardizing such an alliance for my land.

I struggle to find an appropriate way to finish. “Not—it is not thought my place to attend such meetings.”

“You would never inherit the throne?”

I could inherit, it is true, but I doubt the council would allow it given my history—and certainly not now that I might marry into another royal family, one that would be happy to add our lands to their own. Either way, should my brother die, the council would certainly pass over me in favor of our nearest cousin. “It is unlikely,” I say finally.

“I doubt that,” the king says. “It has been my experience that even young men die. What you mean to say is your council would not accept you should your brother die without issue and you were yet unwed. Why?”

If he knows all the answers, why is he asking? I look him in the eye and quip, “Perhaps I am too honest, my lord.”

He laughs. “And too straightforward. You will have to learn to play with your words more.” He reaches out, his fingertips brushing my arm where my brother held me. I flinch back reflexively, as if the bruises have already darkened—as if he could see them through my sleeve. He watches me, his eyes glinting in the sunlight. “Once you are Menaiya’s,” he says, “your brother will never hurt you again.”

As a celebration for this cover reveal Intisar is hosting a giveaway. And it looks great!

The US Prize will be a prizepack:

* A great snowy owl enamel pin (that yes does have to do with a character in the book I am told, wink)
* a gorgeous “quill” style calligraphy pen set
* a hand-painted watercolor feather on a page from Thorn
* a “fairy dust” candle
* $25 Gift Card

There will also be a prize for one Non-US winner. This will be a $25 Gift Card.

You can enter through the Rafflecopter link down below, for both US and international. The giveaway runs from now until July 18th!

Expect a review this Fall!

8 thoughts on “THORN Cover Reveal and Excerpt / US & International Giveaway”