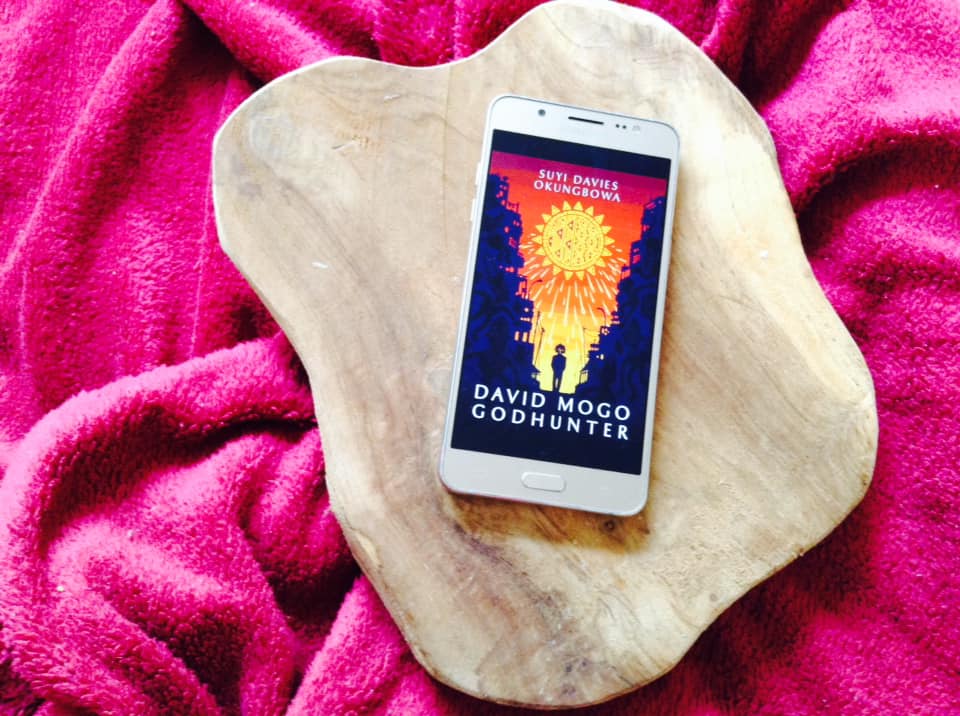 Thank you to Rebellion Publishing and Netgalley for the review copy in exchange for an honest review. This does not change my opinion in anyway.

Since the Orisha War that rained thousands of deities down on the streets of Lagos, David Mogo, demigod, scours Eko’s dank underbelly for a living wage as a freelance Godhunter. Despite pulling his biggest feat yet by capturing a high god for a renowned Eko wizard, David knows his job’s bad luck. He’s proved right when the wizard conjures a legion of Taboos—feral godling-child hybrids—to seize Lagos for himself. To fix his mistake and keep Lagos standing, David teams up with his foster wizard, the high god’s twin sister and a speech-impaired Muslim teenage girl to defeat the wizard.

David Mogo, Godhunter is an interesting own voices fantasy novel set in our world, that with a bit of extra attention could have been great. Instead it flies just short of falling flat.

I was quite honestly very excited for this book. I mean it is an own voices book when it comes down to the culture. Lagos, Nigeria is where the author comes from and just that alone is something that sets this book apart. Another thing that I think will appeal to a lot of people is that there is basically no romance in here.

But the book didn’t quite build up as I expected it to be. Essentially this book is set up in 3 parts that felt more like 3 novella’s due to the time jumps and arcs between them. Especially between part 1 and 2 which was six months. It meant that each part had to wrap its ‘arc’ up action and plot wise. It left not as much room for world building as I would have liked to have seen. In the first part there was room to capture the feel of Lagos and how the Falling (the big event that happened before the book starts) affected the city. It made this first part so much more appealing to me.

Part 2 and part 3 were more focused on a bigger plot and the journey to finding oneself in being a demigod. Set between humans and gods. There was less room for world building and the things that I thought would be expanded on. More on the Gods, the Island and Odon, got left behind. That could have been okay had the journey to finding oneself not been as boring and unnecessary. Or some scenes were in any case like a scene where he got called out for showing his anger once and all of sudden he was losing credibility with everyone. Just things like that, that didn’t make sense in the grand scheme of what the author seemed to want to do here.

It is written in a first person present point of view. Again the first part, David’s voice was incredibly strong. I liked him. But I felt we lost a lot in the second and third part. I feel like we lost a lot to him repeating himself.  Even so I did still like him for the most part. I also liked his relationship with his adopted father. An interesting thing here is code-switching which is switching between two or more languages within one conversation which is what happened often in speaking between these two. However it took some getting used to as it isn’t quite so easy to  figure out what they are saying. Sometimes I don’t think I actually caught the meaning.

Another character I found interesting was Fati, a teenage girl David rescues from an adult wizard meaning to marry her. She comes to live with him and his adopted father. She is speech-impaired. I wish there had been more room for her personality to expand. Much of her time on the page is spend with others talking (who inhabit her at some point) and not so much coming from herself. I also dislike that at the end she was ‘cured’.

Having said that, if you are looking for an African fantasy and are prepared to go into this novella set up I think one can really enjoy this. I think this author does have some great ideas and I can’t wait to see what he will come up with in the future.