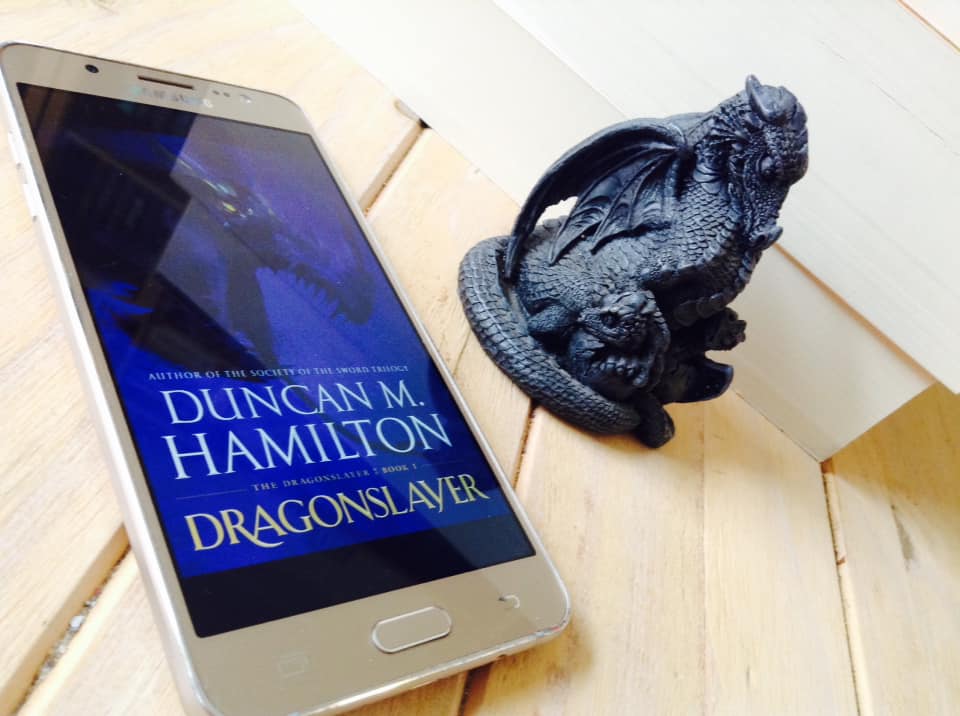 Thank you to Netgalley and Macmillon-Tor/Forge for the review copy in exchange for an honest review. This does not change my opinion in anyway.

Once a member of the King’s personal guard, Guillot dal Villevauvais spends most days drinking and mourning his wife and child. He’s astonished—and wary—when the Prince Bishop orders him to find and destroy a dragon. He and the Prince Bishop have never exactly been friends and Gill left the capital in disgrace five years ago. So why him? And, more importantly, how is there a dragon to fight when the beasts were hunted to extinction centuries ago by the ancient Chevaliers of the Silver Circle?
.
On the way to the capitol city, Gill rescues Solène, a young barmaid, who is about to be burned as a witch. He believes her innocent…but she soon proves that she has plenty of raw, untrained power, a problem in this land, where magic is forbidden. Yet the Prince Bishop believes magic will be the key to both destroying the dragon and replacing the young, untried King he pretends to serve with a more pliable figurehead.
.
Between Gill’s rusty swordsmanship and Solene’s unstable magic, what could go wrong?

I am at a loss as to how to rate this book. On the one hand I enjoyed it. On the other hand there were things missing. The missing thing? Worldbuilding.

And let us just start right off with that. This book is a high fantasy, inspired by our own Medieval history.  There is a map at the front of the book. Which is good because I would otherwise have no idea. There are three surrounding countries/regions of which two were mentioned in the book. But nothing that really gave me much on where they were and what the relations really were. But even worse I have no idea about this country. Most of it took place in a few towns and cities but I could not tell you anything of interest about any of them (well except the witch hanging perhaps). The biggest problem is that all the world building and even character histories (though I’ll get back to that) are only there when it serves a purpose to the plot. And even then it is thin. And from an adult fantasy I have quite a bit more expectations than that.

And it is a shame because this author clearly can write. I enjoyed his writing style. I enjoyed most of the plot. The dragon’s few point of views were really interesting to read about (though I do have a lot of question marks regarding the dragon population and how long this particular dragon slept).  I couldn’t hate the dragon. I completely understood him. Burn them all I’d say.

Our main character Gil was a very interesting character. I liked him. He was an older man, retired from the king’s personal guard. Turned to alcohol. Alcoholism and detoxing are a thing in here. It is in the background but it is there.  The thing however is that again a lot of his history is only mentioned because it works with the plot. The reason  he ‘retired’, the death of his wife and son (who didn’t even get a name or reason of death), his ex-friendship with the Prince Bishop. A lot of mentions but no depth and no memories. If it didn’t matter to the plot, it wasn’t there. And this was the case for all the characters.

Solene was our other main character, with magic, about to be burned on the pyre for being a witch. She was a nice character to have next to Gil, that also showed us another side of the society. The witch huntings, the use of magic being illegal. But we got little on her history before she ran away from her hometown. Because it didn’t matter to the plot.

And for me that with the world building is something I can’t quite see past. This could have been a great book with depth and a great world but just those things were discarded.