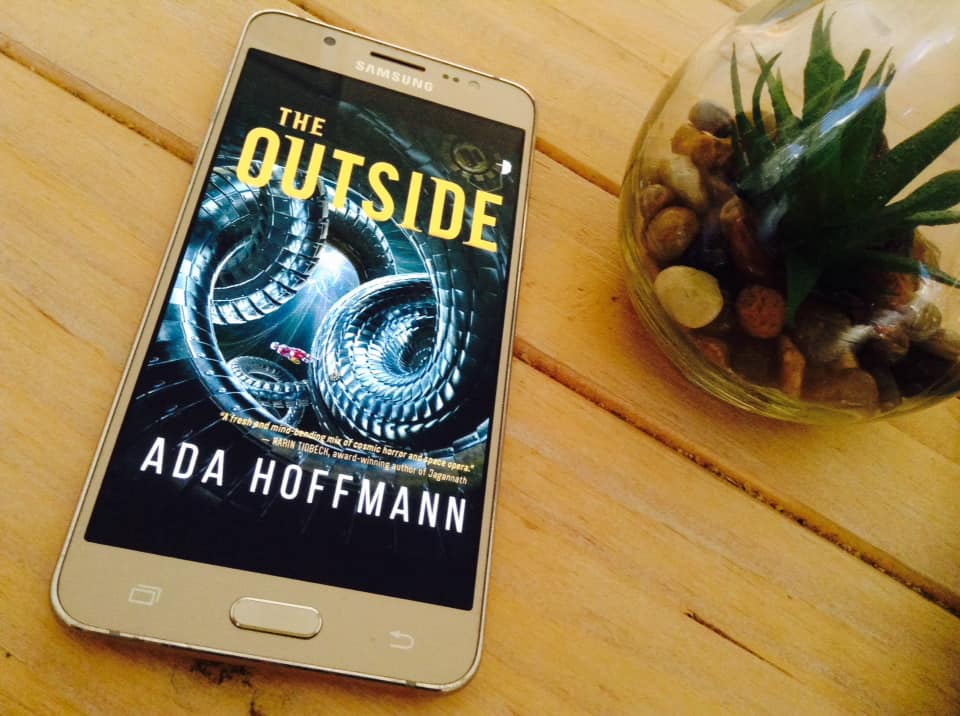 Thank you to Angry Robot and Netgalley for the review copy in exchange for an honest review. This does not influence my opinion of the book in any way.

The Pride of Jai was supposed to be humanity’s greatest accomplishment—a space station made entirely by humans and their primitive computers, without “divine” cyber-technology provided by the sentient quantum supercomputers worshipped as Gods. And it was supposed to be a personal triumph for its young lead scientist, physicist Yasira Shien, whose innovative mathematics was key to the reactor powering it.
.
But something goes wrong in Yasira’s reactor, leading to an unexplained singularity that destroys The Pride of Jai and most of the people on it—and placing Yasira in the sights of angry Angels, the cyborg servants of the Gods.
.
According to the angels, Yasira’s reactor malfunction was the latest in a rising tide of disasters, intentionally caused to exploit vulnerabilities in the very pattern of spacetime and usher in horrific beings from beyond reality itself. They believe that the woman behind the disasters is Yasira’s long-vanished mentor, Dr Evianna Talirr—and they believe that Yasira, Dr Talirr’s favorite student, is the only one who can help them find her.
.
Spirited off to the edge of the galaxy and with her whole planet’s fate, and more, hanging in the balance, Yasira must decide who to trust: the ruthless angels she was always taught to obey without question—or the heretic scientist whose plans could change everything she knows to be true about reality.

As soon as I saw in the netgalley synopsis that the main character was autistic I didn’t know how quickly to hit the request button. I was super excited to read it, and clearly I enjoyed it with my rating of 4 stars, but it also was very different from my expectations. It was a lot harder to get a grasp on. Confusing.

Beyond the autistic mc I did not retain a lot of the synopsis except that it was clearly sci-fi. Which is why I was so confused in the first 100 pages of the book. Our MC, Yasira,  has been working on a large project but when it explodes and kills a large portion of the project workers, it hurls her into the middle of a large scale heresy.

You see this sci-fi futuristic setting has Angels and Gods.  For the longest I couldn’t marry this in my head with how clearly the angels were more technologically advanced until it was point blank said in the text that the Gods were created from human machines. They developed and made the Angels who originally were humans but now seem to be more machine.  One of the biggest heresy one can commit is to go beyond the technological advancement that the Gods permit. We are only allowed to evolve technologically until a certain point. Where exactly that point is remains quite vague to me. And in that regard I feel that the world building is somewhat lacking. Yasira committed this unknowingly and is then being pitched by the angels to go against her former mentor.

This novel is a lot more introspective than the synopsis would suggest. There isn’t actually that much action except for about 4-5 key settings. We spend a lot of time in Yasira’s head, going through science and evaluating the situation. What does it all mean? And what is she suppose to do. It was an interesting balance and not boring at all to read about.

Yasira does give us some different perspectives as she is autistic. This isn’t glossed over but rather talked about. Things that Yasira has had to deal with in her life, how people have regarded her in the past. Her mentor was also neuroatypical character. I think the rep was good and from what I read it is own voices in that regard.

Yasira is also queer and in a relationship with one of the other female project workers.  I’m glad that was also a part of who she was. I had some trouble really feeling their relationship because Yasira kept referring to her partner as the good girl which I found highly annoying. Especially as her partner was extremely good to her.

The angels can shapeshift and there was some interesting talk about how one identified as male but was fine with being referred to as she when she was in a female form. However there was one line that bothered me and I can imagine might bother those that use they/them pronouns. It suggested that if you were in a female form and you didn’t use female pronouns it was sloppy, not right. However later on in the story they/them pronouns were used for another angel briefly so I guess it was a view of the character only. Still I can imagine it bothering people as I said.

Even so I think this is a fine and unique sci-fi novel that seems to be hinting at a sequel at the end there.

4 thoughts on “The Outside // Book Review”