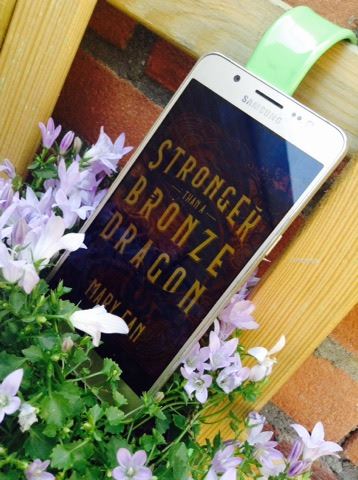 Thank you to Page Street Publishing and Netgalley for the review copy in exchange for an honest review. This is no way changes my opinion of the book.

When a powerful viceroy arrives with a fleet of mechanical dragons and stops an attack on Anlei’s village, the villagers see him as a godsend. They agree to give him their sacred, enchanted River Pearl in exchange for permanent protection—if he’ll marry one of the village girls to solidify the alliance. Anlei is appalled when the viceroy selects her as a bride, but with the fate of her people at stake, she sees no choice but to consent. Anlei’s noble plans are sent into a tailspin, however, when a young thief steals the River Pearl for himself.
.
Knowing the viceroy won’t protect her village without the jewel, she takes matters into her own hands. But once she catches the thief, she discovers he needs the pearl just as much as she does. The two embark on an epic quest across the land and into the Courts of Hell, taking Anlei on a journey that reveals more is at stake than she could have ever imagined.
.
With incredibly vivid world building and fast-paced storytelling, Stronger Than a Bronze Dragon is great for readers who are looking for something fresh in epic fantasy.

When I came across this book on Netgalley the cover immediately drew my attention. A Dragon and the typography of the yellow title. I like. Of course the title mentioning a dragon helped. There are dragons in here, just not quite the way you’d think. That didn’t stop me from enjoying this splendid standalone novel.

This book has everything. It is a strange mixture of steampunk, paranormal, magic, and do I dare say, a touch of mythology. There are air ships, steampunk dragons, pearls gifted by a dragon, uncommon fantasy creatures, hell, unwilling brides, thieves. There is so much jammed in this book that it is a little overwhelming at times. Sometimes it maybe had too much. With that I mean that some elements could have used more room to be fitted in world building wise.

Having said that though, there is an incredible pace throughout this book. It keeps going and going and going. I just kept on turning and turning and turning the pages, just to keep up. Yet there was enough room left to explain the world satisfactory and characterize the characters. Seeing as this novel is under 400 pages AND a standalone that is quite a feat.  The plot doesn’t stop with the initial quest though initially I felt that we were building up to that moment. Somehow she managed to hold onto that feeling as we build up to the actual ending.

Our main character Anlei is a bit of a spitfire, getting the chance to fight in the guard of her village, it is one of the things she wanted the most. However when she gets offered up as a bride to a powerful older man to save her village definitely she feels she has no other choice but to accept. It does not go easy for her and she ends up going on her first and quite probably her final adventure.

While I liked Anlei, I loved Tai. He is the kind of character I am always drawn. The humor and endless teasing. He was able to draw it out of Anlei too which was great to see. I loved how they were put together because they weren’t opposites. In fact Anlei recognized a lot of herself in him that helped her grow and see her own behavior in a different light. I think that was a great way to go about it.

7 thoughts on “Stronger Than a Bronze Dragon // Book Review // #Wyrdandwonder”