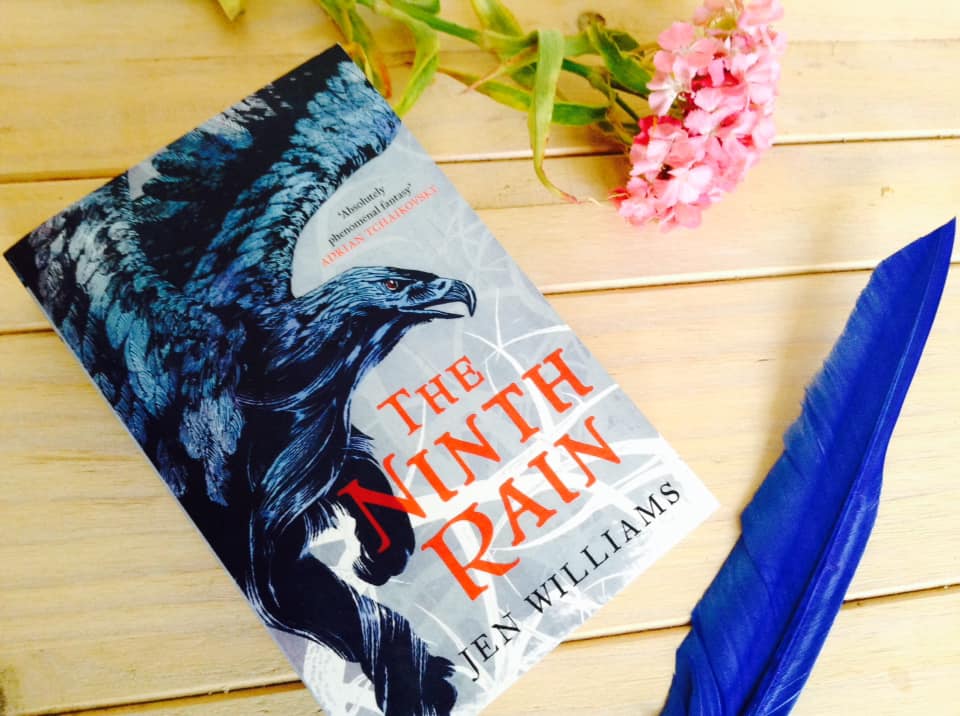 The great city of Ebora once glittered with gold. Now its streets are stalked by wolves. Tormalin the Oathless has no taste for sitting around waiting to die while the realm of his storied ancestors falls to pieces – talk about a guilt trip. Better to be amongst the living, where there are taverns full of women and wine.
.
When eccentric explorer, Lady Vincenza ‘Vintage’ de Grazon, offers him employment, he sees an easy way out. Even when they are joined by a fugitive witch with a tendency to set things on fire, the prospect of facing down monsters and retrieving ancient artefacts is preferable to the abomination he left behind.
.
But not everyone is willing to let the Eboran empire collapse, and the adventurers are quickly drawn into a tangled conspiracy of magic and war. For the Jure’lia are coming, and the Ninth Rain must fall…

I know I’ve said this before but I will say it again. Sometimes there are books that I don’t fall in love with right away. I doubt myself sometimes on it because other seem to love it. And yet I find myself halfway through and bam I am in love. This is what happened with The Ninth Rain for me.

But once it gets truly going, boy, does it go.

The Ninth Rain takes place in Sarn, a realm that is somewhat in ruin because of the continued invasions of the Jure’lia. The inhabitants of Ebora, which lies in Sarn, are those that fight this enemy. The Eborans live longer and are generally stronger. Or at least they were until after the Eight Rain (as the invasions are called). Until they started feeding on blood. Now it has been many, many years. Ebora is in ruin. Sarn is taken over by spirits wandering the lands.

Sarn is such an interesting and vivid place. There are just so many elements to it that gives it such a creepy vibe. The inhabitants are rich and have such a long history with each other. Things weave together so skillfully.

We follow a few different story lines throughout the book. One is the quest for information on the pieces left behind by the Jure’lia. Another is the quest to restore Ebora back to its former glory. And there is also a runaway fellwitch who just wants her freedom.  Some of the plot twists were a bit predictable. Looking at you Ebora. Even so, at that point, you are already so into the story and it is written so well that it is hard to be bothered by it.

Amidst of these story lines we follow a few characters. There is our main trio. Vintage, an explorer. Tormalin, an Eboran who walked away. Noon, a Fellwitch who escaped. It took me a bit to get used to these characters and they to each other to be honest. But looking back that is what made it realistic. Their bonds grew throughout the book. Especially the bond between Tormalin and Noon. Noon is I think the character that I ended up loving the most at the end. She is so vulnerable and yet still so strong to be able to escape.

But there are other characters that we get a point of view of. I especially enjoyed following Aldasair on occasion because he is such a different character from the rest. Soft, kind, open. He looks around and tries to remember where everyone else is busy dying or trying to solve things. He is just trying to hold on.

So yes in the end I fell in love with this book and this world and some of these characters. There is still so much left to be discovered. I can’t wait.