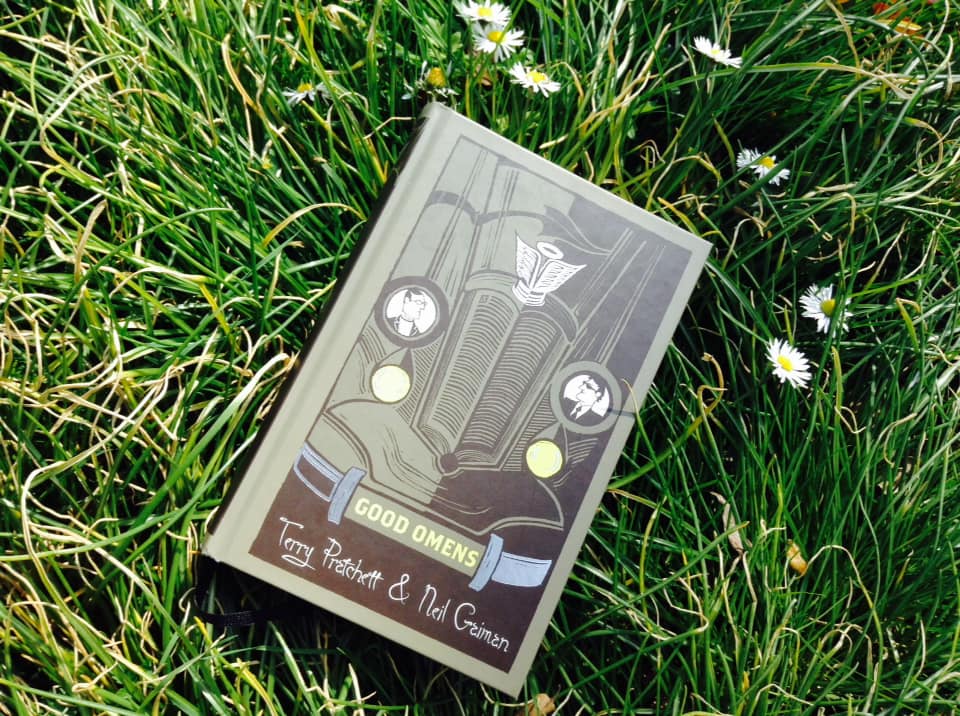 There is a hint of Armageddon in the air. According to the Nice and Accurate Prophecies of Agnes Nutter, Witch (recorded, thankfully, in 1655, before she blew up her entire village and all its inhabitants, who had gathered to watch her burn), the world will end on a Saturday. Next Saturday, in fact. So the Armies of Good and Evil are massing, the four Bikers of the Apocalypse are revving up their mighty hogs and hitting the road, and the world’s last two remaining witchfinders are getting ready to Fight the Good Fight. Atlantis is rising. Frogs are falling. Tempers are flaring, and everything appears to be going to Divine Plan.
.
Except that a somewhat fussy angel and a fast-living demon are not particularly looking forward to the coming Rapture. They’ve lived amongst Humanity for millennia, and have grown rather fond of the lifestyle. So if Crowley and Aziraphale are going to stop it from happening, they’ve got to find and kill the AntiChrist (which is a shame, really, as he’s a nice kid). There’s just one glitch: someone seems to have misplaced him.

Shortly after I had given birth to my son 2,5 years ago I picked up Good Omens. I read 50% and it did nothing for me. I put it down. It was not the right time for me and this book. I am glad I did. I finally picked it up again, just in time for the tv show.

Good Omens is an interestingly mass of styles between Terry Pratchett and Neil Gaiman. Especially Pratchett’s voice shines through in the no chapters, Death,  lengthy descriptions and omnious. There is also the clear show where both of them like to just go off kilter to add in side characters to show the story from a different side. It is an interesting way to tell a story and with the added in British humor, a story that is not going to be for everyone.

The basic plot line is that a demon is assigned to put the antichrist in the right family for Armageddon to start eleven years later. The final battle between Heaven and Hell. He is not feeling that much so he calls on his old friend, the angel, who ends up going along with him. Eleven years they work hard to make sure Armageddon won’t start, only to discover that, oops, the Antichrist was put in the wrong family. Yes, it is that kind of a book.

What I really enjoyed about this book were the demon, Crowley, and the angel, Aziraphale. Their relationship was quite interesting as they are clearly on opposite sides but over the many, many, many years they have known each other that doesn’t seem to mean quite as much. There is an understanding between the two of them. They get each other, despite how different they are. They both appreciate life on Earth in a way that other demons and angels don’t seem to do. Honestly, there just wasn’t enough of them in the second half however.

The antichrist, or Adam, was quite interesting. At eleven years old he’s grown up as his own little leader of a group with a love for his own little town. With all its weird quirks. It was interesting to see him discover what he had in him. And Dog, Dog was the cutest.

One of the reasons I’m rating this 4 stars is because at some point I felt that the pace was being drawn out of the story. The inclusion of the witch hunter and Newt just didn’t really work for me. And I thought there wasn’t enough of a climax at the end of the story.

But I still really enjoyed it and at times I had to laugh quite hard. That alone deserves quite a lot.