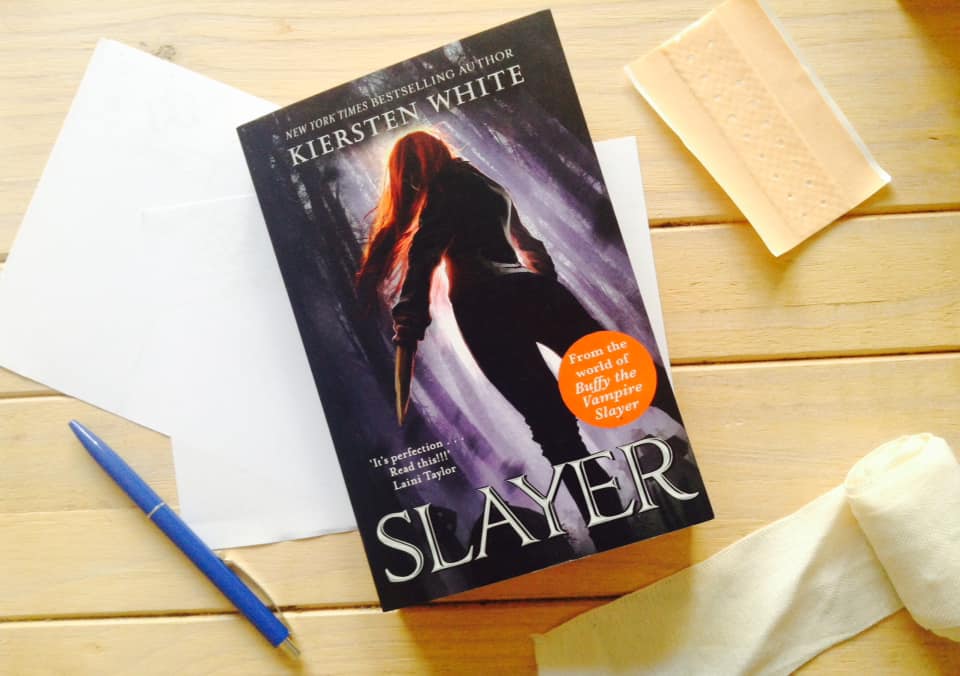 Thank you to Netgalley and Simon and Schuster Uk Children’s for the ebook review copy in exchange for an honest opinion. It does not alter my opinion of the book in anyway. (I in the mean time I also bought the physical copy which you see in the photo)

Nina and her twin sister, Artemis, are far from normal. It’s hard to be when you grow up at the Watcher’s Academy, which is a bit different from your average boarding school. Here teens are trained as guides for Slayers—girls gifted with supernatural strength to fight the forces of darkness. But while Nina’s mother is a prominent member of the Watcher’s Council, Nina has never embraced the violent Watcher lifestyle. Instead she follows her instincts to heal, carving out a place for herself as the school medic.
.
Until the day Nina’s life changes forever.
.
Thanks to Buffy, the famous (and infamous) Slayer that Nina’s father died protecting, Nina is not only the newest Chosen One—she’s the last Slayer, ever. Period.
As Nina hones her skills with her Watcher-in-training, Leo, there’s plenty to keep her occupied: a monster fighting ring, a demon who eats happiness, a shadowy figure that keeps popping up in Nina’s dreams…
But it’s not until bodies start turning up that Nina’s new powers will truly be tested—because someone she loves might be next.
.
One thing is clear: Being Chosen is easy. Making choices is hard.

Unlike some people Buffy the Vampire Slayer was not my entire childhood. I actually didn’t watch it as it aired but later bought the boxset and since have watched all seasons at least twice. So I do have a big love for Buffy and the Scooby gang. So I am sad to say that this book leaves me conflicted. I had hoped for so much more…epicness. And it wasn’t there.

This story starts us about two months after the ending of the series with Nina, one half of a twin who have grown up with the Watchers since age seven or so. Now that most of the watchers have died they are left with a small group in a castle in Sancoom. Nina is a healer and was kept from any fighting or training in all her years there. Yet it turns out she is the slayer. The LAST slayer.

I have some problems with the plot and the pacing. I think in places the pacing was just off. Too much talking and empty air that went nowhere. I mean guess that is who the Watchers are but that doesn’t necessarily make for an interesting read. As for the plot, except for the ending there though I had some feeling, there wasn’t much surprise in here. It was all very typical and couldn’t stand apart in the crowd. However I liked the ending. The choice that Nina makes there as well as Artemis.

As far as characters go I can see why Nina is so appealing to some. She is the typical teenager like Buffy was. I liked the inner fight she had going on with the healer part of her and the slayer part of her. How could she get those to be one? Could that ever happen? However I had a lot of problems with the constant harping on Buffy and Giles. Buffy and Giles already have such a big place in my heart and it was hard to see how she judges them without having been in the situation. I know this changes towards the ending but that didn’t  make it any less annoying to read about.

I think I cared more for the side characters than Nina. Rhys is just a sweet cinnamon roll. I really felt for Imogen. And Cillian was just another cute cinnamon roll. Doug amused me a lot. I would have loved to have seen more of them in places, to be deepened out more. But I think that might come in a next installment.

I guess this book just very much feels like a first book. Like a pilot of a new series that needs to set this up and all the epicness is going to come later. I hope it does.