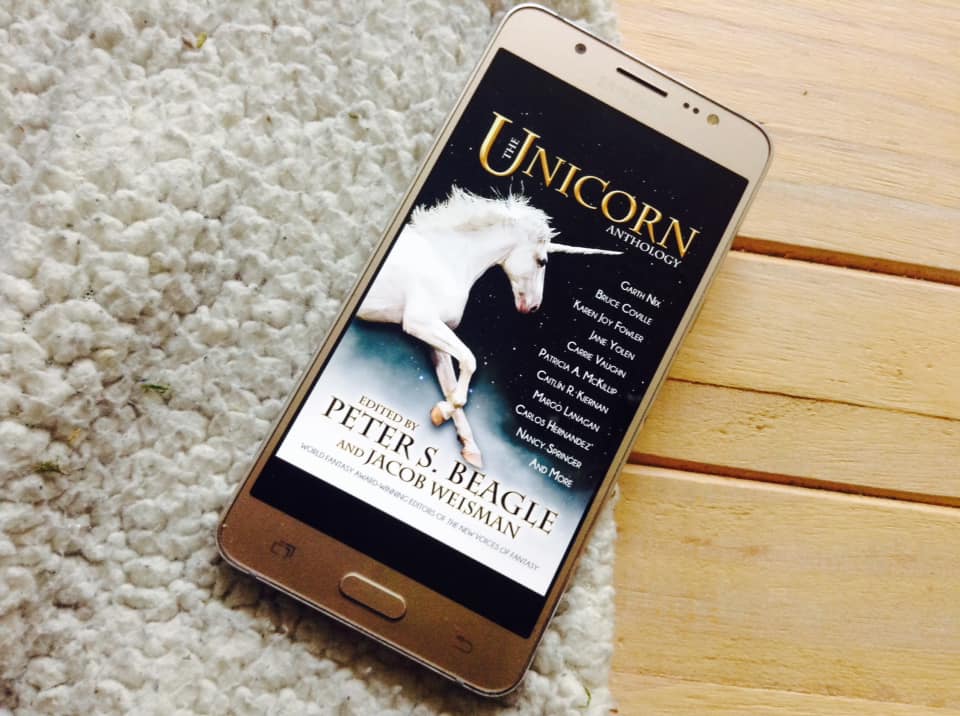 Thank you to Netgalley and Tachyon Publishing for the review copy in exchange for an honest review.

Unicorns: Not just for virgins anymore. Here are sixteen lovely, powerful, intricate, and unexpected unicorn tales from fantasy icons including Garth Nix, Peter S. Beagle, Patricia A. McKillip, Bruce Coville, Carrie Vaughn, and more. In this volume you will find two would-be hunters who enlist an innkeeper to find a priest hiding the secret of the last unicorn. A time traveler tries to corral an unruly mythological beast that might never have existed at all. The lover and ex-boyfriend of a dying woman join forces to find a miraculous remedy in New York City. And a small-town writer of historical romances discovers a sliver of a mysterious horn in a slice of apple pie.

When I started this anthology I guess I had different expectations. I thought this anthology was going to focus more on unicorns. However a lot of these stories just use unicorns in the background. That could have been really interesting if the plots hadn’t overall been so filled with virgins and the same old unappealing ideas. Some of the writing also wasn’t stellar.

The foreword by Peter Beagle mentions that some of these stories were older (think eighties) and that a lot of them were already used in other anthologies. There is little new to be found here. While I think some older stories certainly can be very current in today’s society, in some ways a bunch of these really don’t fit.

I would also like to add that Peter Beagle clearly doesn’t want to be known as the unicorn guy from his foreword and that really didn’t make it that appealing to start this book.

If you do plan on picking up this book I think there are about three stories that make it worth your while out of sixteen. That is Stampede of Light by Marina Fitch, The Highest Justice by Garth Nix and The Transfigured Hart by Jane Yolen.

The Magical Properties of Unicorn Ivory / 2 stars
Bad writing. Bland. Lying about death to a child is never a good idea.

The Brew / 2 stars
The story was unappealing. There was no actual unicorn in it. Just a nudge to it. The mc is also in the Netherlands as she tells the story and makes a weird reference to black pete we have and ties it to Christmas. No we don’t have black elfs as the author called it. We have black pete, a racist figure tied to Sinterklaas that is a children’s holiday at the start of December.  Don’t refer to something you don’t know anything about.

A Hunters Ode to Bait / 2 stars
Disgusting relationship at the end where the hunter who BOUGHT his virgin bait at the age of 12-13 ends up with her. Initial idea I liked (though the whole bait has to be virgin makes me roll my eyes).

Ghost Town /3  Stars
This was decent story. Nothing outstanding.

A Thousand Flowers / 2 stars
TW: Suicide
A confusing story that has the point of view changed 3 times in first person point of view without much of a hint towards it going to change.

The Maltese Unicorn / 3,5 stars
TW: Rape / Drugging
Compelling story of an mc that works in a book store and does odd jobs for a supernatural person in the city.

Stampede of Light / 4 stars
Compelling story about being seen

The Highest Justice / 4 stars
A story where the unicorn is more in the foreground has to be applauded in this anthology.

The Lion and the Unicorn / 3 stars
Just a decent story

Survivor / 2 stars
All I can say is meh here.

Homeward Bound / 2,5 stars
While the idea was interesting the writing was bland and boring.

Unicorn Triangle / 3 stars
I liked the idea but the story was cut off way too early to really draw you in.

My Son Heydari and the Karkadarnn / 3 stars
A Peter Beagle short story which was decently written. I got the impression it was set in Africa though and I don’t think he should have nessecarily gone there.

The Transfigured Hart / 4 stars
A beautiful story about two children finding friendship amidst finding the beauty of a unicorn.