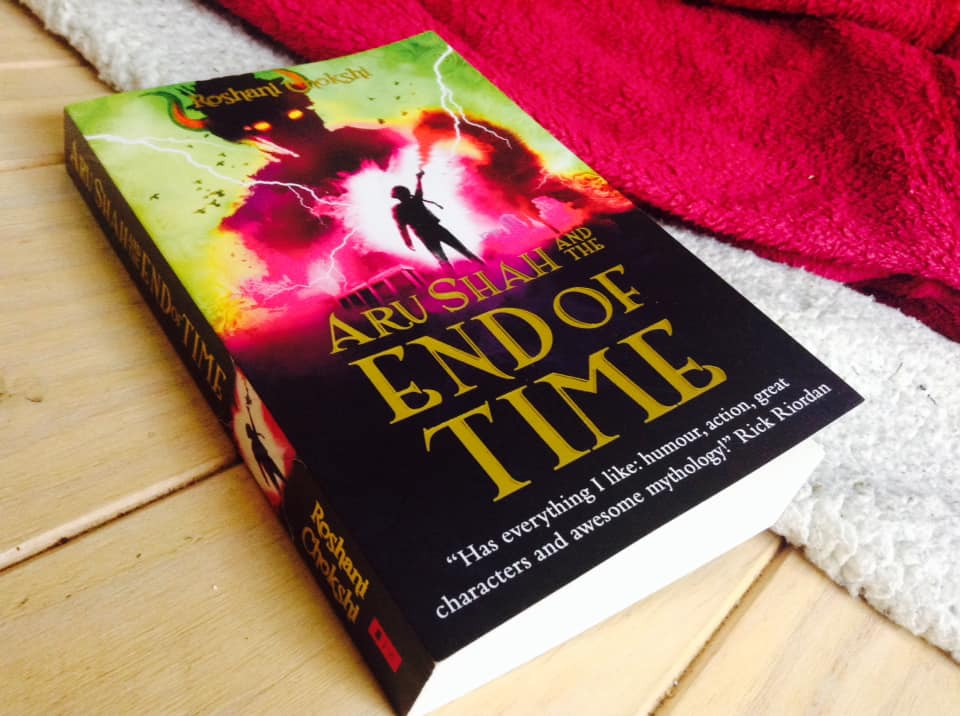 Twelve-year-old Aru Shah has a tendency to stretch the truth in order to fit in at school. While her classmates are jetting off to family vacations in exotic locales, she’ll be spending her autumn break at home, in the Museum of Ancient Indian Art and Culture, waiting for her mom to return from their latest archeological trip. Is it any wonder that Aru makes up stories about being royalty, traveling to Paris, and having a chauffeur?
.
One day, three schoolmates show up at Aru’s doorstep to catch her in a lie. They don’t believe her claim that the museum’s Lamp of Bharata is cursed, and they dare Aru to prove it. Just a quick light, Aru thinks. Then she can get herself out of this mess and never ever fib again.
.
But lighting the lamp has dire consequences. She unwittingly frees the Sleeper, an ancient demon whose duty it is to awaken the God of Destruction. Her classmates and beloved mother are frozen in time, and it’s up to Aru to save them.
.
The only way to stop the demon is to find the reincarnations of the five legendary Pandava brothers, protagonists of the Hindu epic poem, the Mahabharata, and journey through the Kingdom of Death. But how is one girl in Spider-Man pajamas supposed to do all that

After having read some great middle grades recently Aru Shah left me with some mixed emotions. The overall recommendations and hype  this book has gotten had maybe gotten my hopes up a bit too high. However I have a lot of hope for the series as a whole.

Aru Shah retells the story of the Pandava brothers from Hindu mythology through them being reincarnated. In girls it seems this time around which I think was a great twist. Our mc has been having trouble fitting in with the popular and rich kids at her school and as a result has been lying a bit. Or a lot. A dare from her peers has her lighting a lamp at the museum her mother works at. What harm can lighting a lamp, do right? It is not like it is actually cursed. Or is it?

I personally had the most trouble with the first half. I had a hard time getting into the story of Aru as a reincarnation and her sister. There were certain forced elements to the story that felt like going through the motions. They needed to get out of the way. The conversations and characterizations also felt forced, especially with Aru’s sister Mini who initially felt like a bad stereotype. However the second half of the book was so much stronger. I felt that the characters were so much better characterized, the prose flowed and the interactions between the characters really came together, with all the struggles that entailed. I did think the wrap up at the end took a little too long.

Having said that I do think that it deals with some interesting themes and topics. Aru’s lying for instance. While condemned got turned around into something more positive, imagination. They found a positive use for it which I really liked. And there are more like privilege, absent parents, repercussions of once choices and so on. I think in that regard this is an import middle grade book. To be felt seen.

The world building was good. There wasn’t a moment of info dumping along the way. I kind of went up and down on what I wanted to rate this book. My initial feeling was 3,5 but I think I might up it to 4 because it does have a lot of good points to. And I think now that we have the initial set up out of the way, the team up of Aru, Mini and Boo (the fearsome pidgeon) will  bring us much joy in the future.