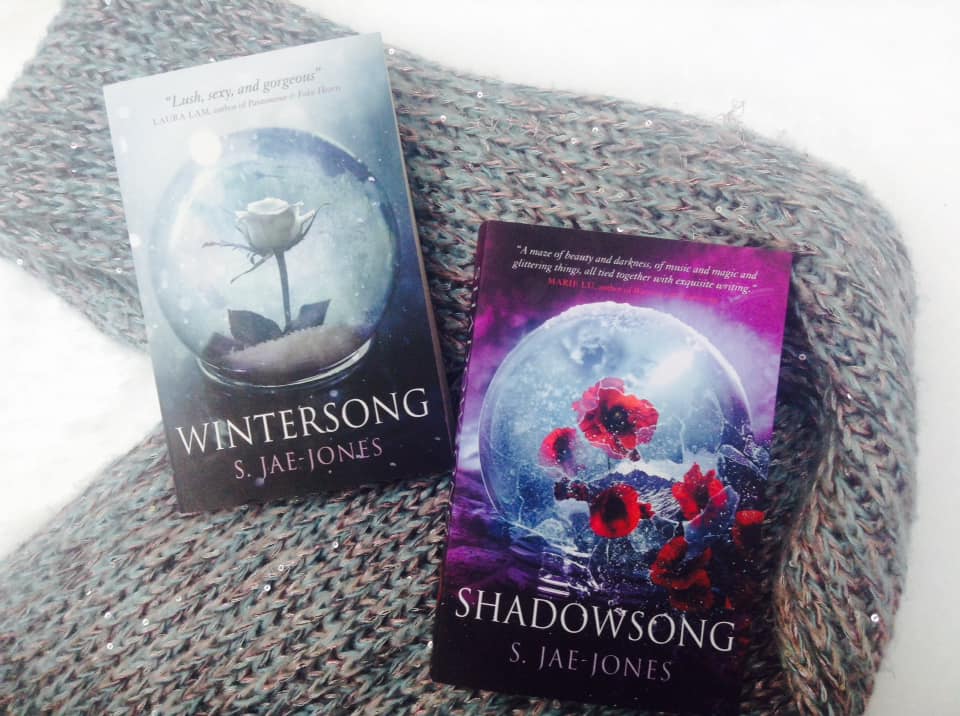 The last night of the year. Now the days of winter begin and the Goblin King rides abroad, searching for his bride….
.
All her life, Liesl has heard tales of the beautiful, dangerous Goblin King. They’ve enraptured her mind and spirit and inspired her musical compositions. Now eighteen and helping to run her family’s inn, Liesel can’t help but feel that her musical dreams and childhood fantasies are slipping away.
.
But when her own sister is taken by the Goblin King, Liesl has no choice but to journey to the Underground to save her. Drawn to the strange, captivating world she finds–and the mysterious man who rules it–she soon faces an impossible decision. With time and the old laws working against her, Liesl must discover who she truly is before her fate is sealed.

Wintersong and its conlusion Shadowsong are an interesting mix of retellings:  The Erlkoning, Labyrinth, the Goblin Market and the tale of Hades and Persephone.  I was wary of this duology and I had every right to be as it turned out, but I still enjoyed it to a point.

Wintersong centers around Liesl, the oldest and of course ugly sibling. Her younger sister Kathy is of course very pretty and her younger brother is very musically talented. She was always the one glossed over by their father and the males surrounding them. It is a very typical start to a Young Adult novel one would say. And it is. But after that it starts to move away from that feeling it gave me.

S Jae-Jones certainly knows how to write and creates a very deliciously, romantic and dark tale of finding one self. Also about seeing your own self for the first time. Truly seeing within yourself. She uses whimsical and sometimes metaphorical language for that. It creates a very eerie feeling but sometimes it also missed the mark a little. Especially in conversation between characters it kept bouncing back and forth without one saying anything of meaning it felt like it. Of course this is also a thing of the time period where this takes place where being straightforward was not exactly applauded.

Music also plays a large part of the book. I enjoyed that even though I am not the biggest lover of classical music and I don’t play an instrument anymore. I do have to admit that the parts where they used music to express emotions and converse kind of went over my head.

In the first book a big extra character in the book is the Underground. It is dark, mysterious and it seems to hold them all captive, including the goblin king. However in the second book this character all but disappears and I feel like we truly lost something with that.  Its loss left a hole in the eerie feeling of the setting.

That wasn’t the only flaw Shadowsong had. The plot didn’t truly start until the halfway mark of the book and even then it remained incredibly slow. I also missed the relationship between Liesl and her brother. So much sudden misunderstanding between the two that could have been easily solved if one of them had just opened their mouth. But they didn’t.

I know a lot of people have trouble with Liesl, and I’ll be the first to admit that I am not particularly fond of her. However there is an author’s note at the start of Shadowsong that mentions that Liesl  (as does the author) has bipolar disorder. I think that places her behavior in a slightly different light. I also really appreciated that the author mentioned various trigger warnings before the book starts. That is how it should be done!

Having said that I do think that one point of criticism regarding Liesl in Wintersong is valid and that is how she pushes her lover to have sex with her. The other way around we do not like to see so we should not be accepting this here so readily either.

Despite Josef’s cold shoulder to his sister later on I did really like him as a character. There is something so vulnerable about the boy. I wish we had gotten bit more on his relationship with Francois.

Overall I enjoyed the duology but it wasn’t entirely satisfactory.  However I am very curious in this authors upcoming book and see how I enjoy that one. There were enough things in her writing that I want to read more by her