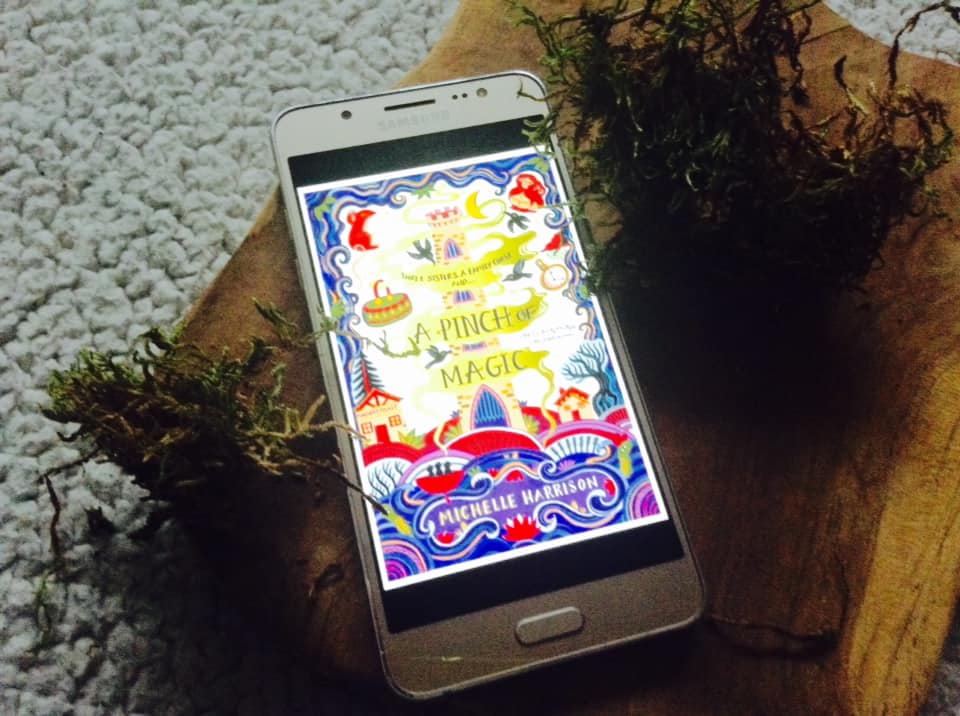 Thank you to Netgalley and Simon and Schuster UK for the review copy in exchange for an honest review.

Three sisters trapped by an ancient curse.
Three magical objects with the power to change their fate.
Will they be enough to break the curse?
Or will they lead the sisters even deeper into danger?

While I don’t read it as often as I like, Middle Grade fantasy books can be such gems. A Pinch of Magic was one of those for me. When I requested this book there was no cover yet so you can’t accuse me of being lured in by the cover which you have to admit is just gorgeous. I was lured by the synopsis of three sisters and three magical objects.

While this book is in theory about 3 sisters it focuses all its attention on the middle sister, 13 year old Betty. With her 6 year old sister Charlie she tries to sneak across the water to a nearby city for the Halloween celebrations. But as they are leaving the harbor of their town on a boat their grandmother, and caretaker, appears out of nowhere, dragging them back. Betty isn’t having any of it anymore though and demands to know why they are never allowed to leave the town. That is when grandma spills the beans. They are cursed.

Harrison can write. This books is beautifully written. No sentence is even remotely misplaced. We are swept up in the story with Betty and feel for her when she is so held back by her grandma and then learns about the curse. All her dreams, crushed. The book is full of magic and it is great to read about.

While I am rating this book 4,5 stars I do have some complaints. While I think Betty is a rather well rounded characters, I can’t quite say the same for her older sister Fliss who is 16 years old. I feel like she gets the short end of the stick with being characterized as boy crazy and falls very in line to her 3 year younger sisters demands. I can’t quite say that much more about her. That is a shame.  I also have one little twitch about the world building as I would have liked a better explanation on how exactly the magical items were created.

However beyond that this story is just a great feel good magic filled story. Great for young and old readers alike. I did see on goodreads that there might be a sequel. The current story wraps up fine however and can easily be read as a standalone. I think that is important, especially in middle grade.

5 thoughts on “A Pinch of Magic / Book Review”