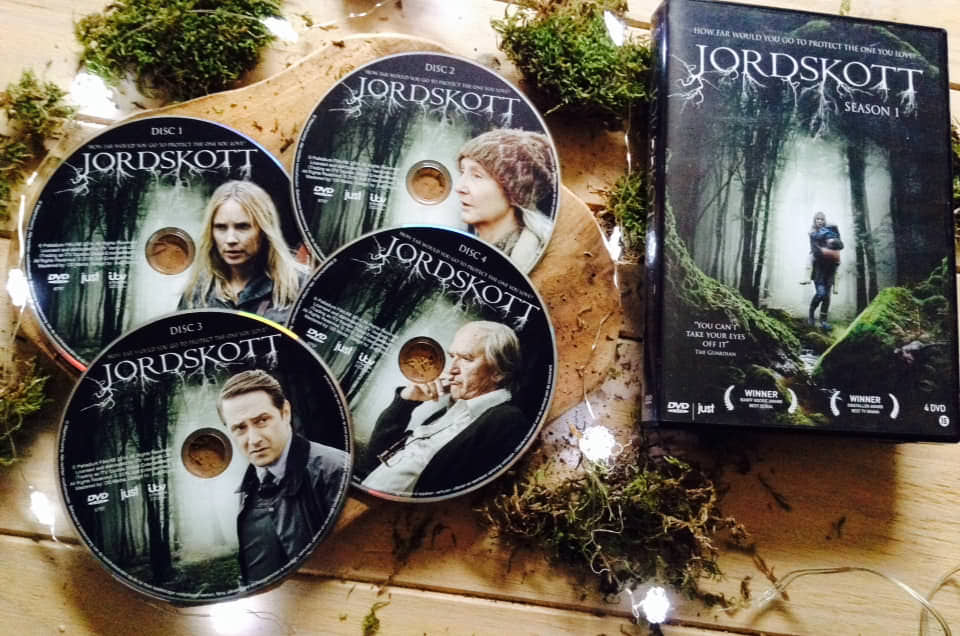 If you follow what I watch in my monthly wrap up posts you will have seen that I finished watching Jordskott season 1 in December. I rarely post reviews or thoughts on tv shows. A lot of them have been giving a lot of attention by the time I start watching them so I feel I will just be repeating what has already been said.

However in this case Jordskott isn’t a very well known tv show despite the first season being shown on tv in 2015 already. The biggest reason for that? It is a Swedish tv show. So I wanted to give it some extra attention and hope to inspire some of you to pick up this wonderful, short, supernatural Swedish tv show.

Jordskott focuses on the small, fictional town Silverhöjd, set in Sweden. Seven years after the dissapearance of her young dauther Josefin, thought to be drowned, Eva Thörnblad returns to her hometown to bury her father. A man who she has had a difficult relationship with.
.
Shortly after her arrival a young boy goes missing and Eva can’t help but feel that this is connected to her missing daughter. She’s never believed Josefin drowned. When she becomes a consultant to the police in the case she is drawn more and more into the surrounding mystery. How does her deceased fathers company and the surrounding forest tie in to the dissapearance? What did her father know?
.
The more she learns the more she sees there is something supernatural going on, and she has to make a decision. Can she sacrifice someone else, another child, to save Josefin?

>>> Jordskott is set, created and made by Swedish people and that is part of the charm. There is nothing polished about the story or the characters. It is raw.  None of the females are ever seen as eye candy or anything of the sort. Everyone stands on their own merit. Romance isn’t an element at all.

>>> Another charm is the setting and the mood that it creates. This could have never worked like it did set in a city. Silverhöjd is a small town, surrounded by a large forest, and many lakes and streams. The community is small and everyone knows each other. Everyone is connected in a way and that is something I remember from living in a small town. Everyone sees everything. It creates a very small world with a tight community. A community with problems. The forest closes the town off so that the outside world seems far away.

The forest itself is grand and beautiful, and almost its own character in the story for the place it takes. This has to do with the dark force that seems to live in it. Nature, and those that protect it, are a force to be reckoned with.

>>> While the story could have turned lecturing as an aspect of the story is the destroying of nature for the greed of humans, it doesn’t. It is more of an if you do this than this is your consequence, deal with it. I never felt that we were told to leave nature alone. Just to be careful of those that live there. That we aren’t the only ones on this planet and that we need to take care of each other.

>>> The characters are as said quite raw and real. Eva is a mother who would do anything for her daugther, or so she thinks, but is confronted by her own morals along the way. Tom has his hackles up but believes in justice and listening more than anything. Wash is split between the people he cares about and the duties that he has.

I think the stand out character for me was Ylva. This older woman who is easily discarded as a straggler with her shopping cart full of things. But she knows so much and she is so very strong. I found her to be quite special.

>>> Lastly there is Nikolas. There are a lot of things in this story that is done well. Sometimes I wondered about Nikolas and the way he was handled, but in the end I think they did right by him in the story. You see, Nikolas is mentally disabled, possibly on the spectrum. It isn’t specified but he was admitted into a special ward for a while where they pumped him ful of medication and because of that his mom is overly protective. I think in the end they let him be his own person and I loved that.

I always find it hard to ‘review’ tv shows but I couldn’t pass up the opportunity to share with you why I was so taken with the first season of this show. I can’t wait to get season 2 at some point.

9 thoughts on “Why You Should Be Watching Jordskott”