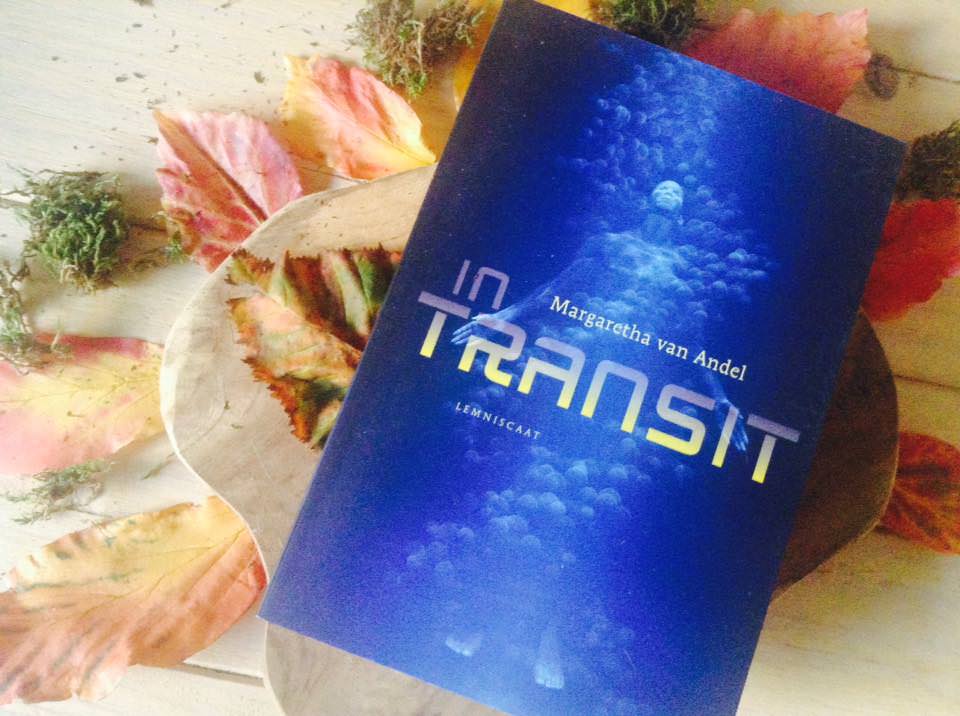 In the year 2275 Rheyn B-71 and Levya C-35 decide to visit the Grauwers during their vacation as a sort of celebration to graduation. Grauwers are apes who resemble homo sapiens a lot. But when they visit they start to doubt these are really apes when they wear clothes and live in houses. Are homo sapiens really extinct?

I got this book about 2 years ago I think and even got it signed at the time but rarely made any time to read it. This sci-fi month I finally sat down for it and finished it in one sitting. I’m glad I finally read it. I enjoyed it, but afterwards I did realize there were some flaws to the whole.

In Transit is a sci-fi book by Dutch author Margaretha van Andel that is set in a world where humans have evolved to homo aerealus and homo sapiens have gone extinct. In zoos and reservations they do keep a species that is quite similar to homo sapiens but those in command come down hard on those that suggest that this species is in fact homo sapiens or at least human. During his rest year Levya wants to see the reservations for himself. This triggers events that he can’t stop from happening.

As you can see this book deals with human evolving, and science one would think. This book focuses mainly on the social implications of evolving and feeling like you are the superior species. But it discards the science aspect very easily. I don’t think a science focus would have been good here but some more science in the background would have firmed up a lot of the world building. The world building in its totality is lacking. There are mentions of wars but I find the history from our modern world to where this book begins very hazy and that is a shame. I’m not even really sure we are still on Earth.

I also feel like the story doesn’t quite get resolved. The ending was lackluster. Where it started of promising and gave us the idea that we would be going into the resistance, that there would be a fight, it kind faltered at the end. There was no real high point. Just the revelation of our 3 main characters and that is it. I am left wondering what is going to happen. Will the resistance manage to save those in the reservations? Will our threesome play a part in this? What repercussions will there be from what happened during this story to the society?

Having said that, the writing style is super easy to get into. It flows well and it took me only 2 hours to get through the entire book. It was addictive. I did find that between Levya’s and Aagje’s chapters, Rheyn’s point of view had short sentences, rarely longer than a page. It was weirdly jarring.

The characters weren’t overly special. Aagje was a fighter but the two boys didn’t stand out too much. Even so they were pleasant enough to follow throughout the story. And I was pleased there wasn’t any real romance in this book.

6 thoughts on “Book Review – In Transit”