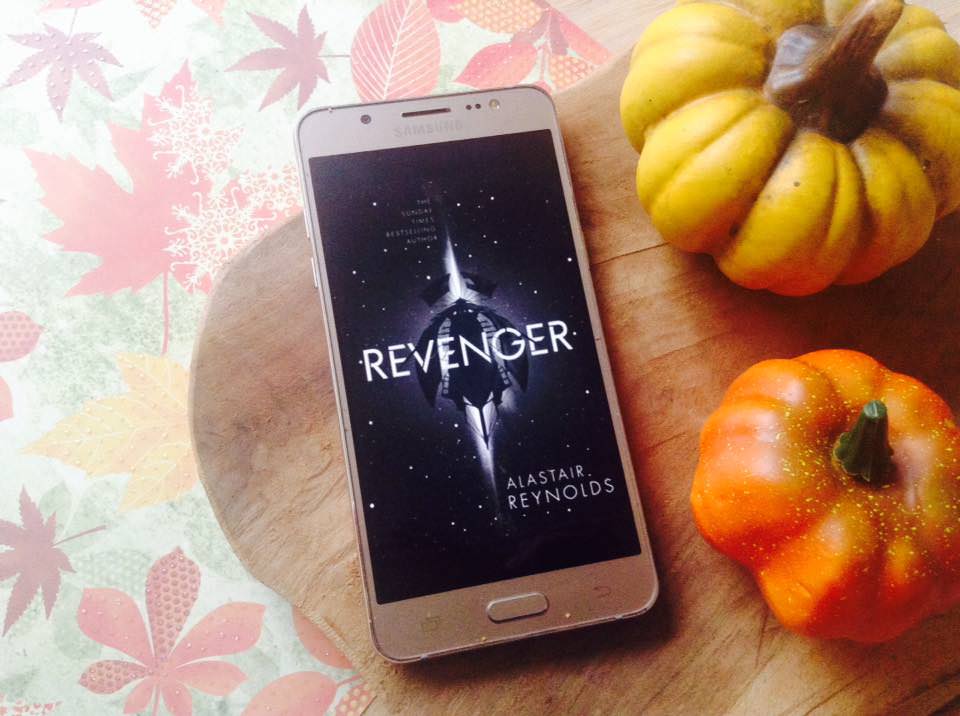 The galaxy has seen great empires rise and fall. Planets have shattered and been remade. Amongst the ruins of alien civilizations, building our own from the rubble, humanity still thrives.
.
And there are vast fortunes to be made, if you know where to find them.
.
Captain Rackamore and his crew do. It’s their business to find the tiny, enigmatic worlds which have been hidden away, booby-trapped, surrounded by layers of protection–and to crack them open for the ancient relics and barely-remembered technologies inside. But while they ply their risky trade with integrity, not everyone is so scrupulous.
.
Adrana and Fura Ness are the newest members of Rackamore’s crew, signed on to save their family from bankruptcy. Only Rackamore has enemies, and there might be more waiting for them in space than adventure and fortune: the fabled and feared Bosa Sennen in particular.

Revenger was a surprising action-packed space adventure, a thing I wasn’t expecting after the first few pages.

The story starts off with two sisters. One of them that wants to go aboard a ship as a bonereader, taking her sister along with her. Her goal is to earn money to pay off their father’s debts. Every ship has an alien skull aboard, used to communicate with other ships and to pick up transmissions between ships. Only a few can do this though which is where bone readers come in.

As you can tell the world building is very interesting just from that tidbit. It is also the weakest part of the story. The story focuses on a lot of the action and the changes our character goes through, but the author forgets to put some focus on the world building in places. We are in the 1700’s. Now I assumed this was counted from the day they left Earth. Later on I learned this was counted from the start of an occupation. I can take a good guess at what the occupations are, civilizations that thrived at the time, but none of this is properly explained. And there are other examples. Saying that the current occupation has no idea about a lot of its history isn’t an excuse for lazy world building.

Having said that, that is about the only part of this story that bothered me. If you start this story buckle in because you are in for a wild ride. The action keeps on coming with some (small) stops along the way to catch a breather here and there. But then we head right on back. Once you are hooked it doesn’t back off.

I’m not as attached to the characters as I would have liked to be. I think that has more to do with the events that happened after a 100 pages where I was getting attached and my heart got broken. Thanks Reynolds. Thanks a lot. It made me careful to form attachment with the remainder of the characters. But even so I do like Fura. She does what she needs to do. She does the best she can in a difficult situation. Just because she is young doesn’t mean she can’t do any of these things (as I’ve seen others suggest). Her sister Adrana was a bit flaky. Rackmore was brilliant. Prosor I didn’t like at first but as we got to know her more it was clear she was just very damaged.

I think this world still has so much left to discover and I don’t think Fura is quite done yet either. I can’t wait to see where Shadow Captain will be going…