October! My birthday month. The month I left the 3 0 behind. Despite that and all the books and cake it wasn’t quite the month I wanted it to be. 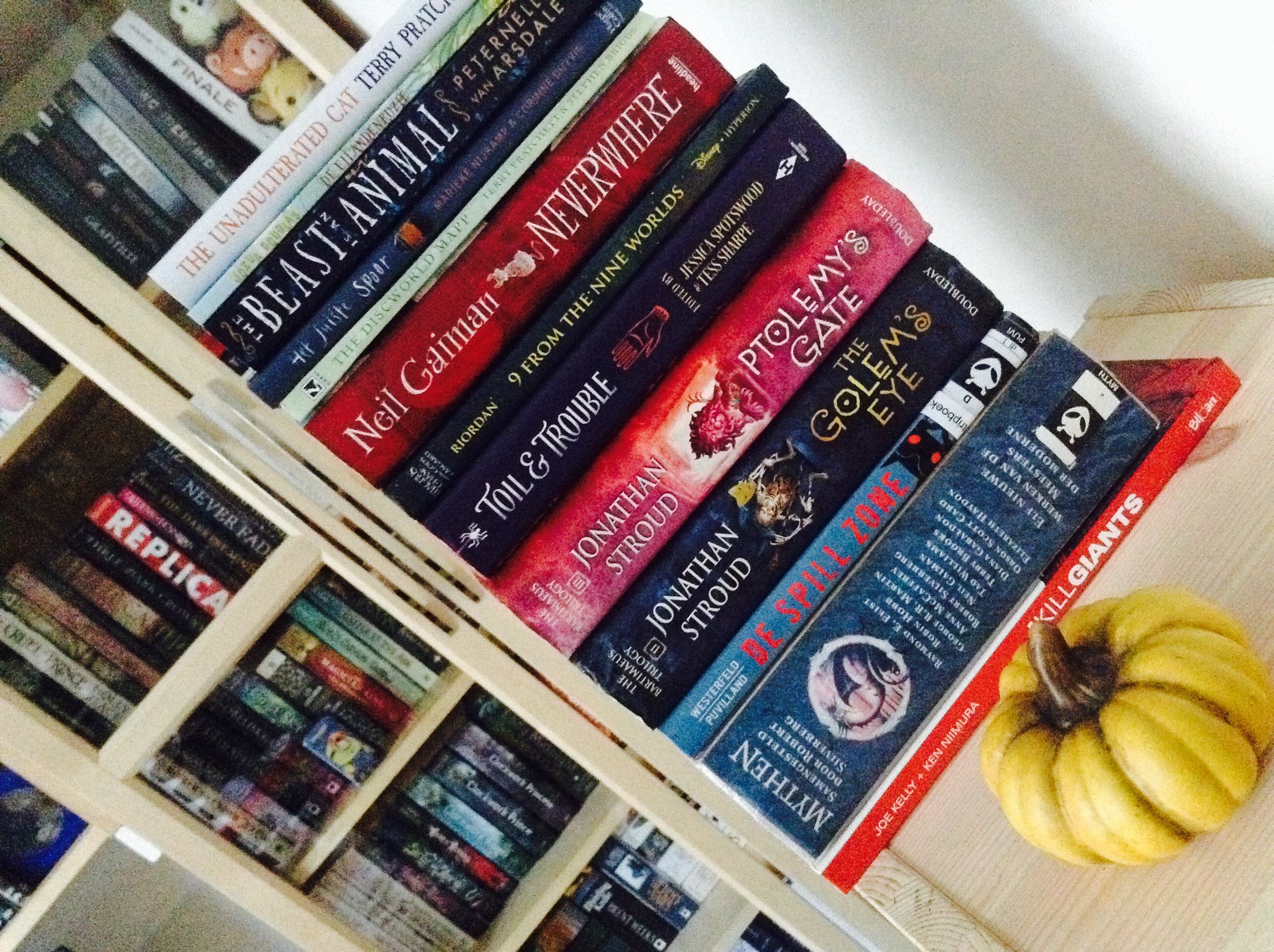 I read the Discworld Mapp but since it is so short and mostly map I’m for a change not counting it towards my goal haha.

⌘ So as mentioned in my last monthly wrap up, in the last weekend we went to an escape room. But as it was the night before my wrap up posted I couldn’t update it anymore. Husband and I went with my sister in law, brother in law and his girlfriend. First we went out to dinner with his parents and Merijn too. After that his parents took Merijn to our house to put him to bed and stay while we went to the escape room. It was a lot of fun. The escape room was in one of the towers of our city. We had an hour to solve the riddle. It was harder than we thought it was going to be and we stuck in one area to long so we didn’t end up making it to the end. Such a shame. But I think we might be doing this again in the future.

⌘ Then the next morning we were so tired that we slept longer than normal. Merijn was not having it and managed to climb out of bed with his sleeping bag on and came to wake us in our room haha. Cutie. But seriously how do you mange to climb out of bed with a sleeping bag on? At first he used the chair and I was able to move that so we had a few more weeks of bliss but halfway through October he just threw himself over his bed railing. He stopped taking his naps at this point too. We ended up changing his bed to an open one and he is doing well sleeping there during the night for the most part but his naps haven’t come back

⌘ We wanted to go to Ikea in the second full weekend of October but when we pulled into the highway my husband’s car started doing weird things and stopping. We could stay out of harms way and managed to push the car to a parking lot once we were of the highway. But then I hadn’t taken my phone and husband didn’t have any money left on his and there we were. We managed to find someone who would let us use their phone to make a call. All in all we were under way from 9.00 to 12.00 and never made it to Ikea. Such a fun way to spend the Sunday morning. Not.

⌘ I don’t want to go too much into it but I haven’t been doing so well. I got my antidepressants upped again and asked for a referral to the psychologist (I had an intake convo already). That in combination with Merijn not napping and having temper tantrums because he is two and over tired leaves me with not a lot of room to do a lot of things and I am a bit on edge. Maybe this will show in my blogging schedule next year. We’ll have to see.

⌘ I had my birthday yeay. Lol. As you can tell it is hard to get excited about things. I did finally get a hair cut and got my hair colored again. Something I had been putting off for months and months.

⌘ The last few days of October Merijn stayed at my parents to give me a bit of a break. That way I could finish some blog posts and read some more books as you might have seen from the amount that I read. Otherwise it wouldn’t have been so high. There are also some shorter books in there though.

⌘ Unwritten by Tara Gilboy
⌘ Rejoice, a Knife to the Heart by Steven Erikson
⌘ Heksenhoeve by An Janssens (Dutch Author)
⌘ Sugar Spells (Spellwork Syndicate 2) by Lola Dodge
⌘ How to Fracture a Fairytale by Jane Yolen
⌘ The Beast is an Animal by Peternelle van Arnsdale
⌘ The Librarians and a Pot of Gold (Librarians 3) by Greg Cox

Other Posts
Dancing Out of September 2018 / Book Haul #37 – In Which I Continued to Sin / Time to Get Your Spook On – Spook-a-Thon 2018 TBR / How I Make a Blog Schedule / Book Shelf Tour 2018 – Manga Upstairs + Overview New Shelf Downstairs / How Well Does Goodreads Know Me? / Dreamy Book Covers /  Unboxing – Letters & Lights Halloween Box / #15yearsbartimaeus – The Golem’s Eye SPOILER Discussion / Five Books to Read for Halloween If You Liked Frankenstein / #RRSciFiMonth 2018 Intent Participation /Book Haul #38 – I turned 31 and All I Asked for Were Books/ The Hound of the Baskervilles – From Nightmares to Favorite / Unboxing – Spook-a-Swap 2018

⌘ Once Upon a Time / Season 6 / Ep 13-16
Still finding it hard to focus on this show. It just doesn’t feel like the first few seasons anymore.

⌘  Nancy Drew / Movie
This was cheesy but nice for to watch for a change.

⌘  Supernatural / Season 12 / Ep 9 – 23 / Completed
While Merijn was at my parents I took the time to finish this season because otherwise it was going to take me a long time. Is this the best season, no. But it was entertaining, for the most part I guess…

⌘ Criminal Minds / Season 14 / Ep 1-2
I haven’t followed this show every season but I know a decent amount about the characters. Since they just started showing this season here I figured I could jump in. 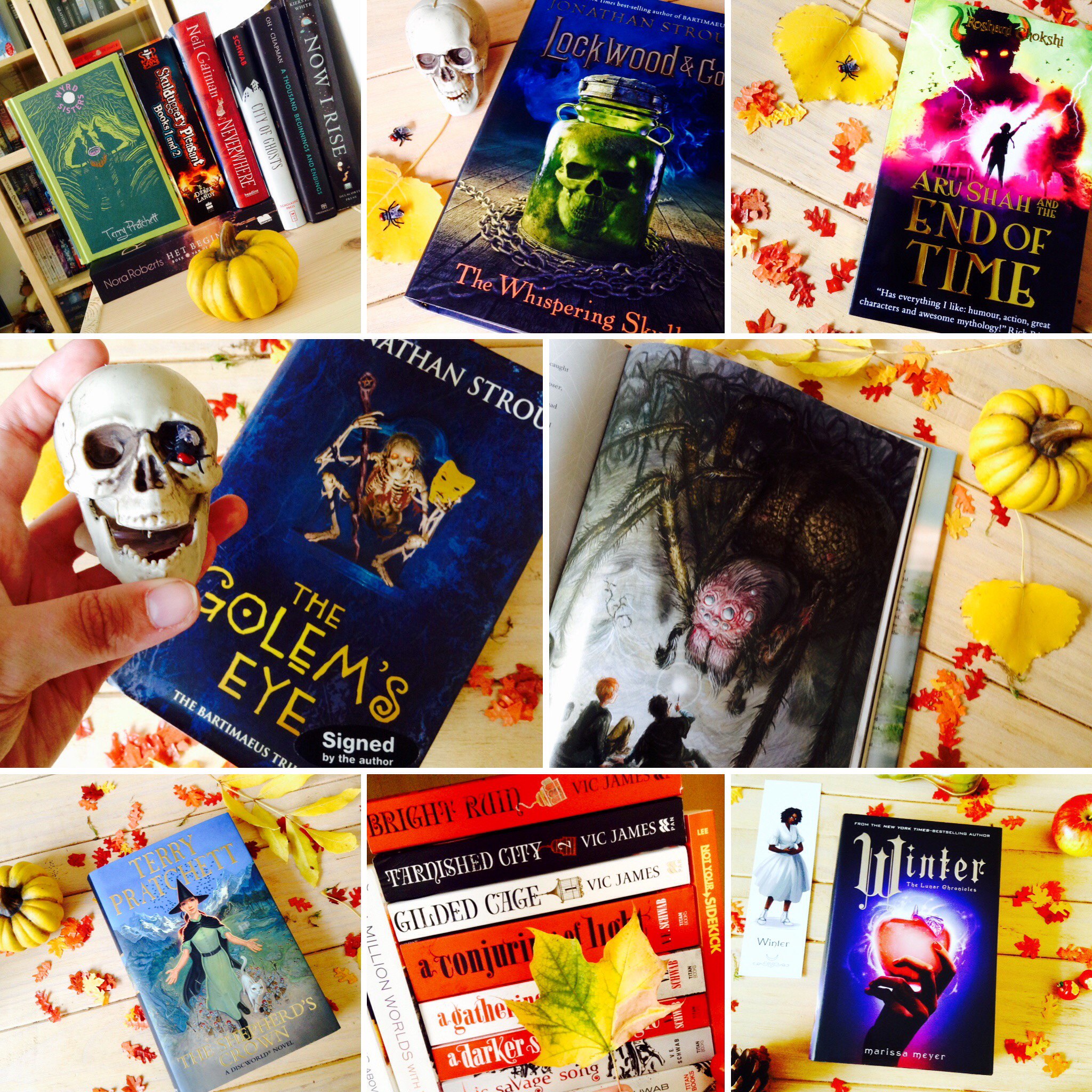 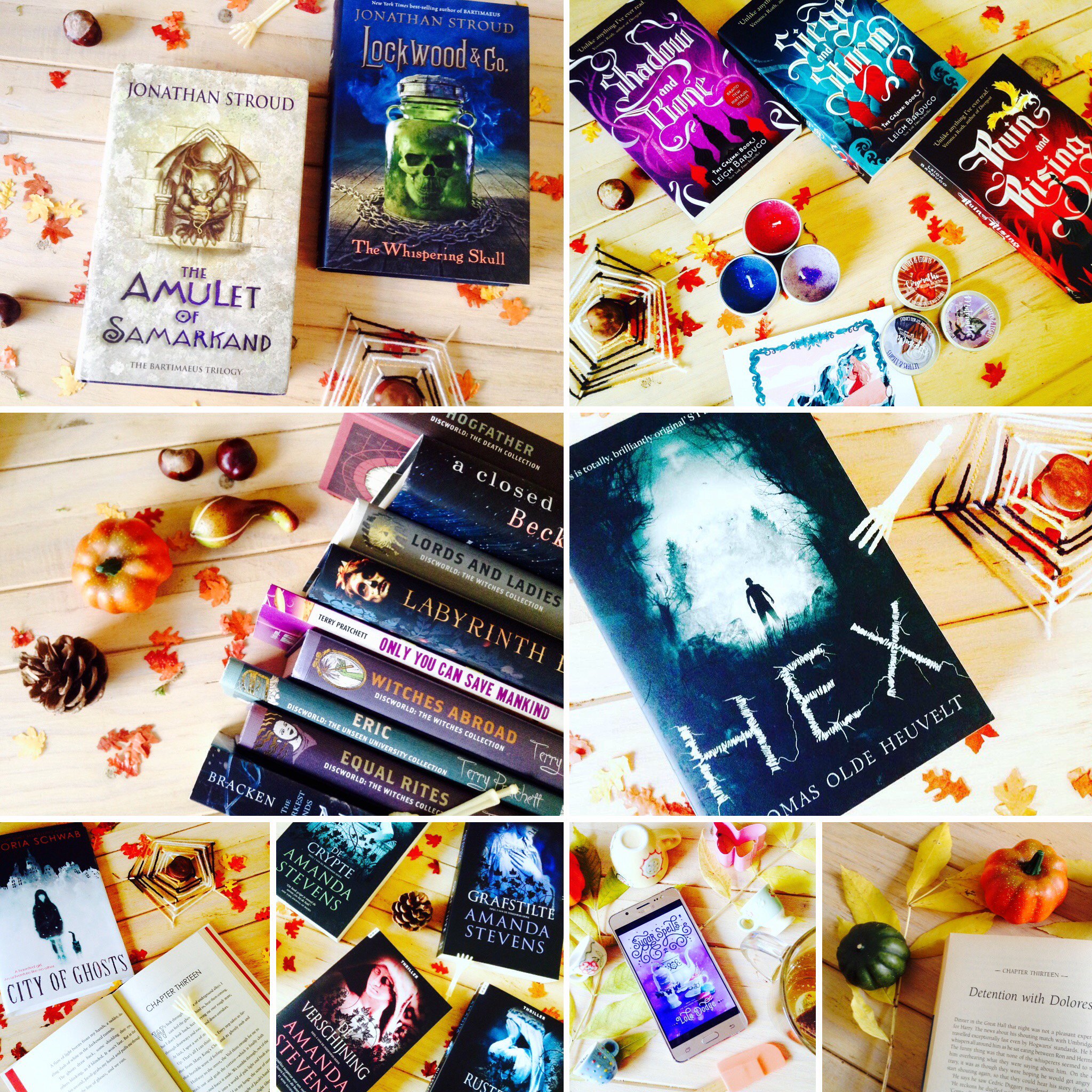 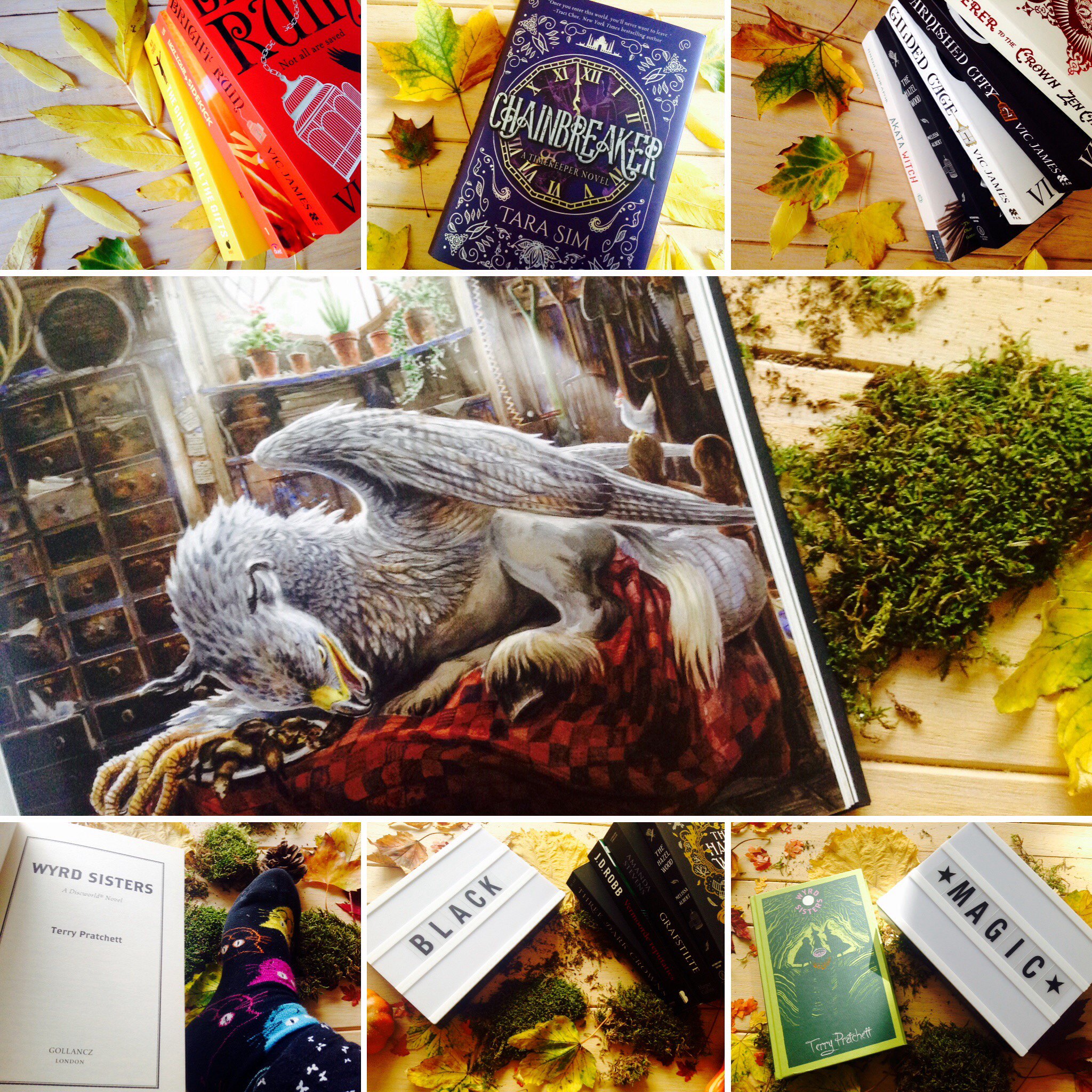 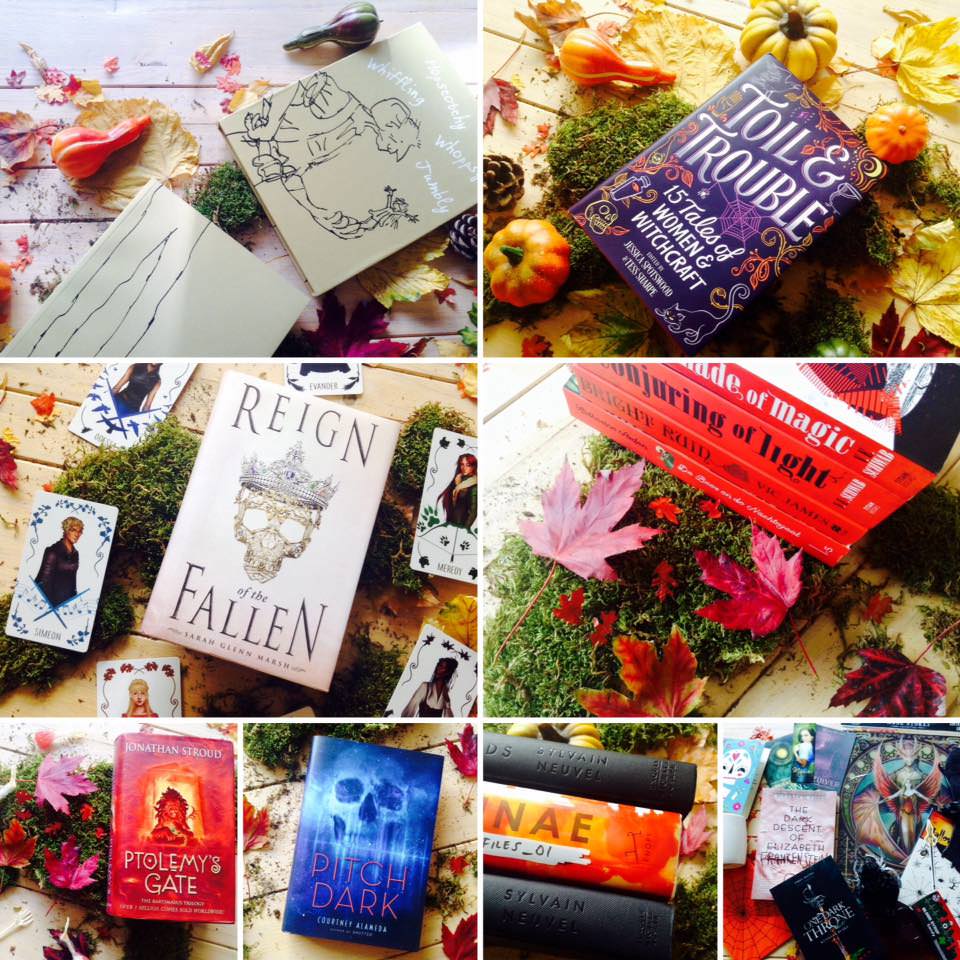 ⌘ Jamie from the Perpetual Page-Turner shares Halloween & Fall Books for Toddlers.
⌘ For Shattering Stigmas Kat from Novels and Waffles guestposted at Drizze & Hurricane Books about Dungeons & Dragons & Depressions.
⌘ Mishma from Chasing Faerytales shares 50 Asian Fantasies and Fantasy books with Asian Characters.
⌘ Jolien from The Fictional Reader talks about how fanfiction has saved and carried her love for Harry Potter.
⌘ Aimal from Bookshelves & Paperbacks talks about coming to value hard work in books.
⌘ As you know I’ve been doing the bartimaeus readalong and there have been two responses to The Amulet of Samarkand spoiler discussion. La La in the Library / Death by Tsondoku.
Pages Unbound shares what order you should read Tolkien’s books in. 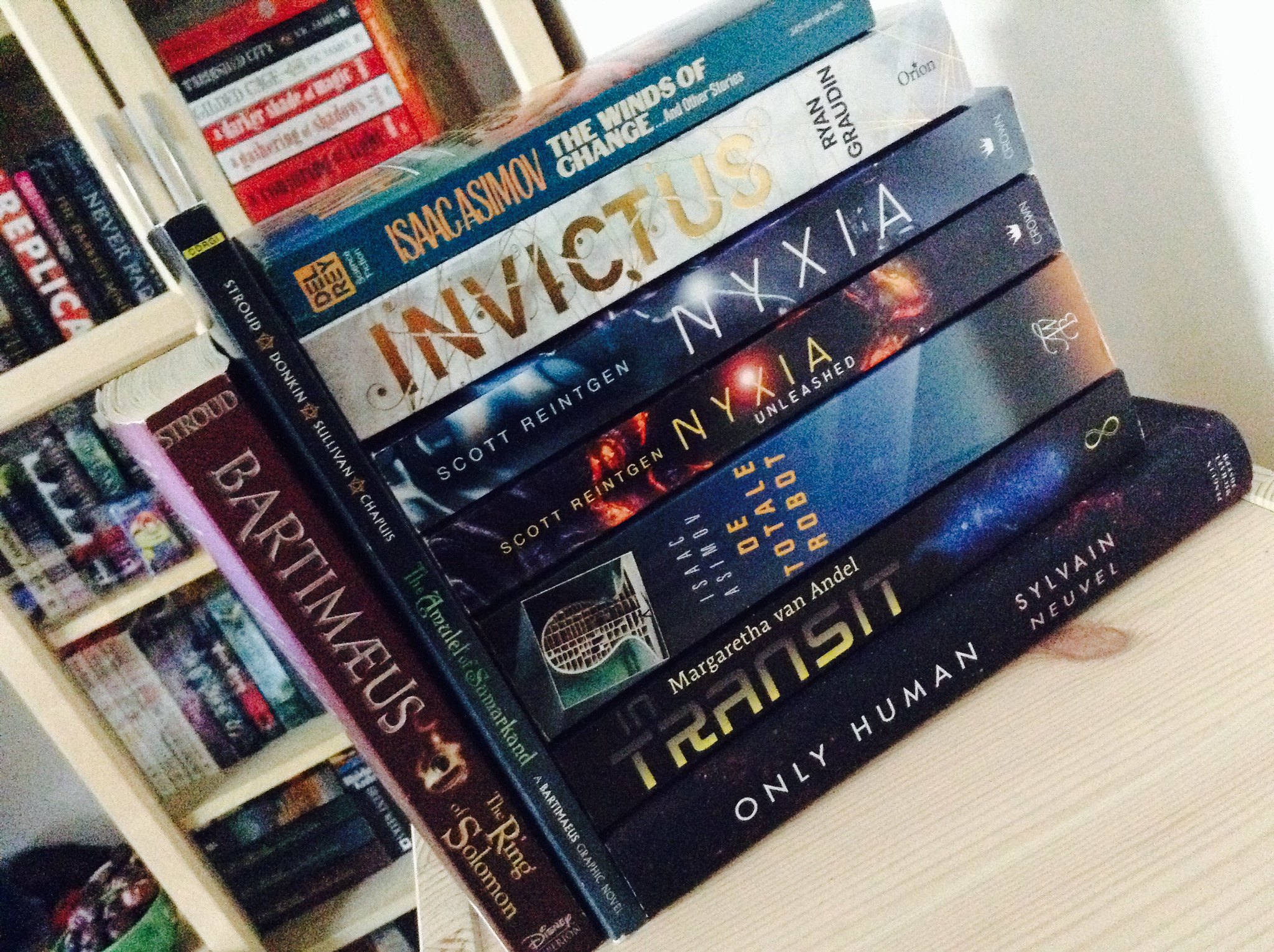 ⌘ Next month is sci-fi month so I am going to attempt to read some sci-fi. But I also have to read the books to finish the Bartimaeus readalong and some review copies so we will see how far I get with how Merijn is and the treatment surrounding depression.