November first and Sci-Fi Month has started! For a change I decided to start the month with a tag. But not just any tag. The Try a Chapter tag. I am going to let it loose on my sci-fi tbr for this month, see what catches my attention and what I am starting with first. 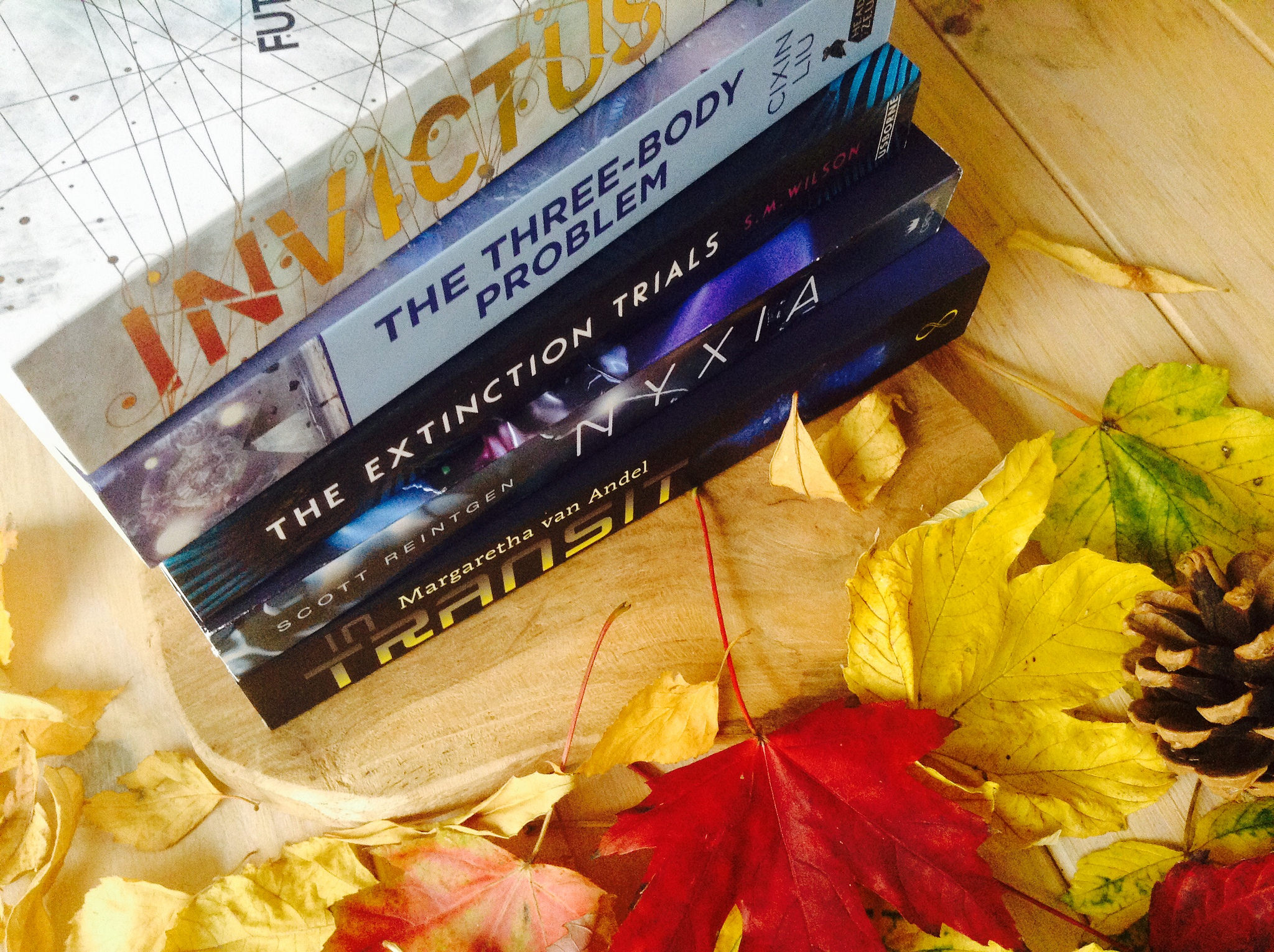 Farway Gaius McCarthy was born outside of time. The son of a time-traveling Recorder from 2354 AD and a gladiator living in Rome in 95 AD, Far’s birth defies the laws of nature. Exploring history himself is all he’s ever wanted, and after failing his final time-traveling exam, Far takes a position commanding a ship with a crew of his friends as part of a black market operation to steal valuables from the past.
.
But during a heist on the sinking Titanic, Far meets a mysterious girl who always seems to be one step ahead of him. Armed with knowledge that will bring Far’s very existence into question, she will lead Far and his team on a race through time to discover a frightening truth: History is not as steady as it seems.

In the year 2275 Rheyn B-71 and Levya C-35 decide to visit the Grauwers during their vacation as a sort of celebration to graduation. Grauwers are apes who resemble homo sapiens a lot. But when they visit they start to doubt these are really apes when they wear clothes and live in houses. Are homo sapiens really extinct?

Emmett Atwater isn’t just leaving Detroit; he’s leaving Earth. Why the Babel Corporation recruited him is a mystery, but the number of zeroes on their contract has him boarding their lightship and hoping to return to Earth with enough money to take care of his family.
.
Forever.
.
Before long, Emmett discovers that he is one of ten recruits, all of whom have troubled pasts and are a long way from home. Now each recruit must earn the right to travel down to the planet of Eden—a planet that Babel has kept hidden—where they will mine a substance called Nyxia that has quietly become the most valuable material in the universe.
.
But Babel’s ship is full of secrets. And Emmett will face the ultimate choice: win the fortune at any cost, or find a way to fight that won’t forever compromise what it means to be human.

In 1967, physics professor Ye Zhetai is killed after he refuses to denounce the theory of relativity. His daughter, Ye Wenjie, witnesses his gruesome death.
.
Shortly after, she’s falsely charged with sedition for promoting the works of environmentalist Rachel Carson, and told she can avoid punishment by working at a defense research facility involved with the search for extraterrestrial intelligence. More than 40 years later, Ye’s work becomes linked to a string of physicist suicides and a complex role-playing game involving the classic physics problem of the title.

Betrayal. Sacrifice. Survival.
Welcome to the Extinction Trials.
.
In Stormchaser and Lincoln’s ruined world, the only way to survive is to risk everything. To face a contest more dangerous than anyone can imagine. And they will do anything to win.
.
But in a land full of monsters – human and reptilian – they can’t afford to trust anyone. Perhaps not even each other…

So I started the first bit of The Three-Body Problem and I didn’t finish the chapter. Not because it isn’t good but because with my current mental health I knew I would have a hard time focusing on this book that starts with some of China’s revolutions.

With Invictus I only read the prologue and not the first chapter but it was already enough to get my attention. The idea of time travel and the birth of a child grabbed me and I am curious to see where this story will go.

Next was The Extinction Trials. The first chapter was only a page and a half and didn’t touch on the trialls or the dinosaur’s.

And lastly was Nyxia. There aren’t real chapters in this book. But more different time points from what I can see. Even so. The first real scene in that was a few pages long and interesting enough to grab my attention. It lays out why our main character is jumping into the offer being made and what that offer is. And still leaves a lot of things open to discover.

I have decided that from these five I will be reading In Transit first. The cliffhanger and the easiness to get into this book is what I need right now. After that I am going to go with Invictus as I am interested and it is a standalone as In Transit is. After that I want to have a go with Nyxia and its sequel (if I am feeling it).

While I think I might like The Three-Body Problem my mental health would stop me from being able to fully grasp and concentrate on this story. I think that would be a shame. So I am going to push it to next year when I hopefully will feel better. The Extinction Trialls didn’t offer enough to interest me. If I have time this November I might pick it up. However there is a good chance I’m going to push it back to next year as well.