As I was laying in bed one night I was thinking of Halloween and ended up putting on an older tv movie of The Hound of the Baskervilles. Most of you will probably know that this is a Sherlock Holmes book by Sir Arthur Conan Doyle.  It takes place outside of London at Devon moorland. When Sir Charles Baskerville is found dead, it is placed on the family curse. The legend of a supernatural hound. With the heir of Sir Charles coming to take his place, Sherlock Holmes and Dr. Watson have to find out what is the truth and what is the story. 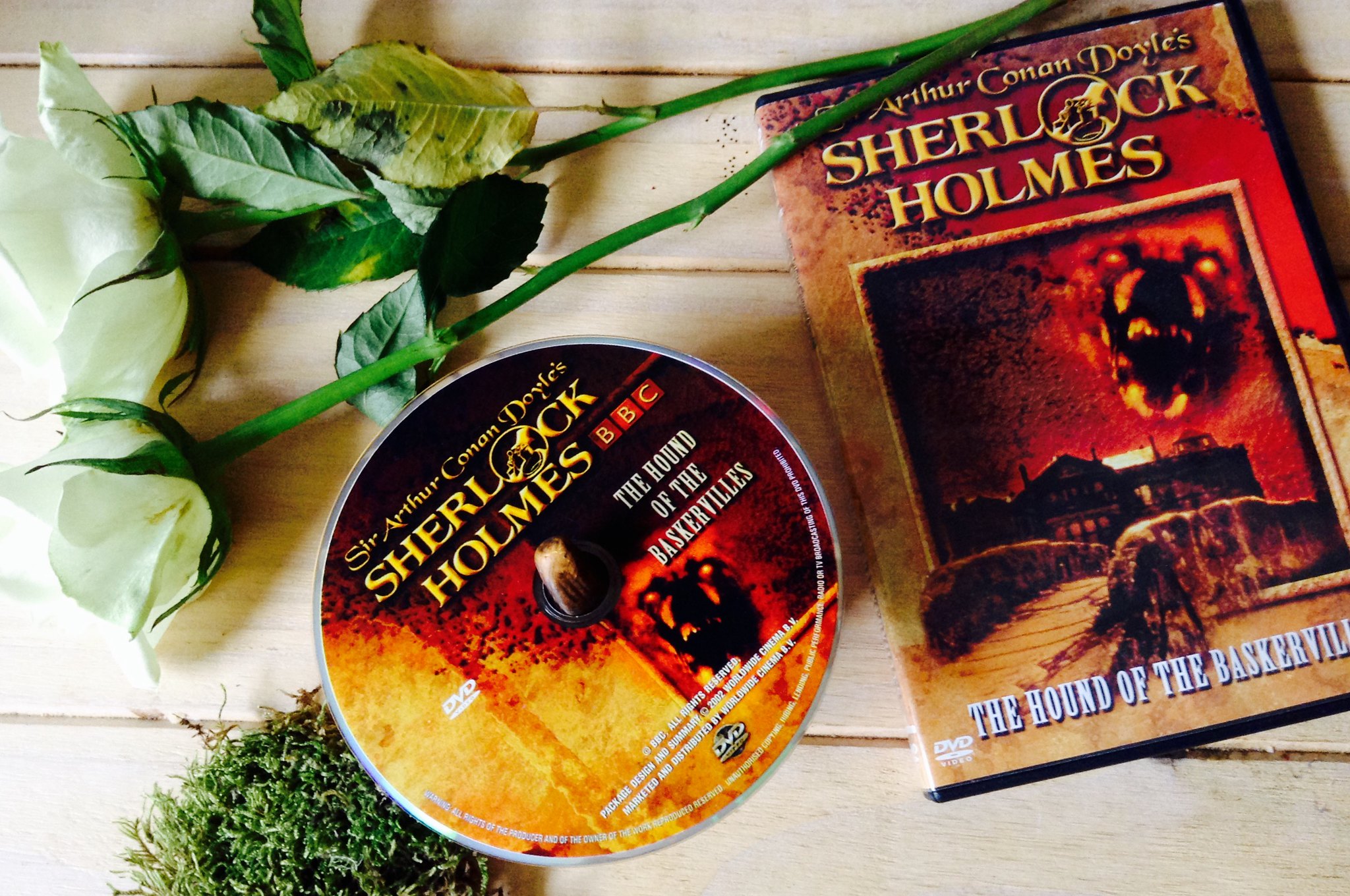 I think I was 9 or 10 when I was home alone one Saturday. My parents were working and as I often did at that age when I was alone, I browsed the tv stations for something to grab my interest when it was a dreary day out. That ended up being a tv movie called The Hound of the Baskervilles. At the time of course I had little idea that this was really a novel or how popular Sherlock Holmes was. I just saw a dog and was like: ‘cool’. I was very into dogs at that time, having gotten one of my own. A very cute maltezer called Minoes.

The movie was dark, atmospheric and quite frankly a perfect Halloween watch. I watched until the end and then put it out of my mind when my parents came home. Until night came around.

I couldn’t sleep right away and I hadn’t slept with a night light for a long time. But as I was looking to the shadows in my room I couldn’t help but feel frightened. Weren’t that the eyes of the hound that were watching me from that corner? I was so scared that I called out for my mom.

This continued on for a few weeks until it started to fade. Even so it took years for me to completely shake the feeling that there wasn’t a hound in the shadows of my room on nights where I couldn’t fall asleep easily. 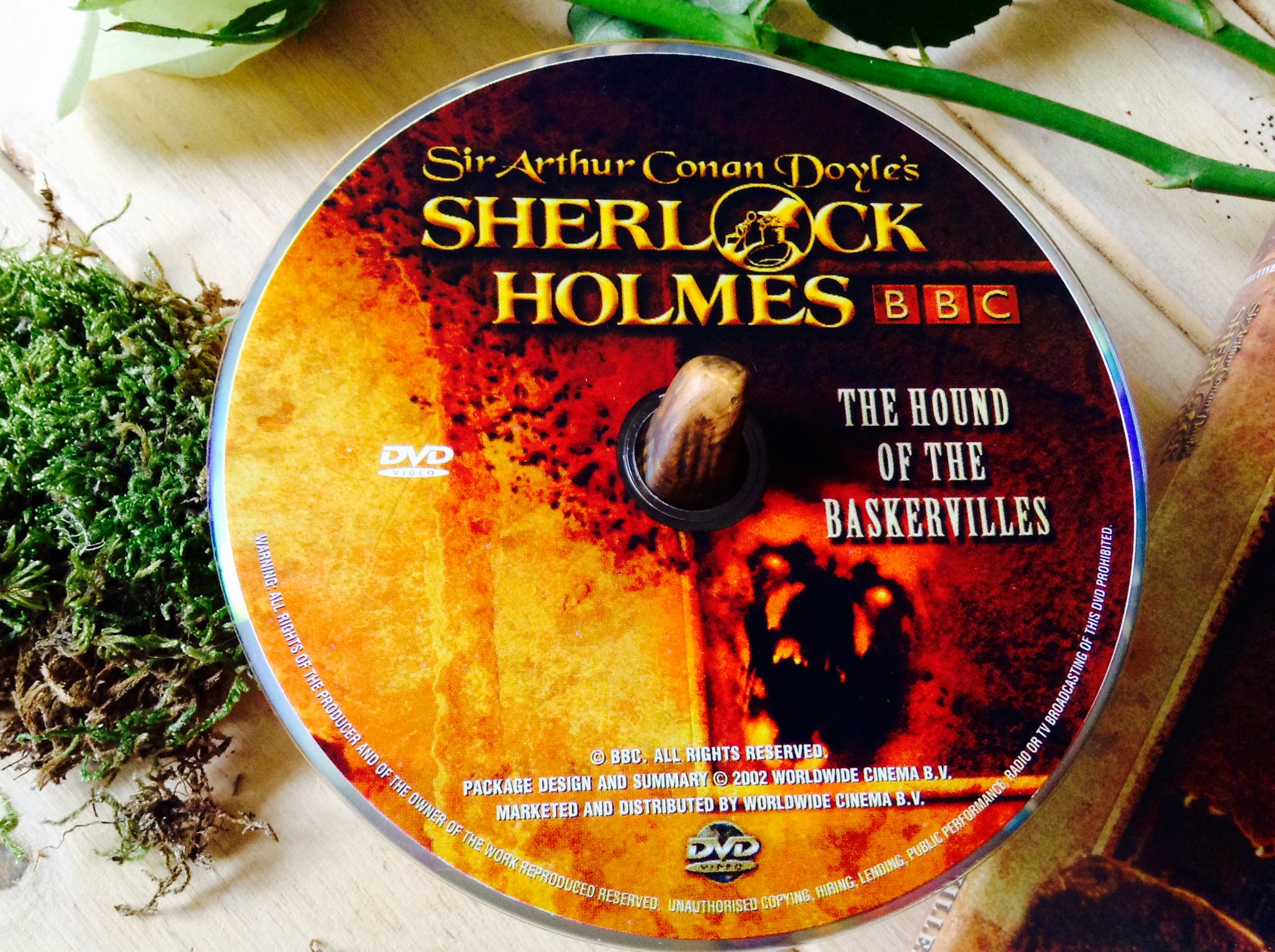 It took me many, many years before I saw the movie again. I never forgot my over active imagination or how the hound looked in my mind and I suppose that made me automatically stay away. Until the start of my twenties when i was browsing a dvd section and came across an old The Hound of the Baskervilles movie.

If it was the same one, I can’t tell you. I only really remember my own imagination. I ended up buying the movie and watched it during the day. And saw easily that this wasn’t that scary at all. Not to my adult mind.

A few years ago I finally read the Sherlock Holmes stories, and The Hound of the Baskervilles became my favorite of them all. I guess the story was already so familiar to me and the movies I had seen had all been such faithful adaptions, that it was almost like a reread. From then on out I have grown truly fond of the story.  I think I’ve watched the dvd over 50 times by now.

I think with my past with this story it has made me feel even more fond of it than I might have felt otherwise. There is a certain nostalgic feeling to it, even though the story obviously can’t scare me anymore like it did when I was young.

Do you have a history with a classic because of a movie adaption or some other reason?