I have to be honest and say that August was a month where I was very lucky when it came to hauling books. I’m not even talking about the amount of books I got but more how I acquired them. I’m not one to request physical copies from international  publishers but for two blog tours I participated in or am going to participate in I got a physical arc and a physical copy. And it made me realize how incredibly blessed I am for that alone. This isn’t normal for me (nor do I need it to be) so it just made me feel very thankful. 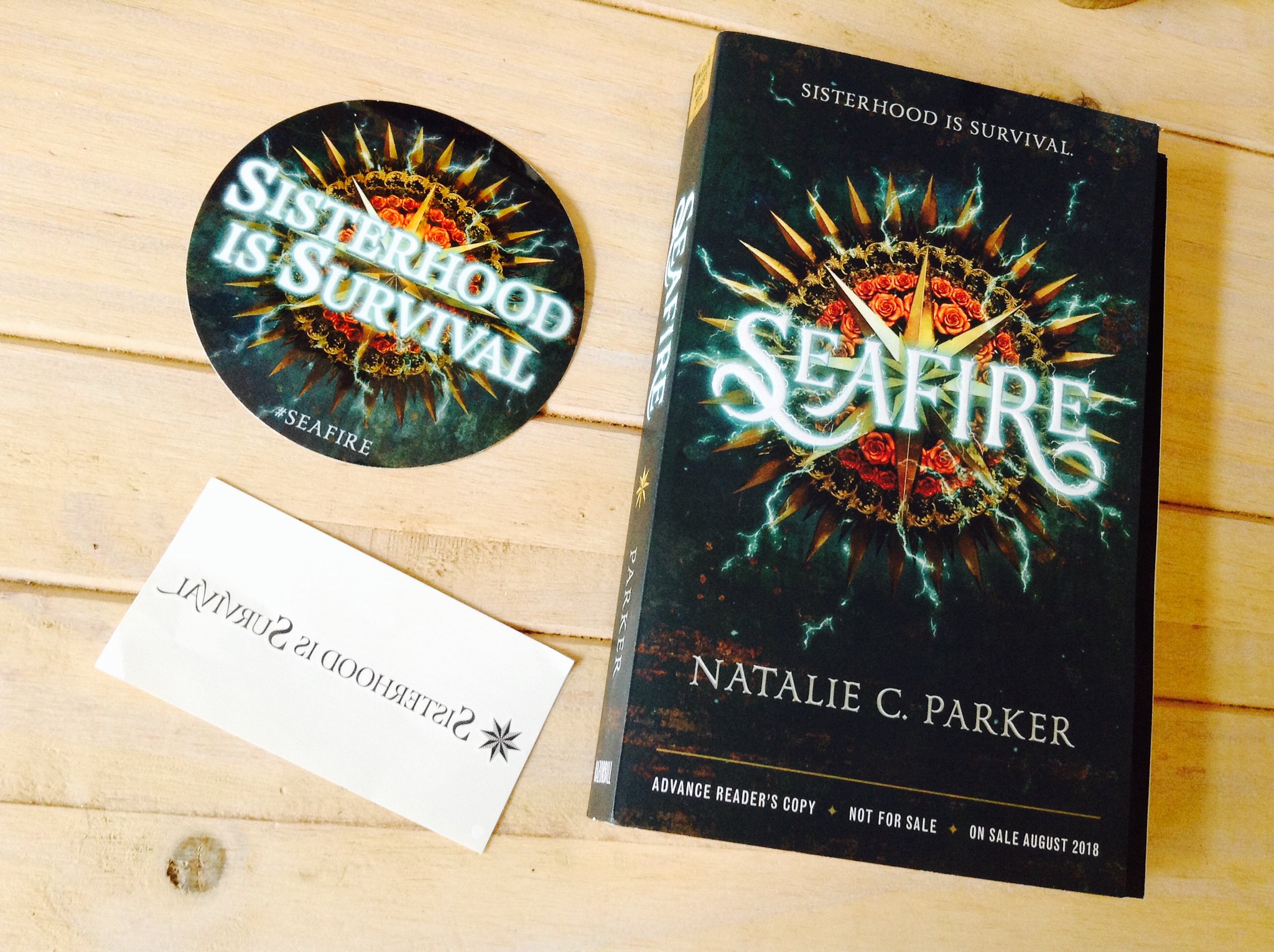 ★ Seafire Seafire (Seafire 1) by Natalie C. Parker +
Releases August 2018
Thank you again to Razorbill and Penguin House International for this gorgeous arc.
After having gotten the e-arc when I got on the blog tour I didn’t expect to get a physical arc. And yet here we are. Look at this beauty! My addition to the blog tour will be going up September 5th and the blog tour started the 27th. 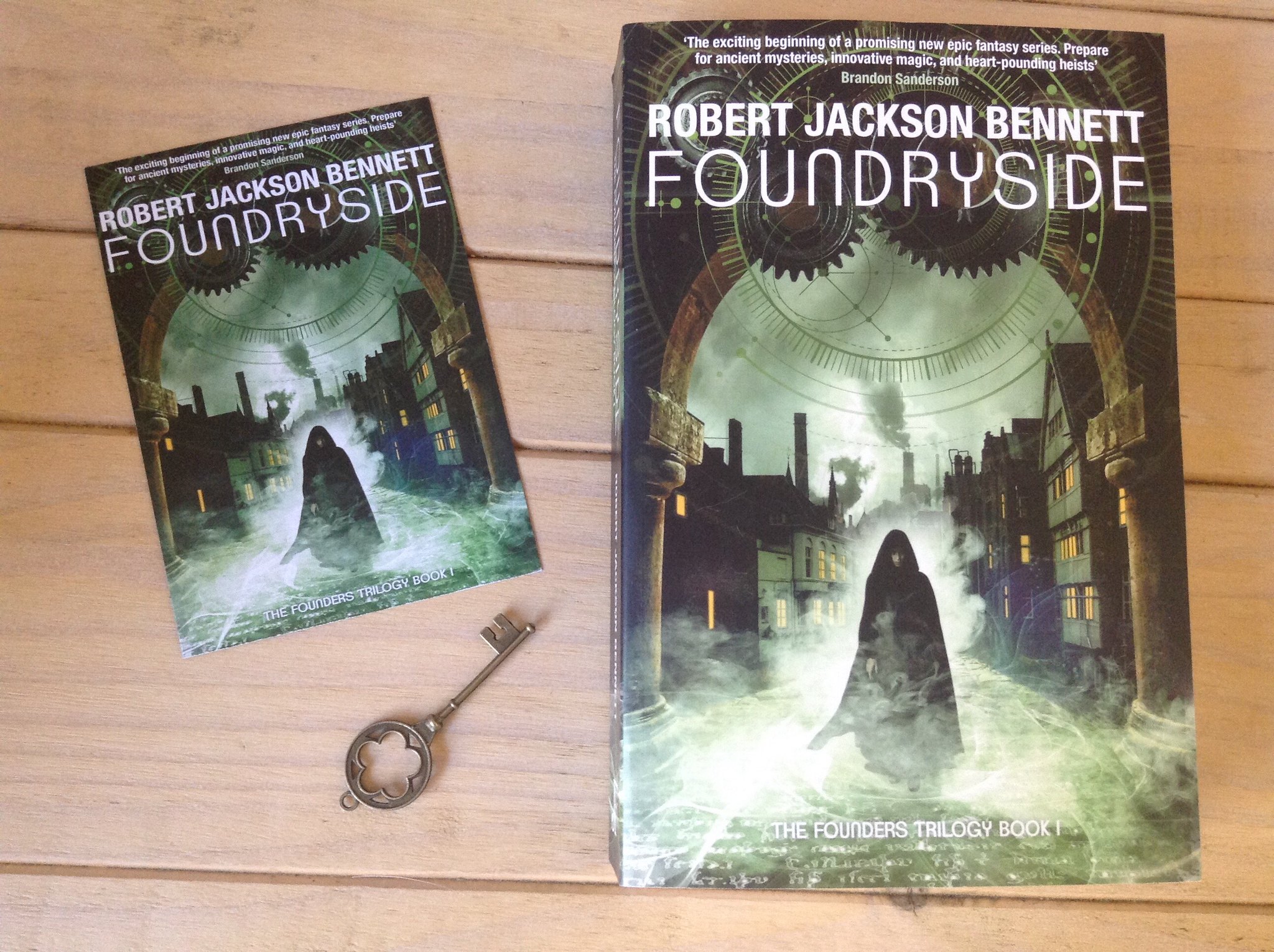 ★ Foundryside Foundryside (Founders 1) by Robert Jackson Bennett +
Releases August 2018
Thank you so much to Quercus and Jo Fletcher Books for this finished copy! ❤
You had no idea how happy I was to receive this and it being a finished copy. I kind of fell in love with this book when I read the e arc. But you’ll have seen my addition to the blog tour on August 23rd. 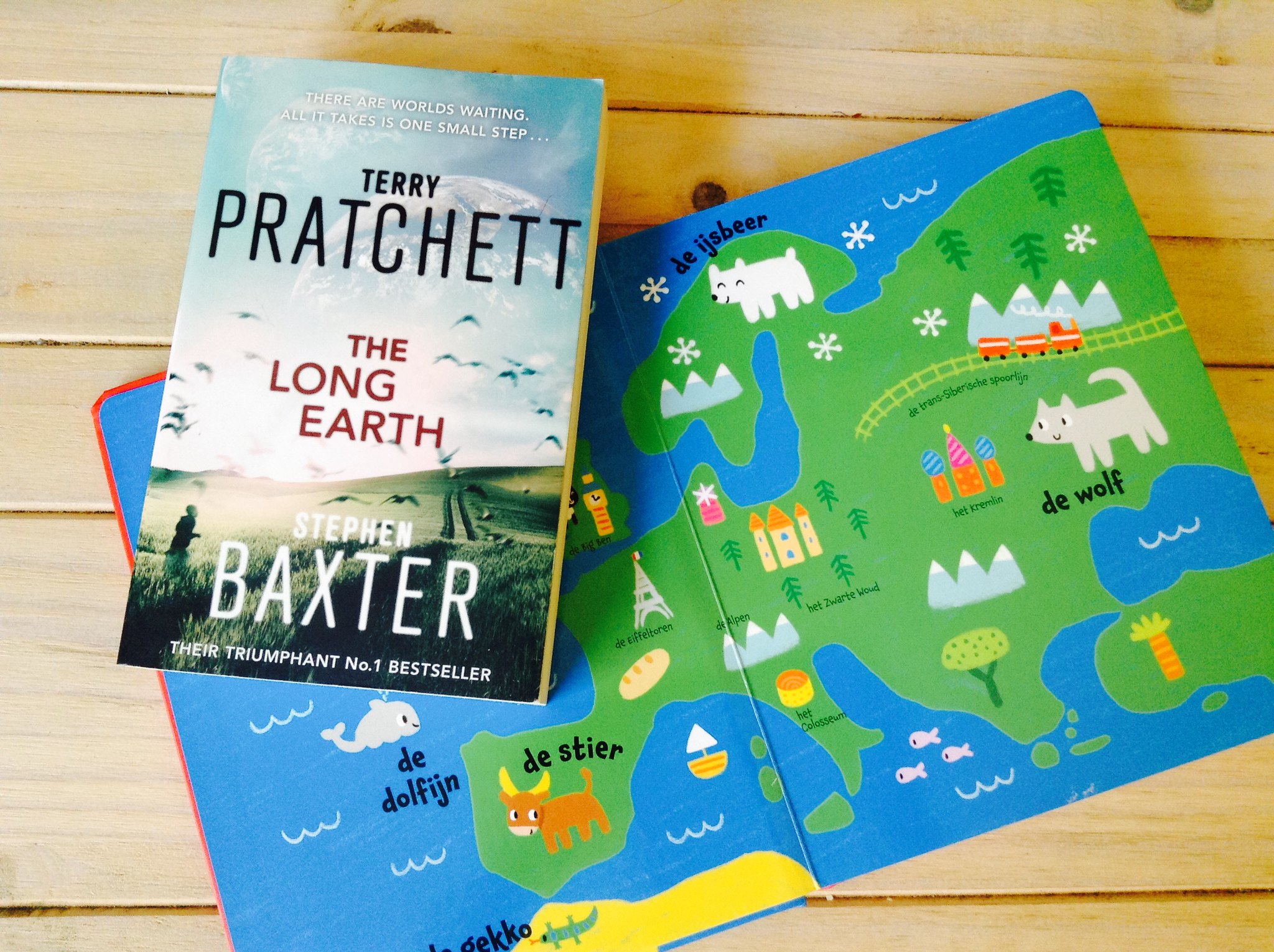 ★ The Long Earth (The Long Earth 1) by Terry Pratchett and Stephen Baxter
I have since long been very interested in this sci-fi series that Pratchett wrote with Baxter. I’ve heard mostly good things and well, it is Pratchett so this obviously had to be added to the collection. I swear I’m running out of space. I found this for 6 euro at a market in my city. 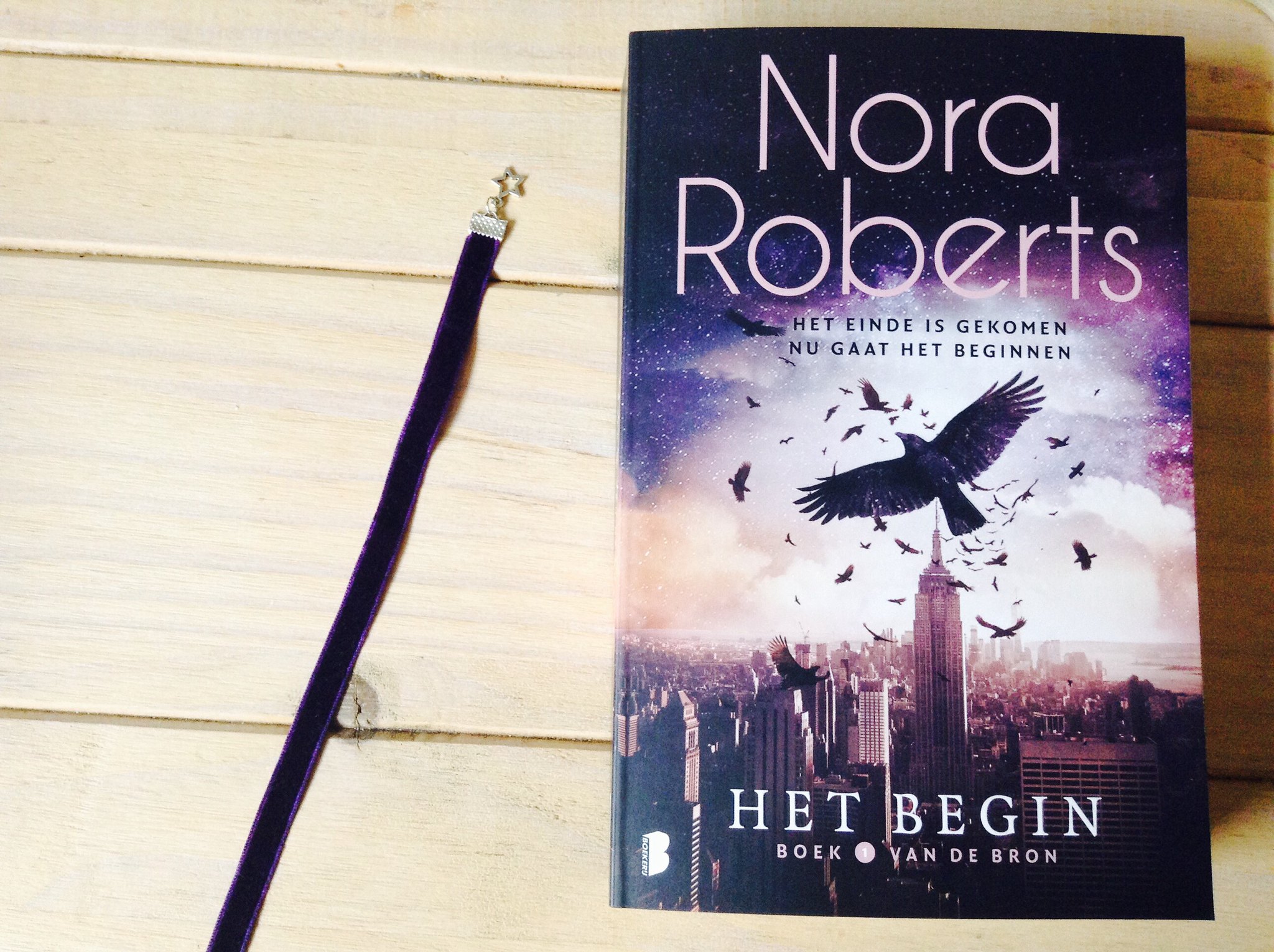 ★ Year One  (Chronicles of the One 1) by Nora Roberts
So this one was translated to Dutch which is what I had been waiting on. Initially I was going to wait on my library reservation but we came across it in the book store and husband bought it for me after my puppy eyes… I am really hoping to read this one in September/October. 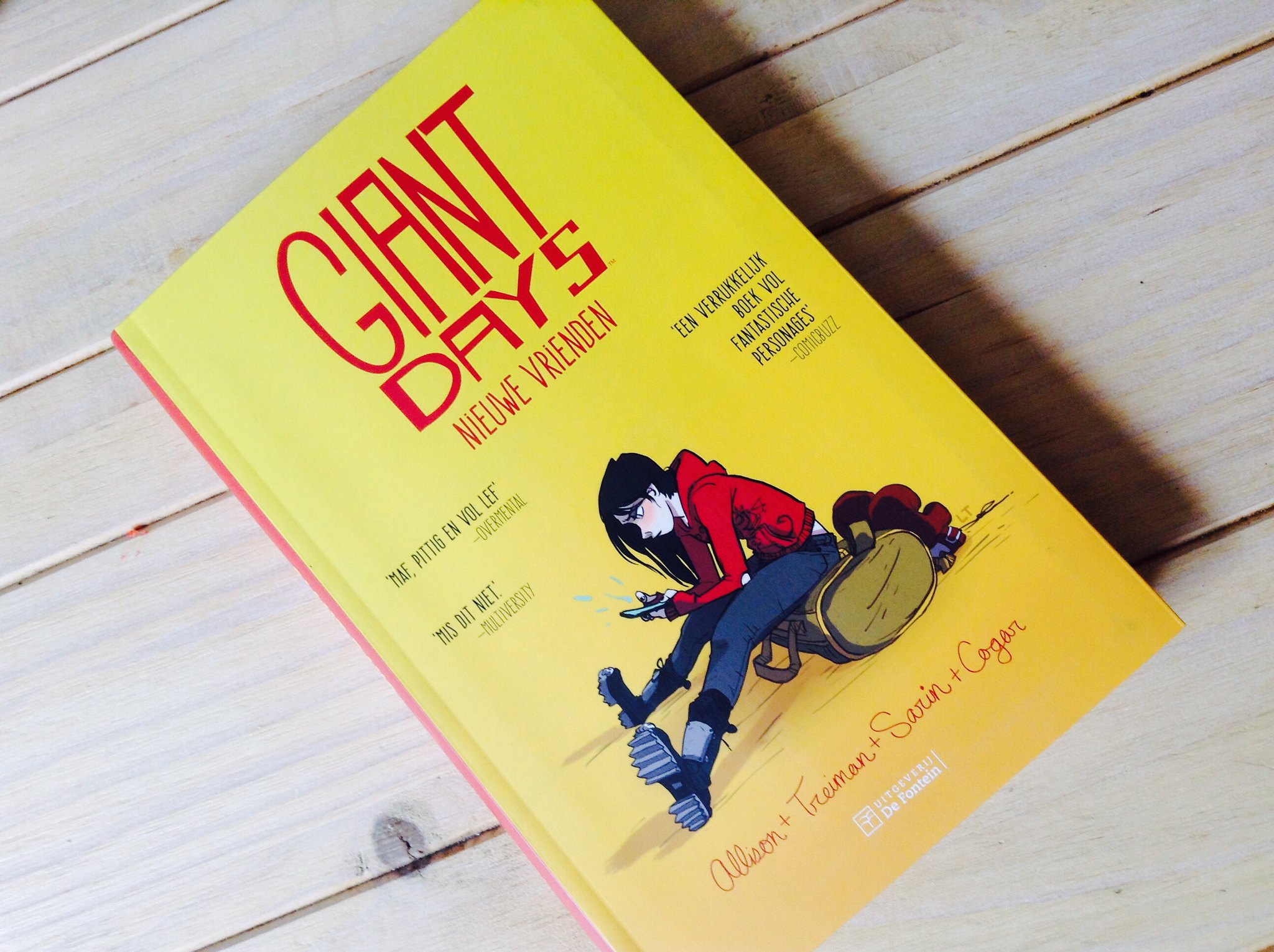 ★ New Friends (Giant Days 1) by John Allison +
So this is the Dutch translation of Giant Days. This bind-up has the first two volumes as translated in English so that is the first 8 issues for 15 Euro. Seriously, that is a steal Dutchies. And this is just so good, because, why yes I have read this already. ❤ 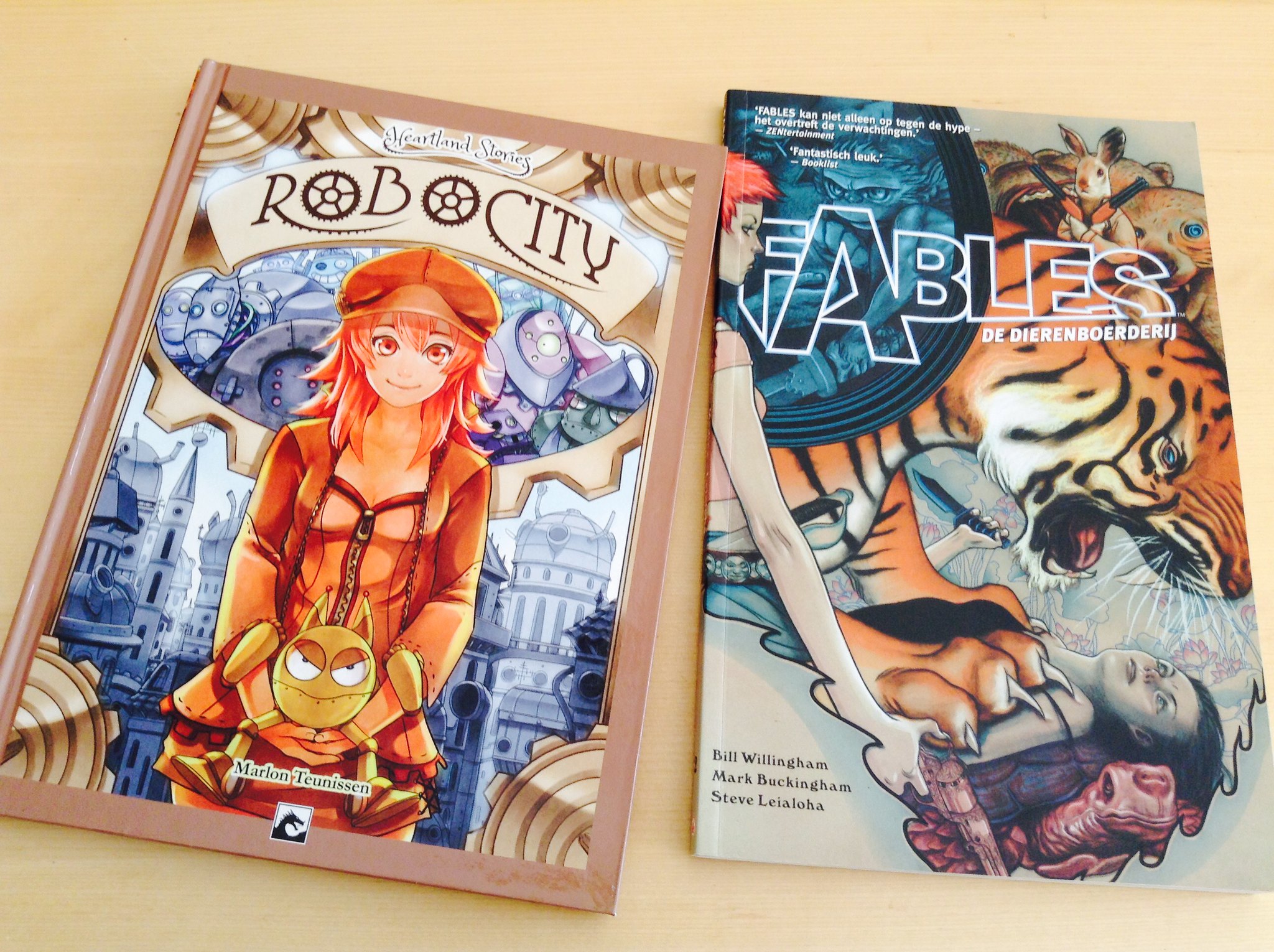 ★ Robocity (Heartland Stories 1) by Marlon Teunissen +
★ Animal Farm (Fables volume 2) by Bill Willingham +
On August 18th it was the Kampense Comic Fest that is held every year. This time it was the 20th edition. I always like to have a browse over it. And I found these two. Robocity I liked the look of and for the price of 5 Euro I picked it up. And from the same box and stand I found this one of Fables. Fables is normally pretty expensive to buy so I read some from the library deluxe editions. But finding this for 5 Euro, I could not pass that up. 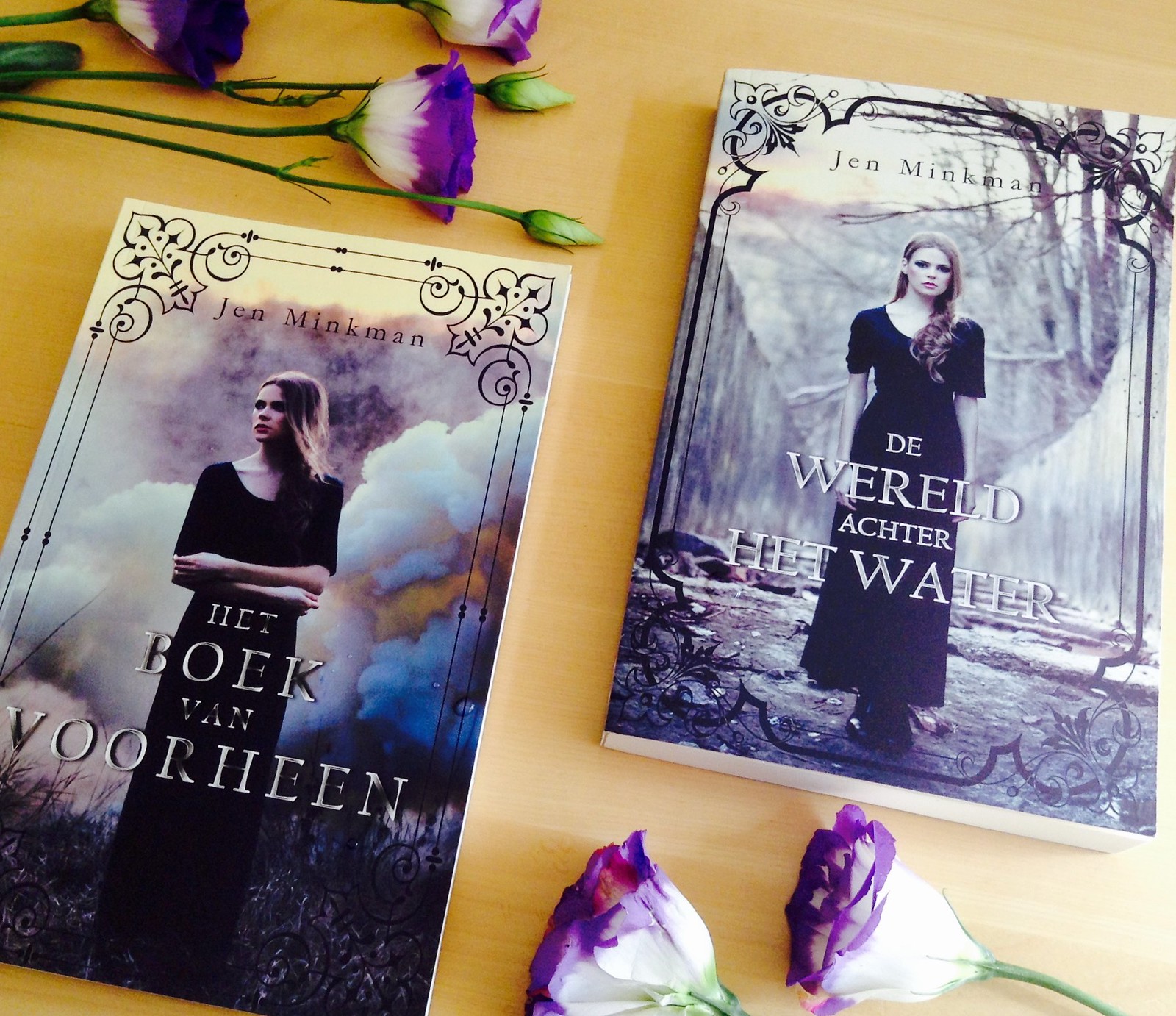 ★ Het Boek van Voorheen by Jen Minkman +
★ De Wereld Achter het Water by Jen Minkman  +
The author was selling the old copies for 10 euro each so I got them. I read them for review a while ago. 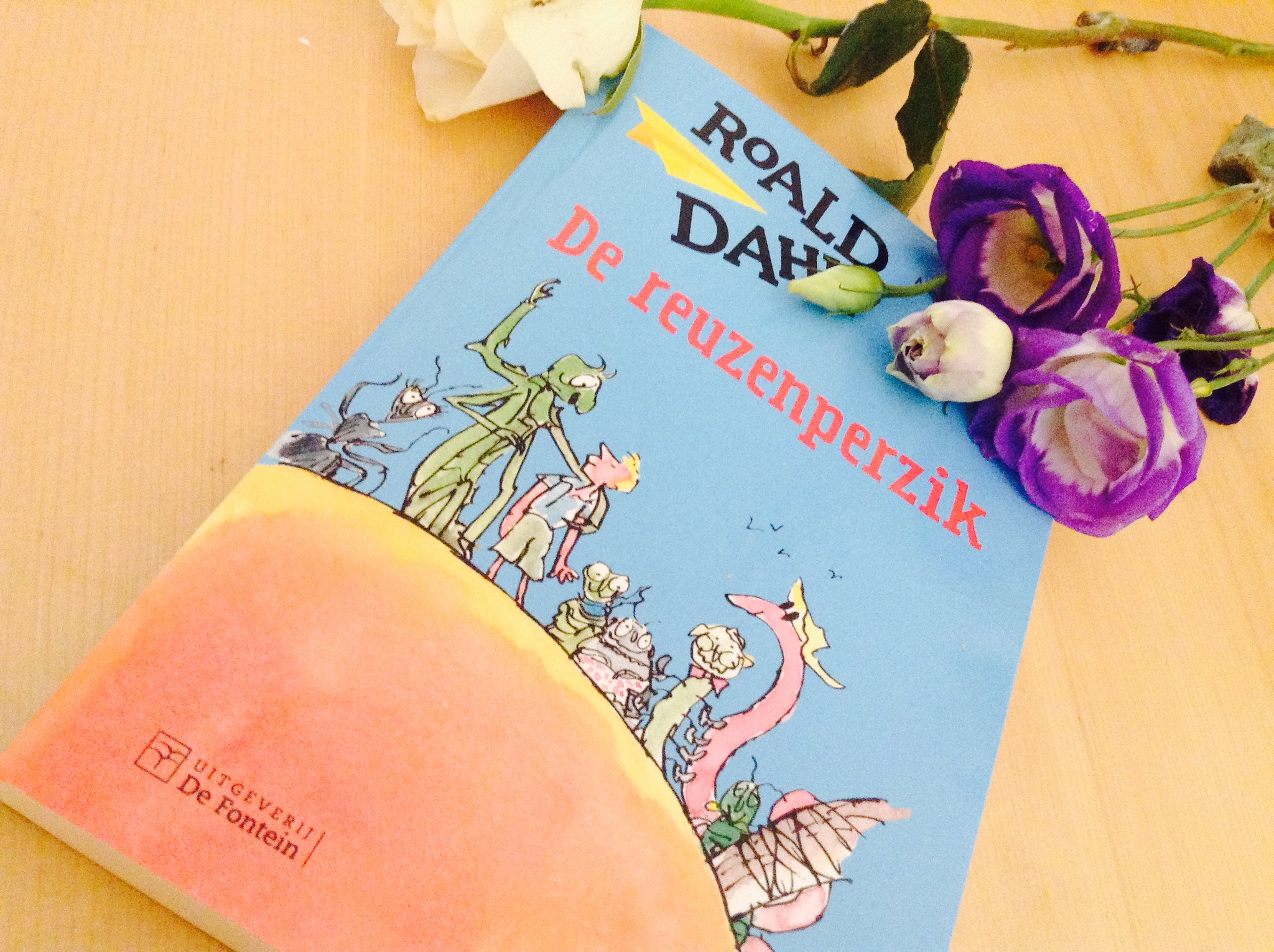 ★ James and the Giant Peach by Roald Dahl +
When my parents were here this week we went to the book store. My mom always wants to buy me a book but I couldn’t find anything I really wanted (I know, shocking) but then I saw this for my Roald Dahl collection. This is obviously bought with Merijn in mind.

Like last year it was the Deventer book market. This time on August 5th. I obviously hauled there as there was just so many stands that had fantasy for good prices. There are a lot of people that go with suitcases haha. But even so I still put some books back if I didn’t think it was the best price or I wasn’t a 100% on board. Husband commented on how these aren’t at all thin either. Which is true. I’ve also noticed that, with the exception of two, this is all adult fantasy and sci-fi. Always interesting to see. 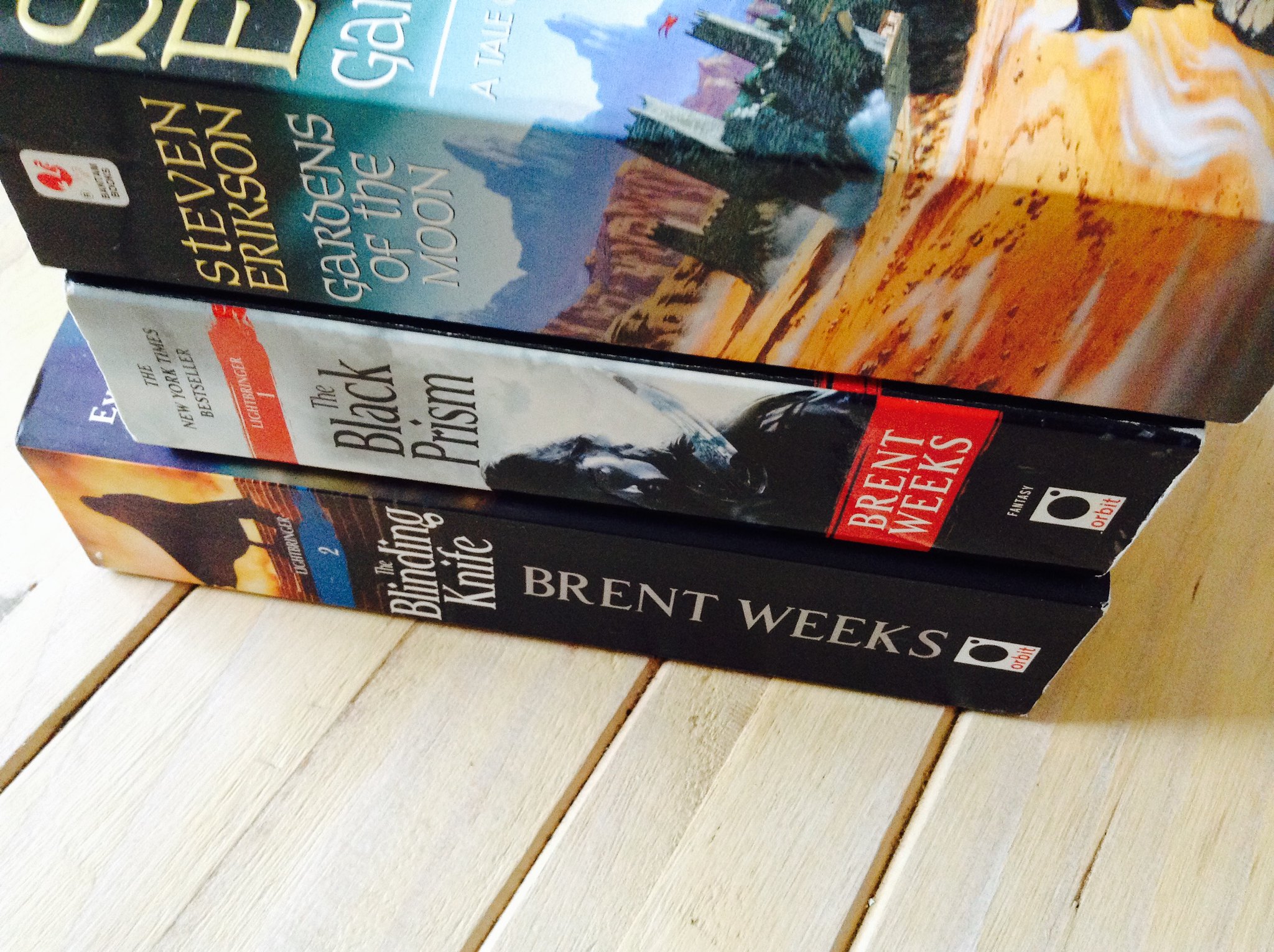 ★ Gardens of the Moon (Malazan Book of the Fallen 1) by Steven Erikson
★ The Black Prism (Lightbringer 1) by Brent Weeks
★ The Blinding Knife (Lightbringer 2) by Brent Weeks
The first stand I bought at had 3 english pockets for 10 Euro. Yeah I had to go for that. So I found Gardens of the Moon and The Black Prism quickly but after that I struggled a little. I saw a lot of Briggs but not the first one and so I ended up picking The Blinding Knife, the sequel to The Black Prism, even though it doesn’t match. I can live with that. Sort of. 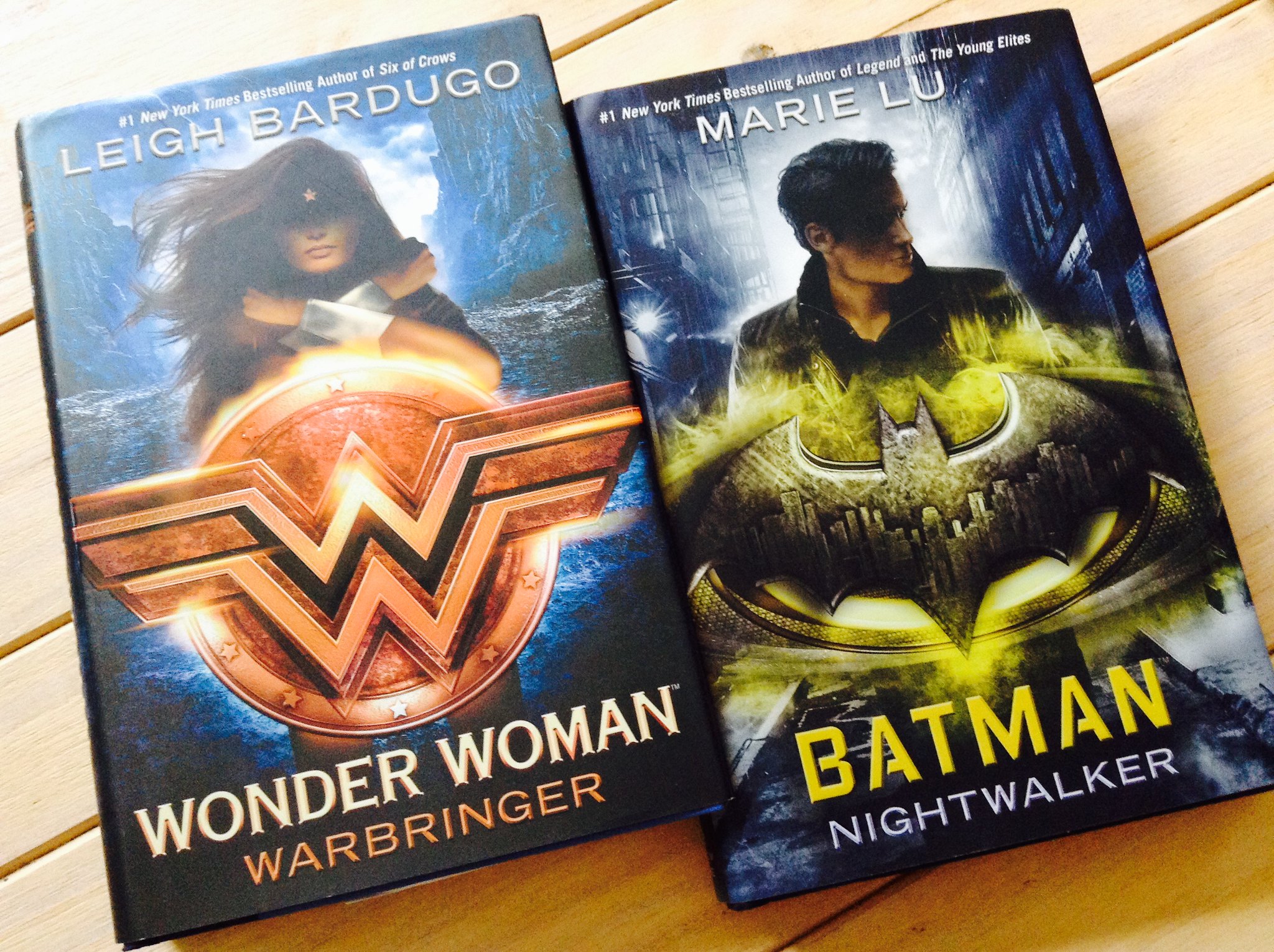 ★ Wonder Woman: Warbringer (DC Icons 1) by Leigh Bardugo
★ Batman: Nightwalker (DC Icons 2) by Marie Lu
I had been going back and forth on getting these but when i saw them at the stand of Dutch publisher blossom books for 10 euro each in hardcover I decided to just go for it. 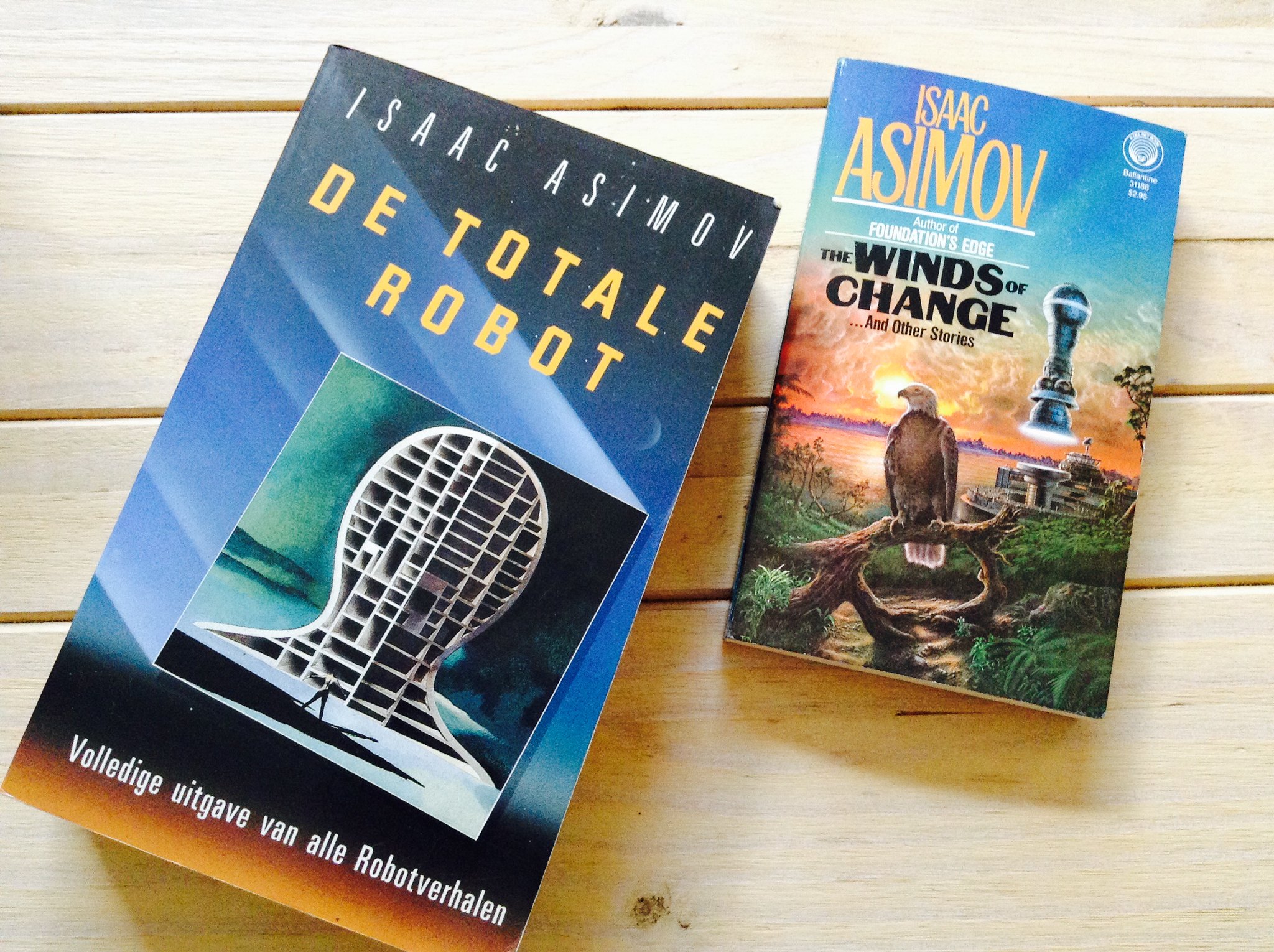 ★ The Complete Robot (Robot 0.3) by Isaac Asimov
★ The Winds of Change and Other Stories by Isaac Asimov
After reading I, Robot last year I’ve been meaning to get to others of his work but haven’t. So when I saw this I wanted to go for it. The Complete Robot, that I got in Dutch, has all the short Robot stories from what I can see which is good. The Winds of Change is another collection of short stories that have nothing to do with the robots from what I gather. 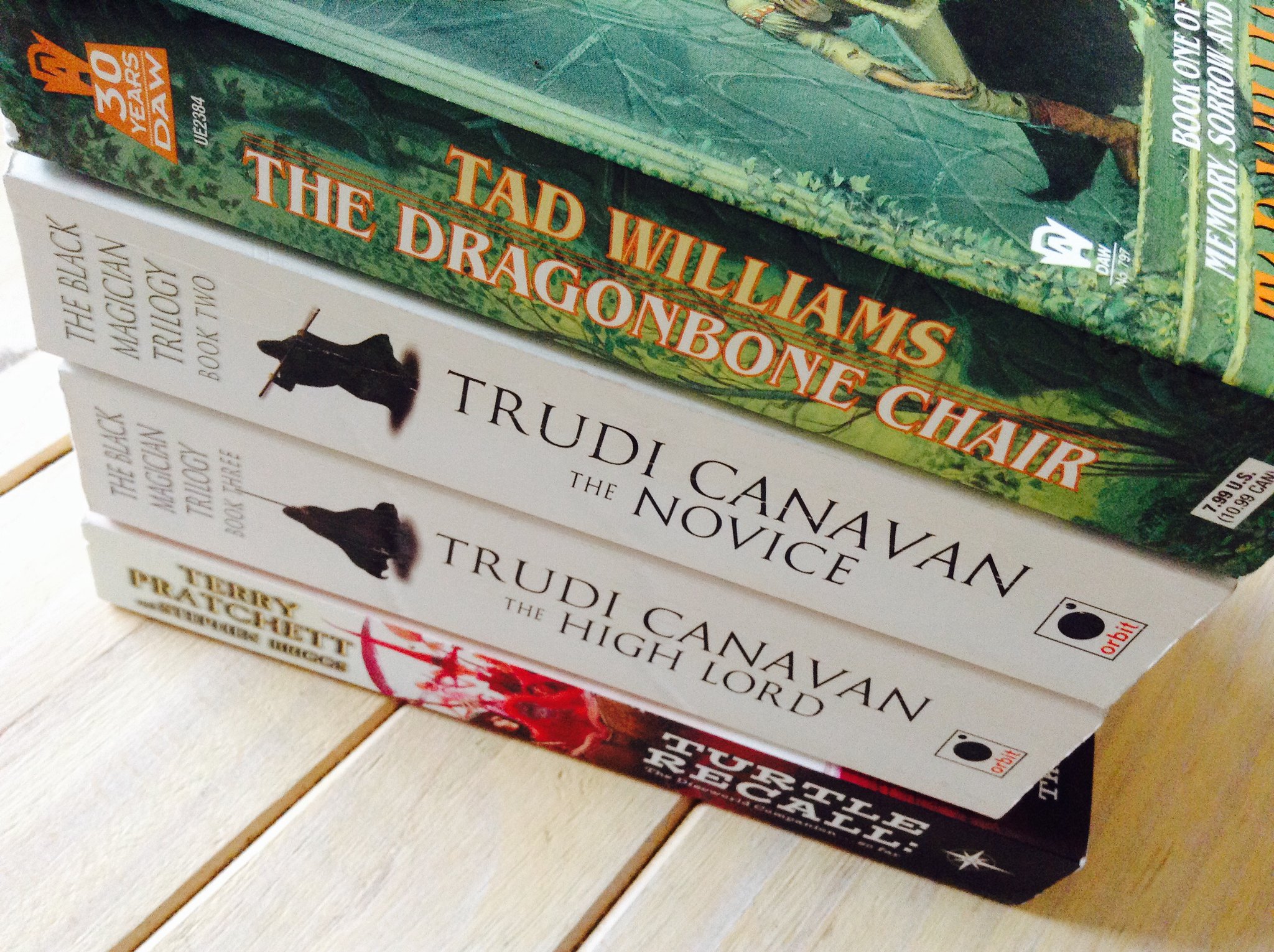 ★ The Dragonbone Chair (Memory, Sorry and Thorn 1) by Tad Williams +
★ The Novice (Black Magician 2) by Trudi Canavan
★ The High Lord (Black Magician 3) by Trudi Canavan
★ Turtle Recall: The Discworld Companion…So Far by Terry Pratchett and Stephen Briggs
This stand offered 4 english pockets for 10 so yeah… I quickly found The Novice and The High Lord with Turtle Recall but then wanted to add another. I went with The Dragonbone Chair because while I did have some hard times with the series I did enjoy and love Simon so I thought it was good to have it on my shelves at least. Unfortunately the Canavan books don’t match my first one in height, but at least now I can read the trilogy in one go which is why I hadn’t started before. 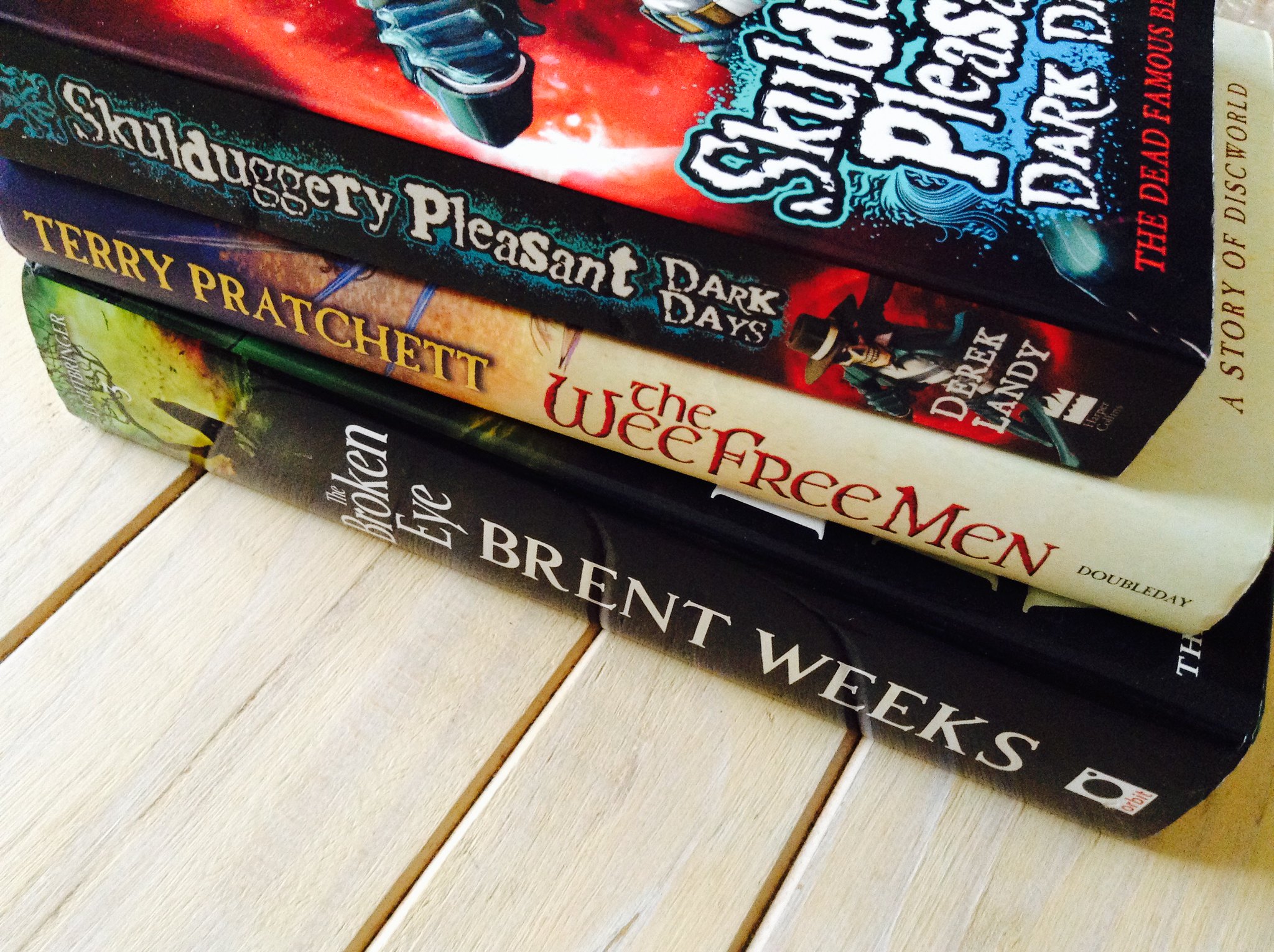 ★ Dark Days (Skulduggery Pleasant 4) by Derek Landy
★ The Wee Free Men (Discworld, Tiffany Aching 1) by Terry Pratchett +
★ The Broken Eye (Lightbringer 3) by Brent Weeks
And lastly I went to the stand where I found The Golem’s Eye signed last year. I couldn’t find what I wanted really in Pratchett and it was super busy there but I still got these. I’ve obviously read The Wee Free Men already. I figured since my Lightbringer series is already mixmatched as is I’d also buy this third one in hardcover. And I also got the 4th Skuldugger Pleasant book. I have the first two in bind-up. There was also a hardcover but it was damaged in the back and for that price I wasn’t going to take it.

★ The Caged Queen (Iskari 2) by Kristen Ciccarelli +
Releases September 2018
So happy I got approved for this on NG. I already have the dutch translation on pre order.
★ The Librarians and the Pot of Gold (Librarians 3) by Greg Cox
Releases October 2018
Last year I read the second one for review so when i saw this on ng I screamed and clicked.
★ How to Fracture a Fairy Tale by Jane Yolen
Releases November 2018
I have never heard of this author but the cover and that title drew my attention immediately on NG. It is a collection of short stories and poems that center around fairy tales for as far as I can see which is enough for me. The synopsis says the big bad wolf retires to a nursing home. I mean, isn’t that an instant need?
★ The Dark Descent of Elizabeth Frankenstein by Kierstin White
Releases September 2018
You have no idea how hard I screamed in my head when this popped up in my inbox.
★ Give the Dark My Love (Give the Dark my Love 1) by Beth Revis
Releases September 2018
I’m curious about this. I haven’t read anything by Revis before and I wasn’t too sure about this but the word necromancy sold it on me to try. I know. 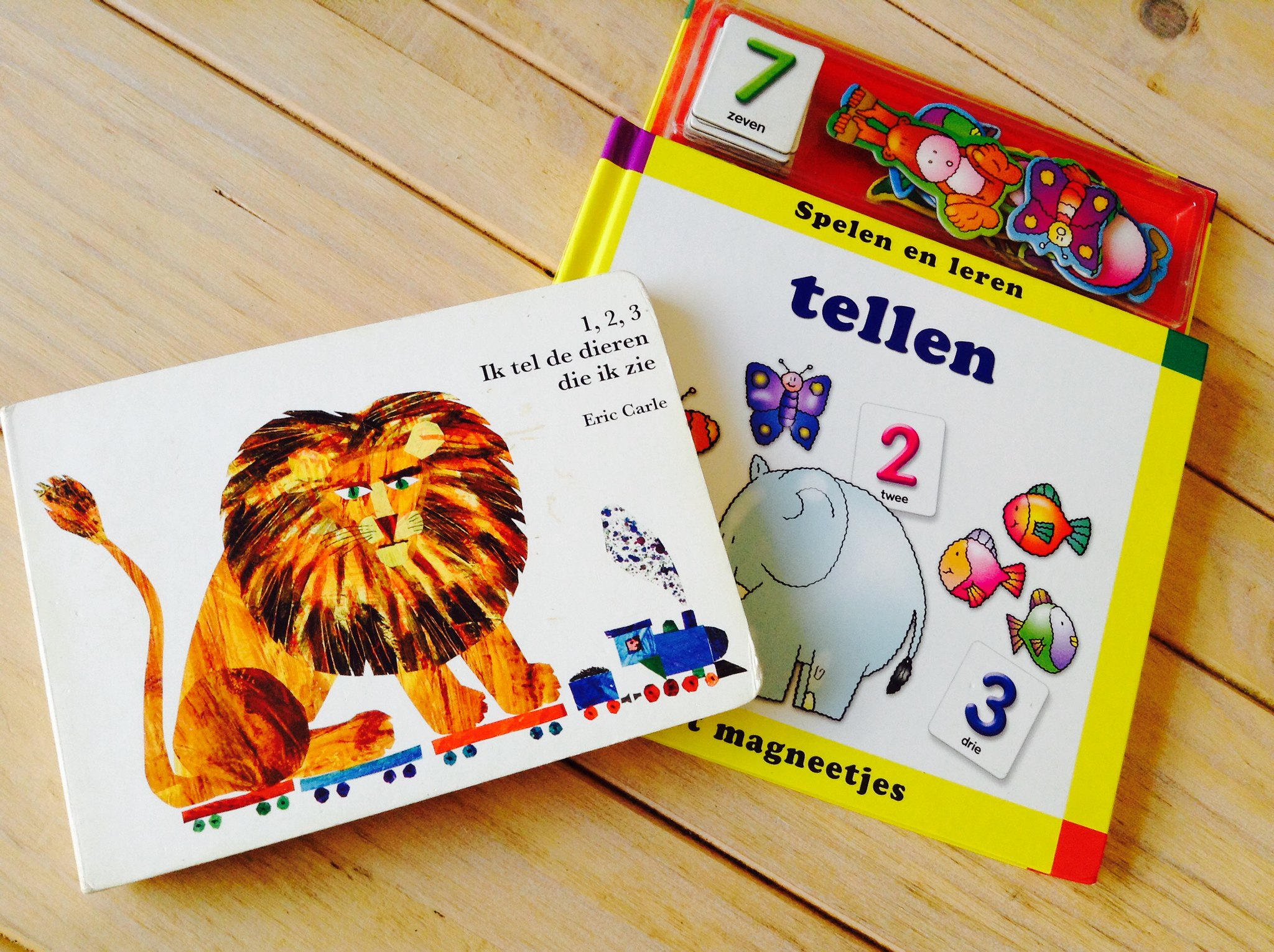 Two books about counting. Eric Carle is quite well known but I am not normally that drawn to his drawing style. But Merijn really likes numbers at the moment and for the price I figured I’d get it for him. I liked the other one because it has magnets with it and it looked like something fun to do with him. 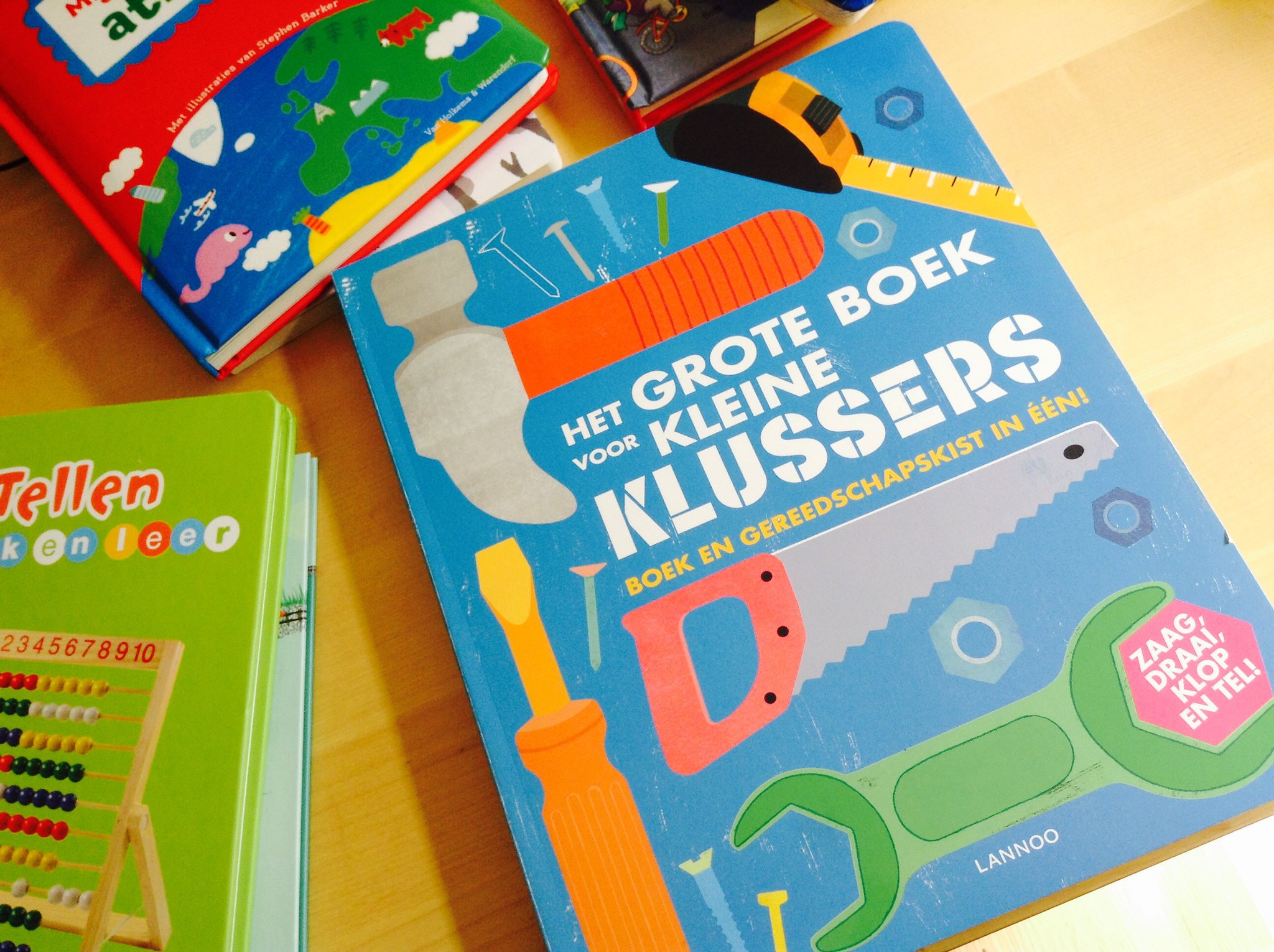 This is the first book I bought for his birthday back when he was only 18 months. I saw it and knew that this was something he was going to love to play around with but that he needed to be a bit older. The book has the items pictured that you can take out and saw with or something like that. 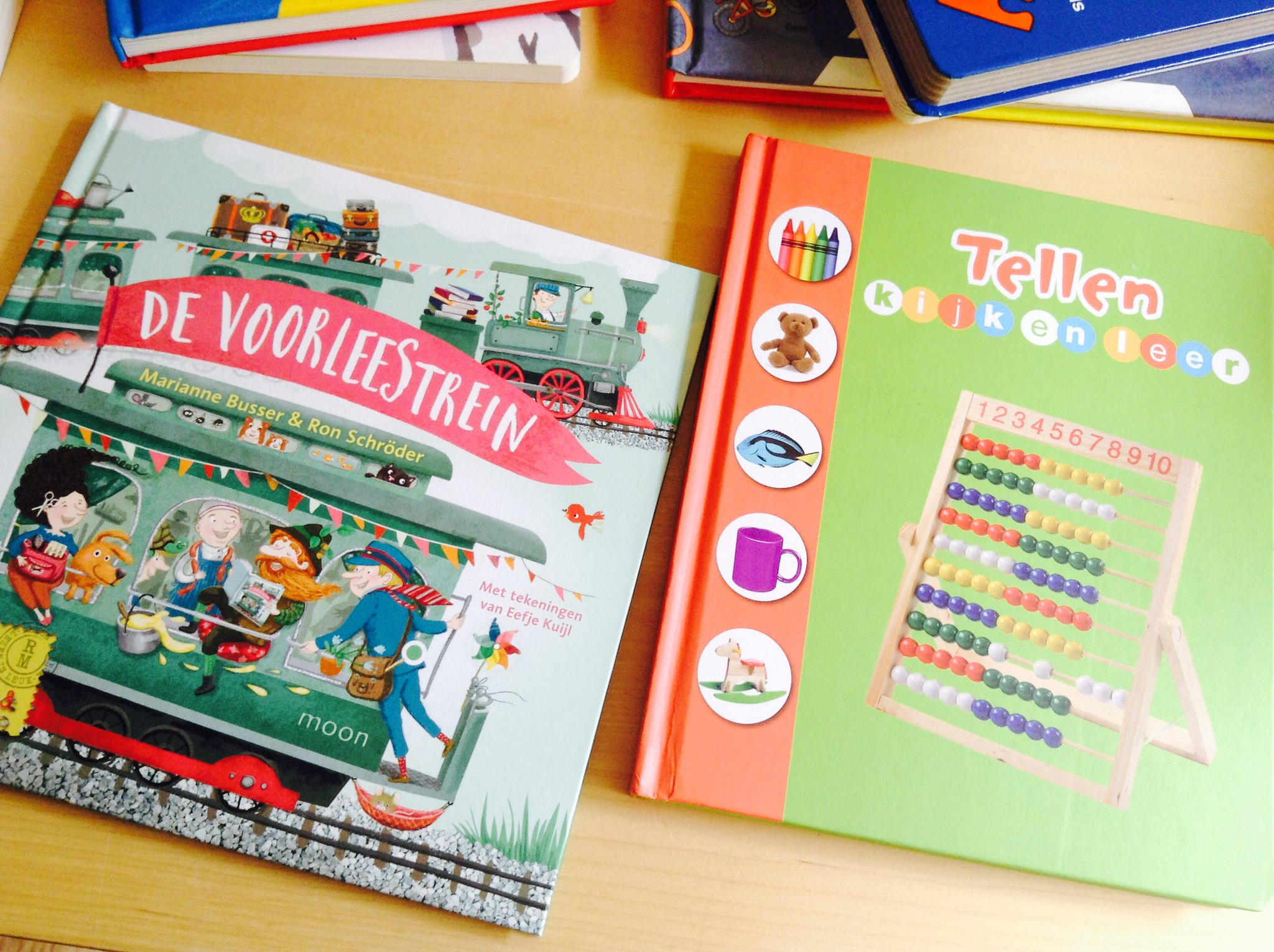 The first book is the Read Aloud Train. We have a few other books by this author duo. Its still maybe a little above his level in interest but I think in a few months he’ll end up liking this one. The other one is another counting book we got for him. 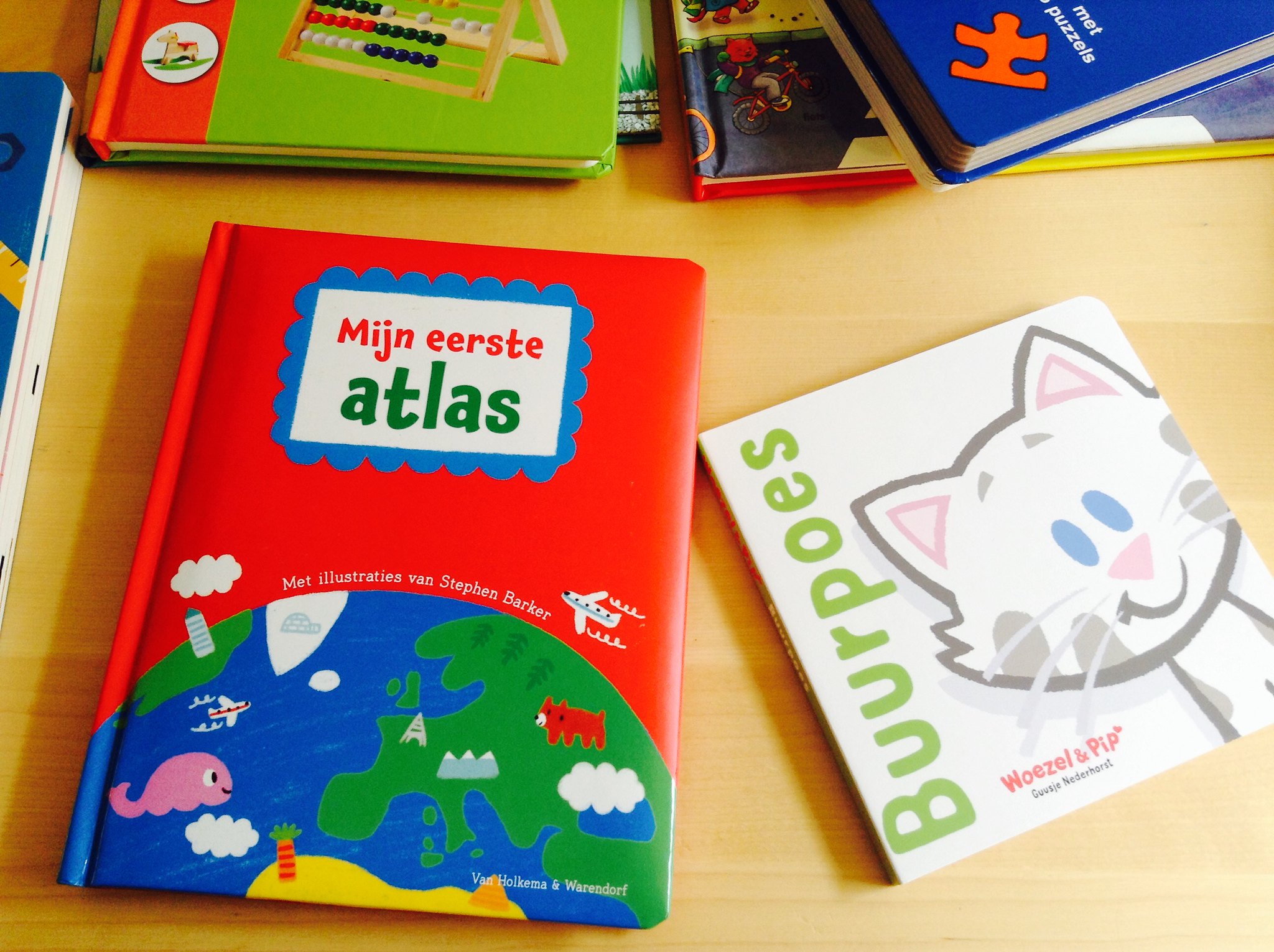 Next we have My first Atlas. I just like the idea of making his small world a little bigger this way and from this we can work ourselves up to more accurate maps. The other book is Buurpoes, a character from a Dutch story Woezel and Pip by a Dutch author. This is one of the side characters. Merijn has the plushie and this character on a pillow. It is also a cat so that makes it even more something he likes. 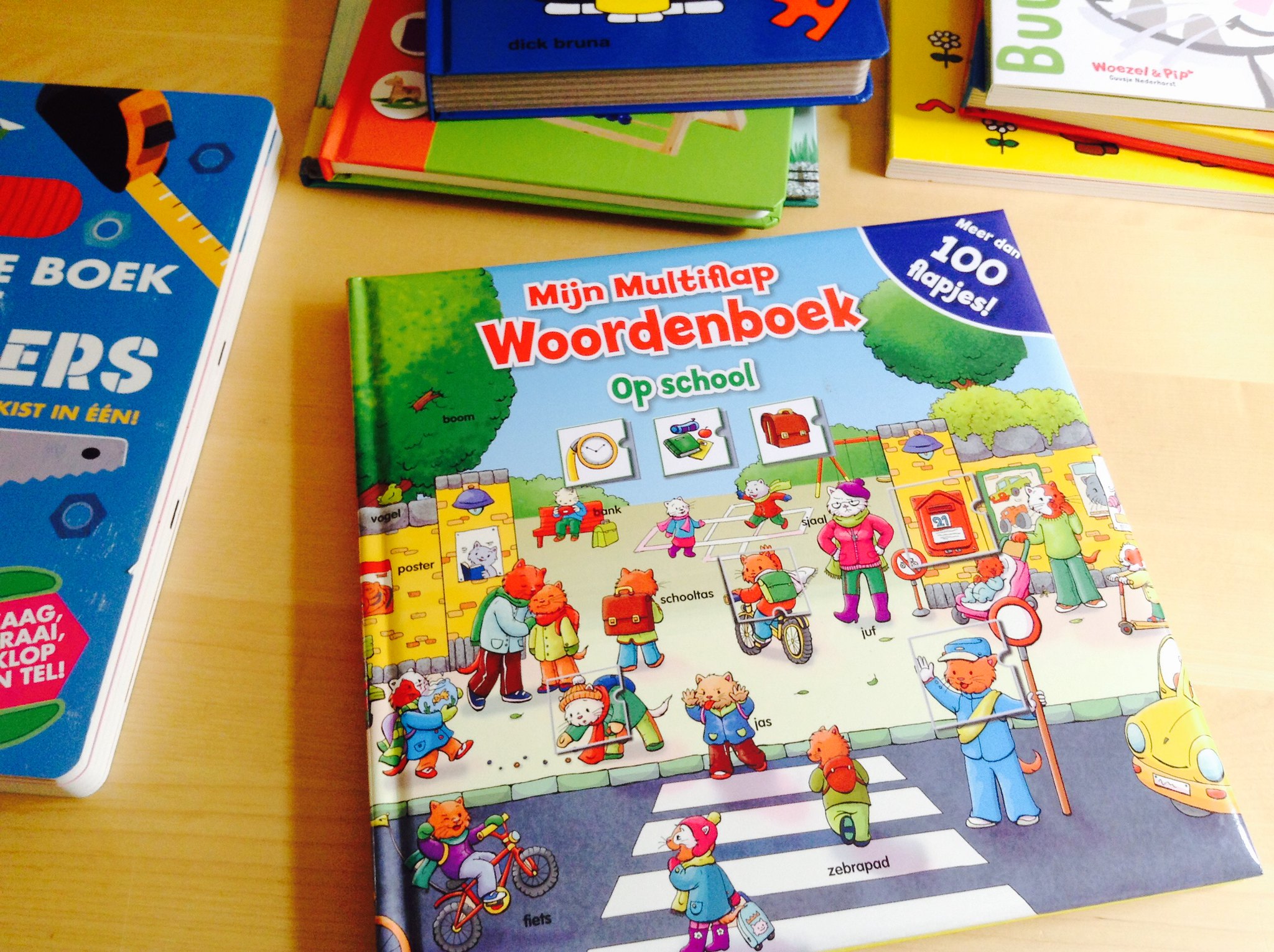 This book he got from a family friend. We have one big one like this and a few tiny ones. We actually have this one as a tiny one but I’m glad we have this as a big one now because the bigger ones are just so much more clear for him. 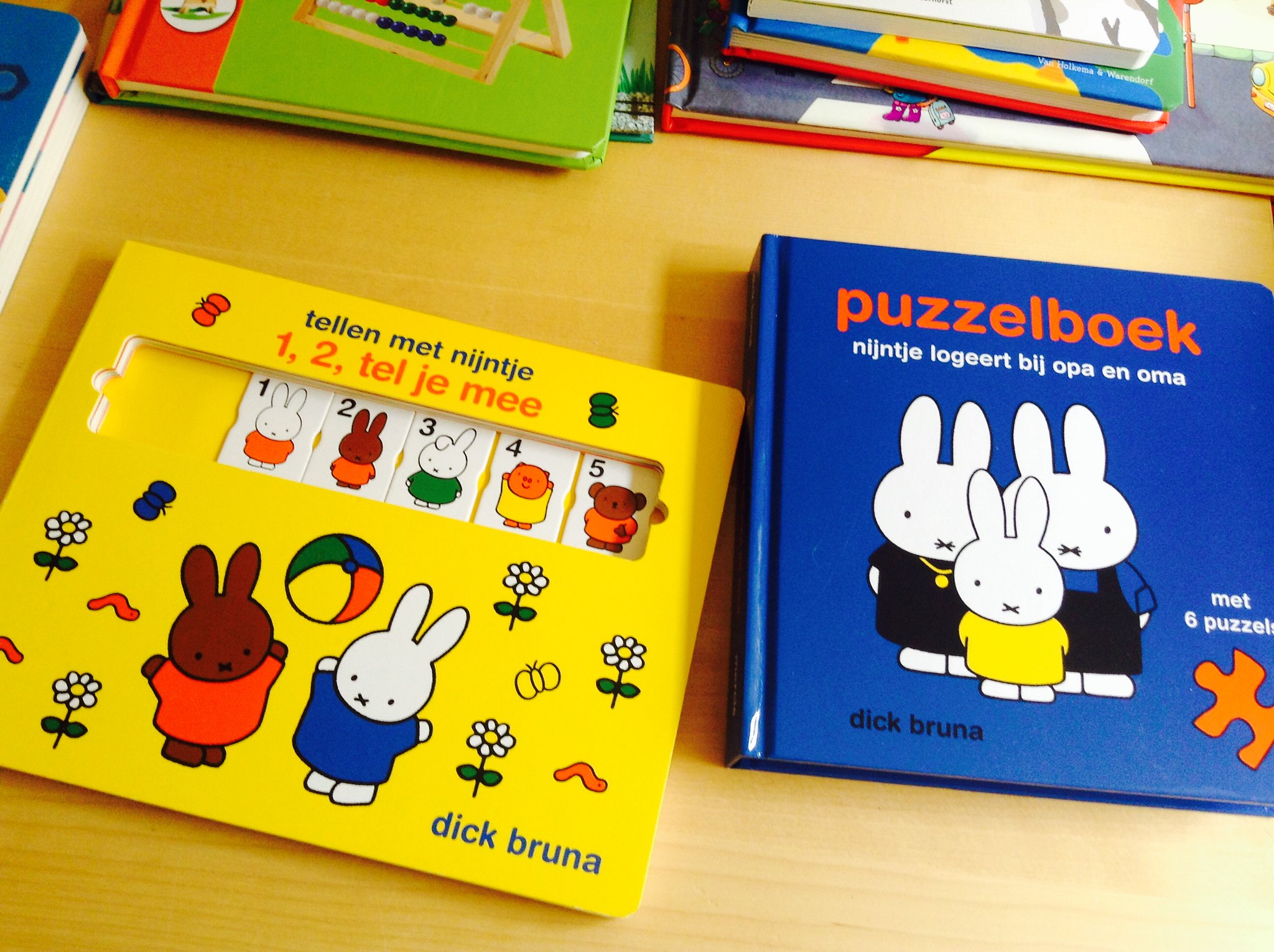 The counting miffy book he got from a family friend that was on the wishlist I had created. The other Miffy book has puzzles in it that I had picked out with my parents. 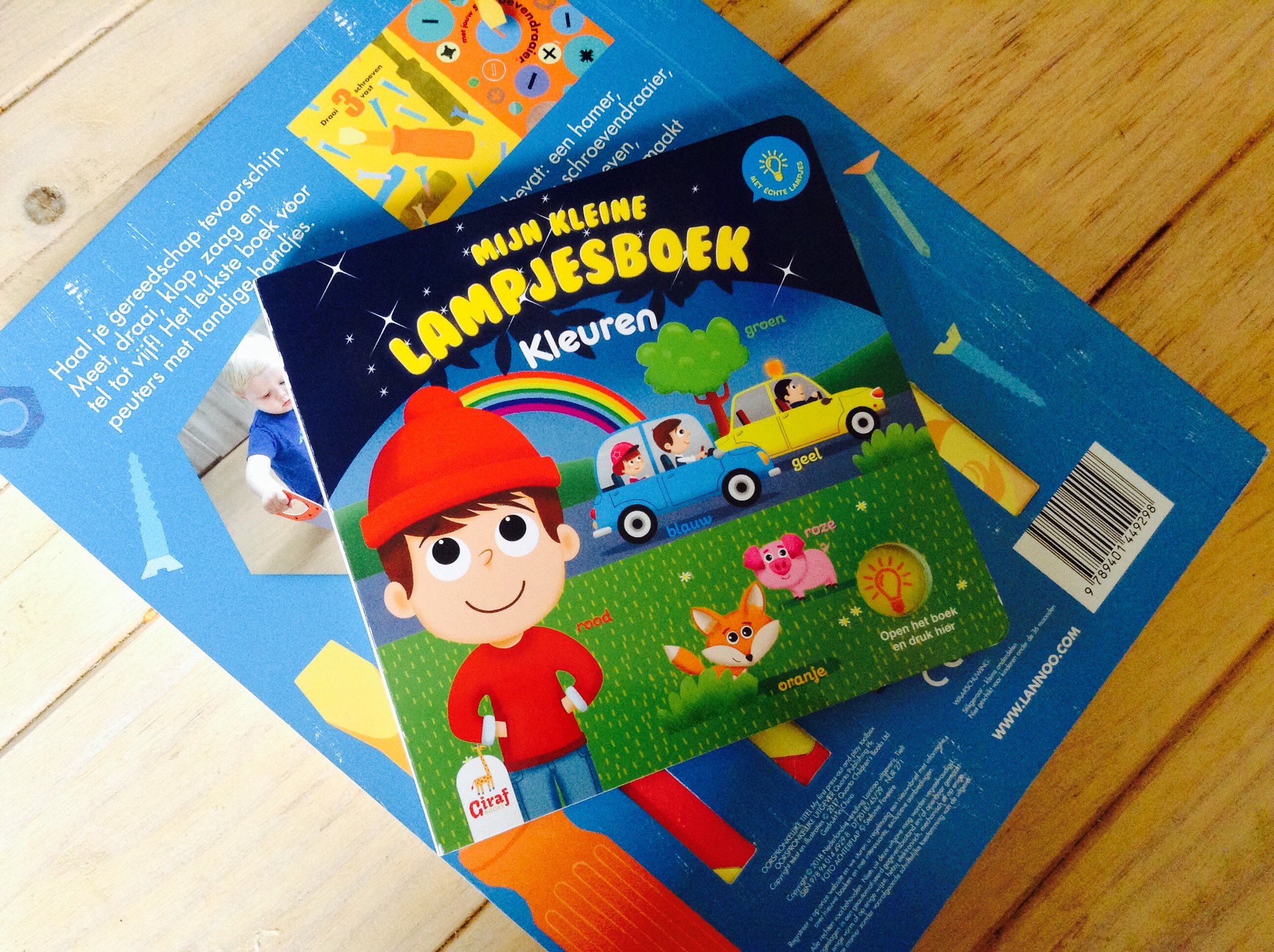 And lastly he got this fun lamp book from my friend and her twins. You can put the lamp on and there are lamps on inside with different colors. It is a lot of fun.

And no he didn’t only get books but I tend to ask more for books because that is something he never tires off unlike toys.