July is mostly marked in history because of heat, heat and some more heat. The unlikely heat wave with 37 degrees was one of the most talked about topics in our country. And it was what influenced my month the most I’d say. It was harder to focus. Heat is not my thing. Neither is it Merijn’s. 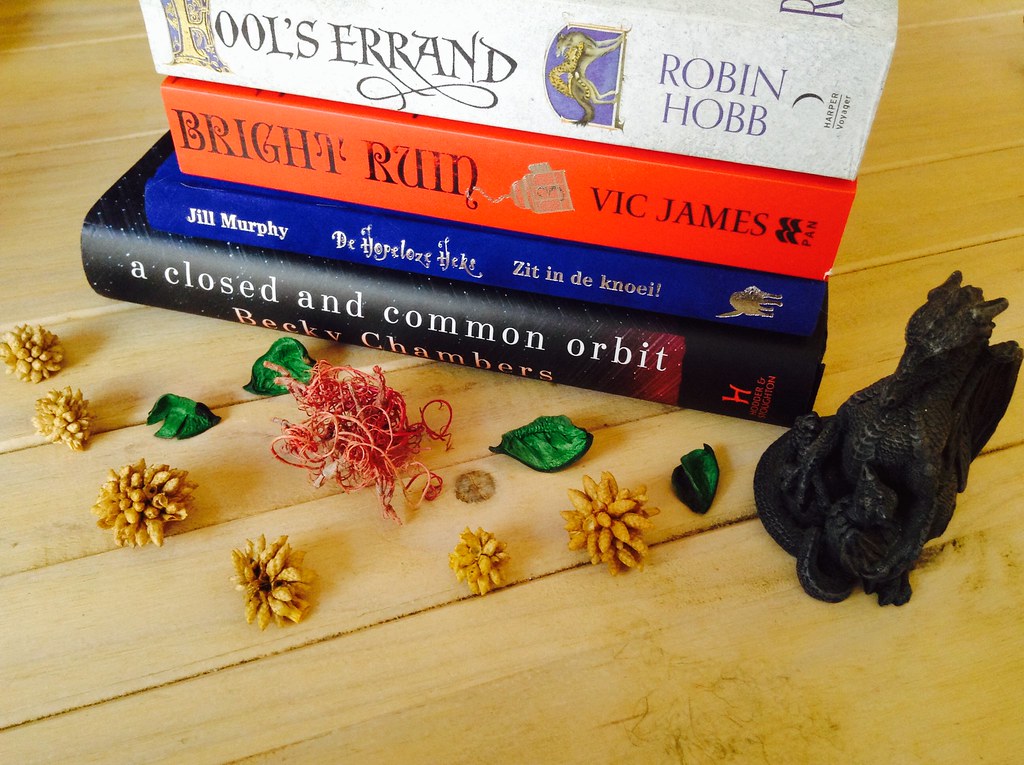 Despite the long list there were a bunch of comics in there again. With the heat I’ve just found it hard to focus. Plus we went away twice which limited my normal reading time severely. There were also 3 books over 500 pages.

As mentioned in my wrap up of June I am participating in the Throwback Bingo by the facebook group Life & Lit in July and August. Below you can see the bingo card and how I have been doing so far.

⌘ The first full week of July wasn’t all that grand for me body wise. I forgot my meds a few times so that made me feel shit. Then I dropped a heavy wooden board on my big toe and badly bruised it. I swear, for the first hour I thought it might have been broken. It hurt so much. With my other foot I stepped on a block. Not my week.

⌘ Luckily Merijn could go to his grandparents that weekend and stay the night so I had a bit of a break.

The Amulet of Samarkand was first released September 2003. This year it will mark 15 years. Time to celebrate! @JonathanAStroud #15yearsbartimaeus pic.twitter.com/5ZJSfQ3PD8

⌘ I’ve never gotten as many likes on a tweet as I did on this announcement for a bartimaeus readalong 😀 Will you be participating? I’ll be posting all of the information tomorrow! 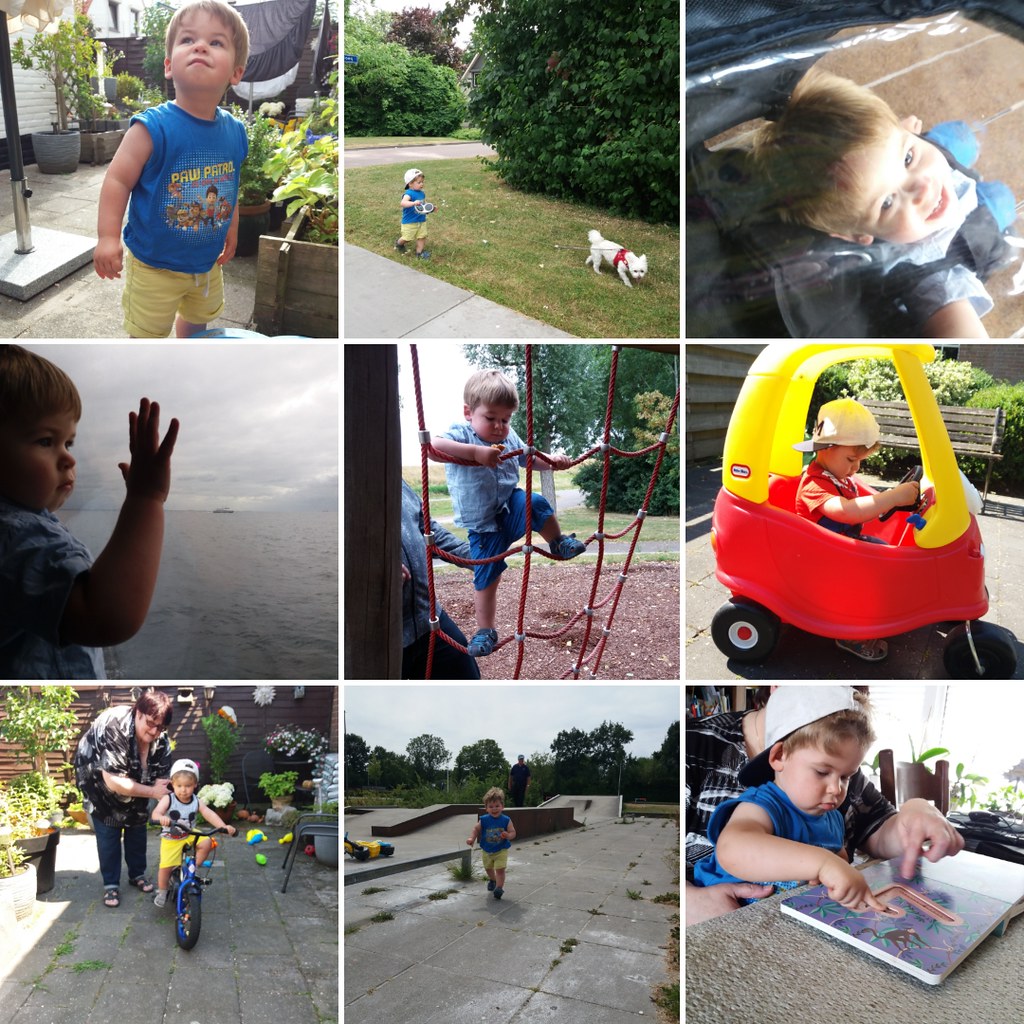 ⌘ For a week Merijn and I went to my parents. Maarten has to work so much that we can’t make it as much as we should so I went with just Merijn this time. My parents really enjoyed all the time with Merijn as did he. We took the ferry to Vlissingen and back, shopped, played, walked (merijn on his walk motor). So good times.

⌘ We went to Deventer and to the Fantasy Meet and Fair Coevorden this month. About both a blog post will appear. 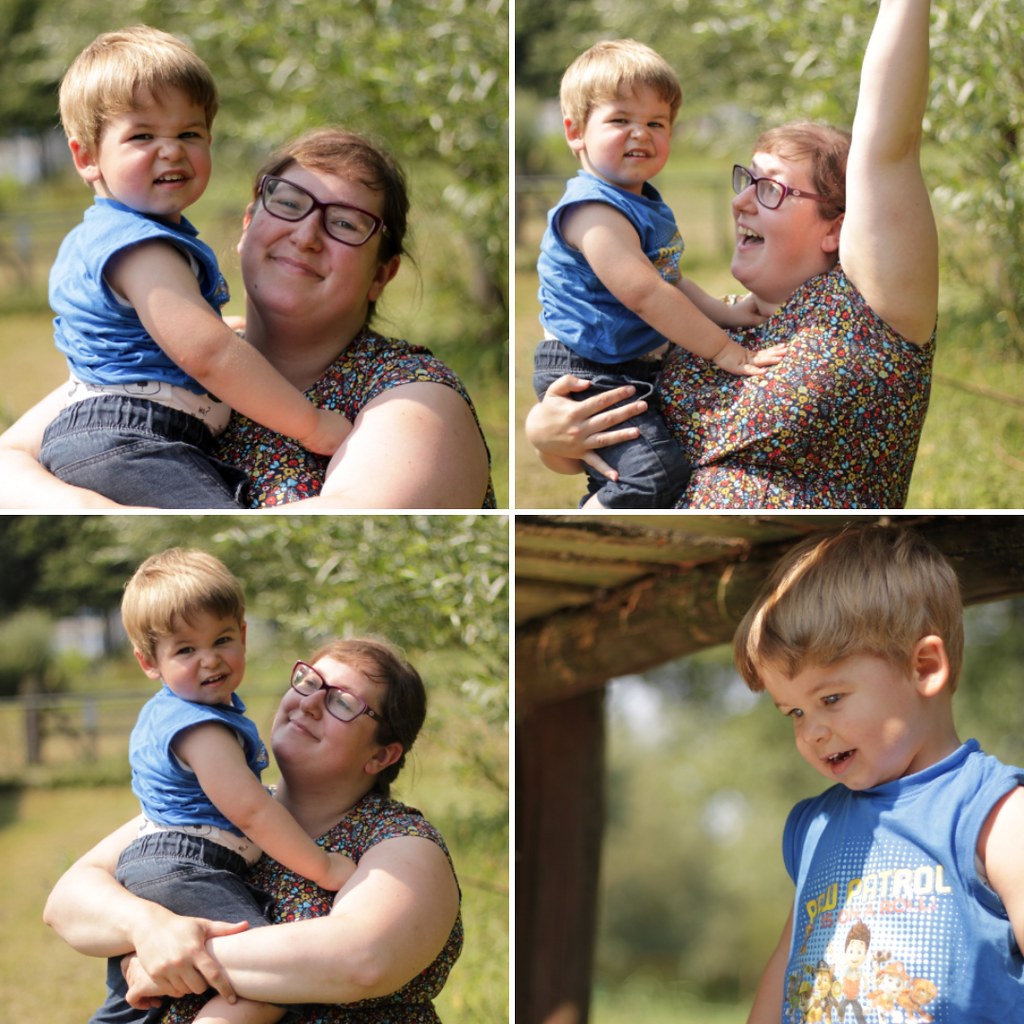 ⌘ We had a play date with my friend and her twins and she took some amazing pictures of the two of us. ❤

⌘ The Netherlands and surrounding countries had a heat wave. It is very uncommon for here for it to be above 30 degrees for so long and it is said it will remain until half August. We even had days of 37 degrees. I’ll have melted a hundred times over by then. You can imagine that with a toddler, yeah not much fun. 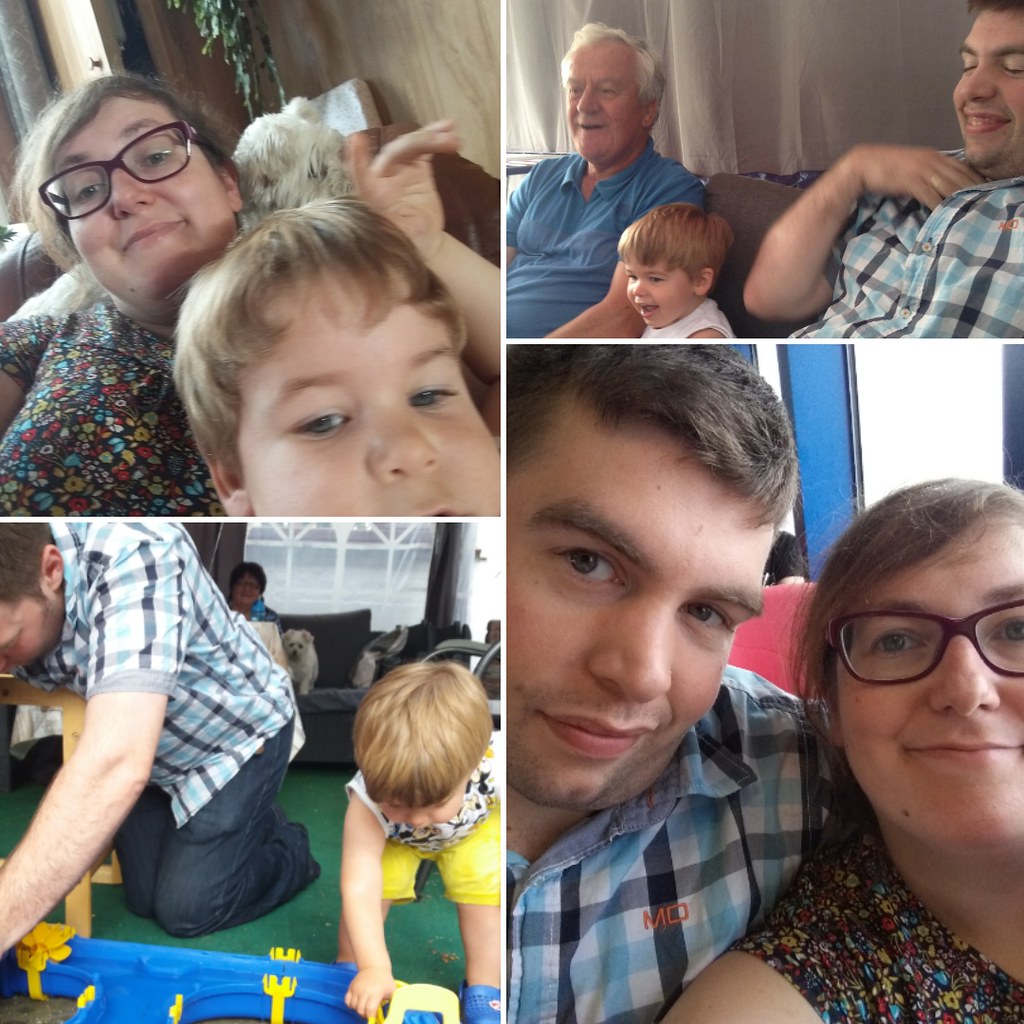 ⌘ Husband had unexpected extra few days off and so we went for an extra trip to my parents. We drove through the heat twice and had a puking toddler in the back. Fun. But we had a good time there. It wasn’t quite as hot there near the sea and with the wind. We visited Middelburg (and I visited their book store which I will do a post on at some point this year) and Terneuzen. Of course there was book buying happening, including my husband who got some bind-up Suske and Wiske’s for really cheap.

Top Ten Tuesday
Red, White and Blue Books / Retellings / Favorite Novella’s and Short Stories / Popular Books That Lived Up to the Hype (for Me)

Other Posts
Dancing Out of June 2018 / Mid-Year Book Freak Out 2018! – With a quick look at my goals and some extra / I Spy with My Little Eye…a Challenge! / Twenty of the Shortest Books on My TBR / Sharing With You the Survey Results – 2018

⌘ Zoo / Season 1 / Ep 4 – 13 / Finished
I have various thoughts. Mostly good. Though I’m not sure how I feel about that ending to be honest. But it sure beats the book haha.

⌘ Falling Skies / Season 5 / Ep 1- 6
I could have done without the revenge Pope plot there. Really. Stupid diversion of the actual plot. I thought we were done with the shitty Pope story lines anway?

⌘ The Incredibles / Movie
I think I saw bits and pieces of it way back but now I can really say I have seen the movie. I liked it. I’m not amazed but I liked it well enough. And I am looking forward to seeing the new movie once it comes out on dvd.

⌘ Tour de France 2018
In the background I watched a lot of Tour de France. It was hard to focus on it though with Merijn running around and struggling with the heat. So yeah I don’t feel like I got a lot of what happened.

I finally hit 1k on my bookstagram account. Yeay me.

#beatthebacklist prompt is #shelfie so here you have my #bartimaeus books by #jonathanstroud Did you know I'm going to host a readalong this Fall for this series? All the info will go up on my blog on August 6th. . . . #bookstagram #booksofinstagram #booksofig #readersofinstagram #bookaddicted #booklover #bookobsessed #spreadthebooklove #blogger #bookblogger #boekenblogger 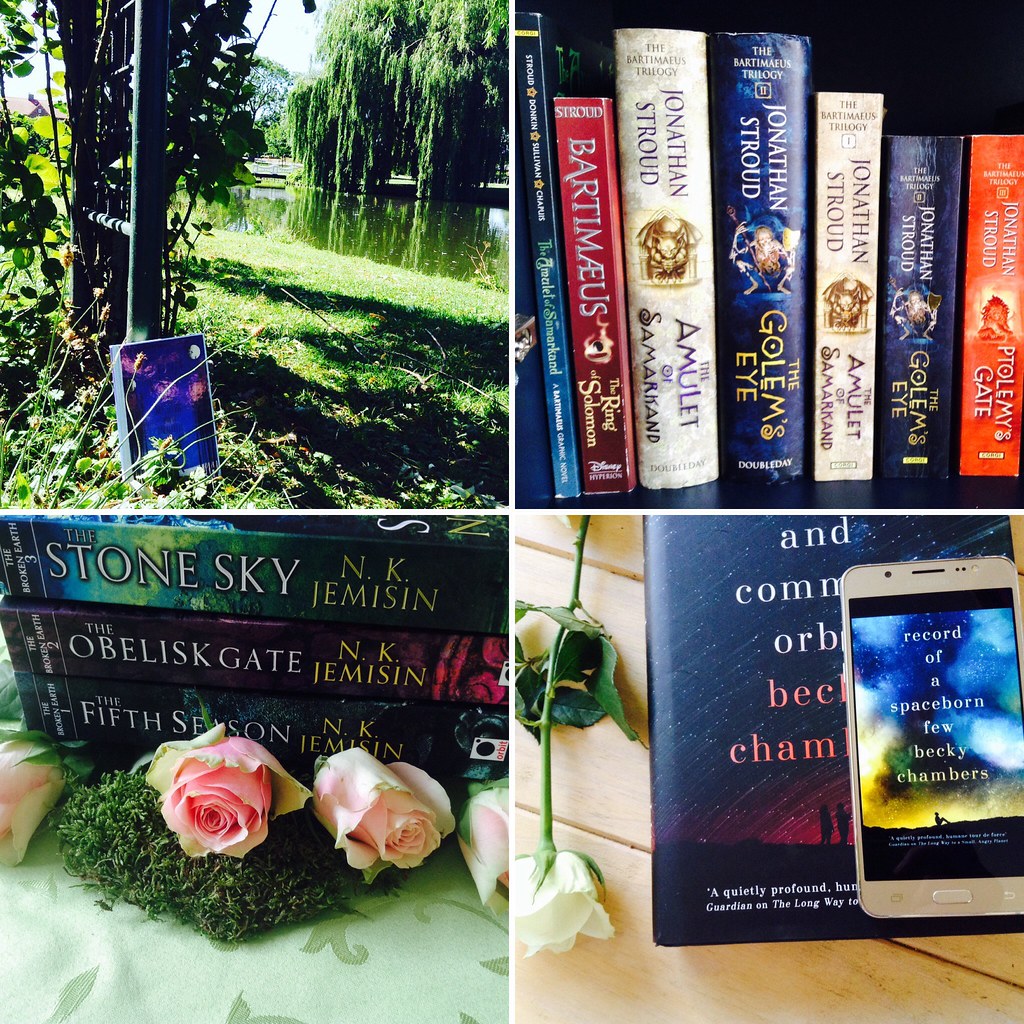 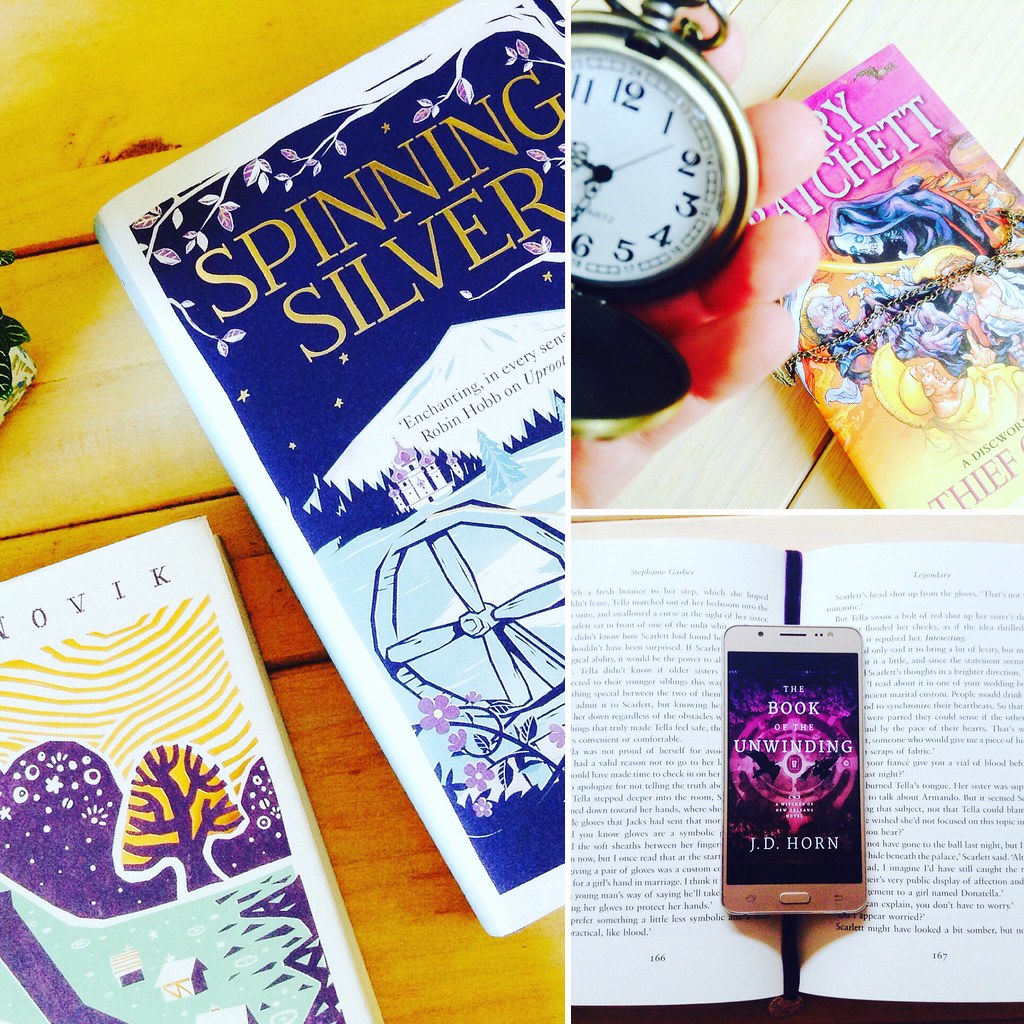 ⌘ Lindsey from Lindsey Reads uses the top ten tuesday prompt to tell you something about Belgium.
⌘ Jenny from Jenny in Neverland wrote a beginner’s guide to SEO for bloggers.
⌘ Holly from Nut Free Nerd visited Amsterdam.
⌘ Jill from A Book Nerd Reads guest posted on Word Wonders about why asexual representation is important.
⌘ Destiny from Howling Libraries posted about the Booktubeathon and listed some booktubers to watch.
⌘ Aentee from Read at Midnight created wallpapers for Uprooted and Spinning Silver.
⌘ Chiara from Books for a Delicate Eternity shared her fave queer sci-fi books.
⌘ Cait from Paper Fury answers your frequently asked questions about publishing and querying. She also shares how to keep writing with a mental illness.
⌘ La La in the Library and Jolene from Jo’s Book Blog are hosting Dog Days of Summer again this August. Read more about it here.
⌘ Suzanne from the Bookish Libra discusses how her reading has changed over the years.
⌘ Krysta from Pages Unbound responded to the Forbes article about Amazon replacing libraries.
⌘ Shealea from That Bookshelf Bitch listed 2018-2019 Asian-inspired fantasy novels to drool over. And here some sci-fi ones.
⌘ Jenny in Neverland talks about her journey into reading and why reading is so important to children.
Jackie B. from Death by Tsondoku talks about breaking up with Netgalley.

⌘ Sue from Boekenz shares 5 tips to stimulate reading (with children).
⌘ Emmy from Zon en Maan talks about how she creates her cancles.
⌘  Liesbet from Zwartraafje shares covers to do with our current heat wave.
⌘ Marcia from Boekvinder was in the jury for the Hebban Debut Price.

⌘ La La in the Library shared this article with me of 5 things fantasy writers can learn from Terry Pratchett, and it is a great reminder as to why I love his books so much.

⌘ I’m working on a readalong as you can see and my post about that will go up with details on August 6th, so tomorrow. Mark down the dates on your calendar~!

⌘ As this posts I’ll be going to the Deventer book market so uhm expect some more books? 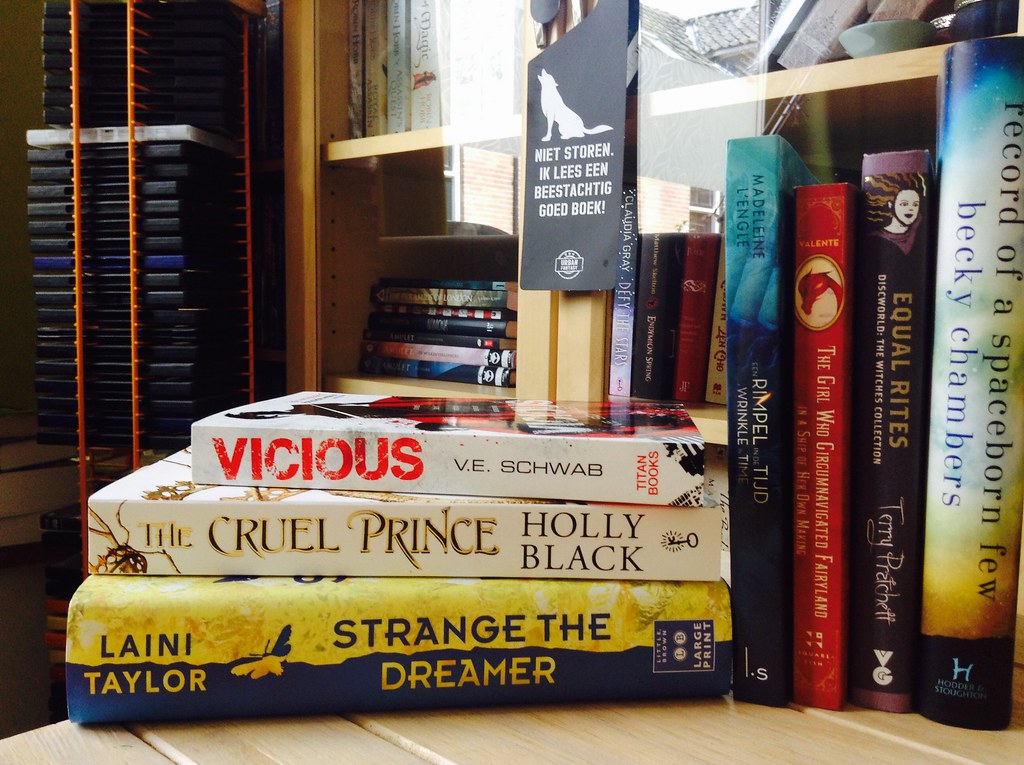 ⌘ From August 6th to the 13th I’ll be participating in the Make Me Read It Read-a-thon. I will for sure be reading Vicious and Strange the Dreamer and if I have some time left that week I’ll be reading The Cruel Prince as well. 🙂

⌘ The rest of the month I’ll be focusing on some review copies like Sea Fire, Tempest and Slaughter and The Demon Race that I need to read. And I would also like to read the first Fairyland book and Equal Rites and The Silver Tide (so I can finally finish that trilogy). And then I also have the buddy read for The Record of a Spaceborn Few coming up and maybe I can squeeze in Tawny Man 2.