June was another up and down month. From having 30 degrees to going back to 15 degrees in a matter of days. But also a teething and sick toddler and my own mood swings  with voice loss didn’t make this month any better. Even so I think we got through it okay and I don’t think too badly of this month, looking back. 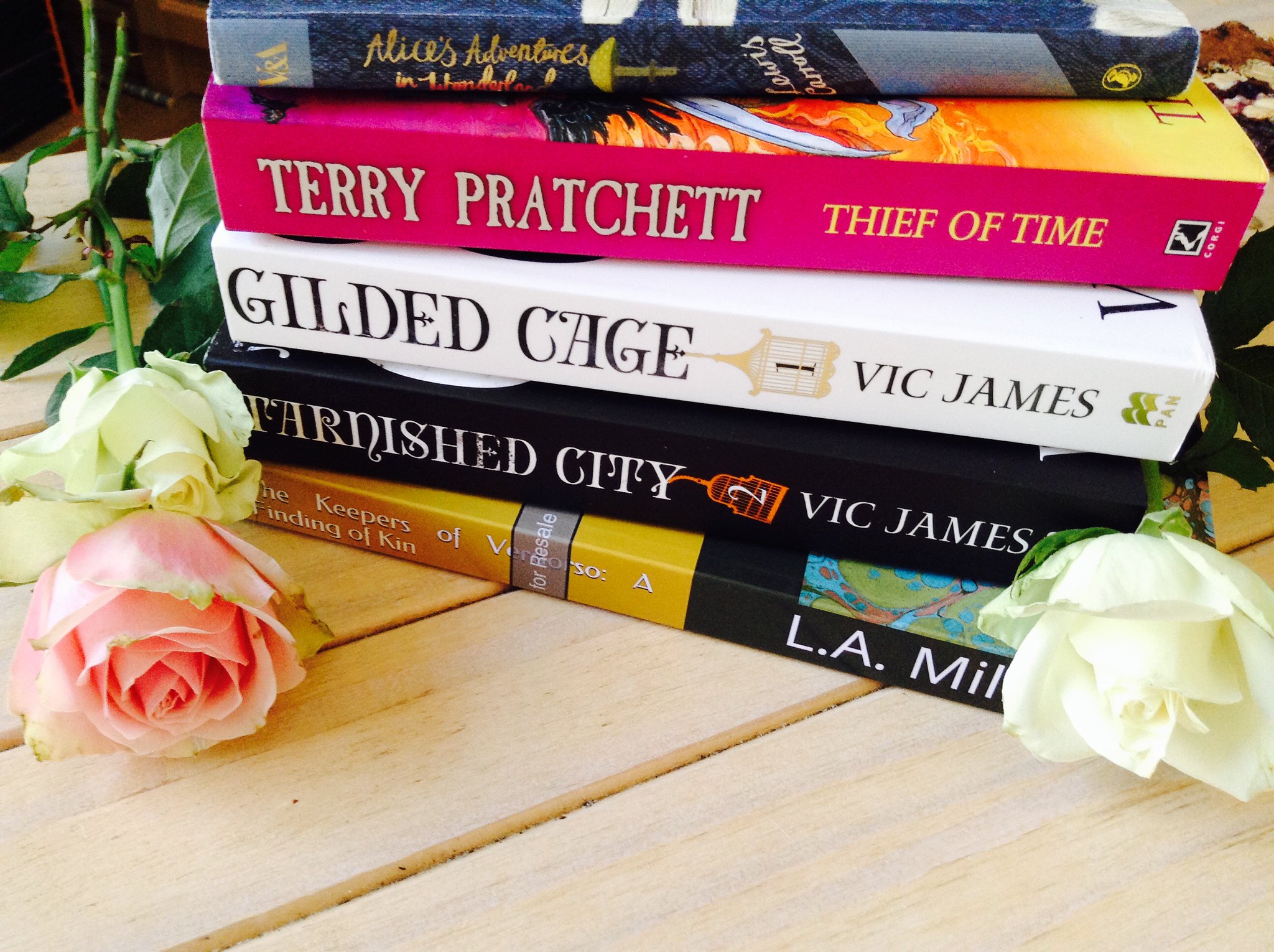 Okay don’t look at this total number. I read a TON of comics from the library. Thirteen to be exact. But whatever I’m counting everything these days haha. I was very distracted at the start of the month and I had a hard time focusing on reading so the comics just helped.

I hit this goal for the second time and I think, while I will still keep track of it I am not going to set myself a new goal. I don’t need a goal because I obviously read a lot of backlist books. I also kind of lost interest in beat the backlist as a whole challenge because of it.

⌘ The first of the month Merijn had grandpa day. I had a headache though and found it hard to focus myself so besides watching Agents of Shield I got very little done. (Turns out it was the prelude to that time of the month, yeay).

⌘ The day after we went to a wedding in the evening and stayed for an hour and a half, way past Merijn’s bed time but he did pretty well. Dad was of course chatting while mom was entertaining toddler lol. Husband also unexpectedly had the whole weekend off because he had to work the whole next weekend to fill in some shifts. 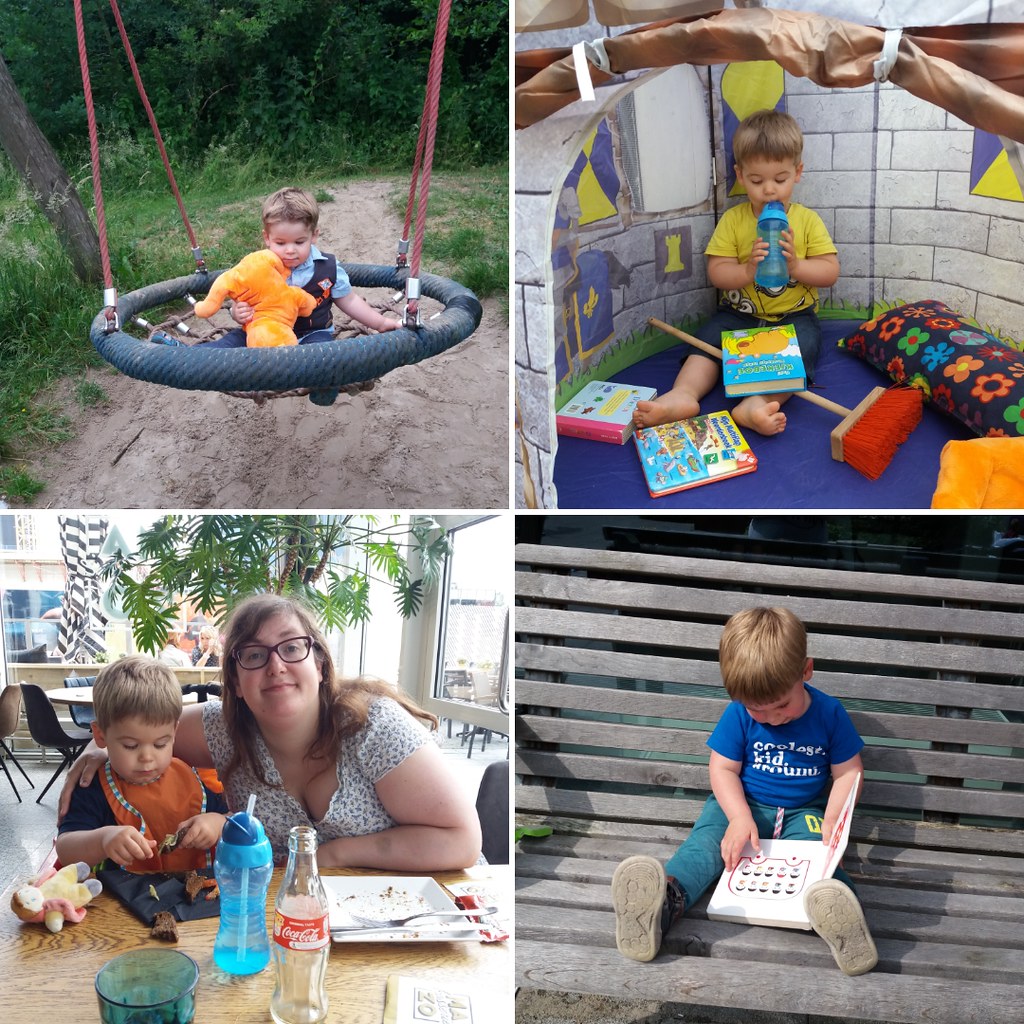 ⌘ On the 5th husband had another day off before his six days in a row (one being school, exams). We ended up going to The Hague which ended up being quite the adventure because it was a very last minute decision and we really didn’t look up anything. We just went. As such we mostly just walked around. Merijn also puked on himself as we drove there, literally 10 minutes before we got there. So that stunk. Literally. We got him as clean as could be and had to buy an extra shorts because I forgot to repack that after grandpa day. Even so it was mostly fun. Nothing wrong with some walking around. And as it wasn’t too hot, it was enjoyable enough.

⌘ The puking wasn’t a fluke though and on Friday Merijn woke up from his nap with a high fever. As husband had to work all weekend I was pretty much on my own with a sick toddler, got nothing done and was exhausted/frustrated at the end. But at least the cuddling was nice.

⌘ The week after that was all kinds of exhausting. Merijn wasn’t really back to his usual self so there was a lot of crying. I met up with my friend with twins, had a meeting regarding volunteering (and I took on a nice bit of responsibilities) and there was also the mom cafe we visited.

⌘ For Father’s Day I took husband to a last minute viewing of Jurassic World 2 the night before. He unexpectedly had the day of so it seemed like a good day to end the day. For Father’s Day he got some gifts, I made a cake and just let him relax a bit. 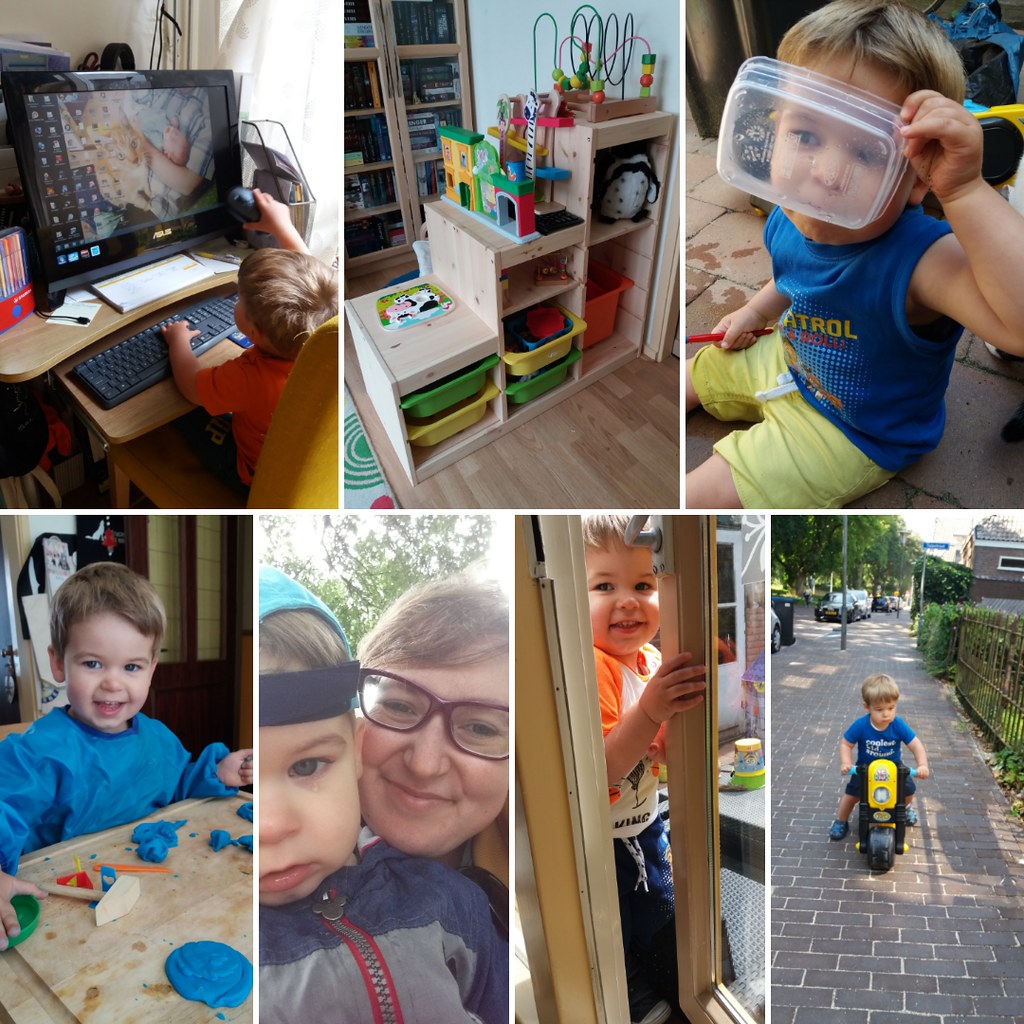 ⌘ It finally happened. Merijn tried to climb out of the playpen so we put it away and got a new cabinet for his toys. RIP calm starts and ends to the day. But he is doing pretty decent. And we got a lot of extra space back because almost all of his toys are now in the area where his playpen used to be. And he is seriously growing up so fast. 22 Months and he eats breakfast and lunch on a normal chair now. Two more months and he’ll hit two years.

⌘ I mean it when I say I love reading people’s mid freak out book tag answers so if I haven’t visited yours yet please leave me the link here or tag me on twitter or something. Mine is coming on Friday~

⌘ I did a free online masterclass about interpretating children’s drawings on June 20th. It was great but there was so much information. I would love to do the full online training but money~ At least I have some knowledge now.

⌘ The weather was a little weird in the midle of the month. We went from 27 to 16-18 degrees with unpredictable rain and wind, and then back to 27 the last week. Of course Merijn had a cold. Then I got a cold and lost my voice.

⌘ We’re going through our cabinets downstairs and selling things online to make space. I want to get rid of one of our cabinets (I brought this along with me when we moved in together. It is old.) Hopefully I can place a book shelf in its place haha.

⌘ I updated the review policy.
⌘ I created a page with my whole owned tbr on it (from downstairs).
⌘ I made a linktree.

Other Posts
Dancing Out of May 2018 / Time to Do the Netgalley Tag / Book Haul #33 – With a Merijn Haul! / Long Series I Am Committed to And Those I Want to Start / Books I Think Merijn’s Dad Would Like If He Was a Big Reader / It Is Time…a Book Buying Ban + Book Haul #34

⌘ Thor: Ragnarok / Movie
This was actually a lot better than the first two Thor movies. He was so serious in those and I could never warm up to him with the story lines he got or that romance. This however was a lot better. There was banter. At some points it bordered on the ridiculous though. So yeah.

⌘ Jumanji: Welcome to the Jungle (2017) / Movie
We didn’t have a lot of expectations regarding this movie but were pleasantly surprised. Look this isn’t a stellar movie, the stereotyping at the start had me rolling my eyes while I could have done without the romance. But it was fun and it made me laugh. I liked the bonding between the girls and the friendship they formed. It isn’t a remake of Jumanji. It fits easily after the first two, and they have just updated it to work in our modern world now into a videogame instead of a boardgame.

⌘ Cars 3 / Movie
We got this for Merijn but I didn’t think this was all that special and even worse than the second one to be honest. I did like how it referenced back to The Hornet though.

⌘ Moana / Movie
We finally watched this. We aren’t in love but it certainly is a great one again. And yeay no romance!

⌘ Jurassic World: Fallen Kindoms
So for Father’s Day we went to see this one. I liked it. But certainly not as much as the first one. There were some plot holes regarding the vulcano (they totally would have suffocated before even getting that close to the lava) and also in other places the plot was weak. Even so it was an entertaining watch.

⌘ Zoo / Season 1 / Ep 1-3
We actually watched the first few episodes on a tv station here two years ago maybe but then they changed it to their second tv station without letting its viewers clearly know, and we lost track of it. We got the dvd box of the first season now and I had a random itch at the end of the month to start this up again. I just really love the concept.

Rewatched: Zootropolis / Dr. Strange / Stand By Me / Alice in Wonderland 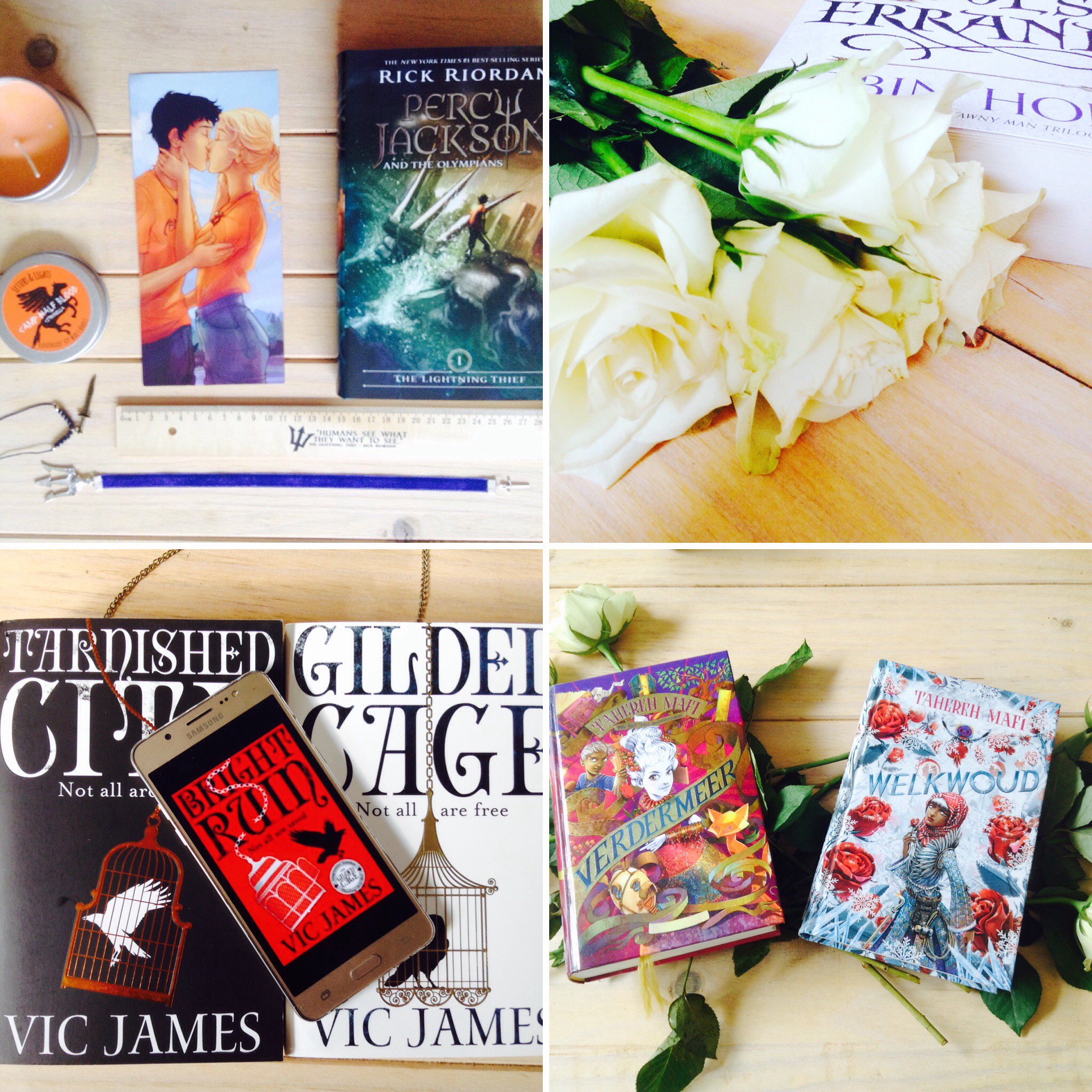 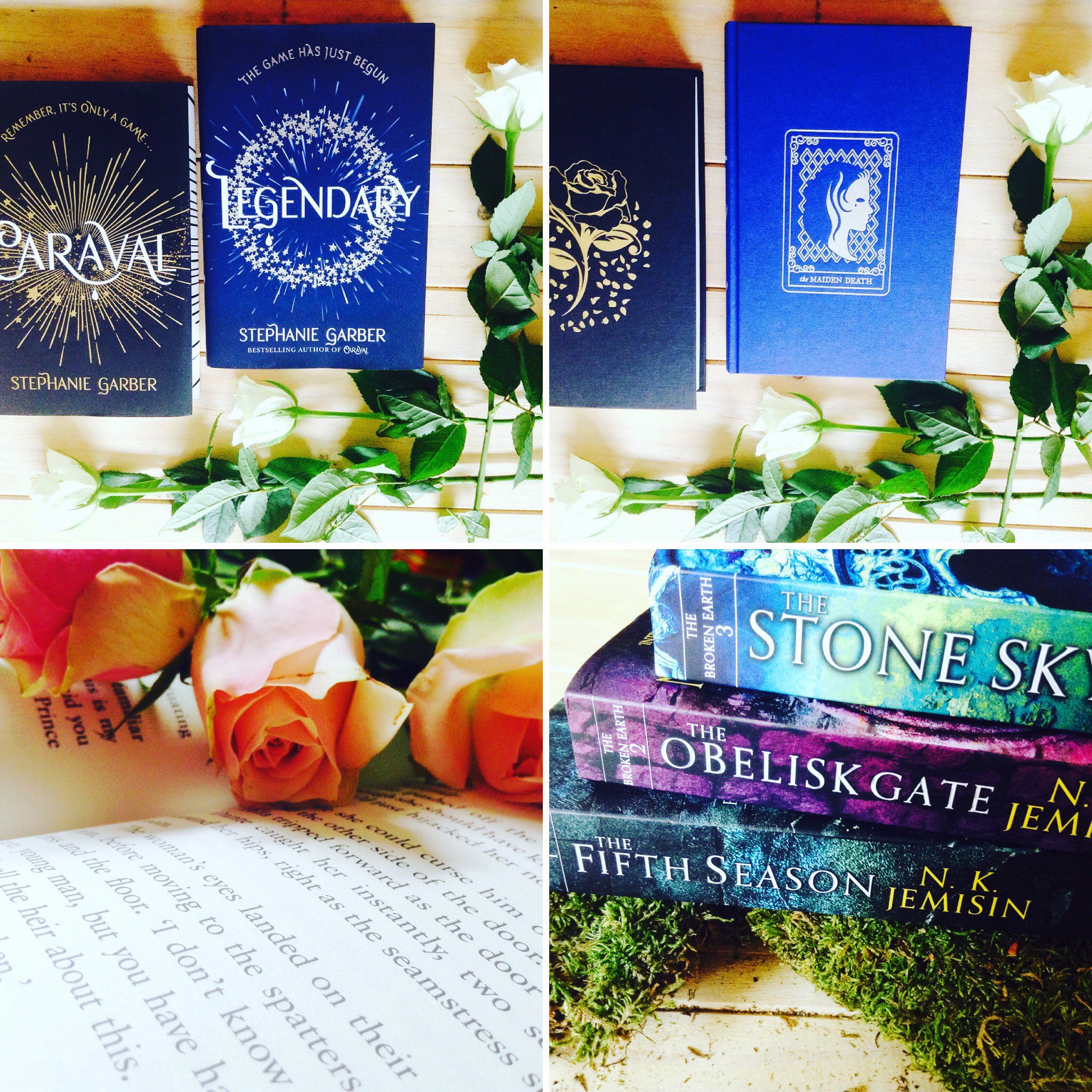 ⌘ Cait from Paper Fury talks about how she got an agent and book deal. She also had a guest post where Alison shared the recipe for the cake from A Thousand Perfect Notes.
⌘ Krysta from Pages Unbound talks about how rereading can boost your blog. She also talks about how book reviews could actually boost your blog traffic.
⌘ Avery from Red Rocket Panda talks about themed TBR’s.  They also reviewed Yes, You Are Trans Enough.
⌘ Michelle from the Writing Hufflepuff shares some LGBTQIAP+ comics you should read. Here is part two.
⌘ Tina from As Told by Tina shares her audiobook habits.
⌘ Kristen from Metaphors and Moonlight shares 10 LGBT+ sci-fi/fantasy books by LGBT+ authors.
⌘ Manon from Cafe Manon shows how she created an illustrated map.
⌘ Aimal from Bookshelves and Paperbacks shared a masterlist of diverse books from july to December 2018.
⌘ Sarah from Dragon & Zombies has asked for some flintlock Fantasy recs. If you have any please leave her a comment OR check out the other comments for recs.
⌘ Emma from Emma’s Library talks about misconceptions concerning d/Deaf.
⌘ Alicia from A Kernel of Nonsense has the summer 2018 comment challenge going on again. For August the sign-up goes live on July 2nd! Don’t miss it! For July I have been matched with Nicole from Erlebnisse. It looks like it is going to be a fun month!

⌘ Emmy from Zon en Maan shares what it takes to create one of her themed goodie boxes.
⌘ Marcia from Oog op de Toekomst shared seven Dutch science-fiction books on her to read list.
⌘ Vivian from The Book Review talks about the importance of Disability Diversity.
⌘ Liz from Pluizenbol shares what she is good at as a book blogger.
⌘ On Ogma Tineke’s daughters reccommend a few books.

⌘ Chelsea from ChelseaPalmer let her goats pick her tbr. 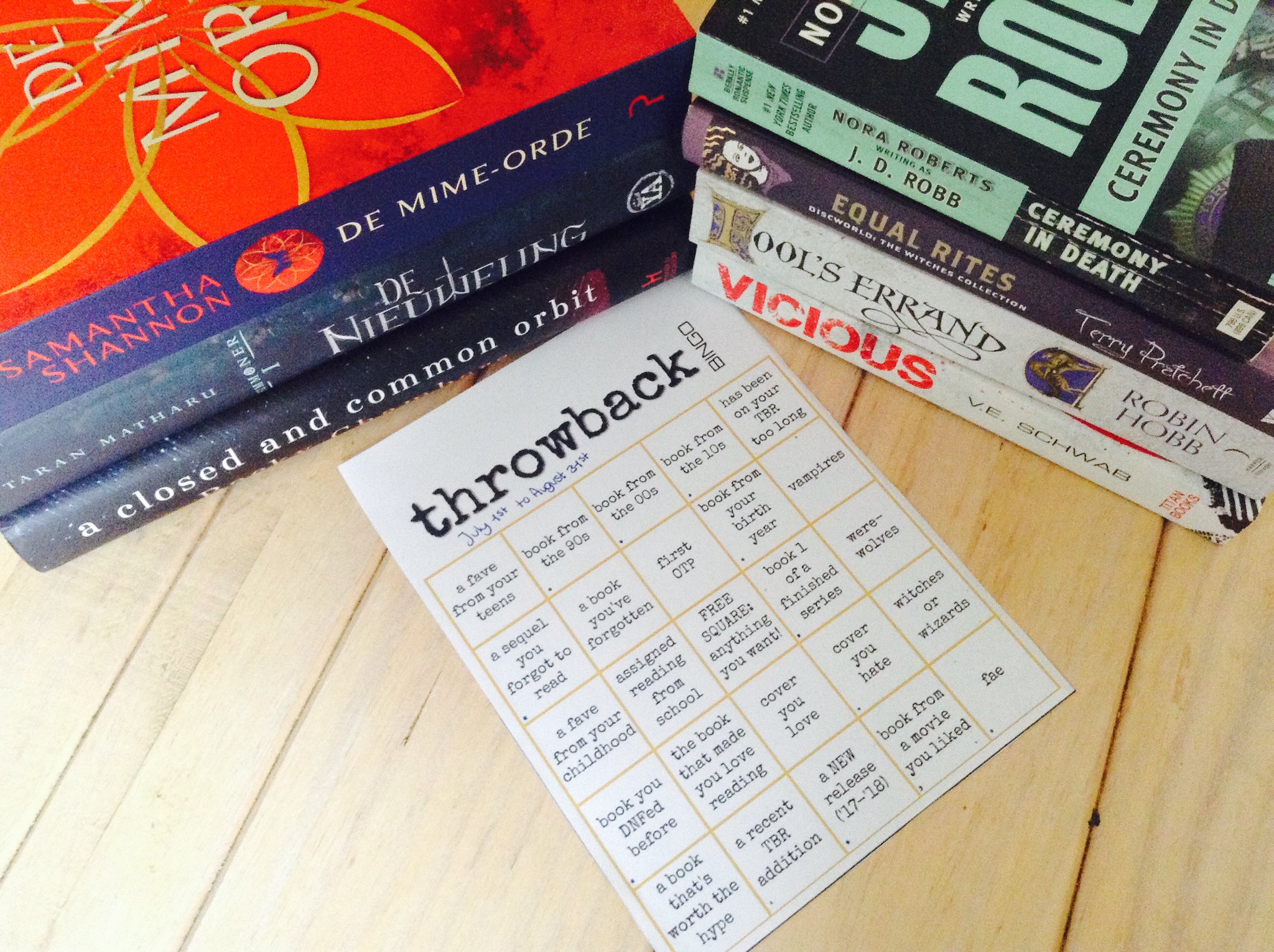 ⌘ For July and August I’ll be participating in Life & Lit’s Throwback event with the bingo. Life & Lit is a facebook group and Destiny from Howling Libraries is the admin. It looks like fun and I am focusing on backlist reads anyway. These are just some options that work with the bingo.

⌘ Other than that I’ll be reading at least one review copy. And I am for sure reading A Close and Common Orbit with La La in the Library. And if we all get our copies on time I am also buddy reading Record of A Spaceborn Few with La La in the Library, Greg from Greg’s Book Haven and Jolene from Jo’s Book Blog. Otherwise it will be in August. As you can see I’m kind of keeping my tbr open more now as I clearly was having a lot of problems with reading in June, hence all the comis, so yeah.