April was the month where we had some ups and downs. We had some Summer weather, some colds, some naughty toddlers and overall some average reading. I guess you can’t have everything. 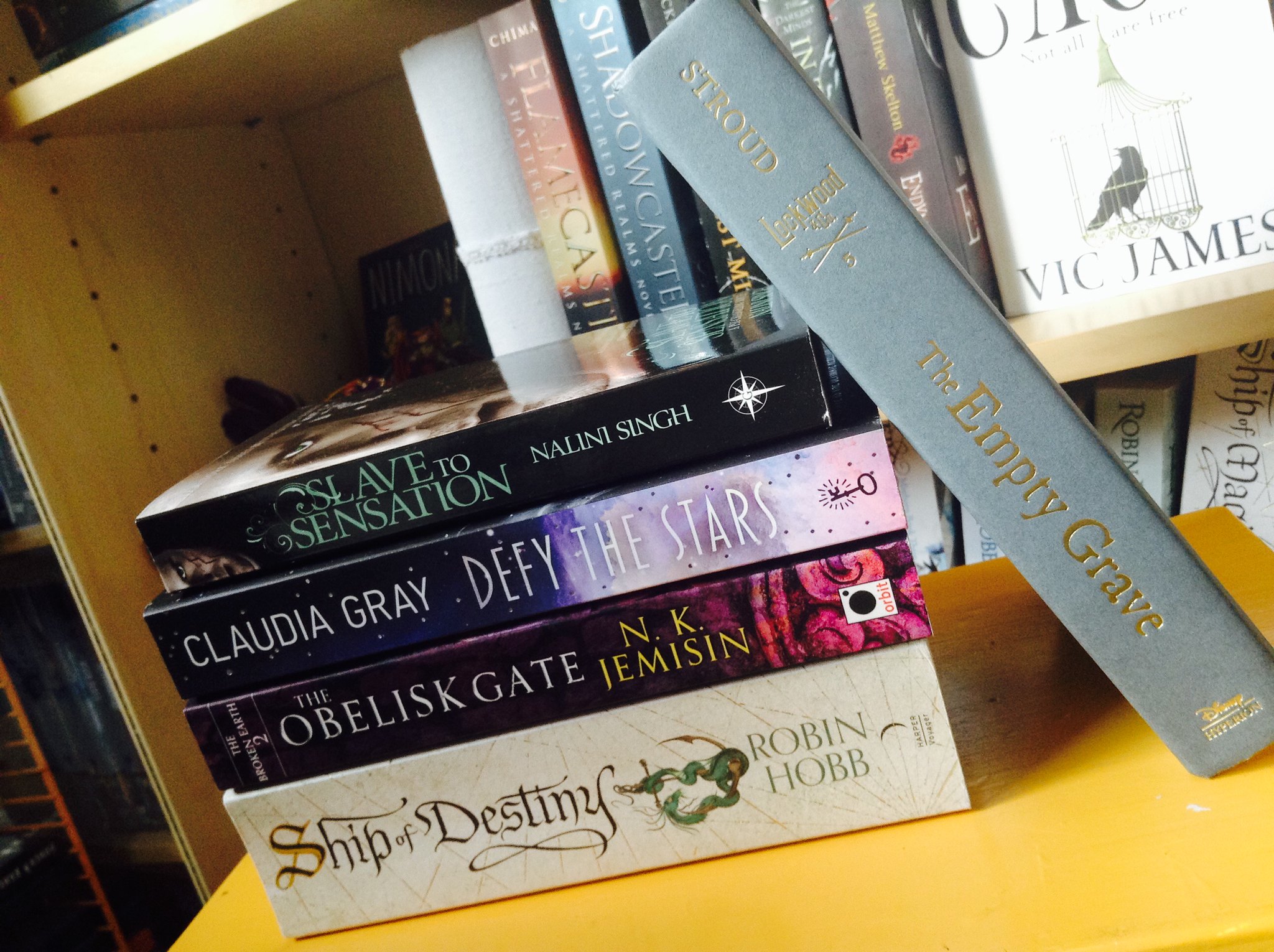 I obviously hit my reading challenge goal. I’m not going to up it as I don’t really want the added pressure but I could easily up it to 100 if I wanted too.

*screams into the void*

I now upped this to 48 as a goal, level 4 library addict.

How Was April for Me?

⌘ This month started once again with losing my voice for a small week and with a terrible cough at night. Sleeping was not fun. I had to yet again cancel my volunteering and I am quite honestly so very done with this. It just feels like I have a virus that I can’t get rid of and just magically appears at the start of a new month? If it is like this again in May I’ll probably ask the doctor because it is ridiculous.

⌘ We celebrated Maarten’s birthday on our own and had Easter straight after. It was nice to have a few days together without feeling forced to go to family for a change.

⌘ The weekend after that Merijn stayed at his grandparents from Saturday 11.00 am to Sunday 3.30 pm. So more than 24 hours away from mommy. I was fine with that and he did fine while there. But he was happy to be back with me (lots of cuddles and kisses since) and I was happy to have him back.

⌘ That Sunday afternoon we celebrated Maarten’s birthday with family and as it was some great weather we could sit outside. My parents also came and stayed with us until the Wednesday after. So to say I was quite whiped afterwards would be an understatement haha.

⌘ We got some pretty great weather this April! A few days felt like super summery. Hitting 30 Degrees. But we went back to 10-15 Degress for the end of the month.

⌘ The big change in temperature made all three of us have a cold. So much fun. And at the same time it was that time of the month and I got hit with a terrible back pain for most of that week.

⌘ Merijn hasn’t seemed quite himself the last half of the month. He either hangs on me or has quite some temper tantrums. Playing alone is also not a thing at the moment. I’m hoping this is just a phase. A very short one. Fingers crossed.

⌘ At the start of the month I started using Feedly and I like it so much that I’ve stopped using bloglovin’ all together. The only downside is that you can’t claim your blog so you don’t see who follow your blog on feedly. But on the other hand that is kind of liberating. The follow counts for blogs do tell me how little book bloggers still use Feedly though and that is a shame.

⌘ At the end of the month I realized that with the updated European privacy law coming at the end of May I also had to do some things for my blog so I have been scrambling with that. It is actually up at this point (technically went up on may 1st but deal with it).

⌘ I haven’t felt much like replying lately and there are some posts I’m probably not going to go back to for replies but just know that I appreciate every comment. ❤

Other Posts
Dancing out of March 2018 / Unboxing – Celebrate Books Percy Special / Why Historical Fiction Scares Me These Days (Confession) / Monthly Monday Book Shelfie #1 / Book Haul #31 – The Rest / IWBM #3 – My Dream Library / Can I Be Wonder Woman? Or Should I Travel to Narnia? / Contemporary Books This Fantasy Lover Wants to Read / Spring Has Sprung /

⌘ Ice Age:  The Great Egg-Scapade / Movie
We watched this for Easter with Merijn.

⌘ Tomb Raider 2018 / Movie
On Easter Sunday we were surprised by my brother in law and his girlfriend who kicked us out of the door to go see a movie for Maarten’s birthday as they watched Merijn (who was already down for the night). With so late notice we ended up going to Tomb Raider which was entertaining. The music was so over the top in places though and some things didn’t entirely make sense.

⌘ Zootropolis / Movie
This was so cute. The ending missed a bit of a punch but I would totally watch a second one with these characters.

⌘ Black Panther / Movie
We loved it. I fell in love with almost all of the female characters. It is not perfect but than neither are any of the others. I am certain we are buying this on dvd as soon as it comes out and then will rewatch it many times.

⌘ Coco / Movie
Oh I loved this too. The family feeling and the fact that is actually takes place in Mexico ❤

I notice that with missing the first 3 eps I feel like I missed the basis and it is harder to hold my attention. And I guess they are having the mid season wait here in the Netherlands because now they’ve stopped showing them. Ugh.

⌘  Agent Carter / Season 1 / Ep 1-8 / Completed
⌘ Agent Carter / Season 2 / Ep 1-3
Like a month ago we got offered a free extra package (for a few months) for the tv from our provider which we obviously took. And through on demand I can see Agent Carter. I was not a fan of her in Captain America, but I really like her wit and banter in this show. There is so much still to figure out. The second season so far really doesn’t live up to my expectations however. 😦

⌘ Swetlana from Caffeinated Bookworm shares 8 reasons to read backlist titles.
⌘ Cait from Paper Fury talkes about the do’s and don’ts for Autism rep.
⌘ Jamie from The Perpetual Page-Turner talkes about her not so instagrammable life. And shares 11 ways to spring clean your blog.
⌘ Lena from The Printed Girl shares 10 reasons why she will not reread a book she loved.
⌘ Chloe from Blushing Bibliphiles shares how to get e-arcs.
⌘ Norrie from Reading Under the Blanket lists 20 books to satisfy your dystopian cravings.
⌘ Deanna from A Novel Glimpse wrote a list of New Adult books to help you figure out where to start in that genre.
⌘ Holly from Nut Free Nerd talks about the 1995 BBC Pride and Prejudice adaptations in her Feminist Fridays.
⌘ Brianna from Pages Unbound shares how to rock bookstagram on a budget.
⌘ Aimee from Aimee, Always made a list of what to include in contemporaries with POC representation.
⌘ Marta from The Cursed Books talks about why trigger warnings are important.
⌘ AJ from Read All the Things is going to be the best fantasy author with all of these titles!

⌘ Emmy from Zon en Maan talks about why retellings are so popular.
⌘ Joany from Craving Pages made a list of book blogging sources amongst the dutch/belgian book bloggers.
⌘ Liesbet from Zwartraafje made a list of english book titles that end up feeling like an interrogation... She also got to interview Taran Matharu from The Summoner series. Below the Dutch one it is also in English!
⌘ Mirjam from Ogma shares New York Must Sees for bookworms.

⌘ Next month is May and that means it is our 4 year wedding anniversary, my 3 year blog anniversary and Mother’s Day. Yeay I think. I’m hoping it will be some better weather again, like around 20 Degrees though that is wishful thinking haha.

⌘ Reading wise I am hoping to read about 15 books or so this month. I seem to have stacked up on 4 review copies to be read in May. I also want to finish The Broken Earth trilogy, reread Simon vs and read Leah on the OffBeat, and there is also The Burning Maze that came out on May 1st. So many books, so little time.

⌘ This month is Wyrd and Wonder, the fantasy month so I am participating in that. I am trying to participate in the bookstagram challenge and I will publish some posts for it which you should have seen one of already go up.