February was NOT the month I thought it was going to be. Between the flu, losing my voice and some other things I ended up having to cancel almost all of my appointments and the last week and a half were pretty bad reading wise too. Also I had too many library books and still did not make a dent in my tbr. Boo. 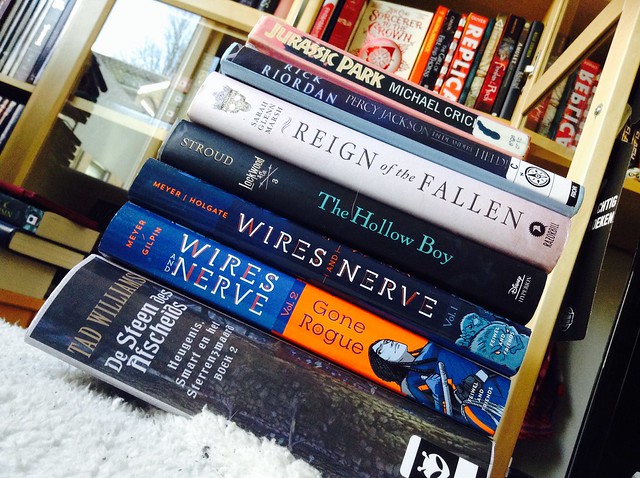 Do not be fooled by this number. There are a lot of graphic novels here! I really should not complain about the number. It is pretty decent. 😉

A book that was in my unhaul made its way back to my tbr. Lesigh. Lets not talk about the rest, okay?

I clearly should have gone for my initial feeling of 24 for the library love challenge. I’ve upped it to that halfway through the month when I already hit 10 library books. I’m trying to slow down a little because I would like to read some more of my physical tbr. And that is obviously not going so well since I have been prioritizing library books. Oops.

How Was February for Me? 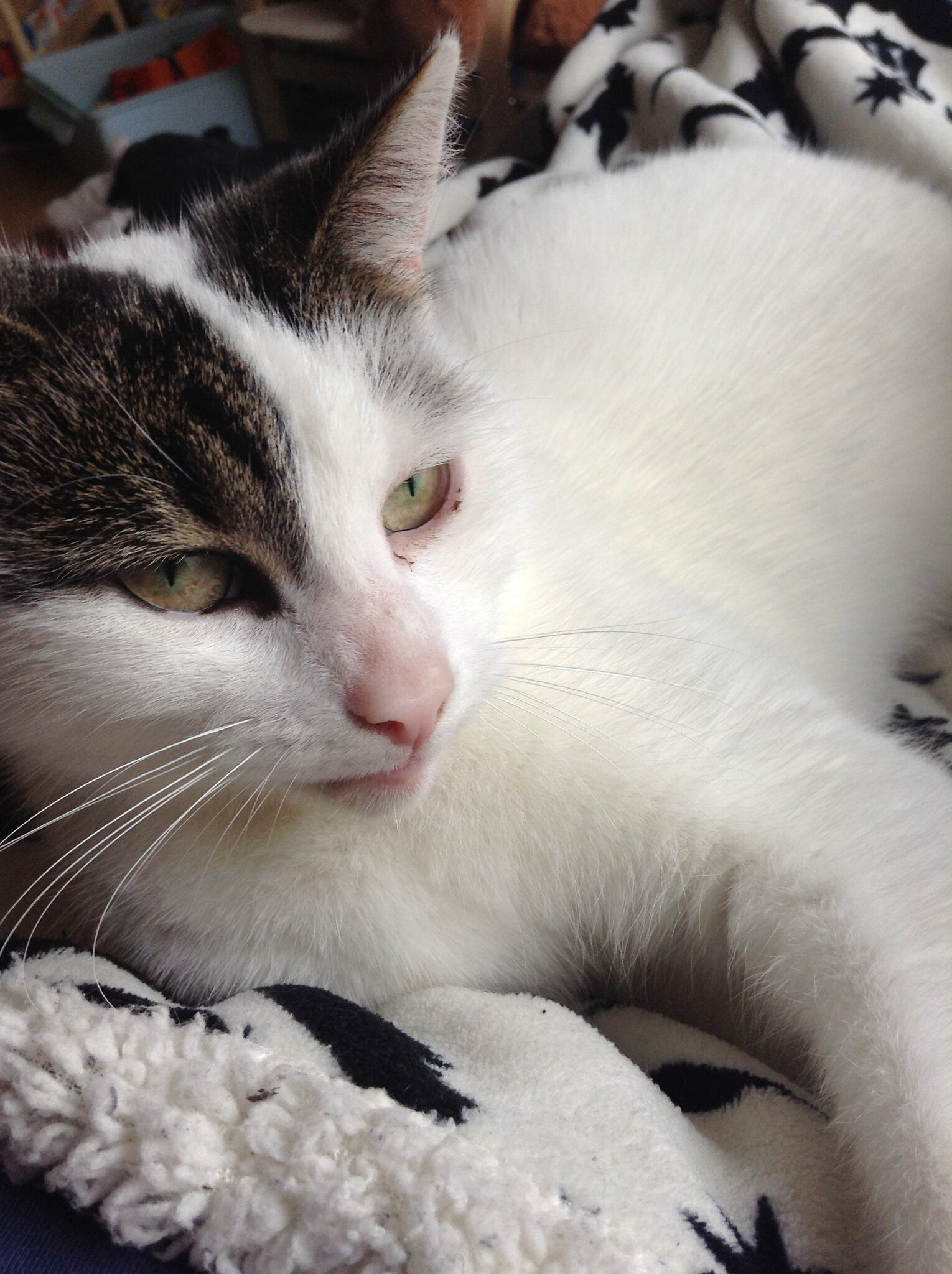 ⌘ The first night of February was terrible with little sleep. I was exhausted the first of February as was Merijn . I guess it could only go up from there right?

⌘ On the third of February Merijn had a grandpa day and at the end of it (well 5.00 pm since we can’t eat to late with Merijn) we went out to dinner from grandpa’s birthday that was on the fourth. We went to a tapas bar. It was a lot of fun. Merijn had no problem with sitting in a chair there for 2,5 hours as long as he got some food. He ate so much that he barely ate anything for breakfast and lunch the next day, haha.

⌘ The week after that though I lost my voice on the Thursday. I had to cancel volunteering and my night out with the ladies at the library in Zwolle. It sucked it and not having a proper voice sucks with a todler.

⌘ I did end up going to the book presentation at Westerhof in Zwolle for two books released by Dutch Venture Publishing. One by Miranda Peters and one by Sarah Dalton. I got both books with a slight discount. Miranda signed the book herself and since Sarah is English (and was only there by video conference) we got a book plate with the book. It was a lot of fun to see some of the girls again who work at Westerhof like Odette and Evelien. But with my voice being gone it was also a lot of awkwardness…

⌘ The day after that I managed to hit my elbow on the thing in the wall that the latch for the staircase gate has to go into. HOW I managed this I will never know but it happened as I was carrying Merijn downstairs and OUCH. It was bruised and hurt a lot for a while. Fun when you need to be able to pick up a toddler. Not.

⌘ I made a page to showcase my favorite book of each blogging year. You can see that here. I also made the background in the theme light green. Not entirely sure if I like it or not. I’m also thinking about switching things around a little again with my book reviews. You might have seen I changed the written ratings to actual stars (thanks Aimee!) but I’m thinking on changing the order of some things as well. 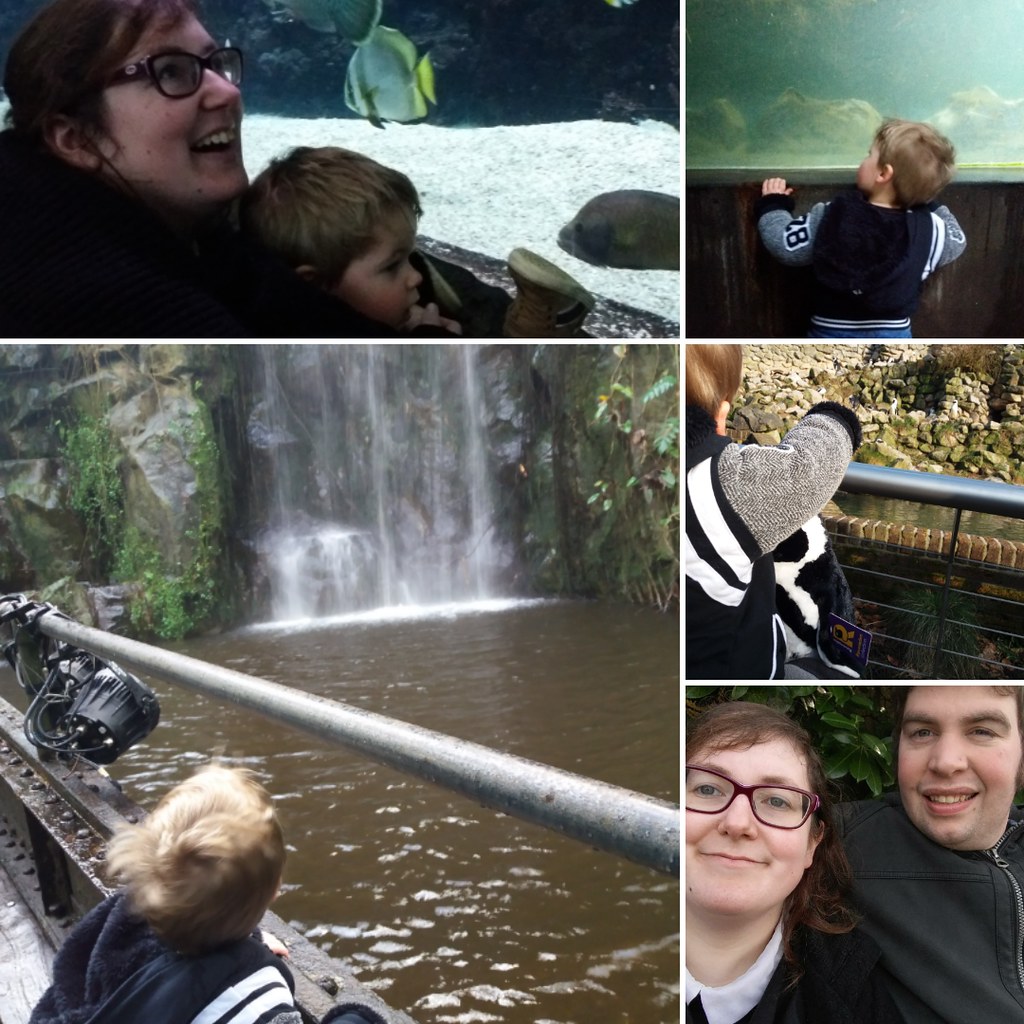 ⌘ This month my husband and I met each other in real life ten years ago so we took Merijn to the zoo. Even without Merijn we loved going to the zoo. This was such a last minute decision though, haha. It was really cold and a lot of animals were in their inside habitats because of the cold. Even so it was fun and Merijn clearly loved the penguins.

⌘ Merijn caught a bit of a stomach flu. He had never slept in bed with us before that night. But he is a good kid and hasn’t complained about going back to his own bed which is what I’ve always feared if we did do it once. But yeah, poor thing was pretty sick for a bit.

⌘ And then of course we ended up with the stomach flu. Fun. But at least husband was home for a few days in a row. That hasnt happened in a while.  But I had to cancel volunteering again and couldn’t go to the birthday dinner of a friend. 😦  I also had a craptastic headache during it and since there was also Merijn to take care of there was basically no reading done. How do other people get to read so much when they are sick? I do not get.

⌘ Merijn had his check up again. Before he was often above average weight wise but lagging behind a bit in his length. But he grew a lot since November and hasn’t gained that much weight so he is completely within the average lines now. I never cared much about the weight but I did think about the length since I am not tall at all (and that is an understatement). I was teased (also an understatement) with that a lot when I was younger so yeah… But he’s clearly lost his baby fat. You can see it so well in his cheeks.

⌘ My friends twins turned one at the end of the month so we also went to visit them with presents of course on the last day of the month. Fun to slowly see some more interactions between Merijn and the twins. 🙂

⌘ The last few days of February were so cold! But we got some snow which was pretty great. 😀 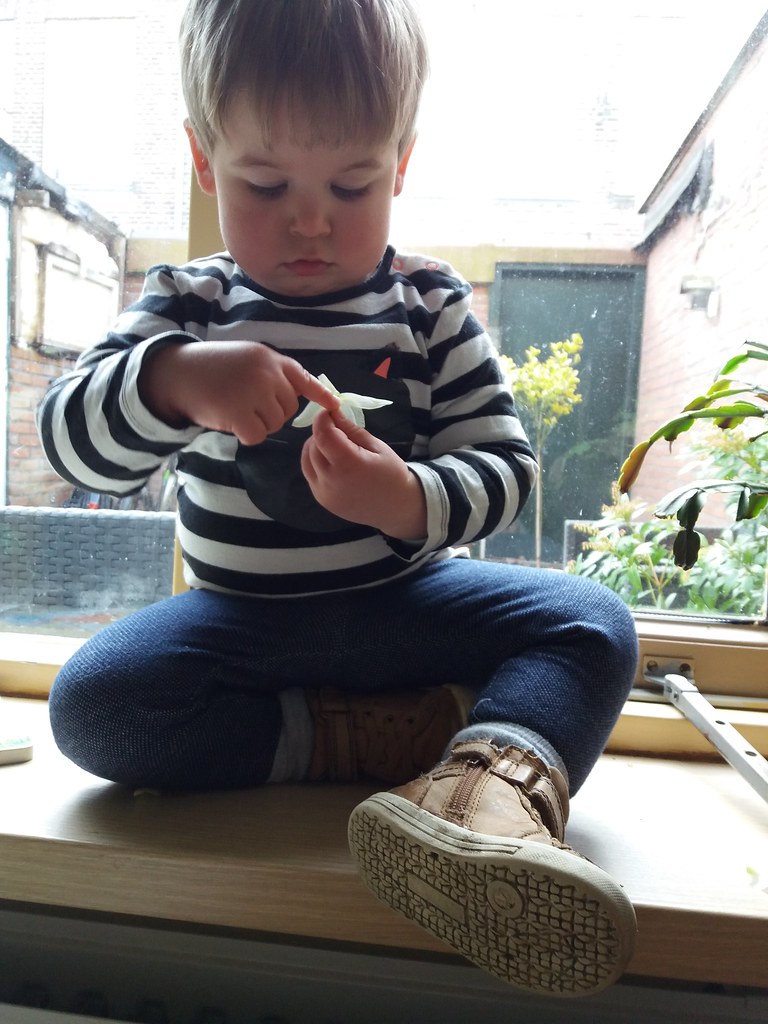 ⌘ This guy is now 18 months and as you can see is climbing on everything.

⌘ X-Files Essentials / Season 1 – Ep 13 and 24 / Season 2 – Ep 2 / Season 3 – Ep 4
As you can see the jumps in these episodes are getting bigger and honestly, it doesn’t help with keeping my interest as it is hard to get attached to characters when you miss so much.

⌘ Iron Man 3 / Movie
I think it was an okay ending to the Iron Man franchise but the first movie always will be the best.

⌘ Power Rangers / Movie
Ah I quite enjoyed this. I love the characters and their interactions and there really needs to be a sequel.

⌘ Cardcaptor Sakura: Clear Card / Anime / Ep 1-2
After reading the first volume of the manga I immediately searched out the anime and knew I needed to watch this too. I loved it though not as much as the manga.

⌘ Winter Olympics 2018 / Sports Event
This is probably not a surprise. I mostly watched speed skating and shorttrack as that gets the most attention on the tv here and I am obviously more interested in speed skating. A lot of it was also during Merijn’s naps so that helped haha. We did pretty well! So happy for some of them. 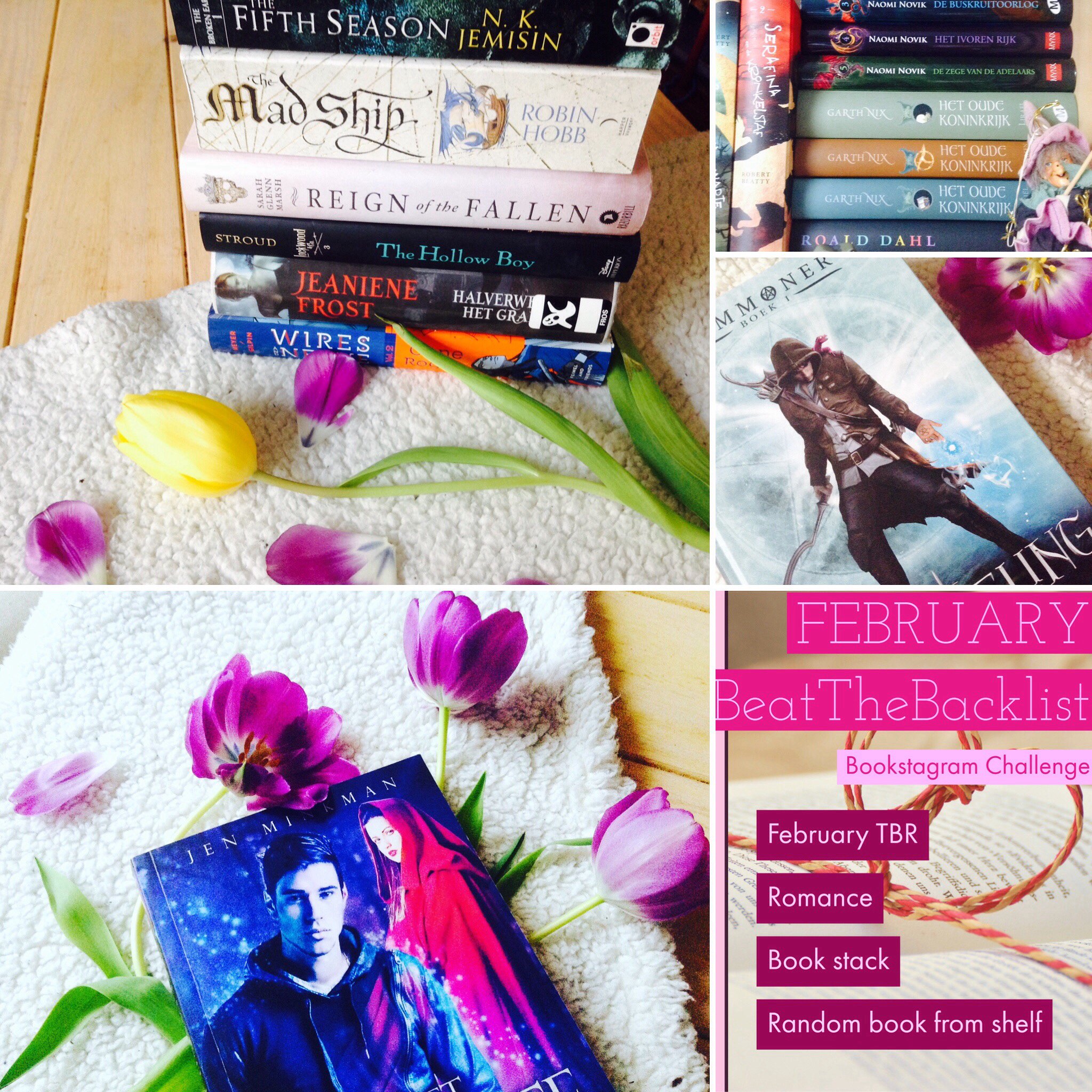 ⌘ La La in the Library talks Gollancz covers in this cover conversation post. ❤
⌘ Daniela from Nocturnal Devices gives the room for a discussion if we should have black history month inspired by what Morgan Freeman recently said about it. In the same post she also shares some great reads for black history month.
⌘ Austine from Novel Knight made the Book Community Media Dashboard where you can add in all your links.
⌘ Kristen from Metaphors and Moonlight shares how to use Feedly and why it is her favorite.
⌘ Lyndsay from Motherly shares 5 signs that your kid is already interested in reading. Merijn for sure does the first four.
⌘ Mallory from She is Bookish shares six reasons why books get lost in her tbr pile.
⌘ Jolien from The Fictional Reader talks about loving yourself and loving others.
⌘ Imryl from X+1 annoucnes Wyrd and Wonder, where in May all fantasy will be celebrated. Come sign up! Here is a schedule where you can add in the posts you are planning on doing.
⌘ Lindsey from Lindsey Reads talks about online friendships.
⌘ The Oran-Utan Librarian shares their love story with Pratchett so far.
⌘ Aimee from Aimee Always shares 5 ways to style your book review.
⌘ Chasing Faerytales interviewed Sarah Glenn Marsh, author of Reign of the Fallen.
⌘ Dina from Dinasoaur sums up her personality with books.
⌘ Krysta from Pages Unbound shares 5 bookish misconceptions.

⌘ Vivian from The Book Review talks about school libraries and reading counsilors.
⌘  Annabel from Het Leven van een Boekenworm responded to The Book Rec Tig-Tag 2.0 (as created by Zwartraafje) where I tagged her for here, and recced me some books.
⌘  Lisa from Leave No Story Behind shares a few things that after 4+ years of blogging she still isn’t good in doing.

⌘ Reading wise I will try and get maximum of 1 book out of the library if I see one I am dying to read or something along those lines but I would like to focus March on my own books. 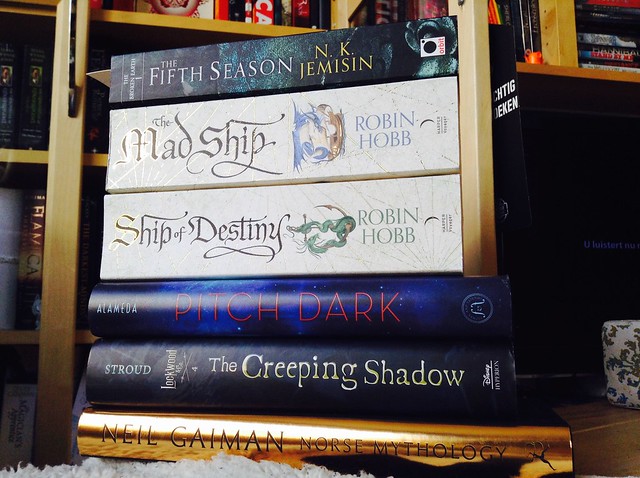 ⌘ TBR: Finish The Fifth Season with Alica from A Kernel of Nonsense / The Mad Ship / The Ship of Destiny / The Unseen / The Hummingbird / Pitch Dark / The Bear and the Nightingale / Lake Silence / Norse Mythology / The Creeping Shadow

⌘ As for other things, we will be going to be parents for the weekend next weekend. My dad’s birthday is actually on the day this posts but we couldn’t go today. Maarten also has his birthday on the last day of the month in Easter weekend plus the weekend there is an event happening in our city so that will be busy lol.