The last month of December felt a little crazy to me. Little sleep, teething, toilets, snow… 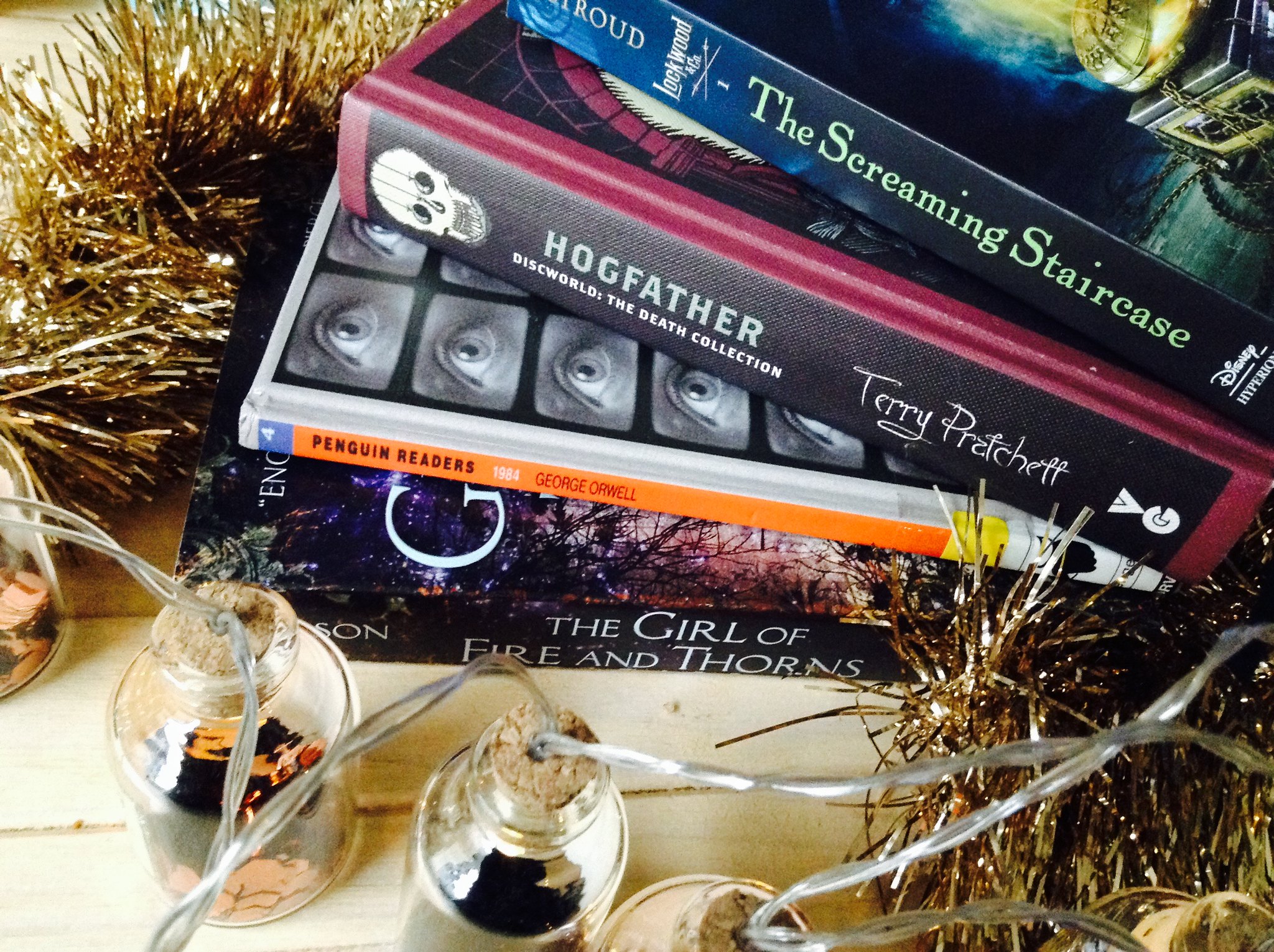 Honestly I completely forgot about this and did not keep track of it at all. Just a lot of things going on.

I shall keep my end tbr number a surprise for my goal wrap up tomorrow, haha.

How Was December for Me?

⌘ On the first of the month we went to this mommy cafe where they talked about doing yoga together with the kiddies. It was fun to meet other moms this way. It was a small group. 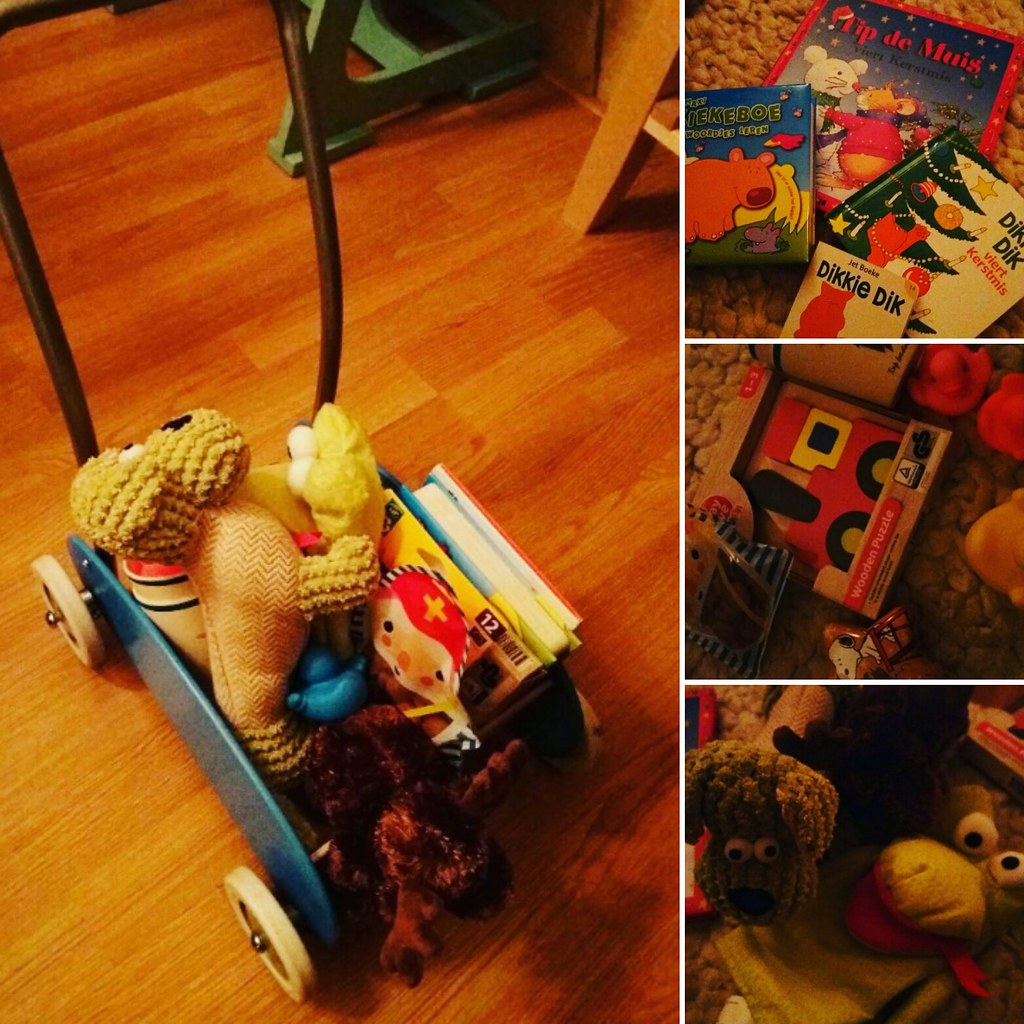 ⌘ We celebrated Sinterklaas December third. Merijn got so spoiled.

⌘ I met up with a friend on the eight and we went to the library sale. As you could see in the book haul, there were books bought. And she bought me a book as well. ❤

⌘ In the week of the eleventh we got our toilet done. Since it was going to be messy and all, I went to my parents with Merijn. It was the day it was going to be terrible winter weather with the snow and off I went in my little car with a 15m old for the usual 3 hour drive. It turned into 4 hours which was really not that bad. I’m glad we left in the morning and not in the afternoon which I had intially planned so we got less snow along the way. It was pretty doable that way even though everyone told me not to go, haha. I can drive safely through snow  people. Woohoo.  (And this is a thing because the last time it snowed and I did that trip alone, back in January 2013, I spinned of the highway.)

⌘ Merijn and I got spoiled at my parents but I had no concentration to read while there. Merijn had very little either since he barely touched his books. Too many triggers. We also met up with my cousin who has a son 2 weeks younger than Merijn and they got to play a bit. We might do it again in the future.

⌘ Merijn was teething during this week and the next. Insert tired mommy. I had even worse nights than he did…

⌘ The drive back on the Friday was terrible because a big highway was closed of because of a big accident with a truck and two cars. So I had to go the long way around. Merijn woke up early in the car. And was mr grumpy because of it nearing the end and before dinner. 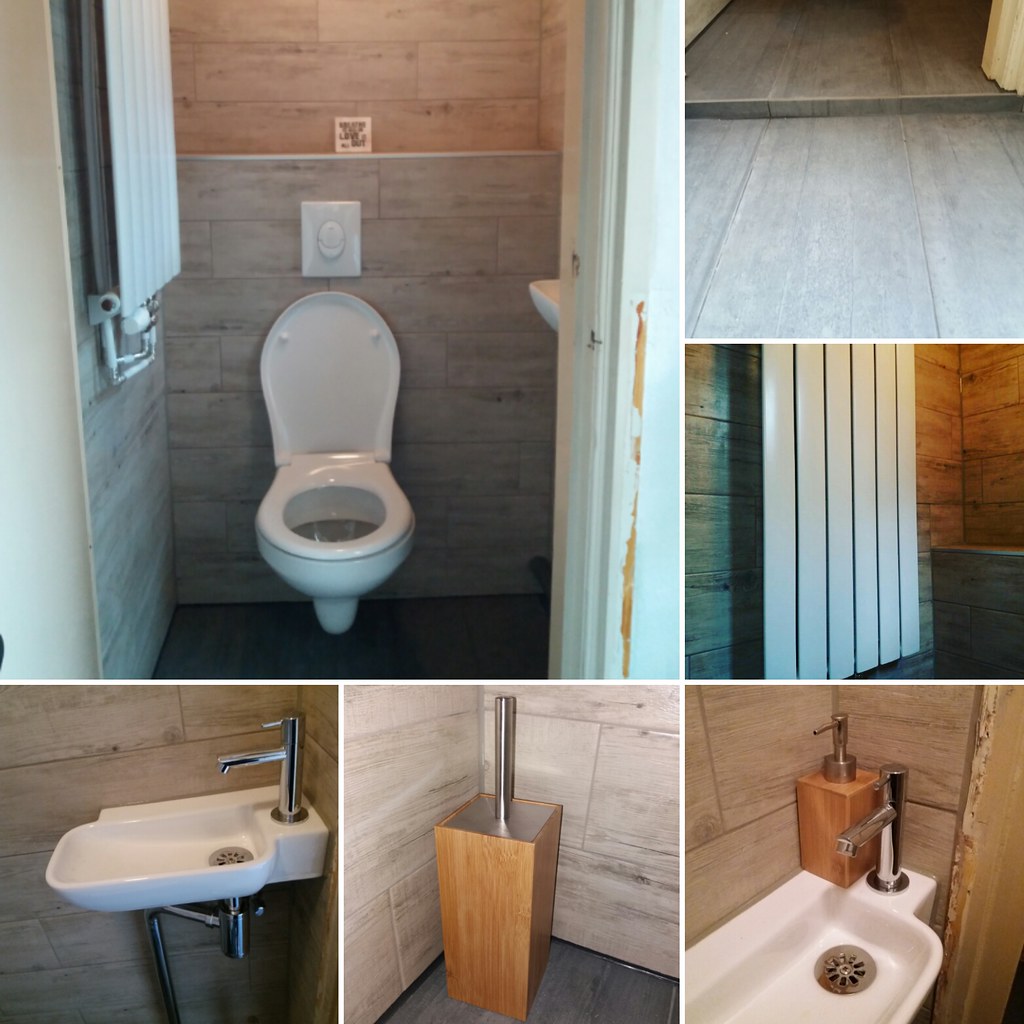 ⌘ Here is our new toilet. We still have to put in a new ceiling and do the window and door. But my hubby really wants to do it. Want to guess how long that will take?

⌘ The Saturday after we had problems with our heating though at the front of the house. My husband aired them out and went to refill the tank and instead flooded our kitchen. We had to call a professional who helped him out on the phone. Ugh. Such a mess. At least hubby cleaned it himself. Merijn also toppled backwards twice during the whole mess as I tried to keep him away from the water but also help hubby and ugh. Just ugh.

⌘ The week after that (which was the week before Christmas) I was feeling a bit meh to be honest. I think it is just all the festivities, but having to wait until the days actually come and hubby having to work a lot. Also all the money that you spend during these days and obviously the toilet also cost us. There is just so much more stress in December and I think it kind of came out like that.

⌘  Christmas was mostly okay. Merijn was very hyper. I forgot my meds first Christmas Day. All three of us got spoiled a lot with the presents from Santa.

⌘ The teething saga continued with even worst nights these last few nights of 2017. But there was also a bit of fever so who knows what is up?

⌘ Tonight is New Years Eve. What are your plans? We are staying at home. Watching some tv. Maybe I’ll try and read and get a headstart on the first book of 2018. 😉

Other Posts
Book Haul #26 – The One Where I Barely Bought Books but Still Got a Lot // Dancing out of November 2017 // Beat the Backlist 2018 Sign-Up // #ReadersCrossing Sign-Up – Come Camp at My Campsite! // Goodreads Choice Awards 2017 // ‘Tis the Season To Be Jolly, Tralalala // 14 Bloggers Share Their Christmas Reads // Book Haul #27 – Library Sale and Christmas

⌘ Once Upon a Time in Wonderland / Season 1 / Episode 9-13 / Completed
I am glad we got to watch this because I do like the Knave but I don’t think this is one we will buy on dvd to rewatch.

⌘ The Flash / Season 2 / Episode 16-23 / Completed
I feel so conflicted about a lot of this. I am not happy with that ending, that is for sure. Just when you think Barry learns, he goes and does somethign like that…

⌘ Miss Peregrine’s Home for Peculiar Children / Movie
I thought the movie was okay. The ending was a lot more exciting than I remember the book to be haha.

⌘ A Christmas Carol (1999) / Movie
This is the one with Patrick Stewart. It makes me remember I appreciate him so much.

⌘ Harry Potter: A History of Magic / Documentaire
They showed this on the BBC during Christmas and I watched it. Not that I actually saw a lot as a cat and a kid were being annoying…

⌘ The Gruffalo / Movie
We have not yet read the book but we have seen the short movie. Yeay for us.

⌘ Tinkerbell and the Pirate Fairy / Movie
I actually own the first three or so, haha. But I didn’t catch up with all the new ones. ._. It was okay.

⌘ NovelKnight is hosting Beat the Backlist again in 2018 though slightly different. Come join the fun. I’m in team #novelknights! Austine also talks about having multiple social media accounts and the struggle.
⌘ Jamie from Books and Ladders featured 10 instagram accounts that have under a 1000 followers and one of them was mine. She is also hosting the #2017throwback reading challenge in 2018.
⌘ Shannon from It Starts at Midnight shared books she loved but that have low ratings on Goodreads.
⌘ Michelle from The Writing Hufflepuff is sharing some bloggerlovin’. Throughout December she posted multiple posts to share some bloggers she loves. Including me in this one.
⌘ Tina from As Told by Tina is hosting the #LetsReadIndie 2018 Reading Challenge.
⌘ Nicole from Feed Your Fictin Addiction and Shannon from It Starts at Midnight are hosting the 2018 Book Blog Discussion Challenge. Nicole also shared a list of other 2018 reading challenges. She also talks about why she can’t seem to read lately. And she discusses why she likes some books better as audiobooks.
⌘ Kristen from Metaphors and Moonlight shares a list of 10 fantasy/sci-fi Christmas reads. She also shares her 2017 reading stats.
⌘ Maraia and Sebastian from Buchermonster wrote a piece about why not getting arcs is not a blogging death sentence.
⌘ Jamie from The Perputual Page-Turner is doing the 8th annual End of the Year Survey! She also compiled a list of 42 books being turned into movies next year!
⌘ Dani from Dani Reviews things is hosting the#aseriesamonth2018 reading challenge.
⌘ Crini from All About Books shares how the hand lettering of As Travers as is on the naked hc of the collector’s edition of A Darker Shade of Magic came to be.
⌘ Cat from Let the Pages Reigh says she can’t write her own queerness which was an interesting read. She also talks about the downfalls of blocking.
⌘ Ayla from Books & Babbles shares how to take control of your goodreads to be read shelf. She also wraps up her 2017.
⌘ Sophie from Beware of the Reader talks about the things she didn’t know when she started blogging.
⌘ From January 16th Top Ten Tuesday will leave The Broke and the Bookish and move over to Jana from That Artsy Reader Girl. You can find the new schedule for the start of the year here.
⌘  You should totally join the Mental Health Book Bingo this January!
⌘ Jeann from Happy Indulgence shares a recent negative experience with an author.
⌘ La La in the Library has a cover conversation about Timekeeper.

⌘ Liesbet from Zwartraafje shared her experience with using a Rocket Book Wave book, where you can erase your writing of the page. She also shares the pros and cons of reoccuring blogging items/memes. And she shows us her work progress for Christmas cards.
⌘ Tineke from Ogma shares why she keeps rereading Good Omens.
⌘ Lisa from Leave No Story Behind shares her excuses to not have a book buying ban.
⌘ Annabel from Het Leven van een Boekenworm talks about herself as a blogger.
⌘ Priss from The Dutch Reading Society reviewed The Girl from Everywhere, the book we buddy read. 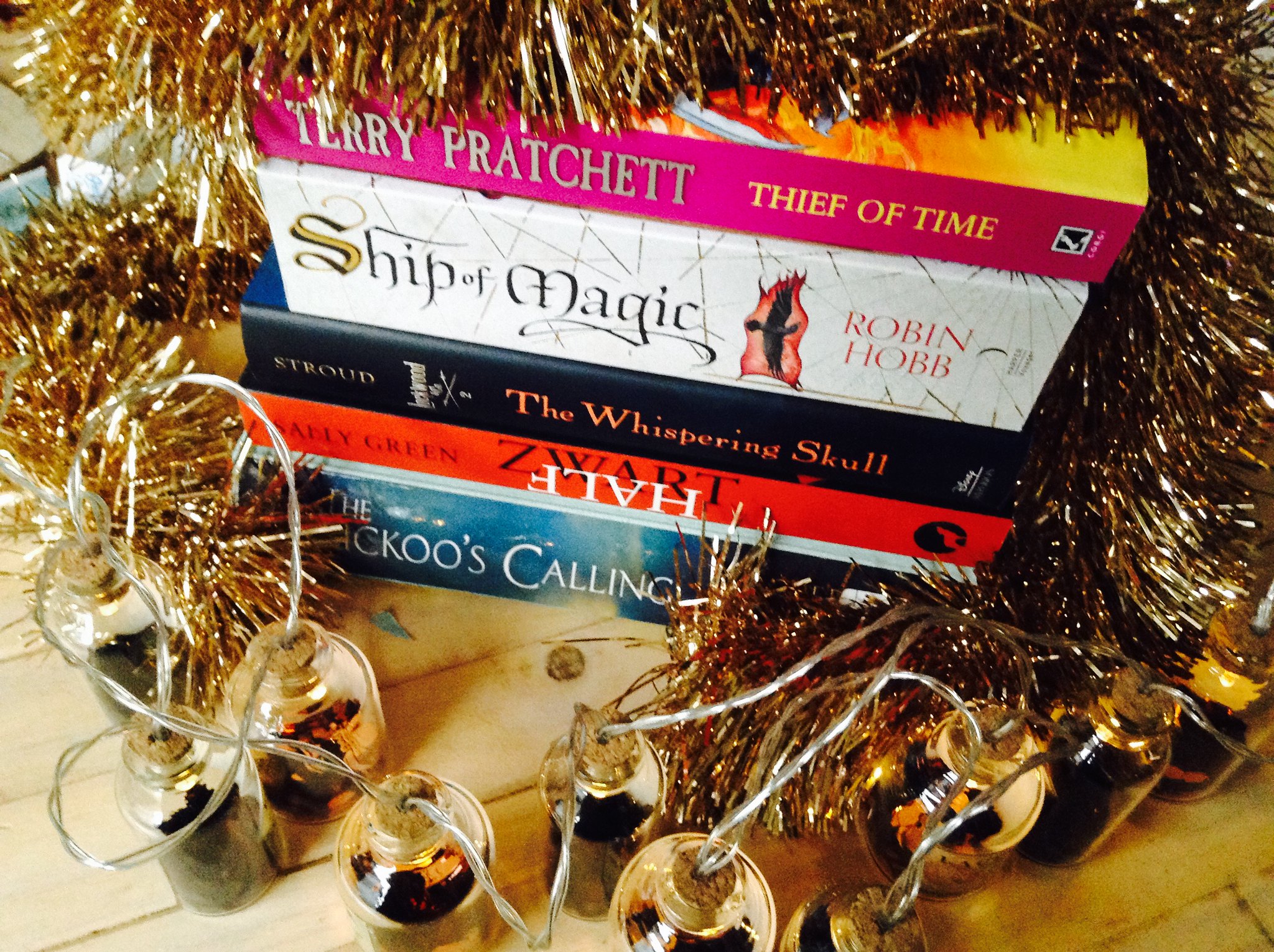 ⌘ Who even knows? Not me…

⌘ I would however like to read The Cuckoo’s Calling and I am hoping to start in that one New Year’s Eve. I hope to read Half Bad with La La in the Library next month as well as readalong with Ship of Magic for the Hobb readalong on instagram. I also want to continue my reread of Lockwood & Co. and would like to finish the Death arc of Discworld. Oh and I have two arcs I need to get to as those are released in January…

I wish you all an amazing last night of 2017 whether you like to spend it reading or partying. ❤