This month was filled with snot, the library, some harry potter things and a children’s holiday! The weather certainly turned a lot colder and the days are getting so much shorter. It really messed up my mood sometimes when all I saw outside was rain. 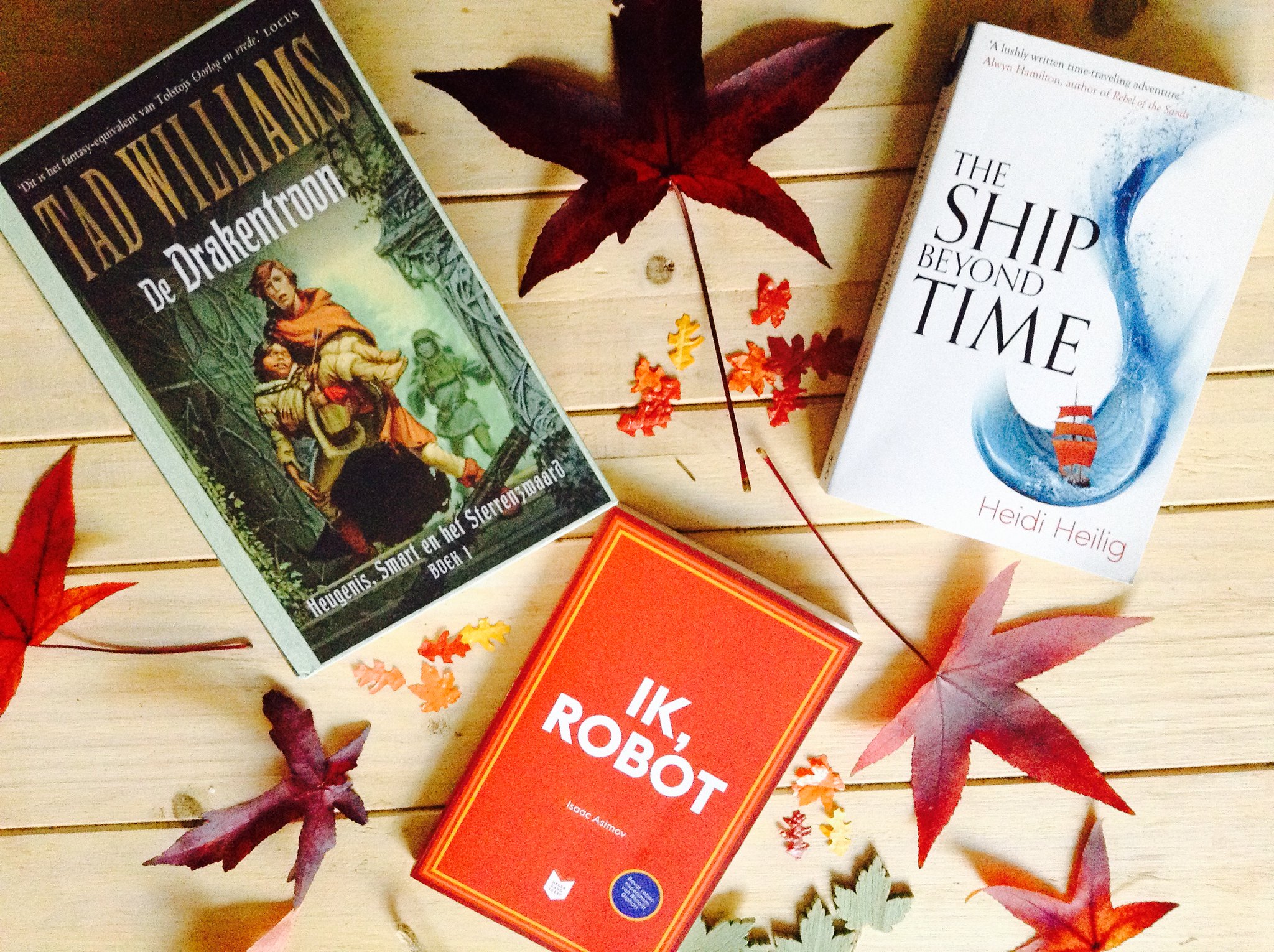 I only bought two of those 5 phsyical books myself… The others were from a giveaway and free book through the library… I’ve been good this month. But I also read 4 books from the library and some from my ebooks so I made so little progress here.

How Was November for Me?

⌘ The first full week of November wasn’t my week. I ended up with a bad cold that felt like my head was going to explode and lost my voice pretty badly. On top of that my IPOD died on me. I took all my bookstagram and blog photos with that plus put a lot of ideas I had during the day down on there. I also lost a bunch of Merijn photos so I was quite upset about it.

⌘ Luckily I have an amazing husband and not only did he get me pretty books to cheer me up but he also secretly took my IPOD to the Mac Help and got it resurrected for me. All the photos were still gone but I now have a working IPOD again and so I could take the pictures the way I wanted to again.

⌘ The third week my husband had a week off.  Because I wasn’t feeling too grant and my husband has been working a lot we didn’t do too much. He also started another internal education at his work so he had to go there on the Thursday. He did really well though on the tests he had to take to be allowed in so he should do well throughout again. 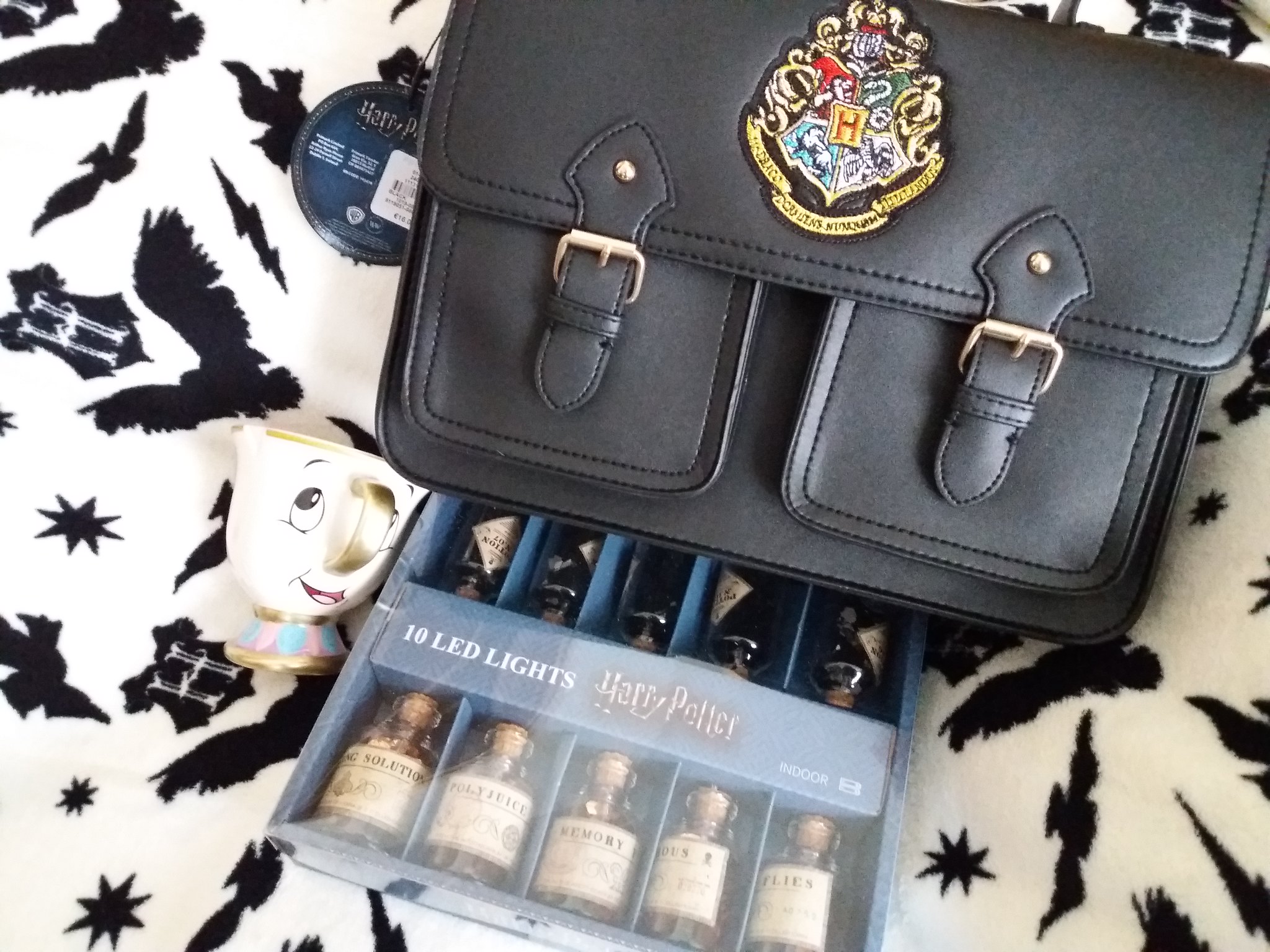 ⌘ But anyway we went to Zwolle a morning and of course we went into the Primark and I scored some Harry Potter stuff.

⌘ We also went out to dinner and left Merijn with his grandpa for the afternoon/evening.

⌘ Merijn is doing really well though he is really being a handful. Sometimes he just doesn’t listen at all. He learned how to drink from an open cup himself. And is trying to speak more.

⌘ In the Netherlands we now have a Children’s holiday called Sinterklaas. Similar to Santa. It is cute for kids though Merijn is really too young to really understand it yet. But we went to see him arrive on his ship here in town and he has received some gifts in his shoe.

⌘ We also had his check up and while he is doing really well physically they made me feel like he is behind on talking…. I mean he can say yes, no, mom, dad. In recent days he can point and say that (In dutch die). I know I shouldn’t worry. He’s smart and has been quick with most things. So what if he maybe is slower with talking. He’s only 15 months.

⌘ Every Wednesday morning there is a book start mornng at the library from kids from 0-4. For more explanation on book start, I wrote about it here. We went on the last Wednesday of November. It was a theme morning for Sinterklaas so there was no reading to the kids. It was so loud and so busy. Merijn isn’t used to that or to other kids so he was very over stimulated. As was I. Even so I do think it is good for him to go more often so I think we’ll do that.

⌘ I know I need to get through the posts that still have bad links for the photos but I still don’t quite feel it. I know I should but I also don’t want to do it half assed and leave all posts empty of photos. So I think I’m going to leave it to next year and just make a schedule for it.

⌘ I was suppose to head up my parents for the week of the 28th of November as they would be working on our toilet. But the toilet work got pushed back two weeks so now I am going to my parents December 11th. Which is okay too I guess. 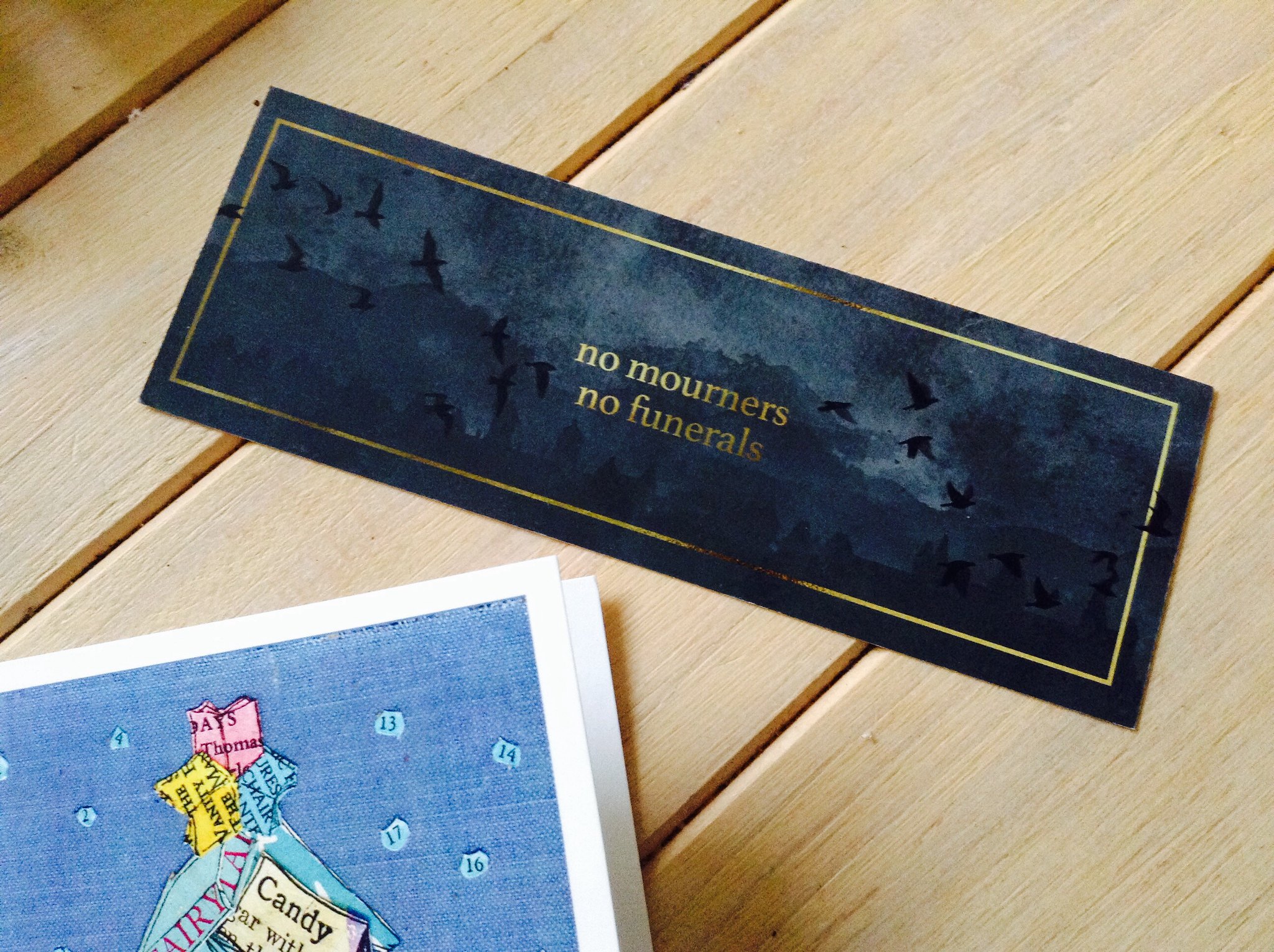 Starting in 2018, @goodreads is going to charge authors/publishers for giveaways and make them US only. There are two tiers: standard ($119) and premium ($599). #goodreads

⌘ Have you seen this? I find this such a sucky things for goodreads to do. Not so much for me since I rarely enter goodreads giveaways but for the indie authors who seriously can’t afford this.

Other Posts
Book Haul #25 – September and October // Dancing out of October 2017 // Books With Adaptation I’ve Seen And I’d Still Like to Read // I Dare You! // I, Robot – Would I Leave My Son in the Care of a Robot? // Online Bookish Merchandise by Dutch People // Review Slump – Do You Review All Books?

⌘ Once Upon a Time in Wonderland / Season 1 / Episode 6 – 8
Not sure if I like where this is going with the Knave. ._. Will is literally the best thing about this show.

⌘ Once Upon a Time / Season 5 / Episode 12 – 23 / Finished
We finally finished this season. I can really tell that we both aren’t as into this world and these characters. A lot of things just make me roll my eyes and the addition of story at the end didn’t make me happy at all.

⌘ American Gods / Season 1 / Episode 2 – 4
This is still weird but I like Shadow. I just like his actor a lot and the faces he can pull. He can look so exasperated. It follows the book reasonably well.

⌘ The Flash / Season 2 / Episode 1-16
I like this show but the cross overs with Arrow I find a little annoying. We don’t watch it and it just creates confusion when they add in side characters from that show too or references. Also the arc was just weird and didn’t feel fitting for the Flash.

⌘ Scooby Doo: Shaggy’s Showdown / Movie
Honestly this movie felt like a bit of a let down. I wasn’t feeling some of the characterization in this one, particulary of Velma

⌘ Scooby Doo: Curse of the Lake Monster / Movie
This is the sequel of the teen live-action movie. It was okay. Very predictable

⌘ Scooby Doo and WWE: Curse of the Speed Demon / Movie
This was a bit better than Shaggy’s Showdown. I am not familiar with any of the WWE though as a Dutchie but it was mostly entertaining.

⌘ Thomas & Friends: The Great Escape / Movie
When I wasn’t feeling so great I watched this with Merijn instead of going outside. Surprisingly he actually kept his attention to it somewhat the first 30 minutes or so.

⌘ Wonderwoman / Movie
We finally watched Wonderwoman and I was a little underwhelmed maybe? Some of the fight scenes didn’t do that much for me and whole love in the middle of the war, you know. And maybe I missed a bit more humor. Even so I’m still glad this movie was made. It is important to have more female superhero movies.

⌘ Skyrunners / Movie
This was a sci-fi movie on Disney XD. It was okay.

⌘ Kristen from Metaphors and Moonlight talks about wanting more books about disability and medical needs in post-apoc worlds.
⌘ Wendy from Falconer’s Library talks about whitewashing covers.
⌘ Cat from Let the Pages Reign discusses the (perceived) hierarchy of queerness.
⌘ AJ from Read All the Things discusses how a book gets five stars from them. They also ask us to choose from the 8 Harry Potter presiden candidates for when Trump gets impeached. 😀
⌘ Shannon at It Starts at Midnight shares the seasons of book blogging.
⌘ Mishma from Chasing Faerytales shares a list of what YA needs to get right about teens.
⌘ Cait from Paper Fury tells us why the bookworm life is so exhausting.
⌘ Sarah from Dragon and Zombies shares a list where the book titles are taken quite literally…
⌘  Jamie from The Perputual Page-Turner shares a gift guide for those Harry Potter lovers in your life. And shares how she plans for the new year.
⌘ Dragonfly at our Familiarium shared her best and worst books through premise and theme!
⌘ Evelina from AvalinahsBooks discusses why we might find it hard to get into Sci Fi.
⌘ Austine from Novel Knight talks about Beat the Backlist 2017, feedback and the changes for Beat the Backlist 2018.
⌘ Ely from Tea and Titles is going to make a Q&A about diabetes so if you have any questions, please send her some. 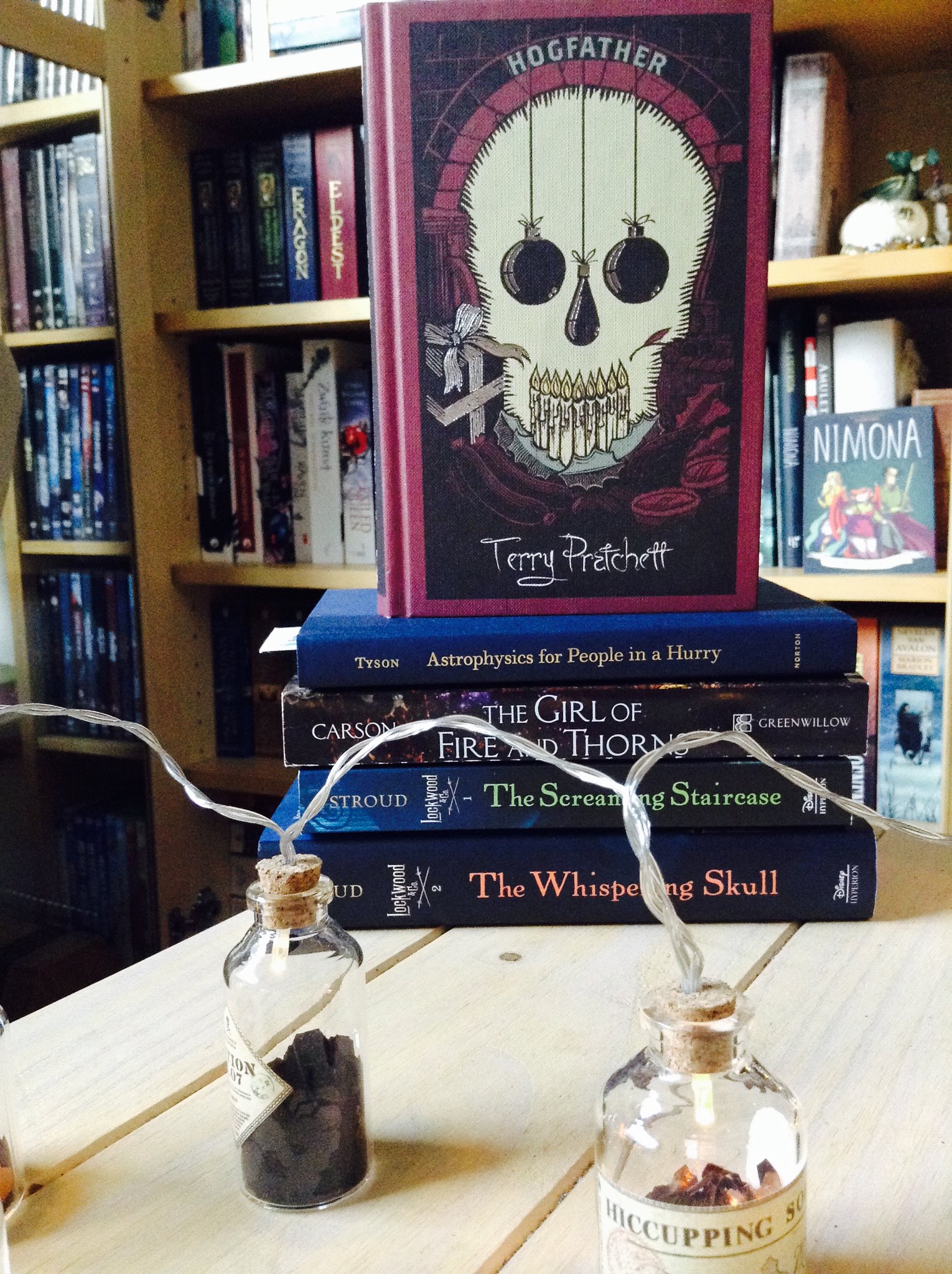 ⌘ On December 3rd we’ll be celebrating Sinterklaas at the inlaws (which is the day this posts) so I am curious to see how that goes with Merijn as it hasn’t really sunk in with everyone that we actually have a kid this year that sees them opening gifts. I’ll be heading up to my parents for half a week at December 11th so I probably won’t read much. We’ll be staying at home this year for Christmas for the most part I think so I might get some reading in… We don’t even have plans for New Year’s yet. What are your plans for Christmas?

⌘ Reading wise I have a lot of books I’d like to get to. Some review copies. Rereading some Jonathan Stroud books. And Hogfather. And The Bear and the Nightingale maybe. And I am also buddy reading The Girl of Fire and Thorns this month so yeah…