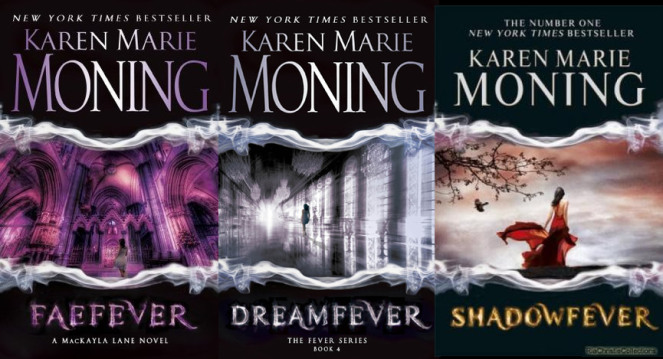 Other books in this series I reviewed
Darkfever / Bloodfever

He calls me his Queen of the Night. I’d die for him. I’d kill for him, too.

When MacKayla Lane receives a page torn from her dead sister’s journal, she is stunned by Alina’s desperate words. And now MacKayla knows that her sister’s killer is close. But evil is closer. And suddenly the sidhe-seer is on the hunt: For answers. For revenge. And for an ancient book of dark magic so evil that it corrupts anyone who touches it.

Mac’s quest for the Sinsar Dubh takes her into the mean, shapeshifting streets of Dublin, with a suspicious cop on her tail. Forced into a dangerous triangle of alliance with V’lane, a lethal Fae prince, and Jericho Barrons, a man of deadly secrets, Mac is soon locked in a battle for her body, mind, and soul.

At the end of July I decided I wanted to finish the Mac story, the first five books of the Fever series. I had three more to go so I read them back to back. This is also the reason why I am reviewing them together. I won’t go into the plot specifics too much as I know the first two books give little away about it and I don’t want to spoil anyone.

Honestly, I am not sure I know how I feel about this series. There is so much to like about the series. It takes place in Dublin which I think is great. I’d like to visit there someday. But there is also of course the paranormal element of the Seelie, Unseelie and the Sidhe-seers. I like the idea that is created around these. But I do think the focus was too much on the sex front sometimes for the Seelie. There has to be more to them than that. We do get some of that but not entirely enough for my taste.

As far as the plot goes. The first four books were around the 300 pages. But the fifth book was suddenly around the 500 pages. This was because there was more information in that book. Obviously because we get all the answers. But if I compare it to the first three-four books I wish we had gotten some of that in those. More hints on Barrons, more information about the sidhe-seers. This was my complaint with the second book, and while we did get some more answers in the third and fourth, not enough and it left me feeling annoyed.  Having said that, I did not expect some of the things we did get in the fifth book. Regarding Dani, Mac, the Fae. So certainly Karen Marie Moning knows how to surprise me.

We meet Dani in the second book and she becomes a bit more important throughout the other book. However I don’t think the random injected chapters by her in book 4 and 5 were necessary. They did not flow at all with how Mac was telling the story.

But my biggest complaint is the rape, the forced physical interactions Mac has to undergo. Especially in the fourth book we get a lot of mentioned rape. I do not think Mac needed that to have an altering arc in her life. Rape shouldn’t be a plot device like this. I suppose this is because of the sexual nature of the fae, but even so it was unnecessary.

I have a lot of complaints regarding this series, but Karen Marie Moning did manage to capture my attention with the world. And her writing in general flows incredibly well. I read so fast through these books.