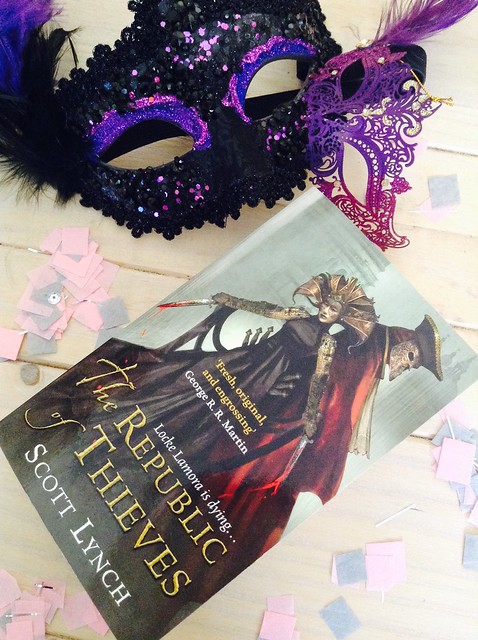 With what should have been the greatest heist of their career gone spectacularly sour, Locke and his trusted partner, Jean, have barely escaped with their lives. Or at least Jean has. But Locke is slowly succumbing to a deadly poison that no alchemist or physiker can cure. Yet just as the end is near, a mysterious Bondsmage offers Locke an opportunity that will either save him or finish him off once and for all. Magi political elections are imminent, and the factions are in need of a pawn. If Locke agrees to play the role, sorcery will be used to purge the venom from his body – though the process will be so excruciating he may well wish for death. Locke is opposed, but two factors cause his will to crumble: Jean’s imploring – and the Bondsmage’s mention of a woman from Locke’s past: Sabetha. She is the love of his life, his equal in skill and wit, and now, his greatest rival. Locke was smitten with Sabetha from his first glimpse of her as a young fellow orphan and thief-in-training. But after a tumultuous courtship, Sabetha broke away. Now they will reunite in yet another clash of wills. For faced with his one and only match in both love and trickery, Locke must choose whether to fight Sabetha – or to woo her. It is a decision on which both their lives may depend.

Red Seas Under Skies left us with a massive cliffhanger. What would become of Locke, poisoned? In exchange to be saved they strike a deal with one of their enemies and are taken into Kathrain. 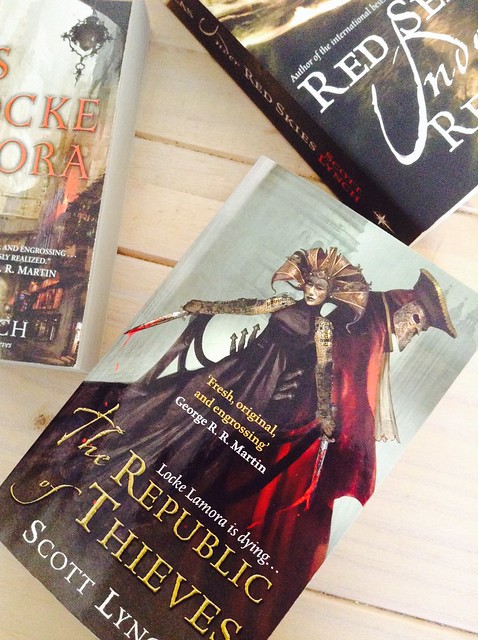 The Republic of Thieves takes us into two different parts of this world and more and more we get an understanding of how this world truly ticks. Plot wise we follow Jean and Locke into Kathrain where, for the price of Locke’s life, they have to immerse themselves in dirty politics. But like the other books, this books also has an interlude line which interchanges between the current and past. It follows how Locke met Sabetha and moves into small different plot with theatres. I’ll be honest and say while I found the start to the interlude great to read, as we hadn’t gotten Sabetha in interaction with everyone and it was great to see Galdo and Calo again, this plotline lost interest to me when it moved into a small story of itself where they would be acting a play called The Republic of Thieves. Some of the current plot chapters would end in cliffhangers and then there would be an interlude chapter. I found this extremely irritating and I would catch myself skimming some of the play. It took the tension out of a plot that wasn’t quite as life and death as the previous two books to begin with.

Still overall I enjoyed reading this book a whole lot. Locke and Jean are just great to read and follow about. I love how Locke desperately and always sticks up for Jean no matter who picks at him. Even if it is Sabetha. There is such a loyalty between those two. I have so much feels for these two.

This book gives us a character that we and Locke have been pining after for 2 books and 5 years. Sabetha. I don’t know about any of you that have been reading this series but I was getting kind of sick of not knowing Sabetha after the second book and I would have probably stabbed the cover of this book had we not gotten her.  The tension between Locke and Sabetha created an interesting line throughout the book.  I’m not entirely sure how I feel about Sabetha. I don’t always agree with how she treats Locke. On the other hand, as we learn her background a bit more I do understand where she is coming from. I just don’t understand why she has to over complicate everything. Still she is a strong woman who takes no shit for no one.

‘Well damn, you are obviously in a mood.’
‘Am I?’ There was danger in her tone.  ‘Am I really? Why should that be exceptional? A boy may be as disagreeable as he pleases, but when a girl refuses to crap sunshine on command the world mutters darkly about her moods.’

We refuse to crap sunshine on command boys! These kind of things is what made me like Sabetha more than half of the time.

The epilogue there clearly shows that crap is still going to be raining on our boys soon. In the backdrop we also got some information about the situation in the world and I feel like we are heading towards a more overarching arc in the next few books. I am very curious where this will all be heading as Scott Lynch does like to keep us guessing.

14 thoughts on “Book Review – The Republic of Thieves”