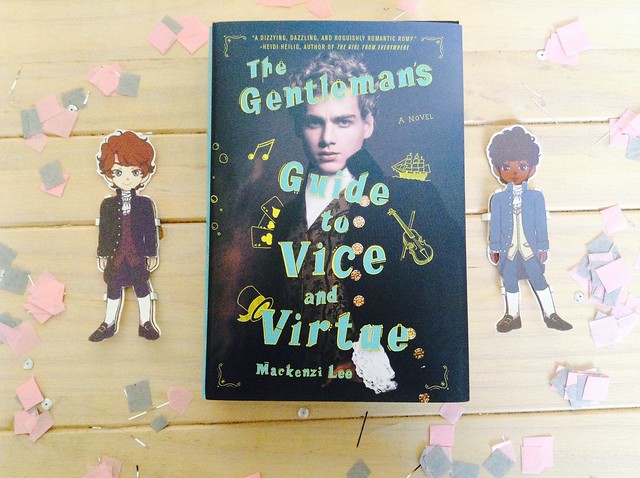 Henry “Monty” Montague was born and bred to be a gentleman, but he was never one to be tamed. The finest boarding schools in England and the constant disapproval of his father haven’t been able to curb any of his roguish passions—not for gambling halls, late nights spent with a bottle of spirits, or waking up in the arms of women or men.

But as Monty embarks on his Grand Tour of Europe, his quest for a life filled with pleasure and vice is in danger of coming to an end. Not only does his father expect him to take over the family’s estate upon his return, but Monty is also nursing an impossible crush on his best friend and traveling companion, Percy.

Still it isn’t in Monty’s nature to give up. Even with his younger sister, Felicity, in tow, he vows to make this yearlong escapade one last hedonistic hurrah and flirt with Percy from Paris to Rome. But when one of Monty’s reckless decisions turns their trip abroad into a harrowing manhunt that spans across Europe, it calls into question everything he knows, including his relationship with the boy he adores

Oh my gosh I don’t even know what to say of this book. I tore through this 500+ young adult historical novel so quickly. But I suppose my rating is a hint at how well I loved this book. The Gentleman’s Guide to Vice and Virtue is set in the 17th century but don’t think for a minute that means you are getting stuffy white aristocrats in this book. This book is funny, entertaining, diverse and incredibly fast paced for the thickness of the book. Mackenzi Lee has a way of writing that just makes you want to inhale every word as fast as you can. There is just so much anticipation that runs throughout the book even though I was not always surprised with the turn of events. I am happy I have another book of hers on my shelf still to read. Our main character is Monty. He is quite the free spirit or he would like to be in any case as he really feels the pull of all those weights tugging him down to the bottom of the sea. Unfortunately for those surrounding him that is all he sees. His own problems. Regardless of his acting out he is still an endearing idiot because he does honestly care for those closest to him like Percy and he just wants to be happy. His relationship with his sister is somewhat strained but seems to become better somewhat over the course of the book.

Percy is another character that has so much to love. I don’t know how he puts up with Monty sometimes when he is drunk, haha. Being poc in the 17th century, grown up around lords and lies, is not easy and the book points these things out and makes it clear they aren’t okay. The same goes for his epilepsy and how that is still often regarded in that age. I also loved the authors explanation at the end to put things more in context for us.

Felicity is the last of the trio of travelers and Monty’s sister. Everyone was shouting beforehand how they loved Felicity and often that tends to mean I don’t (I had this with Lila in ADSOM initially). However I became quite taken by this young and smart girl that wants nothing more than to break free from these restraining bonds placed on females. That she had her nose stuck in a book most of the time also helped. I can’t wait on her book that is coming next year.

Honestly the plot becomes thirdly to these characters coming of age and the way that this book deals with the way poc, disabled and homosexuals are treated in the 17 century.  But it certainly helped. It was great to go across 17th century Europe like that and see a little of how familiar places are during that time without focusing too much on it which I can sometimes dislike about historical fiction.

Huh I guess I did have something to say about this book.