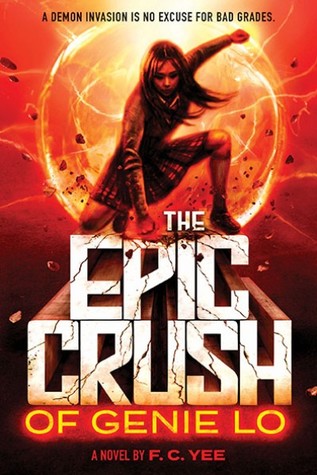 Thank you to Netgalley and the publisher for this review copy in exchange for an honest review.

The struggle to get into a top-tier college consumes sixteen-year-old Genie Lo’s every waking thought. But when her sleepy Bay Area town comes under siege from hell-spawn straight out of Chinese folklore, her priorities are suddenly and forcefully rearranged.

Her only guide to the demonic chaos breaking out around her is Quentin Sun, a beguiling, maddening new transfer student from overseas. Quentin assures Genie she is strong enough to fight these monsters, for she unknowingly harbors an inner power that can level the very gates of Heaven.

Genie will have to dig deep within herself to summon the otherworldly strength that Quentin keeps talking about. But as she does, she finds the secret of her true nature is entwined with his, in a way she could never have imagined…

If you look at the rating of this book on Goodreads it will give you a good indication of what this book does to people. So many people seem to instantly love this book. As did I. Like I do not even remember words because I loved it so much.

The Epic Crush of Genie Lo focuses on Genie Lo, who else. She discovers that the Monkey King from Chinese folktale actually exists, along with a bunch of Gods and demons. And about herself, that in a previous life she wasn’t quite so human. The setting, a city in the Bay area, with our main character in high school, it is on the stereotypical side. And throughout the book it touches on multiple typical Young Adult things.

However the voice of Genie Lo throughout this book is epic. She’s funny, in your face and not afraid to tell a guy off when they are being condescending. This made this book step away from the typical young adult urban fantasy for me and made it grow into an epic tale of Genie Lo. I love good humor in a book and Genie left no moment go to waste to crack a smile on my face. Yet in no way does it take away from some of the serious bits in the novel too. Honestly it has been a while where I have read a young adult book where applications to college are a big thing. While I live in a country where this isn’t a thing, in America it is a big thing and so it is good to see it come back like that.

‘He was prodding a corpse. My soul had left my body a long time ago. It had flown to the top of Mount Can’t Even, planted its flag, and dissipated into the stratosphere.’

Another aspect that I enjoyed about this book is that most of our characters are Chinese. As mentioned we get to know some of the Chinese folktale or mythology. But also a bit of culture here and there. The friendships that Genie had, with Yunie for instance, was so great and strong. Quentin was a great dork addition really. Also I love how in the background her parents problems weren’t resolved. Not because I disliked them but because that is just realistic. And very recognizable for plenty of people.

Plot wise this book takes a little bit before the actual mythology parts gets entered but for the most part the book is fast paced and engaging. For me, the plot took a backseat to the humor and the characters who were so much more important in this book than the plot. Even so I think it stands well on its own. And did that ending suggest a possible next book? Because honestly, F.C. Yee, you cannot end it there. I will wonder forever.

17 thoughts on “Book Review – The Epic Crush of Genie Lo”