While we do have a lot of movies in our house I am not the biggest movie watcher. My husband is and our collection is mainly his. I have always been more interested in tv shows were there is more time to develop characters through story arcs and where I can really get a feel for the relationships among the characters.

However there those few movies that I do love and can rewatch so many times. And it might surprise the regular reader that these aren’t all fantasy or sci-fi movies. I know, right?

Top Ten Tuesday is a weekly meme where The Broke and the Bookish provide us with a prompt. This week we got a movie freebie.

⌘ Pirates of the Carribean
I must have re watched this movie 50 times by now, though more so when it was first released than I watch it now. But I still love this and I always had a love for Johnny Depp (much less now that I’ve been hearing things about abuse to his ex partner).

⌘ Stand By Me
This is a movie I once saw when I was sick at home from high school and nothing was on. This is not a movie I would have watched otherwise, but I am glad I did. Because I love this tale of friendship between these boys and to hear their stories of hardships. I was so sad about the ending I almost cried. I recently learned this is actually based on a short story by Stephen King (though I can’t remember which bind-up of short stories it was in anymore). I had no idea.

⌘ Winter in Wartime
This is one of the first movies I watched with my husband in the theatres. And we we’re both very excited about this one. It is a movie adaption of a Dutch children’s book called Oorlogswinter (Winter in Wartime) by Jan Terlouw. We both read that when we were younger.

⌘ Despicable Me
I love animation and Gru, the girls and the minions make me laugh so hard. I thought the second one was a lot less though and while The Minions movie certainly was very entertaining, it doesn’t quite match up to this one for me. Aren’t first movies often the best?

⌘ Ice Age
Ah Ice Age. I love love love the interactions in this and how they have created a family. I always re watch this at least once a year around Christmas.

⌘ Shrek
And the same goes for Shrek. Got to love this weird family thing they have going on at some point in the series of movies.

⌘ Serenity
Serenity is a movie tie in to Firefly and of course I love this. I love Firefly. But I was not happy with you Josh Whedon. You don’t get to pull at my heart strings like that. *snuggles her Jayne funko* 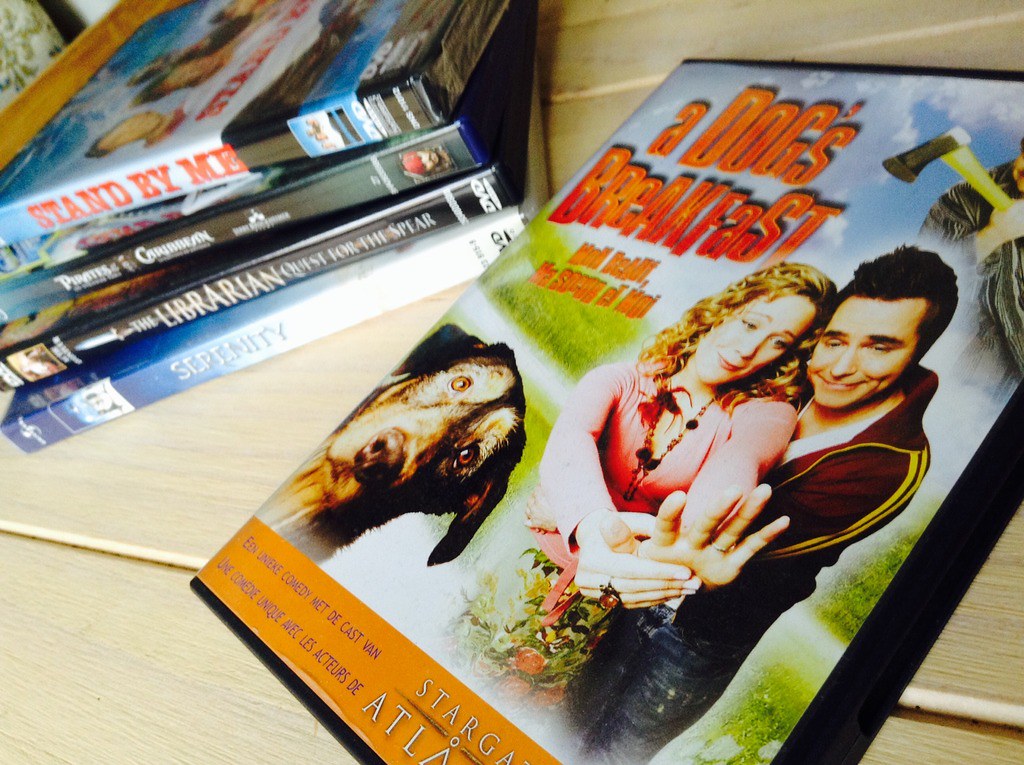 ⌘ A Dog’s Breakfast
Have to love this title, right? This movie was made very low budget by David Hewlett in a cabin in Canada I think, and he stars in it himself. David Hewlett is the actor who plays McKay in Stargate, of course. I love McKay and I love seeing this actor so when I heard of this movie I had to have it. It has a few other Stargate actors in it as well, including his own sister. And it cracks me up so much.

⌘ The Librarian trilogy
Ah the cheese in this. But I still love it. These are the movies the series The Librarians has been spinned off. Have to love Noah Wyle. I swear, when I was younger I had the biggest crush on him, haha.

⌘ Harry Potter
I know,  I know, they have their flaws. But I’m too lazy to keep rereading the books for my fill of Harry Potter five times a year.

⌘ Lord of the Rings
Another I know they have their flaws, but I hadn’t read the books before watching the movies and I do love the grandeur of them. There are very little fantasy movies that give of this true high fantasy feel you know. Most just don’t get that budget.

What are some movies you love to re watch?